I'm lucky enough to live in St. Andrews, where not only do we have a world famous golf-course, and several others, but we are allowed to walk on it every Sunday, and DRY OUR WASHING ON IT should we wish. I didn't fancy taking the washing down as I would have needed the car to carry it and that would have broken the rule that you can't take your car for exercise, even if the poor thing is sitting pining in the garage threatening to flatten its battery if you don't take it out.

Below, Band Stand. Usually a few summer concerts, but deserted today and probably most Sundays, virus or no virus 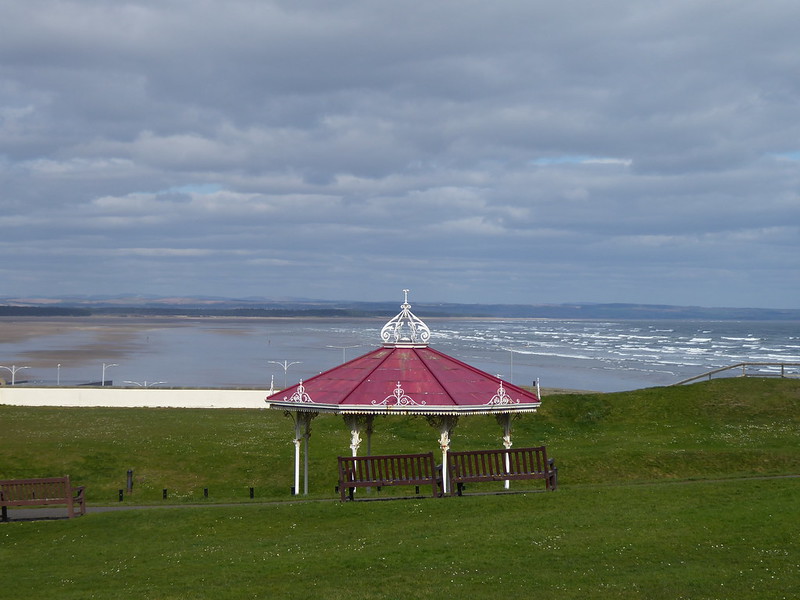 Below, the West Sands, none of the usual chip eaters on the benches with attendant opportunistic seagulls 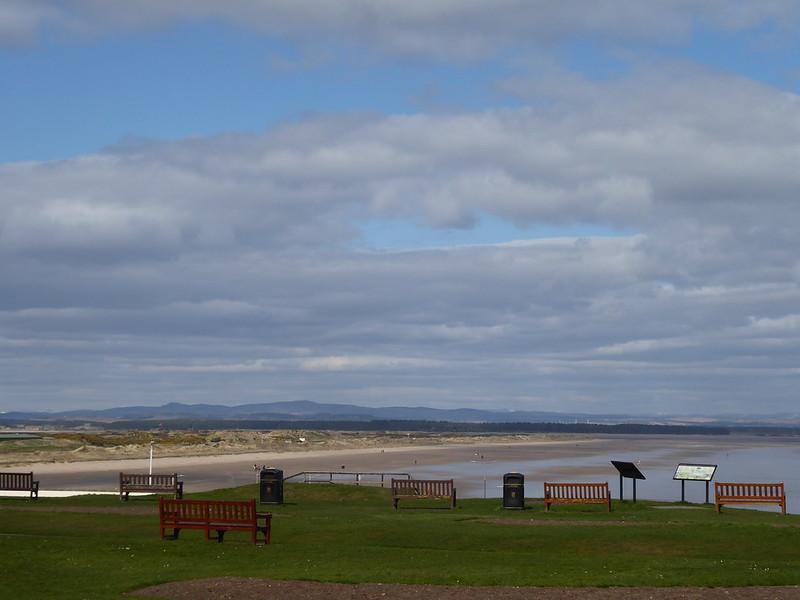 It always gives me a strange feeling setting foot on the Old Course, as if the starter will come running across and stop me. 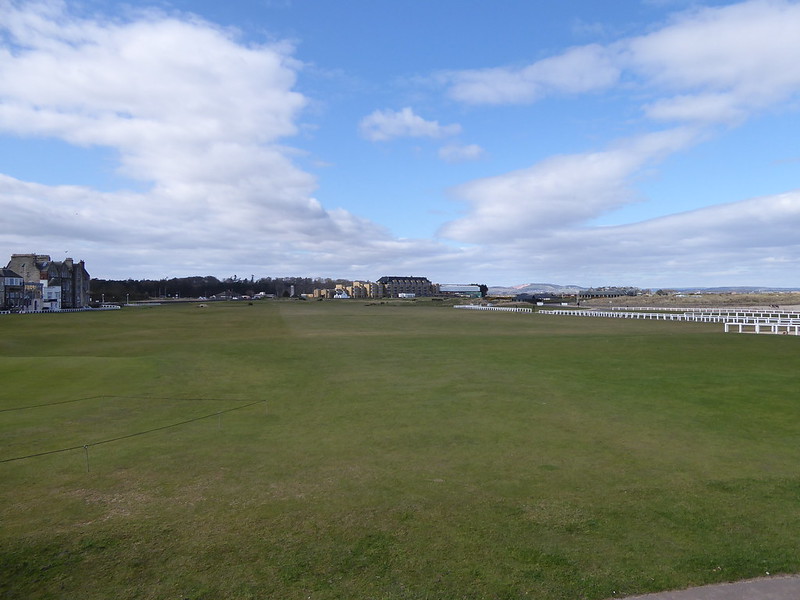 Looking back. I can't find out what is happening here, except they are at last putting in a changing room for women members as part of a wider refurbishment" 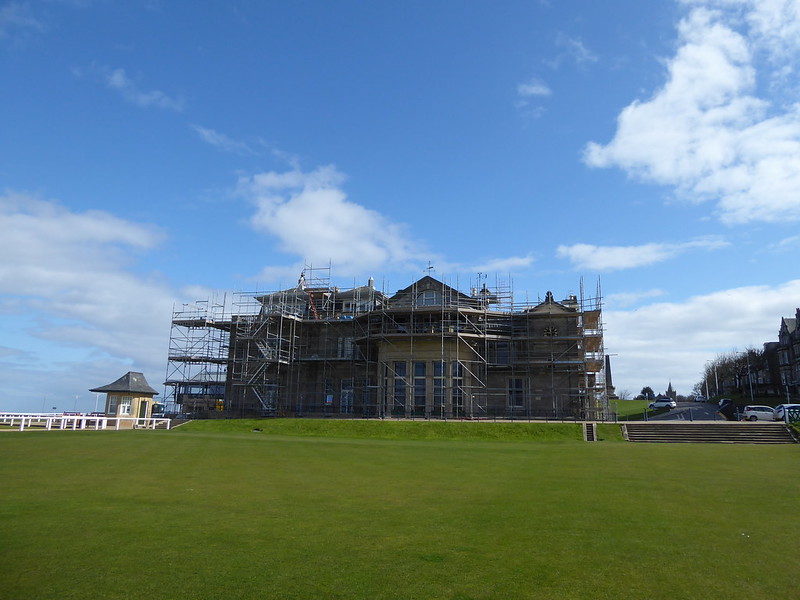 Things have changed since I first came 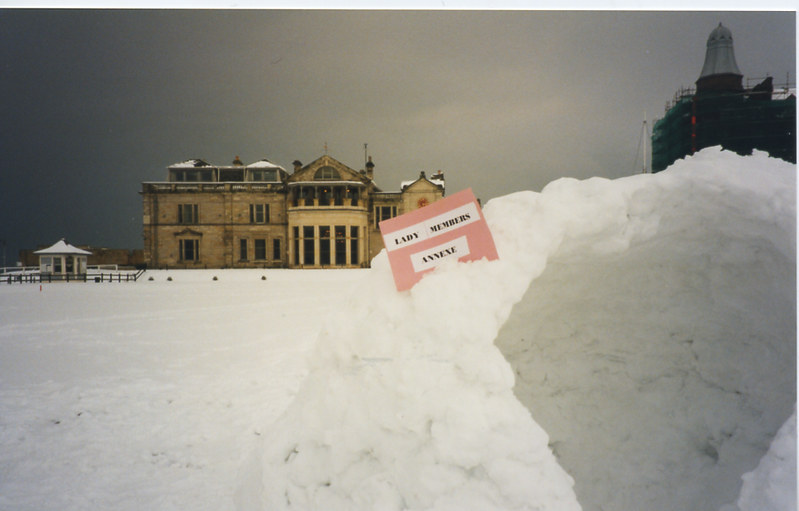 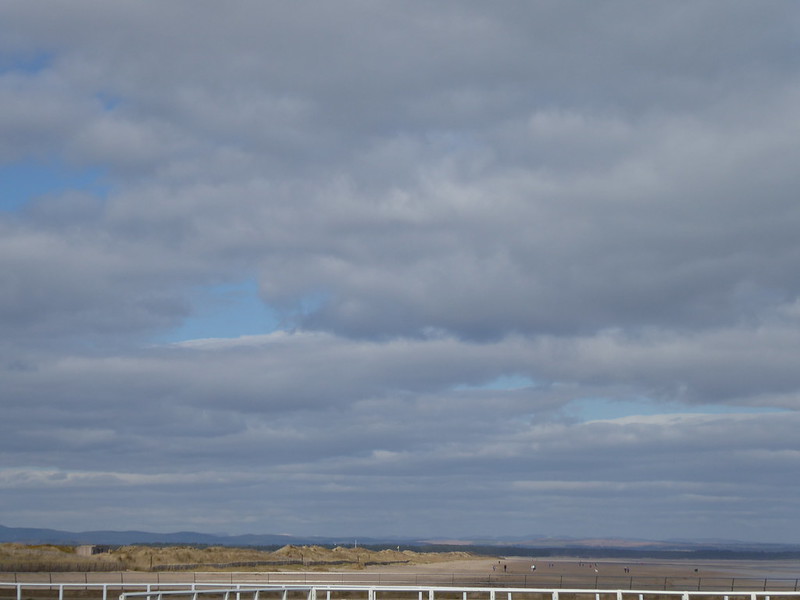 Below, local riders often exercise on the beach 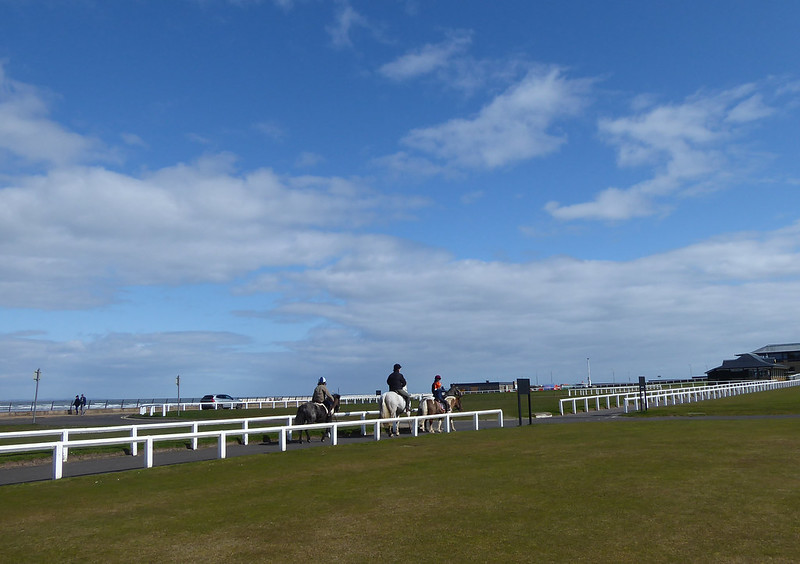 That is a public road, right across the first and eighteenth holes. Except in tournaments pedestrians are just advised to keep an eye open. 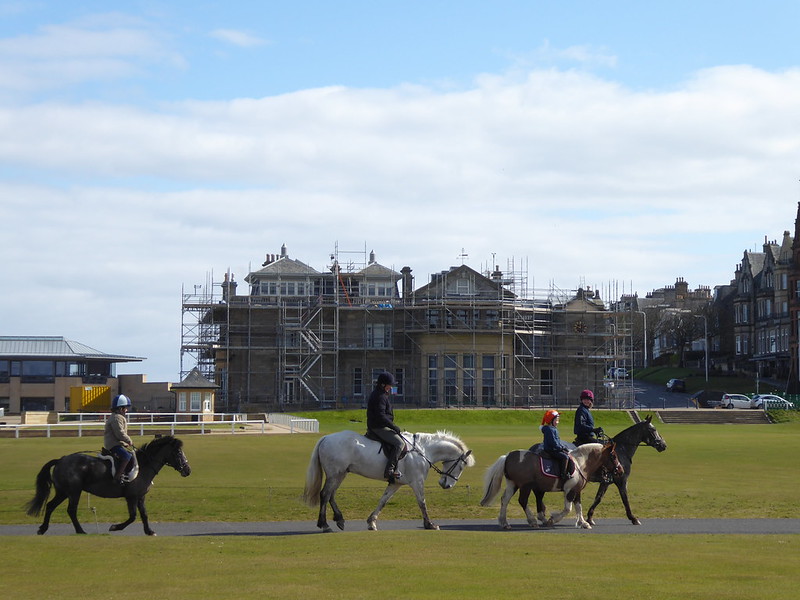 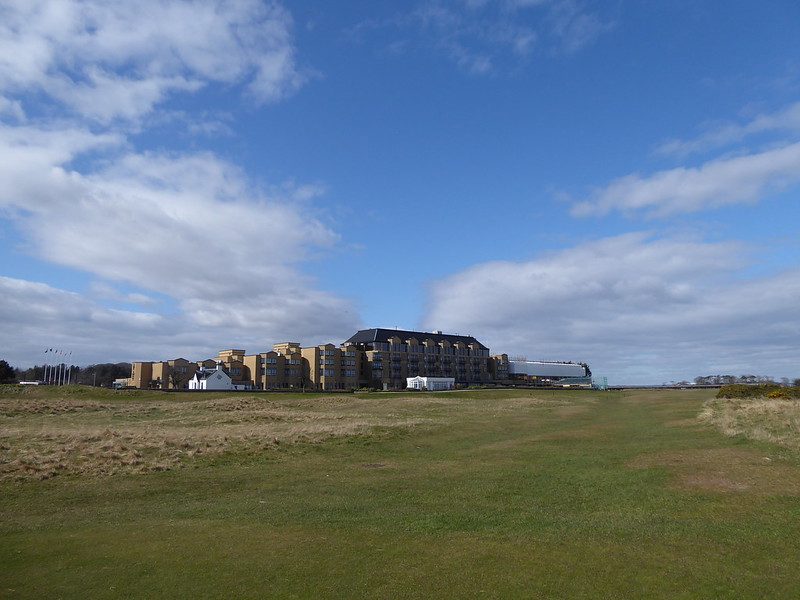 Luckily, I don't have to pretend to know anything about golf any more. These bunkers have names, but if I ever knew them, I have forgotten them. They don't look friendly. 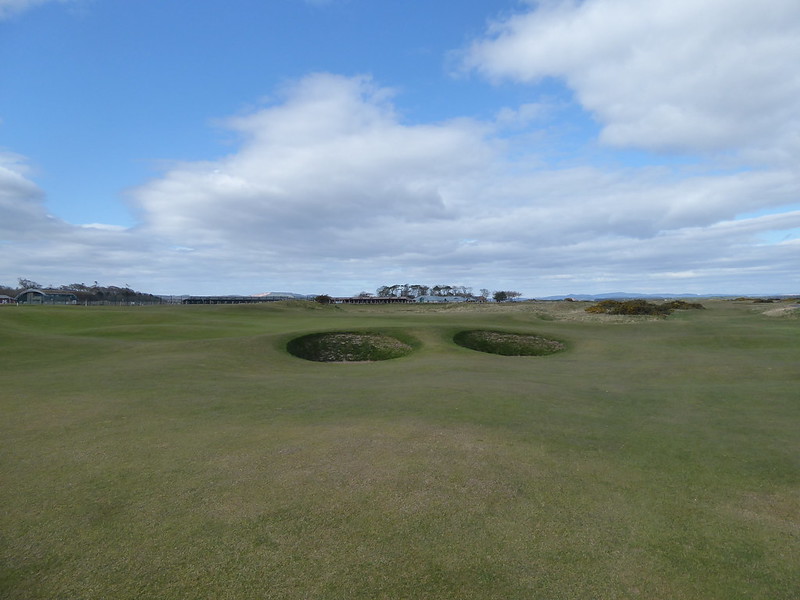 Fitbit steps as far as the eye can see 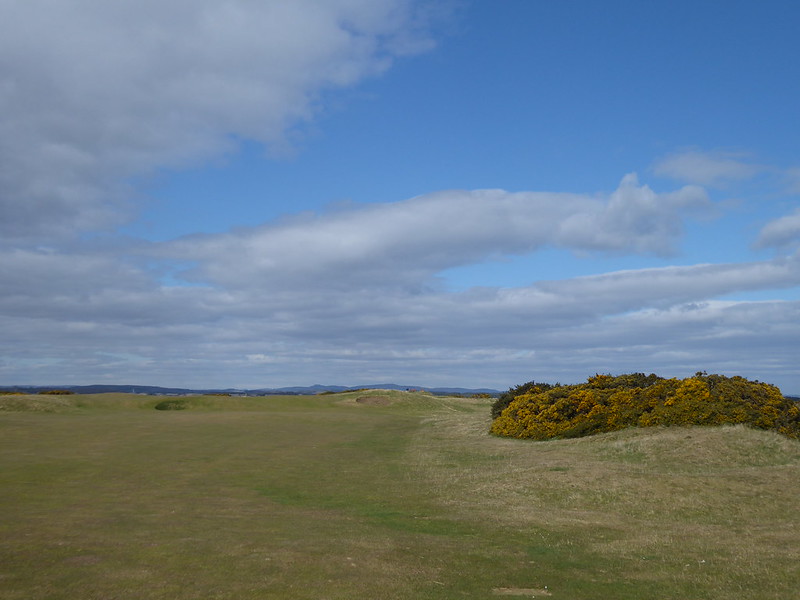 Below. Words fail me. Whoever left this on the hallowed turf would, if anyone knew who it was, have an entire article written about them and published on the front page of St. Andrews Citizen Thanks to the internet, simply leaving town for ever would not conceal their shame. 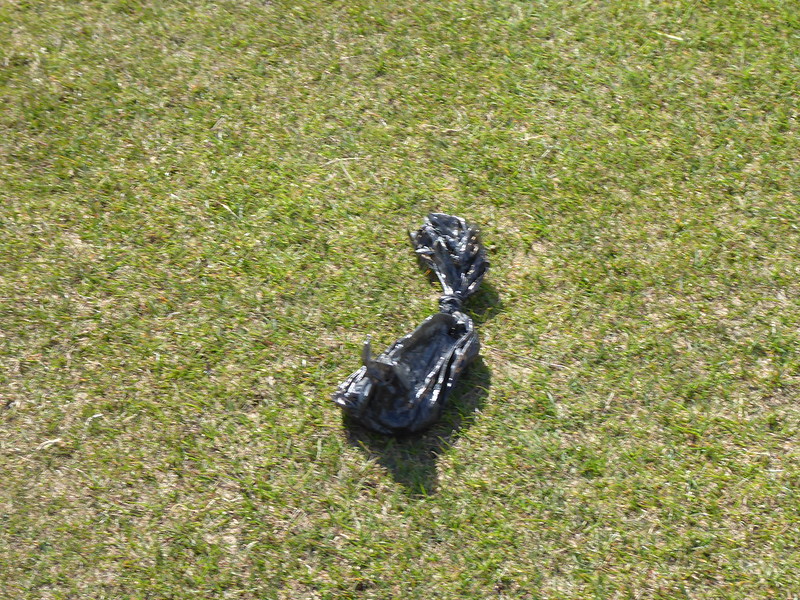 Below The Eden estuary 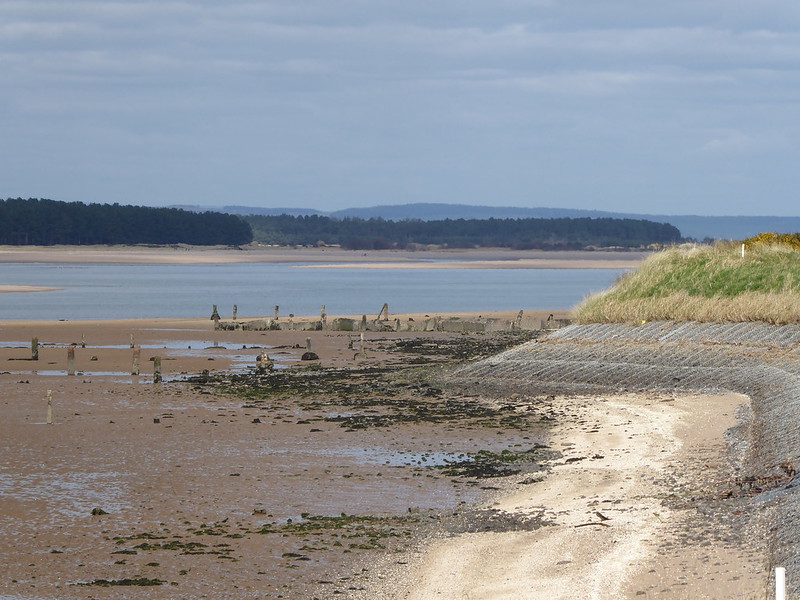 Here we turned round and wandered back more or less the same way, failing to locate the notorious seventeenth(road) hole, and not being bothered to go and pose by the Swilcan Bridge, as that was the only honey pot location. People were inserting the imaginary barge poles between them and the next person, but had anyone fallen into the burn we would have felt obliged to go and pull them out, so here is one I did earlier 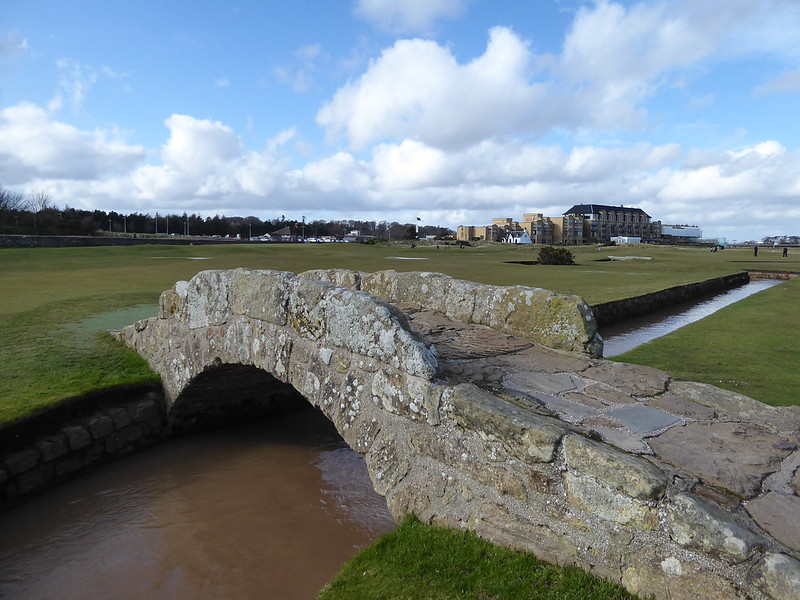 See how far we walked, you can barely see the town in the distance 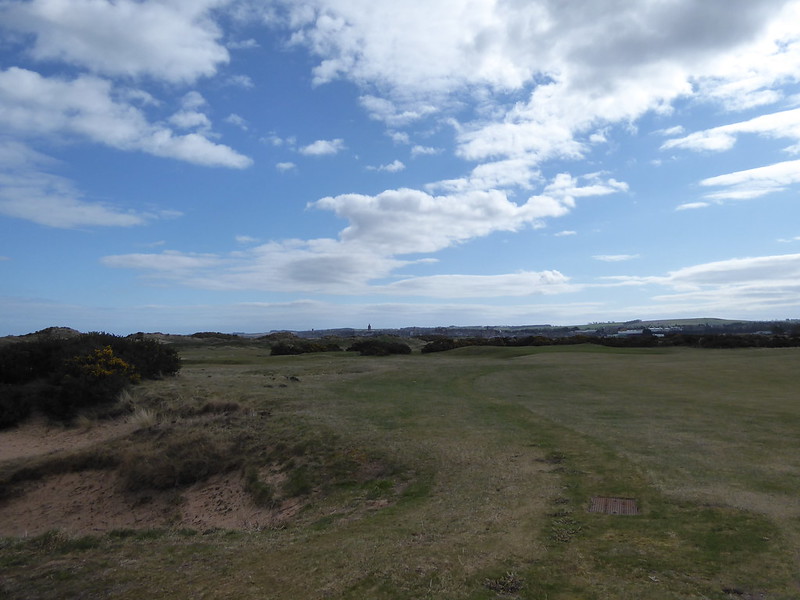 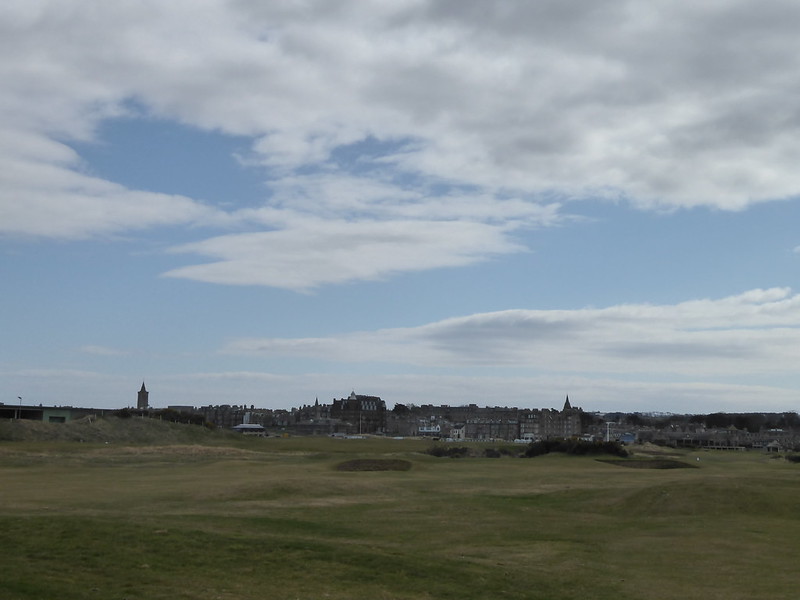 There are detective novels where the body is disposed of in a bunker, but the traffic here is usually far too great for the criminal to have time. One of the part-time life guards at our local pool is a full time groundsman, so I think I would have heard if it had happened. 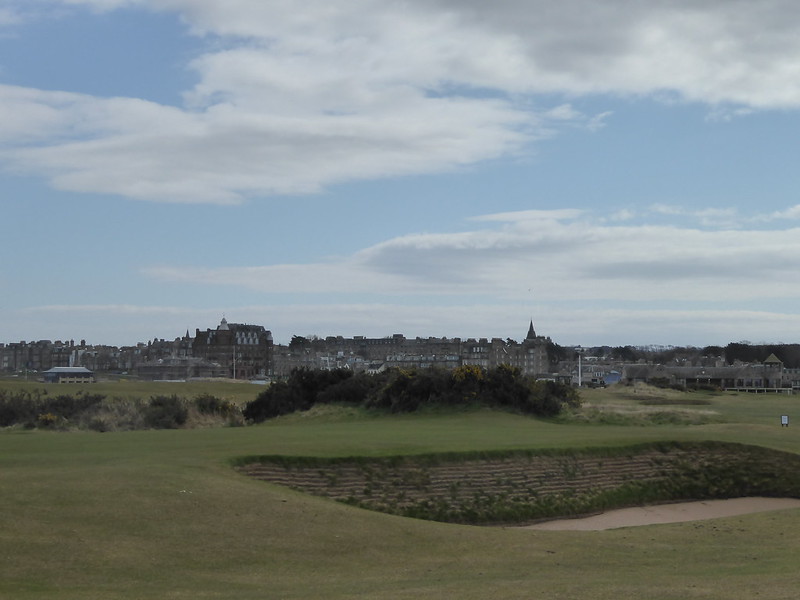 That big red building on the left used to be The Grand Hotel. I knew its last manager: in retirement they went camper-vanning round the Sahara. One night outside Algiers there was a knock on the door. "Thought we had better offer them something, make friends. Not booze, wrong religion....coffee. " In best St. Andrews coffee morning tone they asked them what they did "Since the revolution, we are unemployed." And before that? "We were terrorist." " Oh, and what form did your terrorism take? " Garotte," said their guests explaining how it had been their job to deal with the French guards and cut the wire so the ammo trucks could come through. Then one night the French electrified the wire. Their guest stripped off his shirt to reveal terrible burn wounds on his back. They shook hands and parted friends
After that the red building was a student residence which sports journalists would rent for major championships. Now it is luxury flats. I don't get to hear the life stories of their occupants as I did their predecessors. 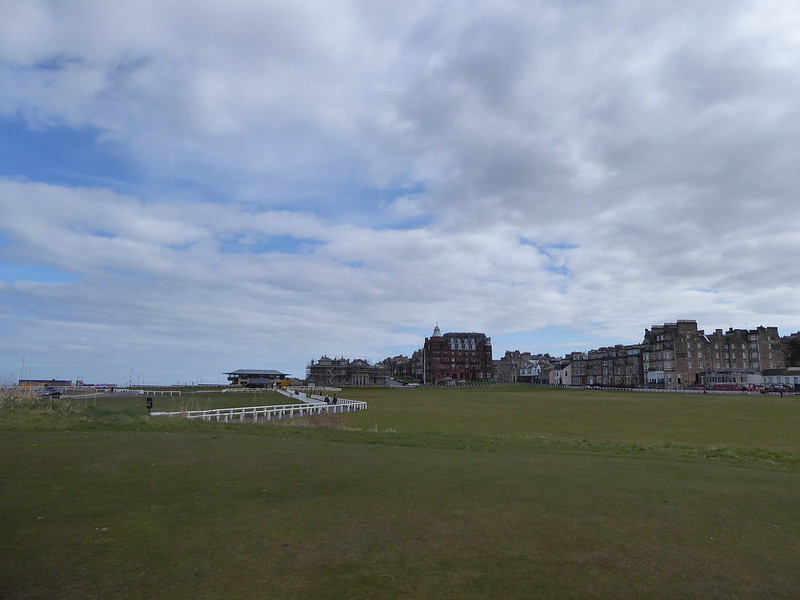 Below The Martyrs Monument. Memorial to the protestant martyrs of the Reformation.

Good to see you getting out, and I'm jealous of the open space; its mostly paths in woodlands and small open areas for me.

Have to say, some good tent pitches there

. You could even have a no-trace fire in the bunkers!!!

Great to read about your local area Sgurr.

In fairness to the dog owner there aren't any trees about so they can't leave the bag hanging from a branch so what option did they have???