On a quest to find the Kielder Stone (part 1)

On a quest to find the Kielder Stone (part 1)

I’d planed to visit this stone from a walk in an old borders walking guide that I’ve had from the early nineties. Over the years I’ve done almost all the routes in it, but the route to the Kielder Stone was one which I’d yet to do. Classed as a 12 mile moderate walk, I reckoned it should cause me no problems, but little did I know, it was going to be one of the toughest days out for me in the Cheviot Hills. Maybe back in the nineties this route would have been pretty easy going, but a total lack of walkers and grazing animals, meant that things were completely different today, being very overgrown with thick long heather, and total lack of even the slightest trace of a path, this was going to be a tough little challenge.

The planned route climbs to a viewpoint on Carlin Tooth, then following the Black Needle burn along the Scottish English border. Next it's a climb up Kielderstone Cleugh to arrive at the Kielder Stone. The return was to climb Peel Fell and drop back down to Wauchope Forest, entering the forest along forest rides to Wheelrig Head, then back along outward route...nice and easy, what could possibly go wrong?

My route started in Wauchope forest at a point known as Note o’ the Gate. I drove a short distance along the forest road towards Rushy Rig, where there is room to park at a junction. From here the walk begins, and I headed to the left to go around Rushy Rig. A good forest road was followed to Wheelrig Head making nice easy walking. Starting through Wauchope Forest on the way to Wheelrig Head

From there I left the track to follow a forest ride, there was still a lot of morning mist,

so it was an eerie walk onto Hartshorn Pike on the edge of the forest. Now it was simply a case of following the faint path along the ridge to Carlin Tooth, which provided a great place to sit and rest with what should have been excellent views had it not been for the mist. 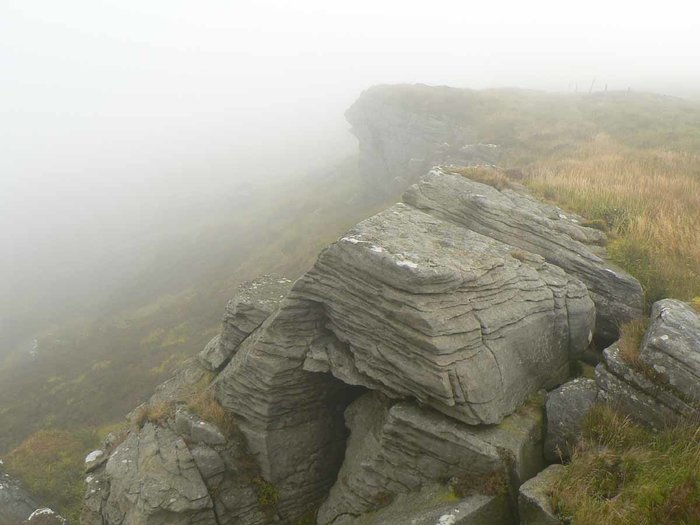 Source of the Black Needle

The stream itself was dry, at its source, so made a good footpath in places, but soon water started to flow and I’d to follow alongside switching from side to side to try to find the best route as the going got progressively worse. A view along the Black Needle, and already the going is getting tough

The undergrowth of heather was getting much thicker and longer as I continued, with some steep and uneven ground making the walking very slow and difficult. I thought that the going might get easier when I reached the Scottish English border just below Duntae Edge. The border usually has a fence which more often than not will have some kind of path alongside, even if it’s just a rarely used animal track. This was not to be the case here, no fence, and no traces of any path whatsoever, and things just got harder and harder the further I went. The Black Needle, which here, is the border. England on left, Scotland on right. Very tricky walking now!

It became horrendous and extremely slow going, the valley of the stream was becoming very steep sided, so very difficult to stick close to it. I tried higher up, and this was just as bad due to the thick heather vegetation. From here, on the higher ground, I finally got a good long view along my intended route, and I could see conditions didn’t improve at all whatsoever, and it looked a very long way to continue all the way to the Kielder Stone and up to Peel Fell.

On a plus, the mist had now completely cleared, and it had turned into the beautiful warm sunny day that had been forecast. A long look along my planned route. I was to follow Black Needle to the distant trees, then turn right alongside, to climb to the Kielder Stone. No chance, forget it!

It had taken 2 hours to walk 1.5 miles to here from Carlin Tooth, so I decided the best thing to do would be to retreat straight back up to Carlin Tooth, by the most direct route up the very heathery hillside. Climbing back to Carlin Tooth

The map shows an area of shake holes just to the left of Carlin Tooth, so thought it best to keep well to the right of these, as I was falling into small holes anyway on the uneven ground, and didn’t want to risk falling into a massif unseen sink hole.

As height was gained, the heather became less dense, so the walking conditions started to improve. Looking back down to the trees mentioned earlier

On reaching Carlin Tooth, for the second time, I was met with the most tremendous of views, looking right out over all the border countryside.

This in itself made my walk worthwhile, and again it was time for a long rest and my well deserved lunch break. The Scottish Borders from Carlin Tooth

From this superb viewpoint I retraced my route all the way back to the car. 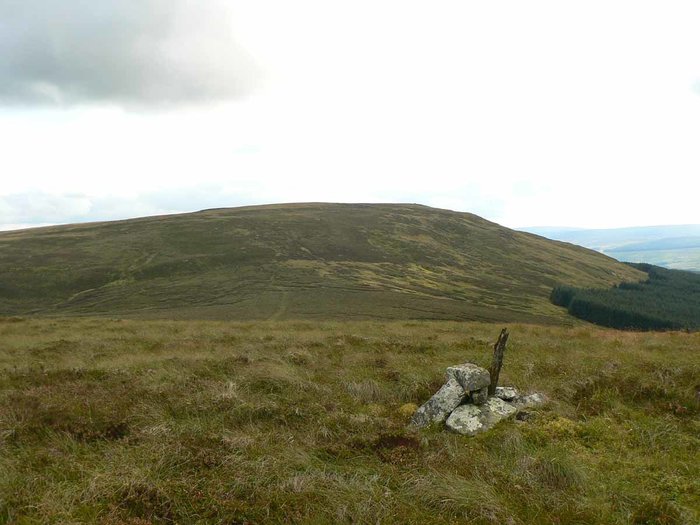 Heading back along the forest ride to Wheelrig Head. Not looking so spooky now

When I finally returned to the car, I discovered that someone had reported my car to the police as being left in the forest for a long time. So, the police had been trying to contact me to check if everything was okay. I called them and explained that I’d simply just went for a walk in the hills. Seems if I hadn't got in touch with them, they’d have sent in the search parties, but I got back just in time to prevent this from happening…great to know that if I’d actually fallen in one of those sink holes, someone would have been out looking for me.

This was part 1 of a 2 part trip to find the Kielder Stone, for part 2 click here https://www.walkhighlands.co.uk/Forum/viewtopic.php?f=9&t=96383