Although overshadowed by its more famous neighbours, Beinn Dearg is endowed with the claim to statistical fame of being the highest Corbett in Scotland; a tantalising 2997.5 feet according to a recent re-survey. It's a true Torridonian - well guarded by steep, craggy terraces and a narrow, castellated summit ridge that promises to test the nerve of part-time scrambles like myself. My previous 3 visits to the prehistoric majesty of Torridon had all been glorious days. My return 9 years later, to climb my 70th Corbett, would happily prove no different.

Since an April ascent in the Mamores I'd been absent from the hills, well-ensconced in weekend routine of children’s clubs, football games on the telly, the usual treadmill of household chores. Out of the blue a call came from Emil proposing a mountain trip, and fortunately a spell of early-autumn fine weather, focused on the west coast, was to coincide. Beinn Eighe from the road. Could've stopped 50 times for photographs on the journey

Leaving Deeside at 6 am Saturday morning, we headed over the Lecht and down to Inverness, with a brief stop for fuel and a coffee at Tore services, before heading westwards under pure blue skies and sunshine. As the grand peaks of Beinn Eighe and Liathach reared into view, it was tempting to stop every half mile for photographs that would grace any calendar. But with an ambitious plan for an afternoon ascent of Beinn Alligin after tackling the unclimbed Corbett, we pressed onwards to the busy car park a mile or two beyond Torridon village.

We set off at 10am with the rope in the rucksack, a precaution for what might await us high on Beinn Dearg. The outward footpath on the wooded east bank of the Abhainn Coire Mhic Nobaill was a delight of colour. Spots of lilac heather amongst the green bracken, transitioning to autumn orange, illuminated by the September sunshine filtering through the pines. 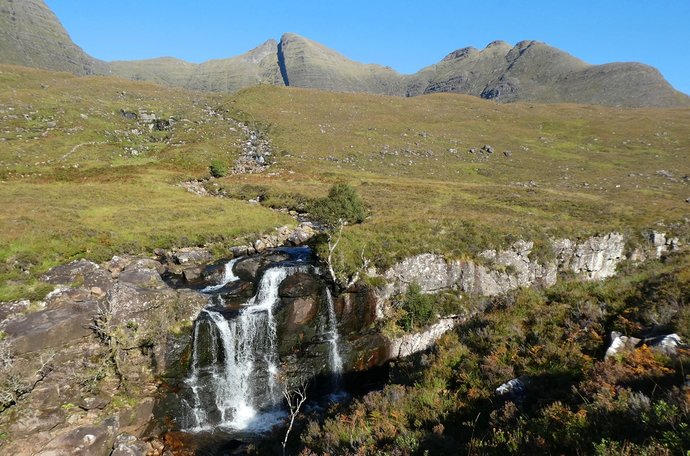 Such a beautiful approach route Our route up the south flank of Beinn Dearg

A mile of walking alongside the pools and riffles of the river took us across a bridge, where the path then split heading eastwards. We had been contemplating a route of attack on the southern wall of Beinn Dearg as it loomed towards us, and set off towards a line of weakness that nonetheless gave a steep, unremitting ascent. Small, conservative steps to keep my breath was the approach, as flat a footing amidst the heather as possible, hauling myself up with my trekking poles until a clutchful of heather was demanded by the steepest steps. Traversing across the head of chasm in the mountainside we cut up onto the ridge crest, a mini triumph with the toughest graft of the day over. Our reward was a magnificent panorama towards the northern wildernesses of Assynt and Fisherfield.

A thrilling prospect lying ahead of us....! It was far easier than it looked

The most exciting part of the walk was now upon us. Blocking the route to the summit was a rock tower befitting its name of the Castle. It simply didn’t look climbable, but experience has shown that on closer inspection it’s often easier than it looked. Emil had noticed a traverse path on the sunlit south side, but I was determined to give it a go. The obstacle actually broke into three rock steps. The first went easily with a confined slither up a gash in the rocks. The second was also ascended with a chimney scramble. The third rock step appeared the most tricky, with a face of 10-12 feet. Emil was an accomplished rock climber in comparison to myself, so I was happy for him to go first and report there were plenty of good footholds, albeit not so his claim of “very exposed up here!” I followed without any difficulty, refusing point blank – as always – to look down. I was really enjoying myself and lapped up the remaining narrow sections before the final slope to the tiny summit cairn, reached just before 1pm. 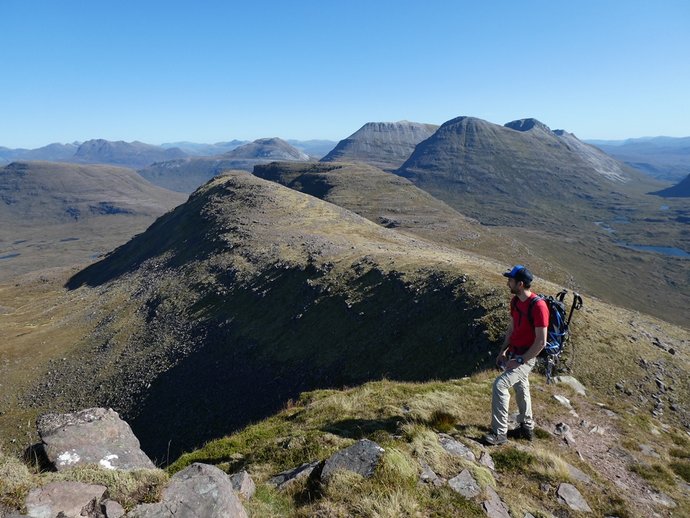 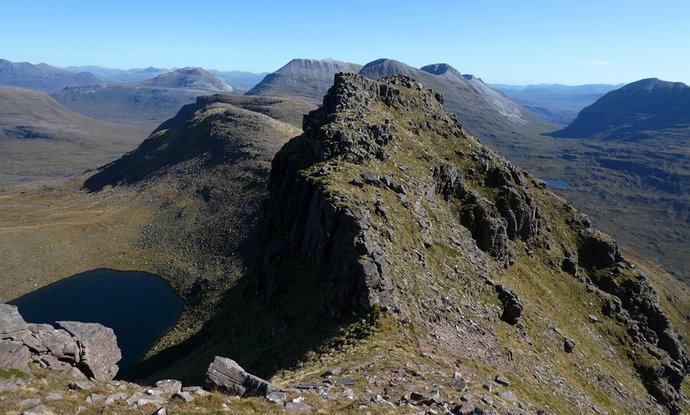 We stopped for a bite to eat and to soak in the amazing views. There was a sharp clarity to the air, with Harris and Lewis standing out on the western horizon clearer than I could ever recall. A white Cal-Mac ferry could be seen in the middle of the Minch. Ben More on Mull was perhaps the most distant sighting, 82 miles to the south. The occasional sound of a stag roaring drifted up from the corrie below, a sure sign of the passing of summer. Continuing to the north-west summit of Beinn Dearg 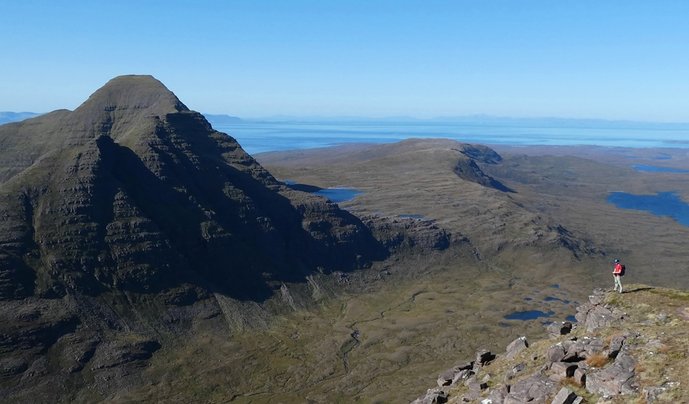 We continued north-westwards along another narrow stretch of crest, following a path towards the terminus of the ridge. We dropped down westwards but lost the main path, picking out the easiest line across steep grass, and sections of loose gravelly track. It was the kind of awkward, momentum-jarring descent where you crave reaching the cushioned green grass in the glen below, and an easier gradient where you can release the hand brake. We crossed over to the footpath that leads back towards the main track to the car park, having given up on any continuation across Beinn Alligin. Emil was beginning to feel some soreness in his knee, explaining he could make it up but wouldn’t make it down! I peeled an orange to pass the mile and a half down to the bridge before temptation lured me into the river for a chilly swim, refreshing - after the initial pain has passed!

We arrived back at the car at 4.40 pm elated at a fantastic day, making the most of remaining daylight for photographs of the vivid autumn colours on the drive back through Torridon. Beinn Dearg remains the only one of the main Torridonian hills that I haven't done, something I really must address!

Great report and photos! We had a similarly good day up there about a month after you. Interesting to see your ascent route - I have always gone up/down about 1km further east, which is still very steep! The shared approach to Beinn Dearg and the Horns of Alligin is possibly my favourite approach to any hill.

jmarkb wrote:Great report and photos! We had a similarly good day up there about a month after you. Interesting to see your ascent route - I have always gone up/down about 1km further east, which is still very steep! The shared approach to Beinn Dearg and the Horns of Alligin is possibly my favourite approach to any hill.

Yeh the map shows the gradient is easier by heading further up the glen before cutting up the hill. Would probably recommend doing that as our route, whilst ok, was a little on the steep side - a few handfuls of turf being grabbed!

I've great memories of this area from an ascent of Beinn Alligin in similar fine conditions. That approach path is indeed a beautiful route. This hill would be a fine excuse for a return

Wonderful place, perfect weather, great scrambling - what more could one ask for???

"Beinn Eighe from the road. Could've stopped 50 times for photographs on the journey" Absolutely - that is one of the most amazing stretches of A road in the country - and not just because it's single track!!