The days before lockdown: Cairn William

The days before lockdown: Cairn William


This is the first of my cluster of reports from early March - the days before the COVID lockdown. We had two weeks of spring hols reserved for hillwalking in winter conditions. Originally, we had plans to maybe travel down south to the Arrochar Alps, where we still have some Munros left to tick off our list, but the plumbing in our house decided, we should stay home! A broken pipe in the bathroom left our house partially flooded, so instead of driving south to climb hills, we had to drive to the local B&Q shop. We spent the next few days fixing the problem. Several meters of pipe had to be replaced, that included making and then covering a big hole in the bathroom wall... Also, the flooding destroyed wooden floor panels in our bedroom, so they needed replacing as well, costing us both extra money and a lot of frustration. Thankfully, the broken pipe only supplied cold water to the shower, so we were still able to use our bath and bathroom sink, otherwise it would have been a total disastahhhhh!
After three days of fighting the pipes and holes in the wall, we decided, we needed to get out of the house, vent out frustrations and get some exercise.Weather was so-so, quite windy and cold, but Kevin found a good Sub'2000er in the east, where we could ramble for a few hours. The coronavirus story was all over the news but nobody was mentioning a lockdown yet, so we thought we were OK to drive east to climb Cairn William.
Our route is an extended version of the official Walkhighlands one, we added Pitfichie Hill - just because we liked it!

All walking was on tracks/paths, some a bit wet but generally good going.

Track_CAIRN WILLIAM 17.5KM.gpx Open full screen  NB: Walkhighlands is not responsible for the accuracy of gpx files in users posts
We started from the Pitfichie Forestry Commission car park - plenty of room for many cars and an info board with different trails to explore the woods. We followed the forest track to Whitehills Stone Circle, which we decided to investigate in detail on the way back. The track then leads due north through pleasant woods... ...with some picturesque views through the gaps in the trees: The area below Cairn William is currently undergoing extensive tree felling (or at least it was before the lockdown), which means more tree stumps but better views fro the path: At the junction by Pitmunie Burn we turned left, climbing about 100m on the track before turning onto an obvious path (it is a mountain bike trail as well, though we only saw one cyclist that day). View south from the path higher up:

This hill on the horizon must be Lord Arthur's Hill which we visited only two weeks earlier:

Panther in her element! I definitely prefer hills, even small ones, to broken pipes and flooded floors!

The first glimpse of Bennachie, which is only 5km to the north of Cairn William's summit (as crow flies):

The summit of "our" Sub in sight. It was blowing a hoolie at the moment

We reached the top to find it deserted. At least nobody gave me me a curious look when I posed with wee Lucy (her 33rd Sub, 45th one for us): The northern pano from the summit, with the tops Bennachie dominating the horizon:

The flat world of Aberdeenshire to the east, with Pitfishie Hill in the foreground:

There was nowhere to hide on the top, so after a short photo session we carried on...

...with the intention to have our traditional break for hot cuppa and cookies as soon as we found a good sheltered spot. The descent from Cairn William on the zig-zagging mountain bike trail took forever, but eventually we spotted a large flat-ish boulder, where w could sit and have our little picnic

Kevin asked, could we add Pitfishie Hill? Why not, I said, there is a good path to the summit, it would be a nice extension to today's walk.
It didn't take us long to ascend the 50 or so metres to the summit of Pitfishie Hill. It turned out to be an excellent viewpoint to Bennachie, even better than Cairn William itself: We had a couple of options to vary the descent: we could return to the col between the two hills or follow another path (also a mountain bike trail) in south-eastern direction through the forest, to join a wider track which would eventually take us back to the Bogmore junction. We opted for the latter, a longer but more interesting route.
A cat in the forest: On the way back, we stopped by the Whitehills Stone Circle. Only two stones are still standing, but the shape is still recognizable. Most likely Neolithic or early Bronze Age. Quoting the CANMORE library: "Of its thirteen stones, only the recumbent, the west flanker and one orthostat are still upright, but the circle is otherwise substantially complete, measuring about 20m in diameter and enclosing a well-defined ring-cairn." 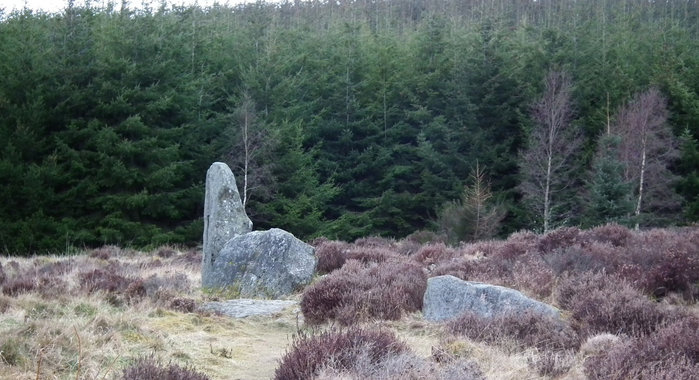 This info board gives more details about the stone circle: An interesting yet relatively easy route, highly recommended for shorter days. Of course, after the lockdown is lifted

We returned home, back to our plumbing and plastering. Thankfully, we managed to fix everything and our house returned to its normal shape, without gypsum dust flying everywhere and countless tools strewn across the floor. On Wednesday, weather improved with sunny spells forecast for the eastern part of Scotland, so we grabbed the opportunity and spent a few hours exploring a certain ridge we had on our "to-do" list since the previous spring. And this lovely ridge will be the subject of my next tale.

Re: The days before lockdown: Cairn William

Nice little report, from back in those almost forgotten days when people use to climb hills! A strange habit!!