A Beauty on Bla Bheinn

Having had one of the most sensational days walking / scrambling up Sgurr nan Eag and Sgurr Dubh Mor on the Friday, the original plan for this particular Saturday was Sgurr Mhic Choinnich.

Friday took more out of us than expected, so mental and physically we were nowhere near fit enough to tackle Sgurr Mhic Choinnich – or fit enough to enjoy it as much as it deserves. Almost embarrassing to admit now but we (mostly me…) were briefly tempted to set off earlier and make the long drive back to Stirling and just enjoy the scenery from the car. “Annoyingly” the weather was genuinely too good, so we needed to make a back-up plan.

Having a skim through the guidebooks the sun quickly warmed up the tent to an uncomfortable heat, or maybe it was the slightly sunburned face beginning to glow away. Either way before long Bla Bheinn seemed like the best option for a quick and (relatively) easy day walk.

Just after 10:30 we arrived at the nearly full car park, which was being renovated, and set off – not a cloud in the sky. 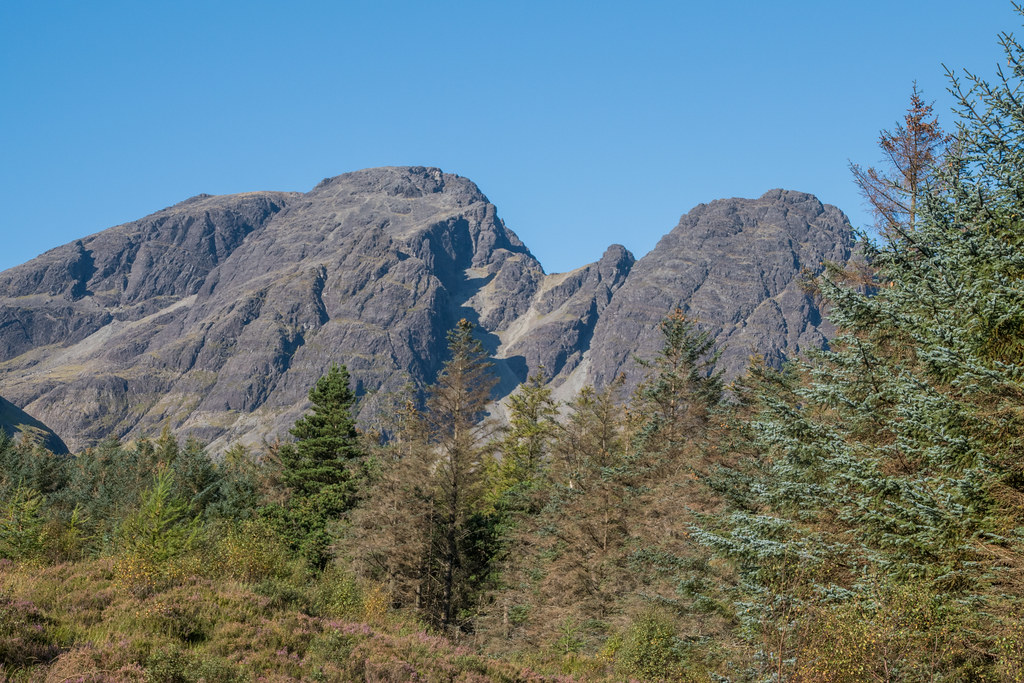 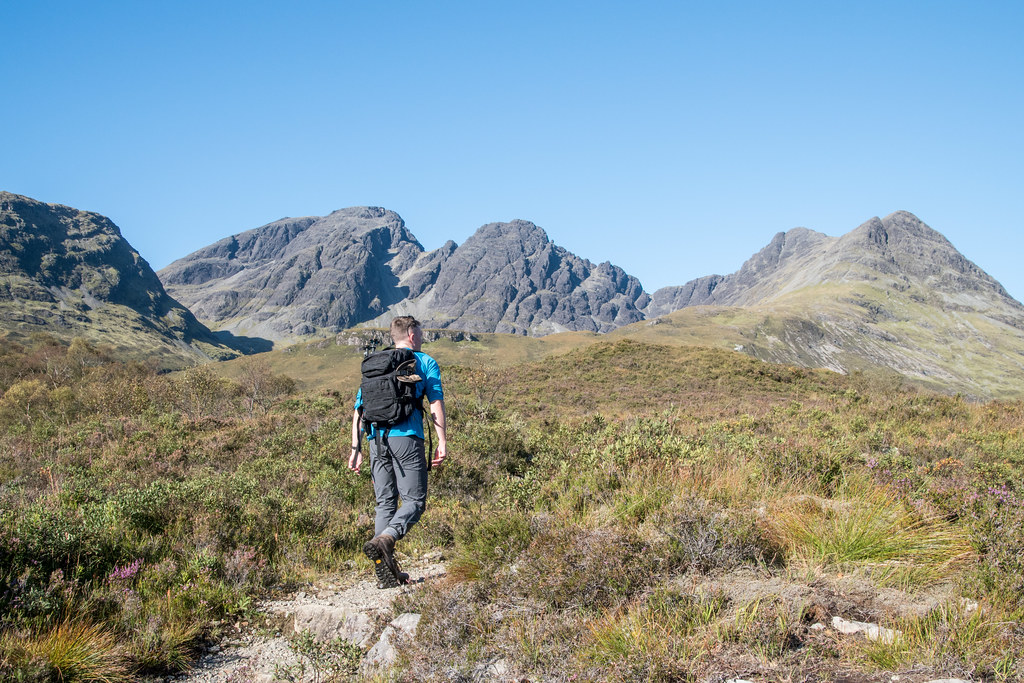 We passed a few couples already heading down who all commented on the views from the summit, how the ascent wasn’t too challenging, and it shouldn’t take us long at all. Not that we were really in too much of a rush but the 5-hour drive waiting at the end was more daunting than any hills today.

Always find it amazing how quickly just being out in the hills in glorious sunshine your near empty energy reserves regenerate, when it should really be doing the opposite.

Originally, I had planned to get a circular route of Bla Bheinn, or something a tad more technical, but time restrictions meant we opted for “just” the normal tourist route – this time anyway. 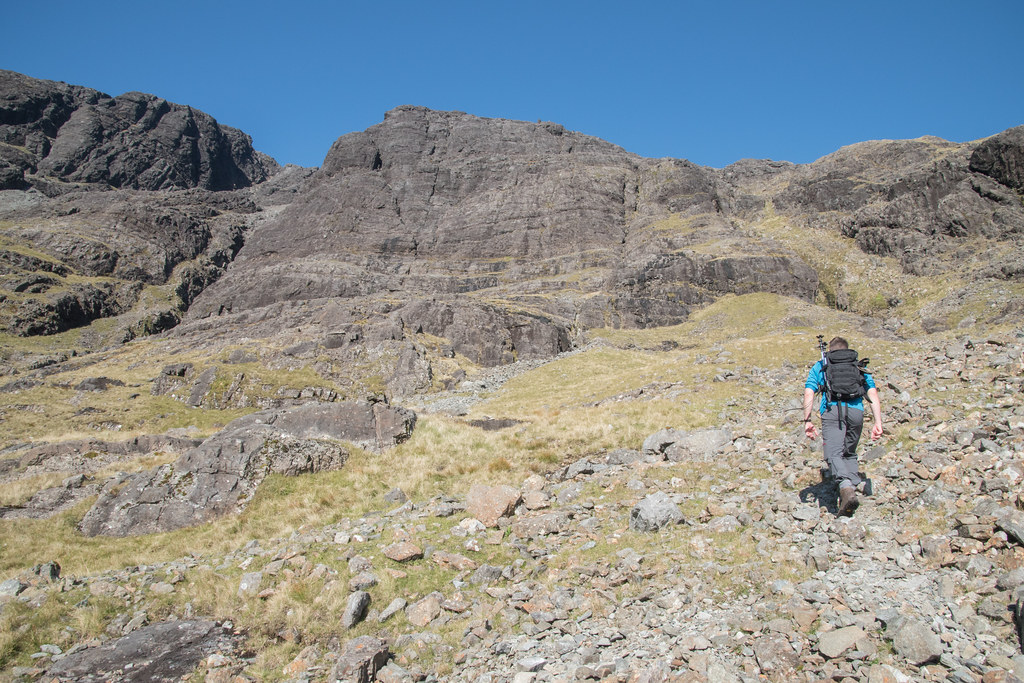 We ended up slightly off the scree path which made going underfoot less scree intensive (obviously), but steeper than needed so after a while we reverted back to the main path.

The going was tough and I was already pouring with sweat, but the views made an excellent excuse to stop and catch my breath probably more than required. 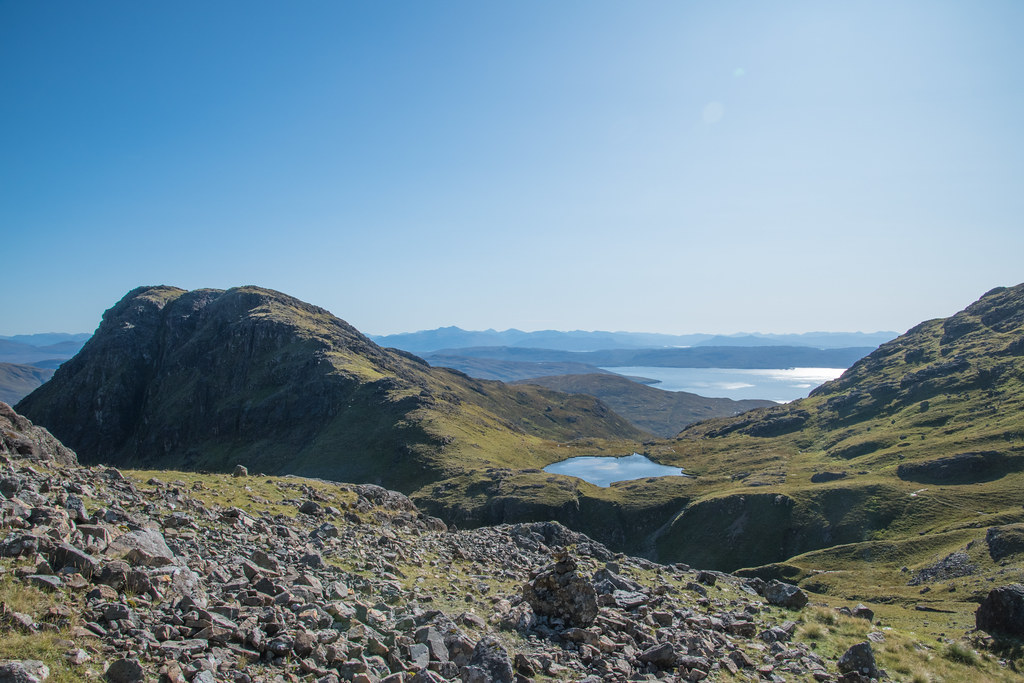 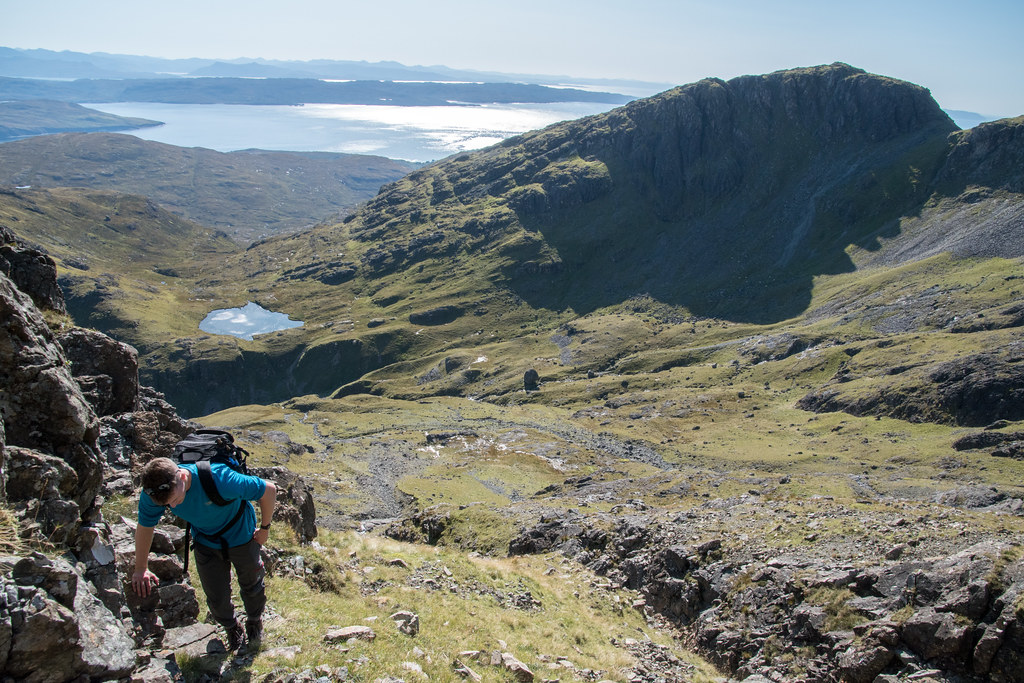 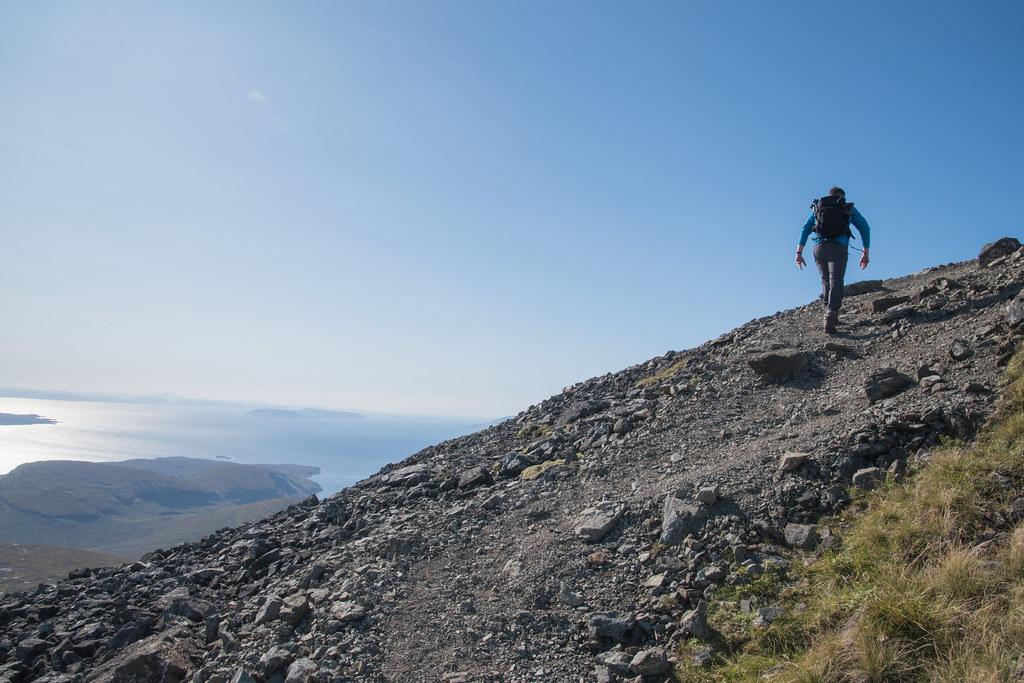 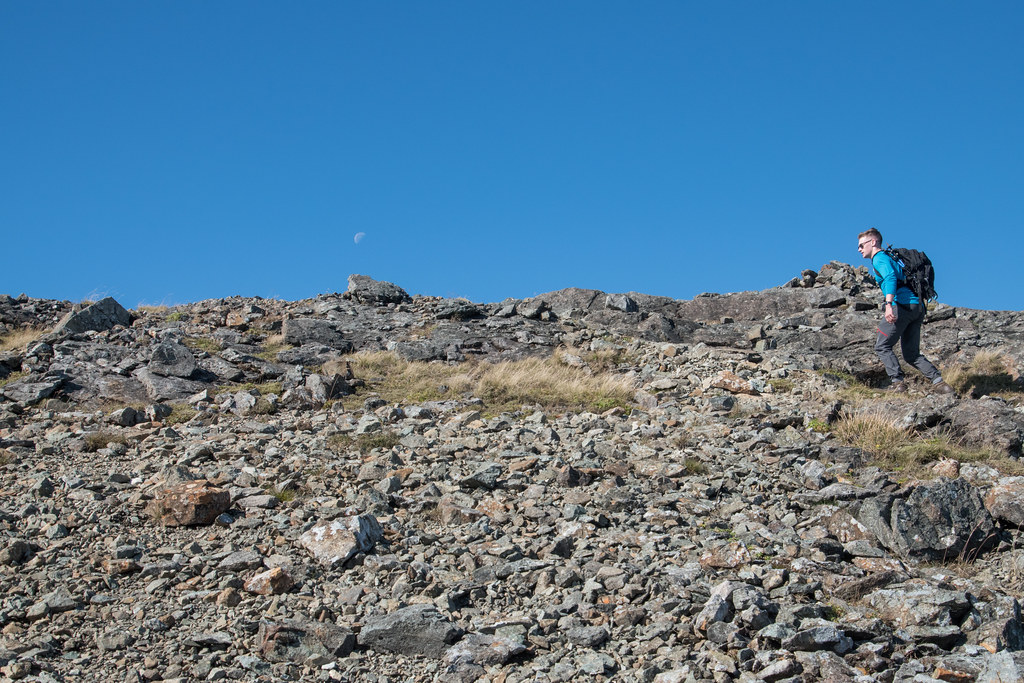 The summit of Bla Bheinn was is rightly regarded as one of the finest viewpoints in the entire country and it most certainly lived up to that expectation! Rather than describe it, I’ll just share the pictures. 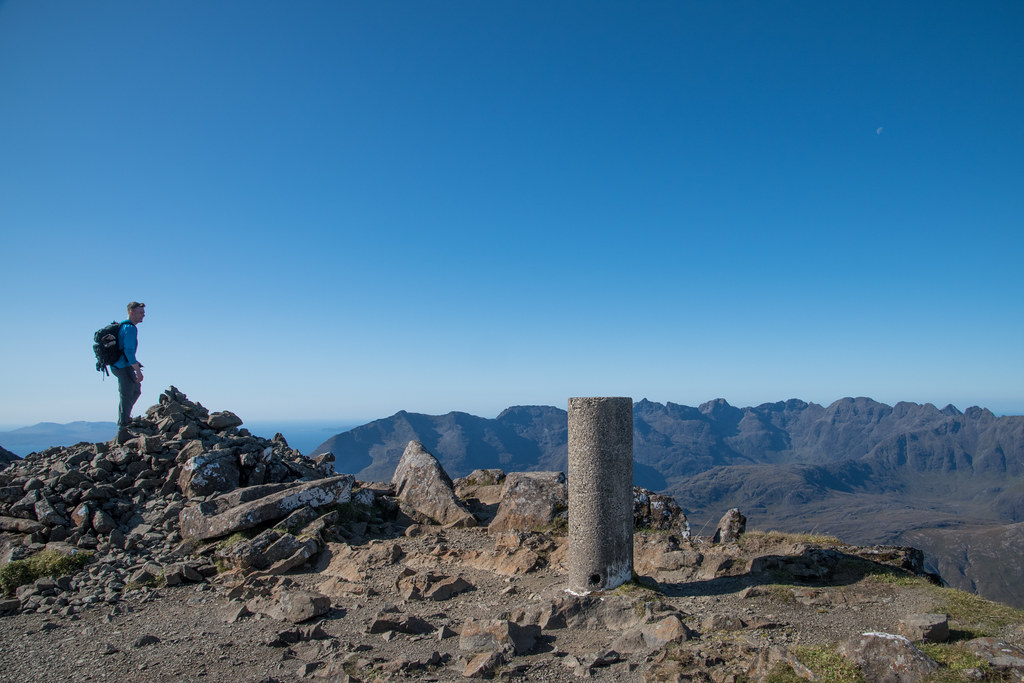 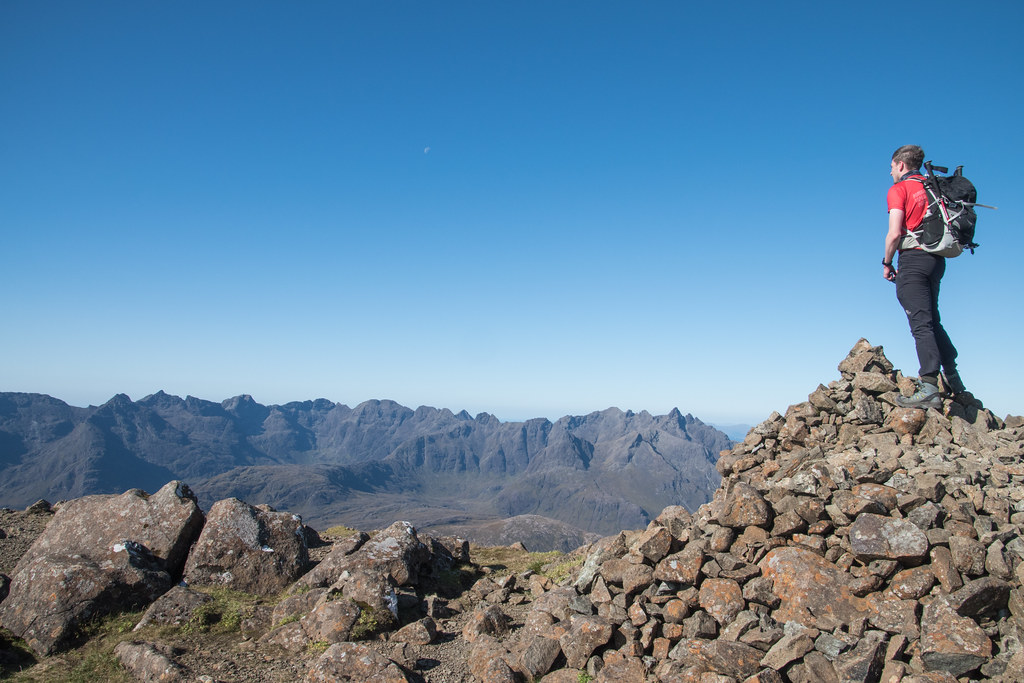 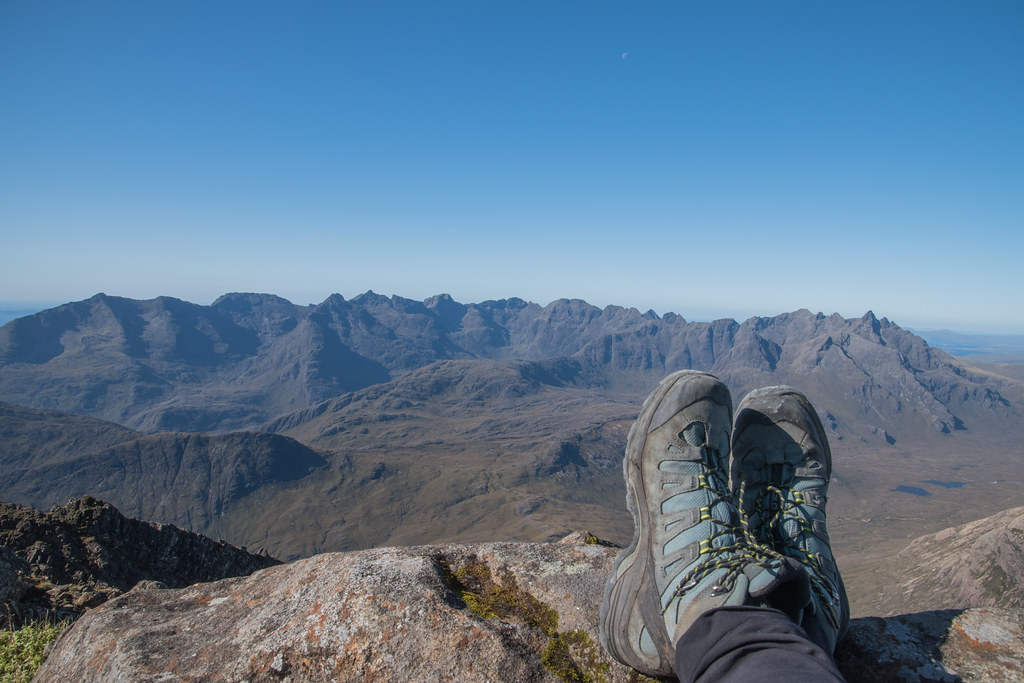 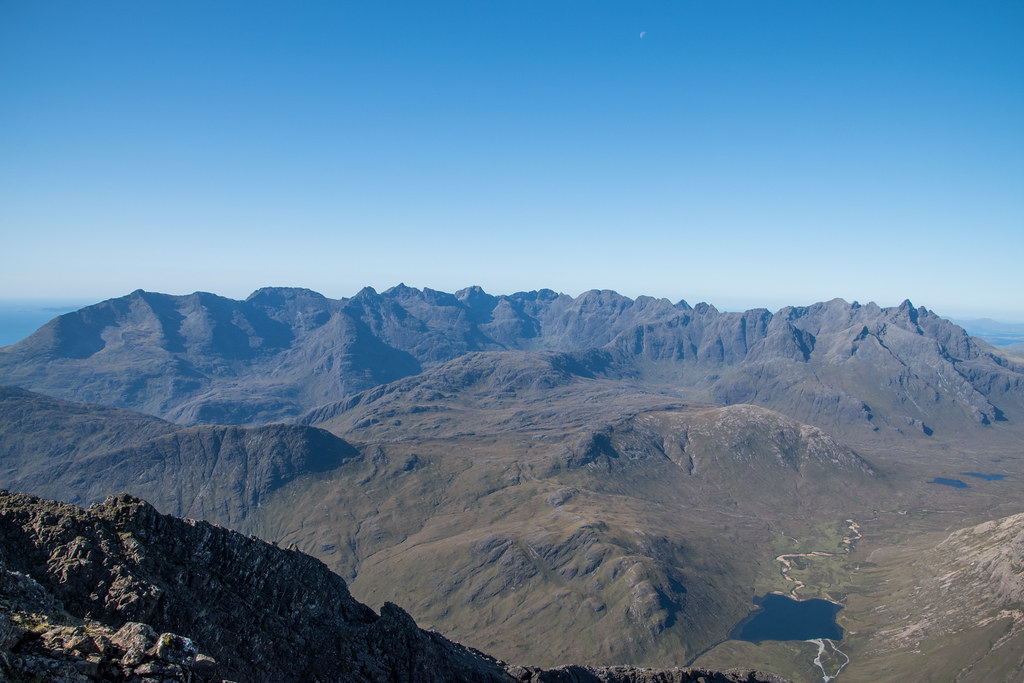 It was very easy, maybe rightly so, to become purely captivated by the Cuillin Ridge. You notice it, everyone is sitting there eating their lunches are facing the main ridge pointing at various parts, sharing stories from previous visits or future ambitions, but the views elsewhere are equally breath-taking on their own merit. 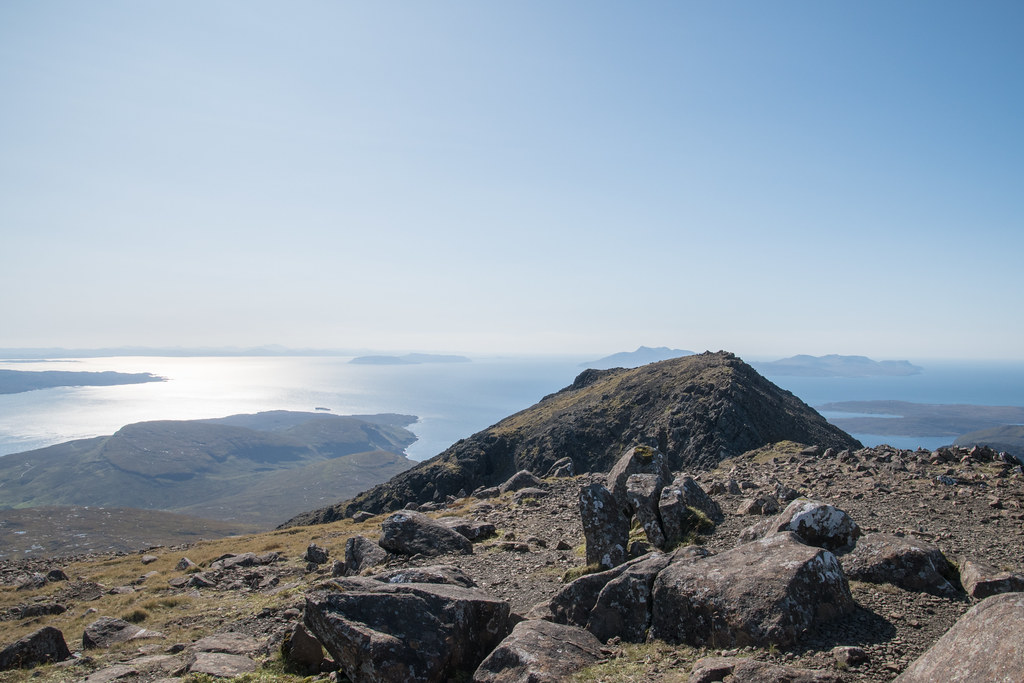 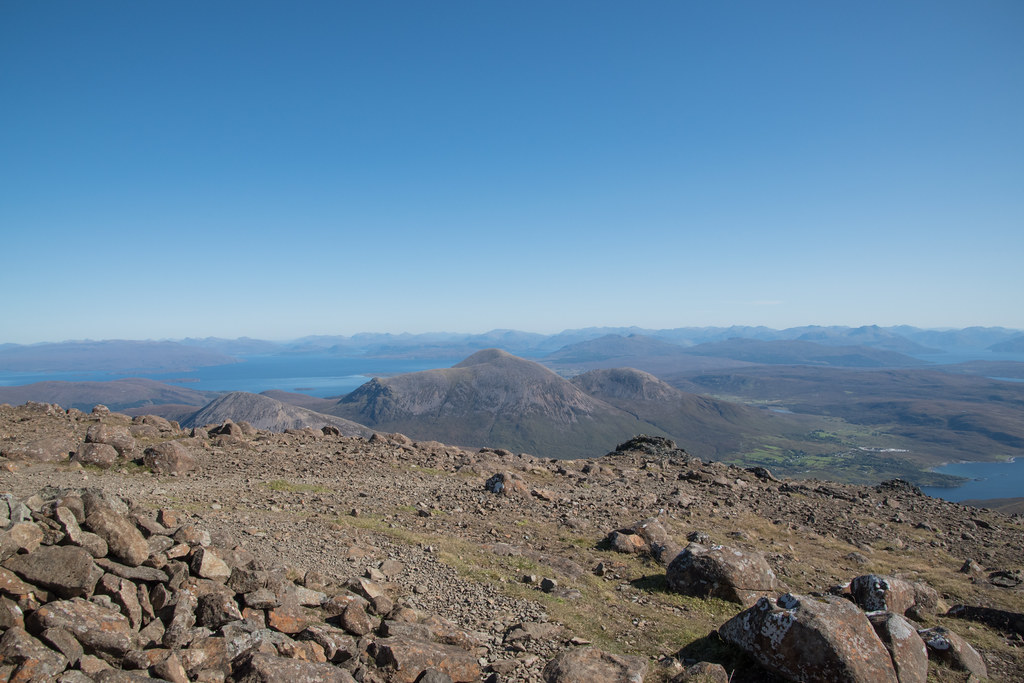 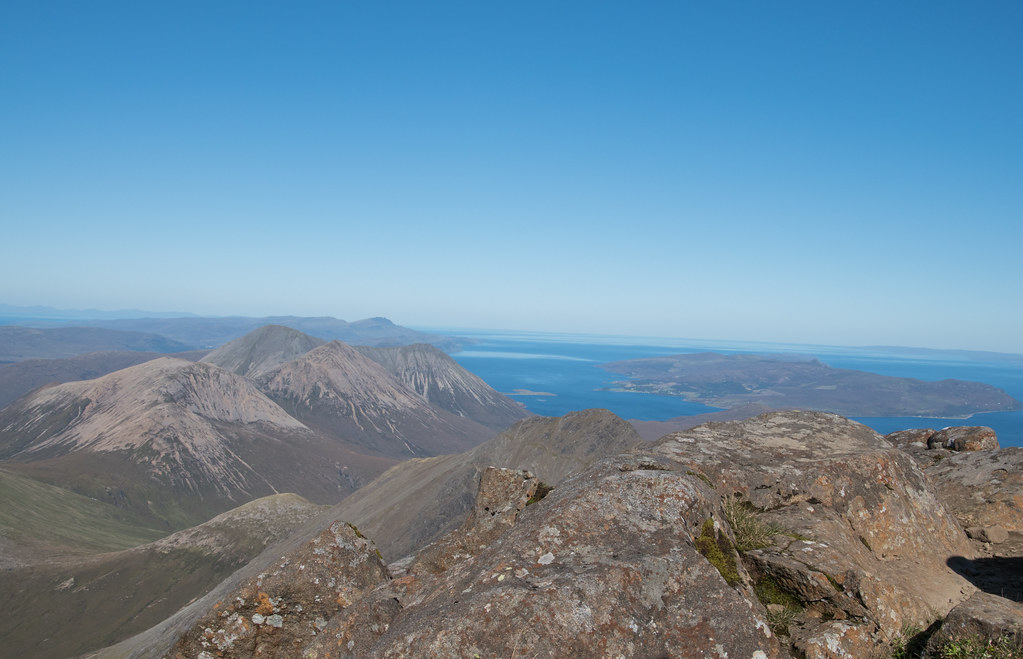 Problem I now have is my list of “I’ll definitely do that hill again” list is growing, in fact there are maybe only a few I wouldn’t fancy doing again. This is easily very high on the “I’ll definitely do that hill again” list. Preferably with a more technical route and the idea of a summit bivvi with some night photography sounds magical. One day! I guess as far as problems go, it’s a good “problem” to have.

Looking back at the photo time stamps it appears we only spent 30 minutes at the summit, although at the time it felt like more, and maybe a more appropriate timeframe – realistically we could have spent all day, but that’s for another outing.

We began the descent and stuck to the main route this time. There were a steady number of people heading up but given the excellent conditions the hill was quiet enough. In other words, it never once felt busy – which was surprising. I guess everyone’s at the Fairy Pools. 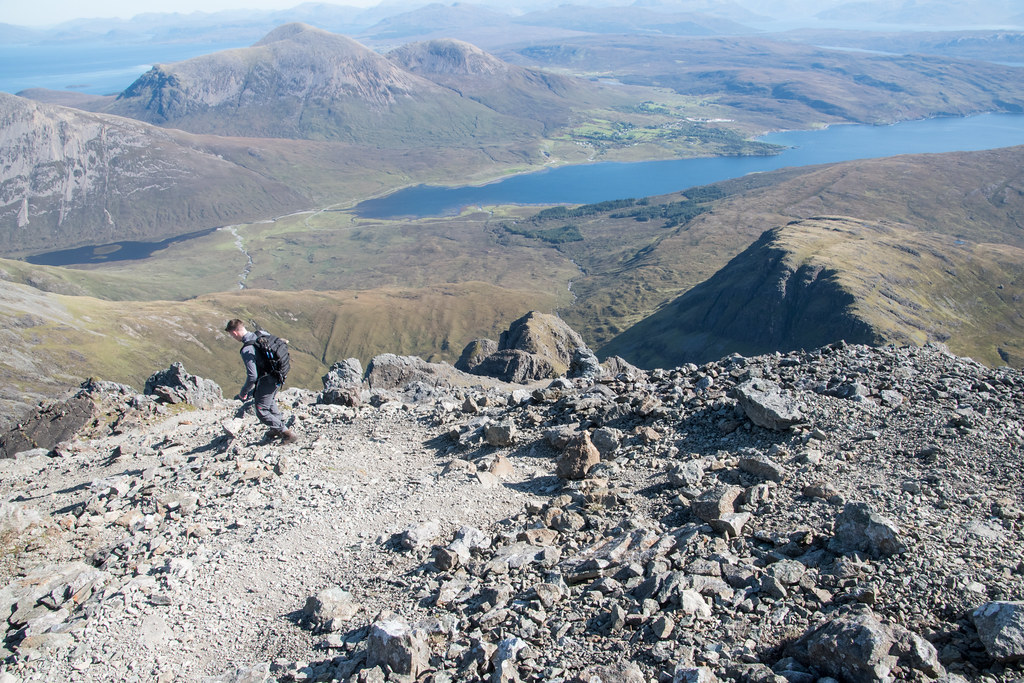 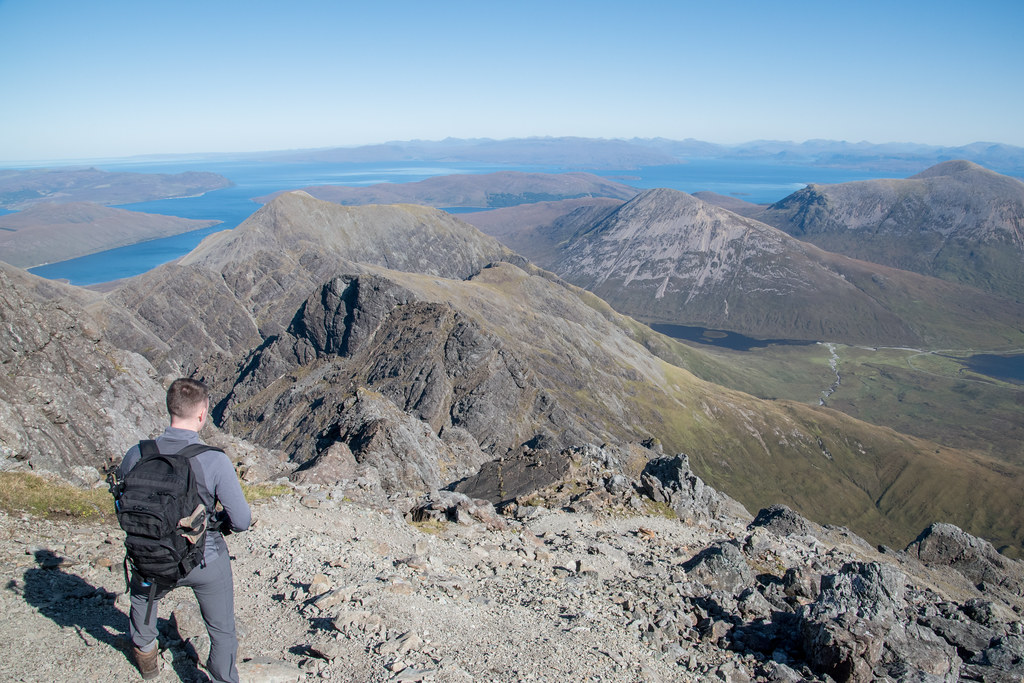 It’s a long way down! 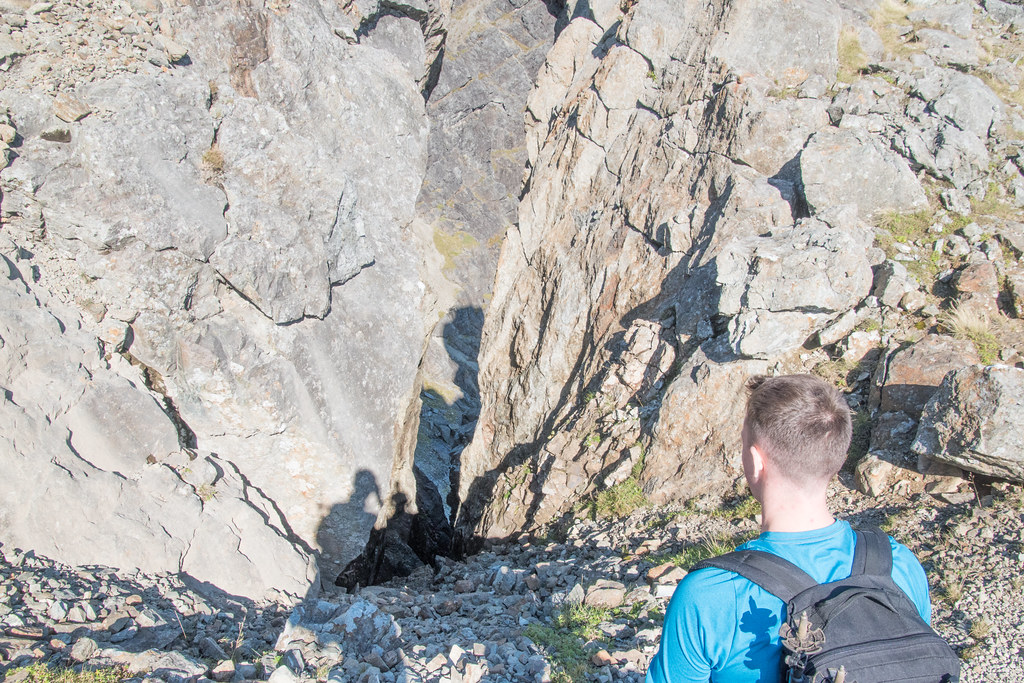 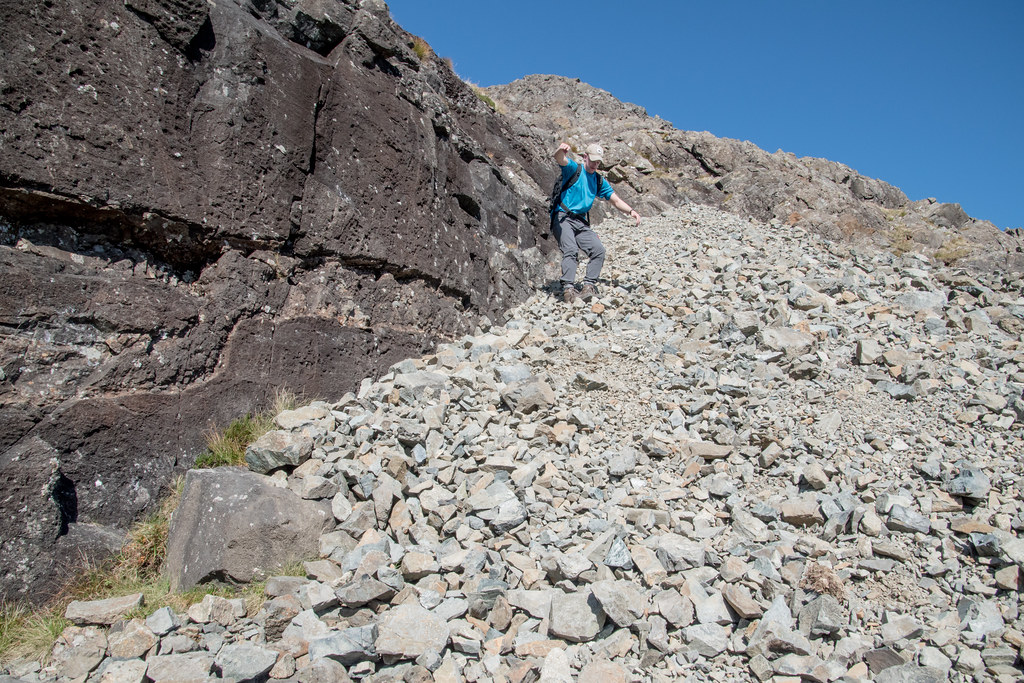 Our pace out was quicker than the previous day. It had now passed 2pm and the heat of the day was making the Allt na Dunaiche look rather inviting. 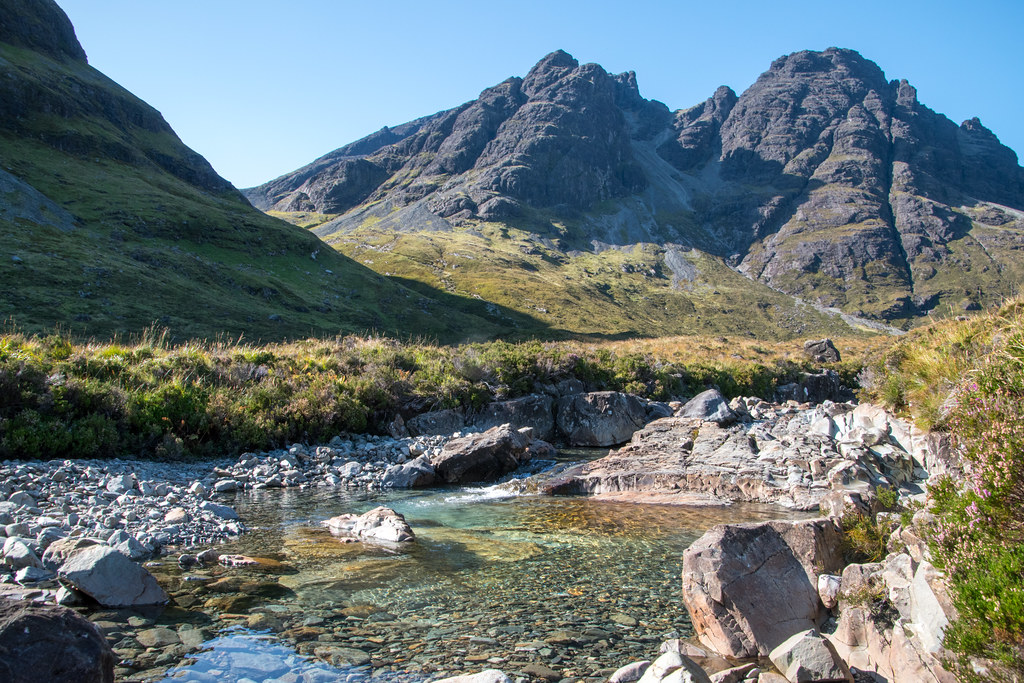 Too inviting. What an excellent way to cool down. 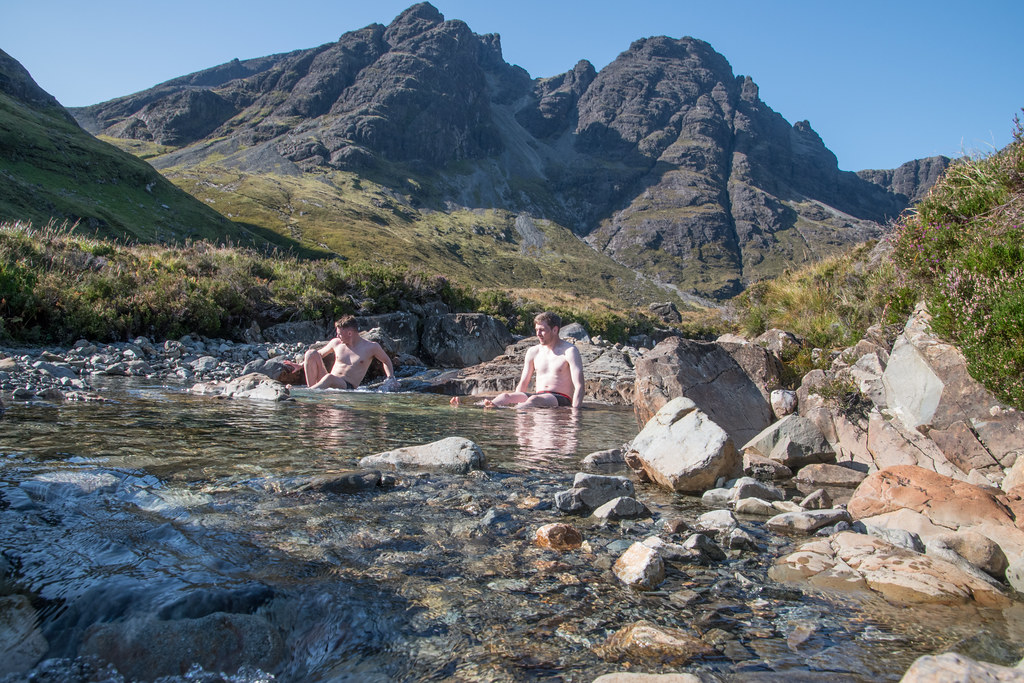 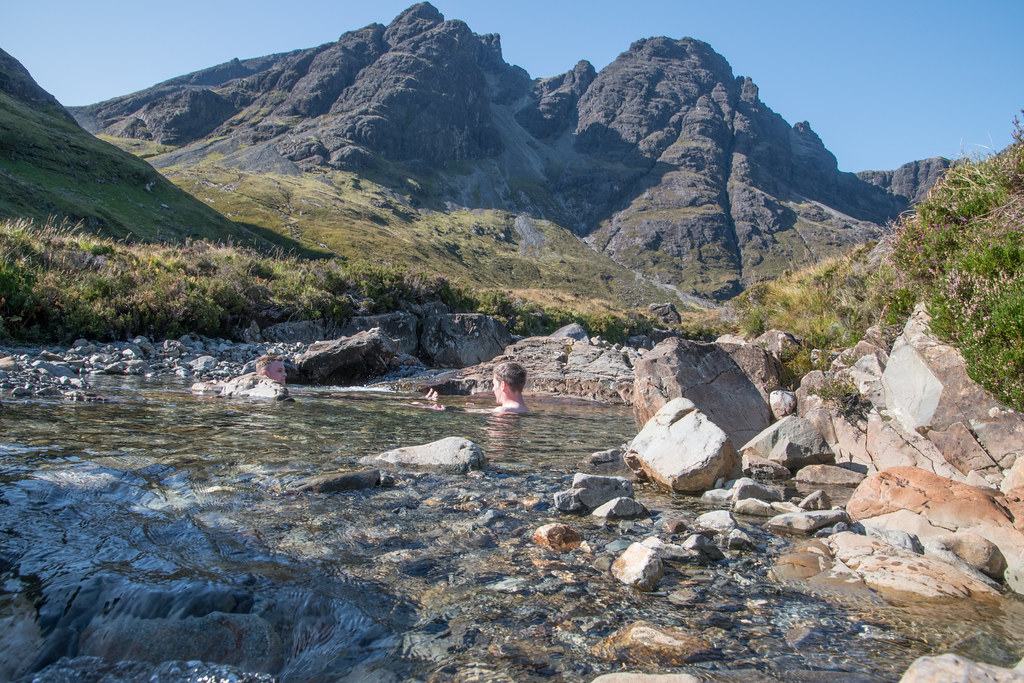 We arrived back at the car slightly later and damper than originally planned but morale was high and ready for the long drive. Frequently return drives all merge into one, but this one was memorable. We cranked up the tunes (old school, Green Day was the first order of the day), windows down, lovely breeze and reasonably fast-moving traffic / clear roads most of the way back. I dropped Connor off at Perth train station and headed down to my folks in Stirling. That final 30 minutes with the average speed cameras was a challenge to stay alert, glad it was only 30 minutes.

Opted to order in the most sensational Dominos (other pizza takeaways are available) and cracked into the can of Boddingtons big Darrel had gifted us on the Friday night – utter perfection!

As far as “back-up plans" go, they don’t get much better.

I took getting out into the hills for granted, this was my thoughts from my 65th outing from the 21st September 2019 and have since only made it up to 69 trips. Now we are all on lockdown as the Coronavirus spreads, I plan on spending some time catching up on the backlog of Walk Reports. Who knows, maybe my 70th Walk Report will be a solo bivvi on the balcony.

What a day to be on Bla Bheinn! Those panoramas of the ridge are just amazing. Lucky lucky you.

(some great scrambling routes up to Bla Bhein summit too

Fab ... walked this hill on a very similar day 15 years ago, your report brought back wonderful memories - thank you

Yeah, she is a beauty isn't she. Excellent clarity on your photos, thanks for posting.