our_route.gpx Open full screen  NB: Walkhighlands is not responsible for the accuracy of gpx files in users posts
Since finishing the Wainwrights off in 2017, I continued to repeat routes that I have done over and over again. Around the middle of 2018 I made a decision to do a second round and so started to concentrate of seeking out the fells that I rarely venture on. The total of a second round hasn't come to much and I don,t know if I will ever finish it. The far western ones are a 3 hour drive for me, which would mean a multi day trip, the problem being, if I get a few days free I would always opt for the journey north over the border.
So to this trip. I was still at this stage still doing the SNT which was due to start on the 4th of April. Fitness was a major concern due to the windy weather over the winter meant that I had done very few trips to aid the fitness. I dislike not being fit for a backpacking trip and prefer to hit the ground running.
With the road bridge still not completed over to Pooley bridge it was the other route from the M6 and then down the eastern side of Ullswater, which was surprisingly flooded in parts before the hill climb at Howtown and then down to park outside Martindale church.
From there its a rising path which crosses the fell at the back of the church. The hillside is crossed with multiple paths and it was only on getting higher could I see a line to the first hill of the day Steel Knotts which I gained by cutting back at a gate and following a rough track straight up 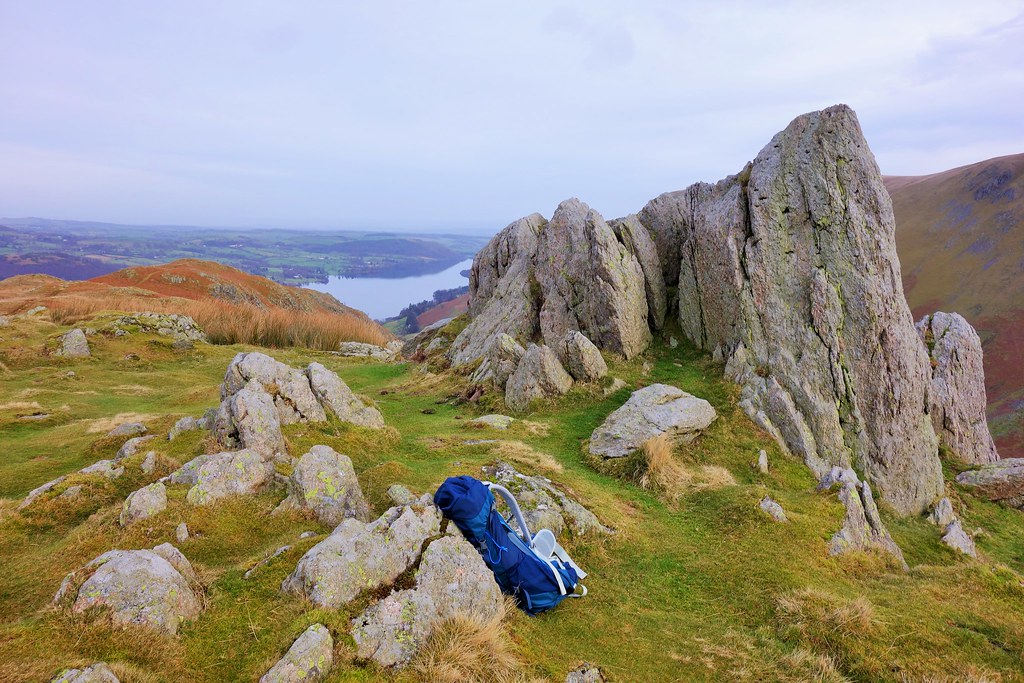 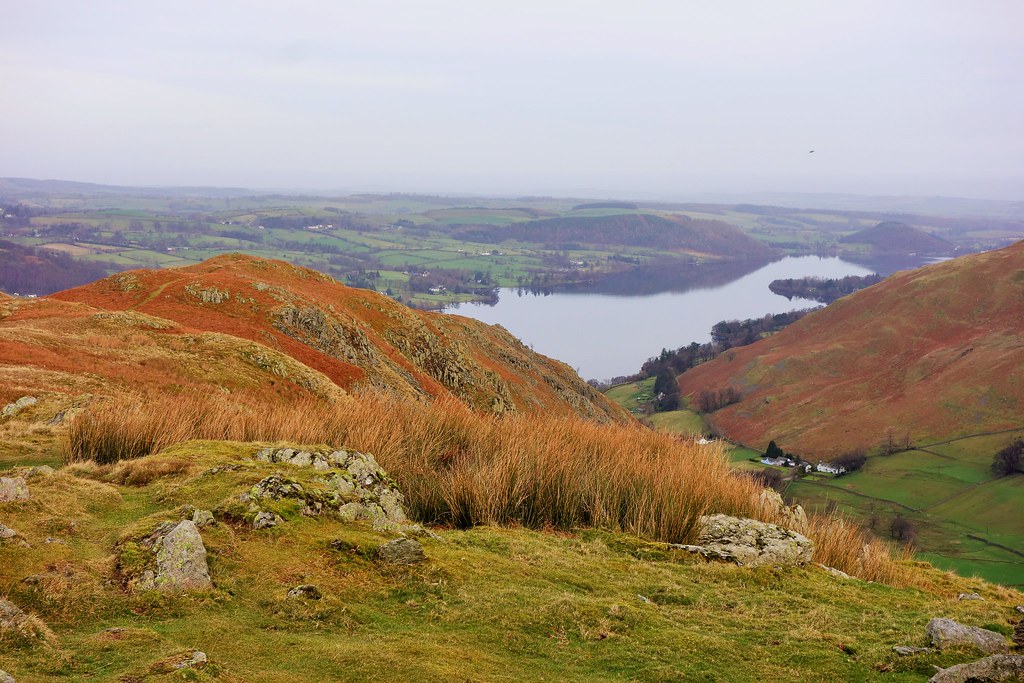 DSC05990
From there it was a simple case of following the path until I dropped down to the spot height of 419m. there are two paths here, I opted for the path that cuts left to a stream and some old stone shelters. From there I made my own route going up the hillside to meet the path coming from Loadpot hill, where I met the only other walker I saw that day. Onto Loadpot hill and then doubled back to follow the track over to Wether Hill and onward. this section, which totals nearly 3 mile to High Raise was very boggy and the track frequently lost due to an estate 4 x 4 prepping the moors. The direction was not in doubt however. Took a break on High Raise and sought shelter in the rocks on the summit as the wind was cold and strong. I could see over to High street and could see the cloud racing over the open ridge to the summit. I then cut over to Kidsty pike and made the decision to give High Street a miss. The route I was doing was 13 miles and it looked very windy on High street so I cut over to Rampsgill Head which gives excellent views down Martindale and then onto the small hillock of the Knott 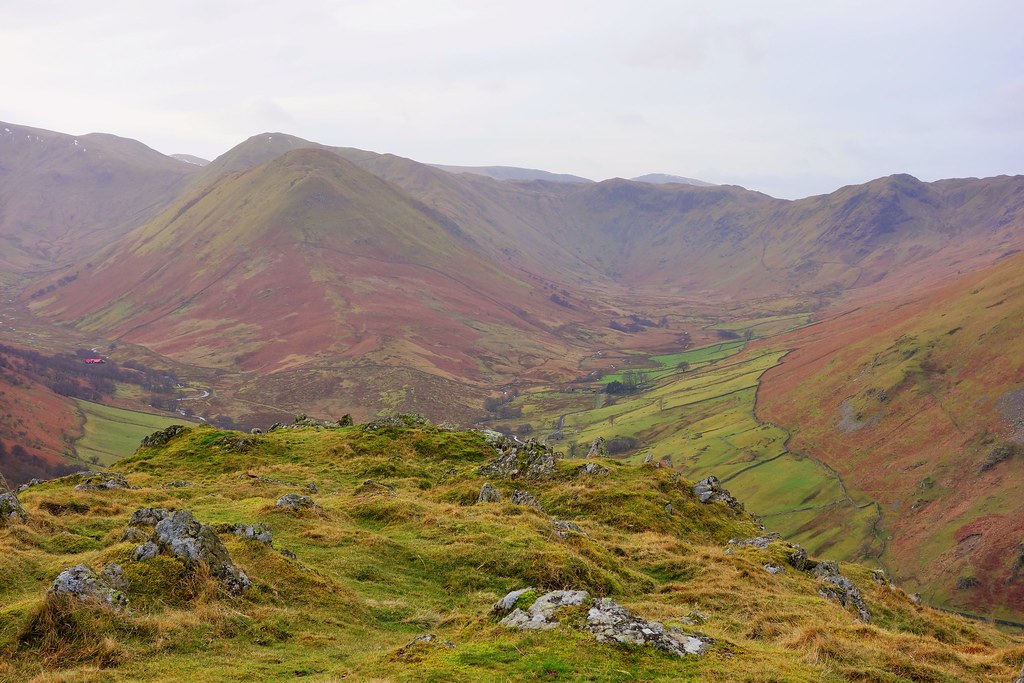 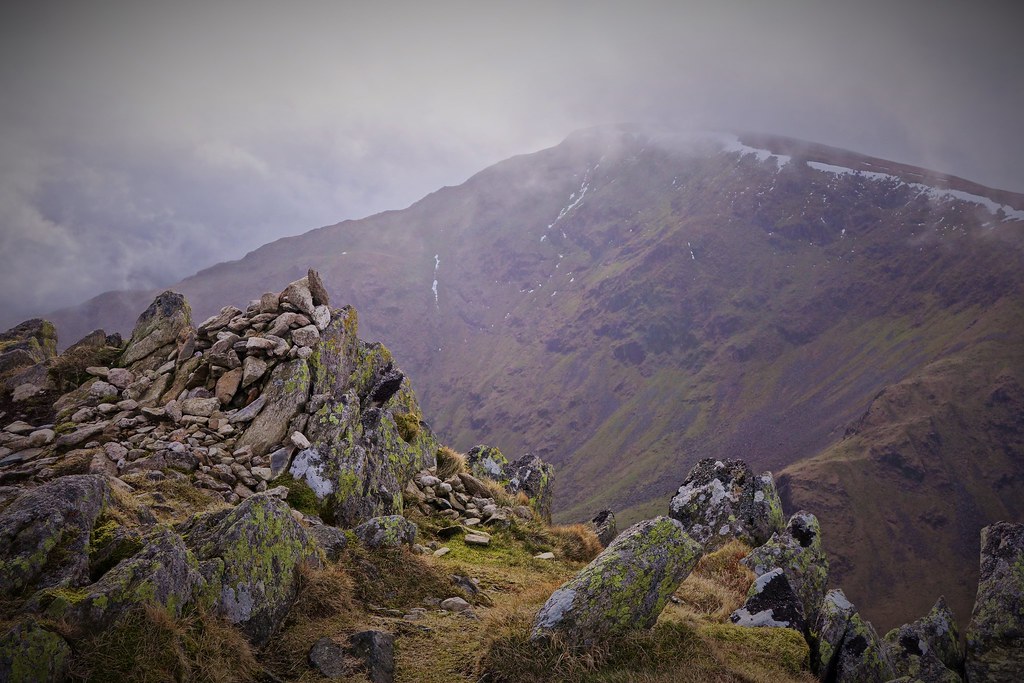 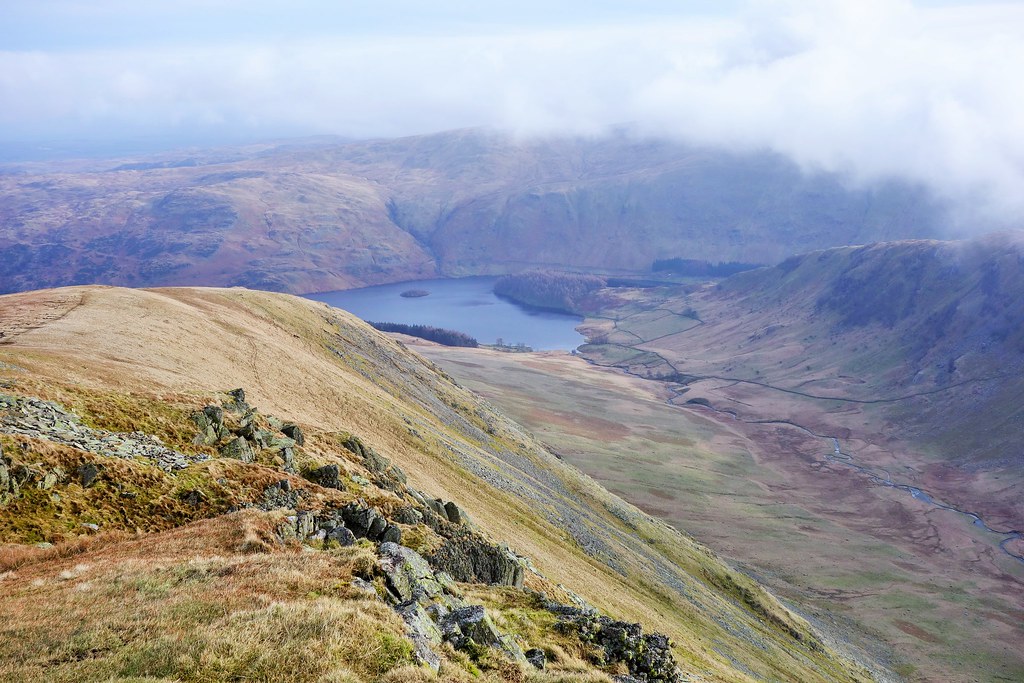 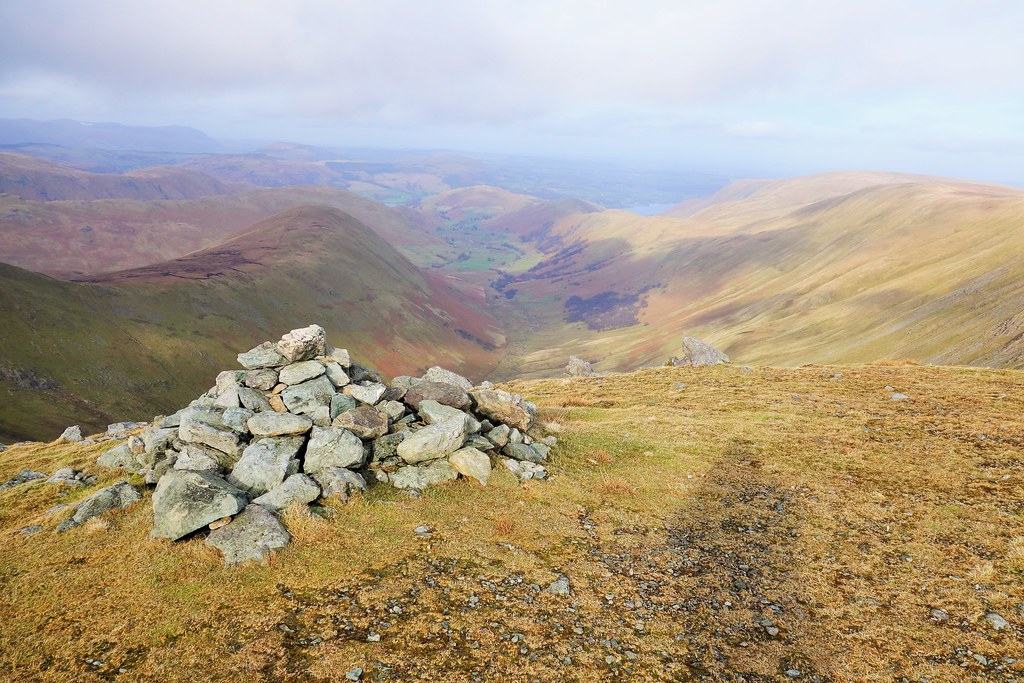 DSC06007
Another decision to be made about Rest Dodd. It looked a long way down and a long way back up on weary legs so I gave that a miss too and kept to the path which cuts over towards Angle Tarn. Before getting to the tarn I cut over to Brock Crags and then followed the ground on the SW side of the tarn to regain the main path and then go onto Angletarn Pikes. From there the route back along the long ridge to Beda Fell and back can be seen and the top is quickly gained before dropping down. I didn't follow the path all the way to the end instead cutting down a steepish fern covered slope which dropped down to the road and back to the car. A 10 wainwright, 20k round with a 1000m of ascent. Not a bad day all round 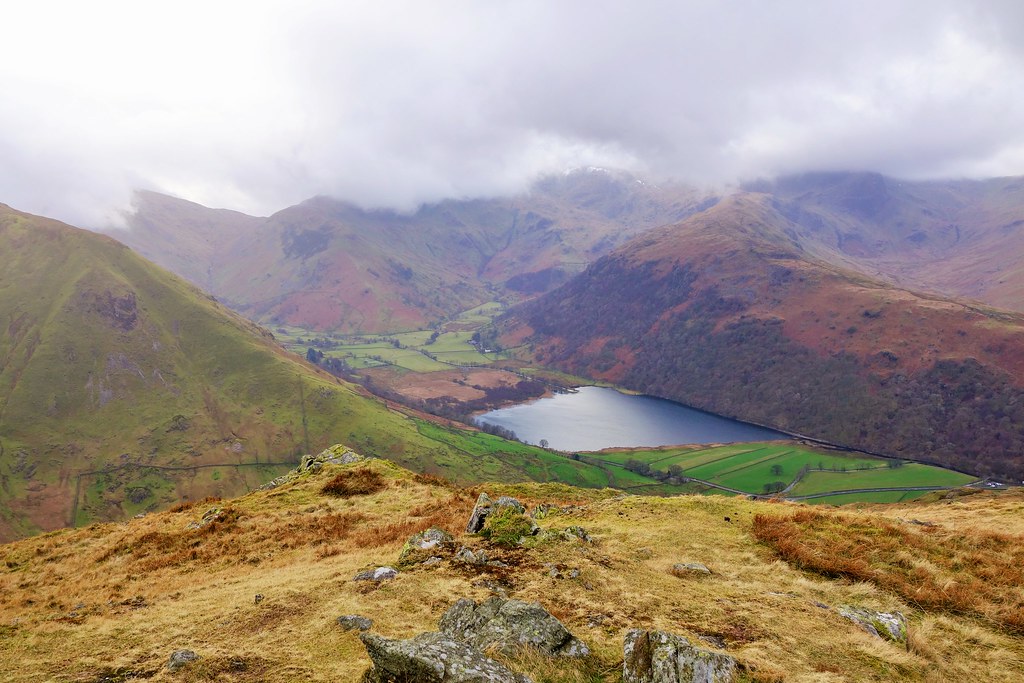 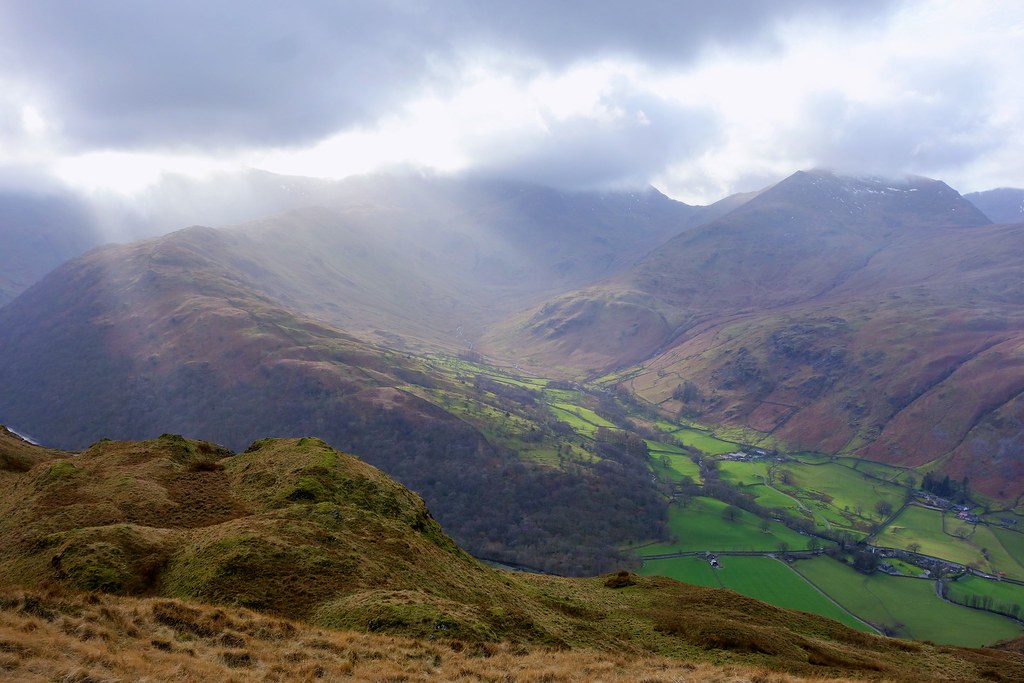