Trying to get to Meikle Ben from Springburn in 1931

Trying to get to Meikle Ben from Springburn in 1931


A friend was not at all interested in her father's old hill walking diaries, but we were fascinated by them and transcribed them. There are more if anyone is interested. Norman was a Rover Scout when he wrote his diaries. 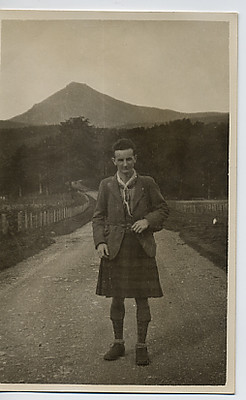 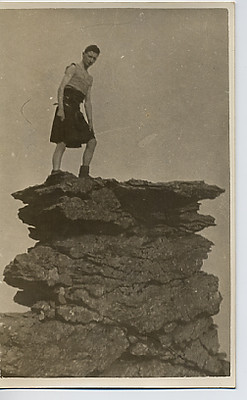 Left Den with Cecil MacHaffie at 11.15 a.m. after attending Rovers' Own. Waited at the Springburn terminus five minutes when an Alexander's bus came along; as Cecil had a season to Falkirk he halved me for my 10 pence ticket return to Kirkintilloch. In twenty minutes we arrived in Kirkintilloch and walked towards Milton of Campsie, along to the left off the main Kirkintilloch road to Kilsyth. As the bus was full, we had difficulty in manipulating our packs and thumbsticks. We also had raincoats over our uniforms.
The ground on either side of the Milton road was flooded and presented a very dreary spectacle, the Kelvin itself very despondent. On coming to the railway bridge over the road, we were astonished to see two small bills stuck on the parapet at a distance impossible to read (except from the railway line, and even then it would be upside down). We found out afterwards that it was an advertisement for an aerial display that had been held in the neighbourhood.
On coming into Milton, we turned to the right and then to the left past a church, after buying chocolate at the shop in the corner. Keeping past the church on the left, we came up a big hill and came to trees, a very secluded spot. We had a short rest and took off our coats. Further up, we came to a gate through which we passed and, following the cart track, saw two houses on our right. We eventually past by the back of the nearer one, crossing a stream by a plank bridge. Continuing straight on, we crossed several fields and came to a gully with a big burn where we made tea (we had a stove).
It was half past one when we started and went up by a hedge and over it, climbing all the time till we were up a good height and, looking back, could see several reservoirs. We were on top of Brown Hill (1299ft). Turning eastwards we descended into a valley and sighted a triangular shaped reservoir and, crossing the stream that fed the 'apex' of it, climbed the precipitous bank and up to a fence, which ran northwards. It now started to get misty, and a south-east wind blowing hard served only to make it worse. We kept on by this fence and reached the summit of Ben Knowe (1509ft), having had an uphill task.
We came in sight of a huge reservoir to the east and, walking through marsh- and peat-land, we soon recognised 'wet feet'. The fence, however, helped us quite a lot. We passed by the shoulder of Cort-na-Law (1742ft) and proceeded 'up' the Bin Burn beside the fence. We soon reached the highest part marked by an old fence support stuck on the top of another one. We now descended, as it was a fool's job to attempt 'doing' the Bin in such weather. We got occasional glimpses of it through the mist, and after a dull journey came to the farm of Waterhead, which, although not much of a farm, was the first sign of civilization we saw.
Darkness was now falling and, passing the farm with its smoking chimney (the only sign of habitation), we made for the road. Pausing, however, at the sight of three objects lying on the ground, we investigated them, as we were puzzled by them. They were three bell tents, which had been destroyed by the weather. Plates, forks, spoons and all sorts of foodstuffs were scattered about, the tent poles broken and canvas torn. Re-crossing that stream (River Carron), we reached the road and, turning southwards, trudged along and stopping under a bridge to put on our coats and gloves, for it was bitterly cold.
There was not much traffic on the road and, passing the Old Toll House, we came to Jamie Wright's Well, where we had a great view of the lights of Lennox Castle and its avenue, Lennoxtown, Milton and Campsie Glen, tracing the road from the motors' lights. We came through Lennoxtown and were approaching Milton when we decided to make tea by the roadside, getting water from a house and sitting among the broken stones at a 'cut-in'. We took the bus from here to Kirkintilloch as it was 5.50 p.m. and C. had to be back home for seven. We found a torch invaluable while lighting the stove, as it was a miserable night with a cold and penetrating wind. Reaching Kirkintilloch, we had no little difficulty getting on a bus, as they were all full up, but eventually did so. The total distance walked seems to be about twenty miles, which was not too bad on account of the wildness of the wind. N. M.

(Editor:There was a map here, which I can no longer reproduce since I gave the diaries bak to NM's daughter. Hand-drawn and to very good scale.

This is the only photo of C. MacH. that I can find, since NM died some years back, but it seems a pity not to share his walking diaries (1931-33), which cover various weekends,and holidays when he camped and used the then new Youth Hostels.The uniforms he mentions are scouts uniforms.