First Munro in a Long Time - Make It Two!

First Munro in a Long Time - Make It Two!


It was the day after the first really hot sunny day of the year and I was feeling pretty hungover from spending the day before with cans in the sunshine! Myself and my friend Jennifer were keen to get out and bag a Munro after realising our shared love of getting out in nature the weekend before on the Corbett Ben Venue. It was Jennifer’s first Munro and my third, having not done one since Ben Chabair two years previously. We were new to the idea of Munro bagging, and so did not plan to bag two in one day at all.

It was overcast as we arrived in Arrochar around 10am, however it was soon to turn to another day of glorious sunshine. On my previous three Munros, I was led by who I was with, with no concern for what was the right way. Neither of us had planned the route this time either, so luckily we were headed to this well trodden location. We also didn’t really plan for what mountain we wanted to do, however I knew I wanted to do The Corbett/Ben Arthur another time. Without realising at the time that this is not good for mountain climbing, we took a look at Google Maps and decided to go for Narnainn. So this meant turning right instead of left after the winding zig zag path, the left leading the way to Narnainn’s neighbours Ben Arthur and Ben Ime. This led us along a forestry road and then on the left there seemed to be a path that would take us up. We were a bit unsure as at some point it looked like a path, at others it simply looked like dig outs of the ground where water was falling. However we kept at it and soon a father and son came up behind us and we all hoped we were headed in the right direction for Narnainn. Not all of us can be wrong, right?

It was a steady climb up through some trees and then up to a much clearer path, and it wasn’t long until we had a great view back over Arrochar. 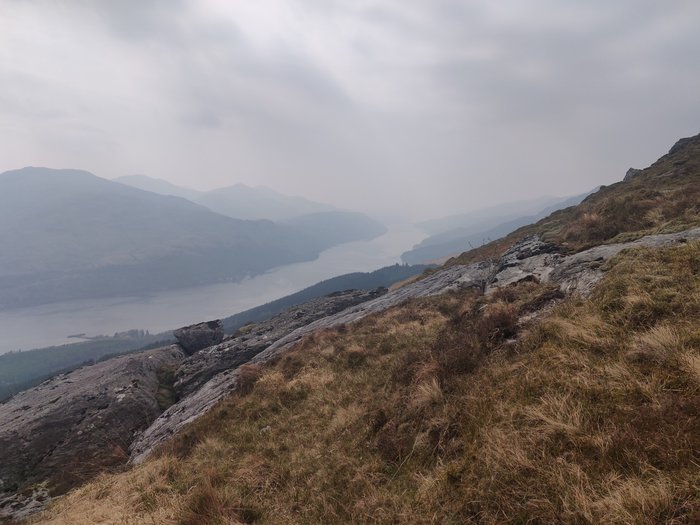 It was a bit clearer than it had been that morning (soon to get much clearer!), and it was a great reminder of why we were there. On we went, and it wasn’t long until we reached one of a couple of Narnainn’s ‘false peaks’. We wondered how long it was to go, having really no idea as it had been so long since I had done a Munro. At times I was struggling, and after thinking the Corbett the week before was no problem, I thought this is what the bigger ones are like! This wasn’t helped by my hangover, however I felt that very quickly ebbing away as I climbed and appreciated my surroundings – a great cure

Eventually we reached a plateau and a cairn that signified the top. The plateau was huge and made ‘the top’ of the mountain a bit indistinguishable. The sun really was out now and we could see all around – and we couldn’t help but wonder what the significant, bigger peak to the north was. Was that the actual peak and this was yet another false summit? We consulted Google Maps (again, forgive me) and there was nothing to signify what we were on, however it had Beinn Ime marked out. What had we just done? Where was Ben Narnainn? We agreed that there was nothing more to it than to go for Beinn Ime. It didn’t take much to get to the bottom. The path leading away from Ben Arthur and towards Ben Ime was very busy – we had seen next to no one on Ben Narnain. It was a fairly steep slog up to the top of Ime, the highest of the three peaks, however we were motivated by a ‘we passed you but you won’t pass us’ with a group of guys. When we got to the top we now had a good bit of signal to check what we’d just done, praying that the first peak hadn’t just been ‘a big hill’. But all good, we confirmed the first peak was Narnainn and this was Ime. Two Munros!! In one day? The idea at the time was amazing to us. 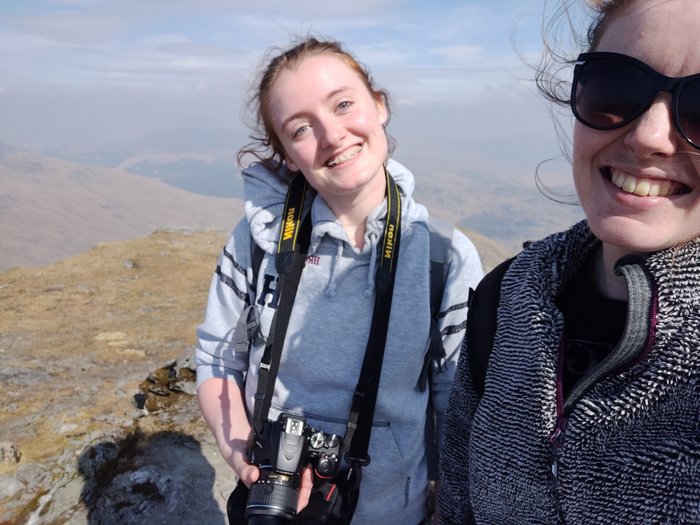 From the top of Ime, with our concurred Narnainn behind me and Arthur to the right. What a day!

“You’ve done it girls” said one of the guys. “You haven’t done two!” we laughed to ourselves.

Down we went, and it was lovely passing through between Narnainn and Arthur in the sunshine. Narnainn was towering to the left, definitely not just a big hill! Jennifer was keen to do Ben Arthur as well. I was not. We passed by the father and son again when going back through the zig zag path through the forest, after seeing them on Beinn Ime as well. “Great day for it. We’ve done Ben Arthur as well.” Have ye aye?

My feet were very sore when we got to the bottom and had to walk to the further away car park however we were feeling very proud of ourselves, and I was glad it was a Bank Holiday Monday the next day The view from this bridge – the positive of only getting a space in the further away car park!