My first solo Munro with a beautiful journey there

My first solo Munro with a beautiful journey there


I had been speaking to a lady in work about Munros, and she was saying how she loves to go by herself and appreciate the total isolation. I was unsure on the idea, but she strongly encouraged it, so when it came to a sunny Saturday a few days later and my usual walking buddy was working, I decided to give it a go. I picked out Ben Vane.

I don’t drive so it was all aboard the West Highland line which I had been on to Ardlui once before and loved it. The start of Ben Vane isn’t walking distance from a train station however I thought it would be nice to cycle there. Ardlui train station would really mean going further north than the start to then cycle back, however it was a shorter cycle than it would have been from Arrochar & Tarbet.

It was a lovely sunny day so there were great views from the 8:20am train. The three mile cycle was then wonderful – I was so used to cycling on the streets of Glasgow it was amazing to have Loch Lomond next to me. I have been on this road a number of times however it made such a difference being on a bike, and I could stop and take pictures like I wouldn’t be able to do in a car. View across Loch Lomond from the side of the road

As I was heading south, most of the cars on the road seemed to be heading north, away from me so it wasn’t too busy either. I got to Inveruglas visitor centre and parked my bike there. I then headed further along the main road by foot to get to the beginning of the trail to Ben Vane. There was a tarmac track to begin with, and I began to think I would have got along quicker if I still had my bike, however I may have struggled with somewhere to tie it to when I had to ditch it eventually. I was enjoying the difference of being able to listen to music as I walked and it was good motivation. I hadn’t quite got a grasp of getting offline maps on my phone, and had been using the directions set out on the Walk Highlands webpage. In true ‘me’ fashion I managed to spectacularly miss the path turning to the right which would lead me the ‘correct’ way up the mountain, and this made a big impact on my later journey. Unknown to me at this at the time, I kept going up the main road, wondering where I was supposed to turn right, until I came to a tiny little cairn and what may resemble a path. With no other options I went for it. After a while, there was no path at all, and I was soon following footprints that could have only been made by sheep. By this point, I was too high to really turn back so I kept at it.

It was exhausting. Without a path, it was a really steep struggle up the left side of the mountain, and I was going against all mountain rules of sticking to the path to avoid eroding the natural environment. However, I had come this far and it would have been dangerous to go back down this steep way, and I still would have no idea what the ‘right’ way was. Difficult as it was, I was helped along by the views that were opening up over Loch Lomond. I then was elated to reach the top, and as I sat with something to eat admiring the views (and happy to finally see other humans who had come the right way again), what I had just endured was quickly forgotten. Being myself, I was glad to take it in and then start moving again at my own pace. The route for Ben Vane is an up one way and back that way as opposed to a loop, so it was time to discover the correct path on the way back down! It was a very clear stony path, nothing like the mossy grassy way I had come. There are a few false peaks on Ben Vane which were now becoming clear as I headed down – I had completely avoided them on my way up! As I reached the bottom I spotted these clearly marking the way in: 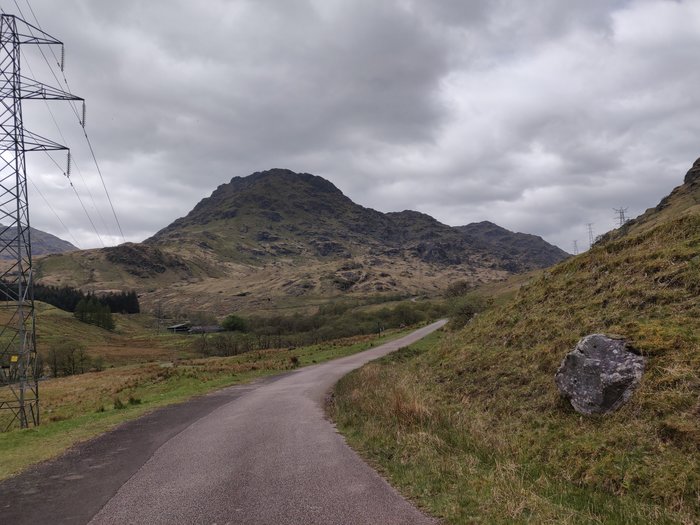 It was then back down the main road to reach the bottom, and I stopped at the café at Inveruglas for a cup of tea. The problem with taking the train to mountains – you’re either running for a train or far too early for the next! However it wasn’t the worst place to wait. It was then back on the bike to Ardlui station – and by this point the traffic was heading south so it was quiet on my side of the road once again!

Apart from my awful diversion it was a great experience climbing myself. I would say company is nicer, but doing it alone is better than not doing it at all.

Re: My first solo Munro with a beautiful journey there

Had the same experience first time I did Vane. Missed the path and basically spent the day scrambling up wet grass. Was literally on my hands and knees just before the summit, where I crawled onto the actual path right in front of a group of bemused walkers.

A bike would be amazing for the downhill back to inveruglas. Not sure I would fancy the uphills on the way there though

Re: My first solo Munro with a beautiful journey there

Raynor wrote:Had the same experience first time I did Vane. Missed the path and basically spent the day scrambling up wet grass. Was literally on my hands and knees just before the summit, where I crawled onto the actual path right in front of a group of bemused walkers.

A bike would be amazing for the downhill back to inveruglas. Not sure I would fancy the uphills on the way there though

Glad it's not just me! I was afraid of stumbling upon some walkers too!
They didn't feel too bad - maybe it was too pretty for me to notice

but the downhill on the way back was indeed very good