Munro in the dark?! Torchlight Challenge with National Trust

Munro in the dark?! Torchlight Challenge with National Trust


I was at birthday tea with friends and my friend Jennifer asked if anyone wanted to do the Torchlight Challenge with her. The idea is that you climb a mountain with the National Trust – either Goatfell, Ben Lomond or Ben Lawers – at dusk, and reach the summit when it’s dark. Torch lights are lit and the idea is that you will be able to see the other torchlights from the groups on the other mountains. To take part all you have to do it raise £50 for the National Trust. Yes, I’m in!

I have climbed Goatfell many times as a child and I have done Ben Lomond before, so I opted for Ben Lawers. I made a collection for the fundraising at a birthday party I was hosting, and posted about it on social media, and it wasn’t long until we were good to go. In the days leading up I was constantly checking the weather hoping for a glorious sunset but it wasn’t looking good – oh well it’ll still be fun.

We had been out twice before together, naturally leaving in the morning so it was the strangest feeling getting up slowly after the night before and not leaving Glasgow until 3pm. As expected, it was overcast and raining. We didn’t have much hope for it clearing up but were still glad to be there. We got to the meeting point in Ben Lawers car park and felt a bit odd gathering with a group of strangers and not just setting off. We had introductions and explanations of the plan, and off we went. I’ll admit walking in a group wasn’t my favourite – the going was a bit slow and instead of seeing lovely views ahead, I saw more of the backs of people’s heads. Safety in numbers though – no chance would we be doing it in the dark ourselves!

The group stopped for a lot of breaks, and myself and Jennifer began to think the fast group would have been better suited for us – shouldn’t think less of ourselves again Clear then but not for long! Up into the clouds

Eventually we reached the first summit of Beinn Ghlas, a Munro that isn’t really done by itself and is more of a stepping stone on to Lawers. We stopped here for something to eat and were happy it was one down one to go.

On we went to do Lawers. I found the going here a bit steeper and tougher, and it was confusing not knowing how far it was to go due to being encased in cloud, something I’ve never had on a mountain before. I was glad we were being led by a Ranger, and it was actually quite cool to see it for the first time. Up they all come

It was really getting dark by now – time for head torches. It was fun seeing everyone with theirs on and it was clear how necessary they were! We got to the summit, and it was picture time for everyone – however not much of a picture! It was clear that it was far too windy to light the torches even for us to see them so we left them until we got down. Getting down the first bit was not easy, it was slushy and slippy and we did well not to fall. Coming down and looking back and seeing everyone’s torches was amazing! I wish I could have seen the view behind me the whole way down. 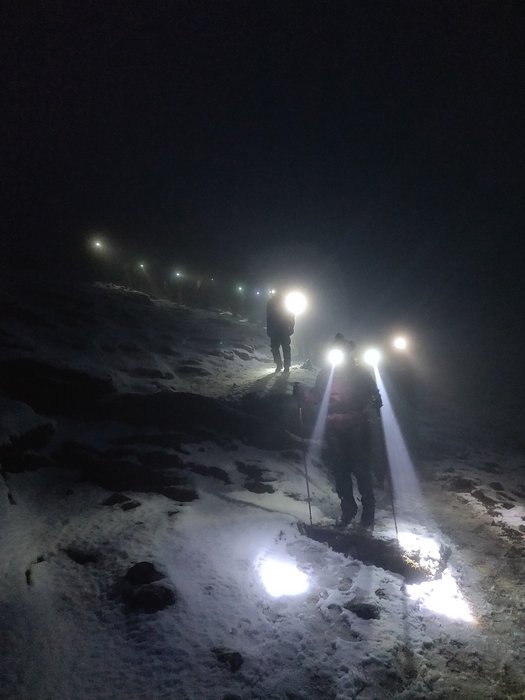 By now it was pitch black and so we had no real idea of how long it was to go. There were lights in the distance and I couldn’t stop wondering what they were. On and on in the dark the path seemed to go, and I kept up with the front of the group to get it all over with!

Gates we passed through at the beginning signified the end and we all gathered round the boot of a car to share hot drinks, soup and snacks. It was midnight when we got down and on the way home in the car I couldn’t help but fall asleep after the night before and the night we had just had. Hopefully Jennifer’s eyes remained open…

All in all bad weather or not this was an amazing experience and I would love to do it again!