Myself and my friend Jennifer were doing the North Coast 500 road trip and having spent our last night in Applecross, we had the choice of heading home and getting a rest before back to work the next day or doing a Munro on the way home. Never wasting a day of annual leave, a Munro was the obvious choice, so we went spent some time in our hostel in Applecross the night before deciding where to go. We wanted it to be at least some of the way home so we didn't have a huge journey back to Glasgow afterwards, so we settled on Ben Wyvis. I was intrigued at the idea of a Munro so close to a city.

I was in a BAD MOOD when we set off as I had developed a cold after a cold night camping a few nights previously, but I was still keen to get out. We had the Applecross peninsula to tackle first, one of the wilder starts to a journey to the mountains! I've been over this road a few times now and it's always been really cloudy, I see it as a spooky road

After around two hours, we got to the start of Ben Wyvis. There was a mile or so walk through some fern and trees until it opened out and we saw we thought was the top, however it turned out to be An Cabar. 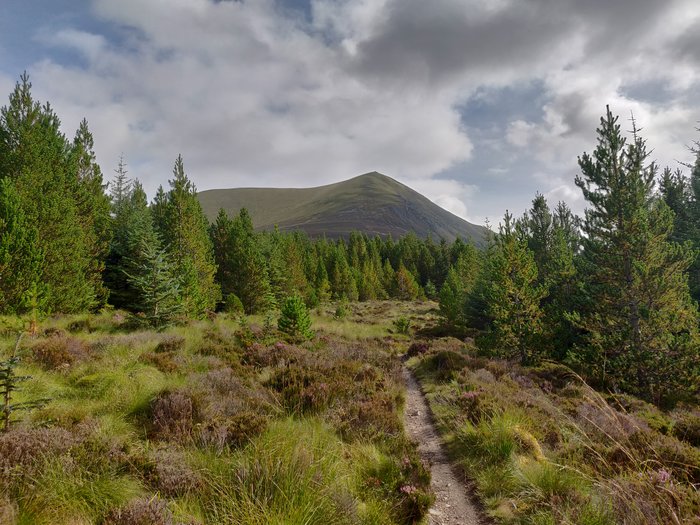 If only this was all we had to do!

There was a clear path up here which was steep but stairs made from rocks made it easy to get up. It wasn't long until we reached the top of An Cabar, and we could see over to the Black Isle, which we explored on the first day of our trip. There were cairns that had a lot of signage to say stick to the path to avoid further damaging the soil.

It was then a left to head over a plateau to the top of Ben Wyvis. This took quite sometime as it went down and up again a few times. A trig point then signified the true summit, which was a lot less significant than other Munros I've done. The plateau along to the top Posing at the top

It was very windy by now so after some quick pictures we returned the same way, which was fairly easy going, helped along by us agreeing to go for a McDonald's in Inverness after Interesting mushrooms in the trees at the bottom

I found the views on this walk strangely underwhelming - maybe it was because of all the spectacular scenery I had seen on the NC500? It was still a good day and I was glad to get it done whilst we were in the area, and was a quick and fairly easy bag.