With the snow suddenly appearing on the highland hills, I had a plan for the last Saturday in October to go down to Culter Fell - one of the hills which I've had my eye on for years without ever quite getting there. But then I was claimed for a family lunch, which meant a Sunday walk and a change of plan, so that I eventually settled on going down to Peebles for two hills there.

I was sorry about Culter Fell, but it did at least mean that I wasn't breaking my tradition of walking in the Borders the day after the clocks change, to store up as much sunlight as possible for the days when I'll see none..

I had always vaguely set these two hills aside for part of a return over the hills from Yarrow, but there's no guarantee that I'll ever get round to that trip, so I decided I might as well just get on with them.

I walked the first half of the horseshoe years ago, coming out right down the central valley, so I was starting off on what is usually the return leg - over the footbridge and across the park and up to the end of the road, and a right turn down the lane past Haystoun. It seemed once again to be a particularly colourful autumn, and trees all around were glowing in the sunshine. It's a very pretty valley which opens out beyond the houses, still with the autumn colours on the lower slopes. Further in again the track begins to rise above the base of the valley - I walked right out here once before, but this time I wasn't going too far in before turning onto the hills. Beyond the wall which marks the end of the little plantation I turned uphill, through a few larches and across the hillside to the top of the little ridge, with the oddly shaped Newby Kips behind. 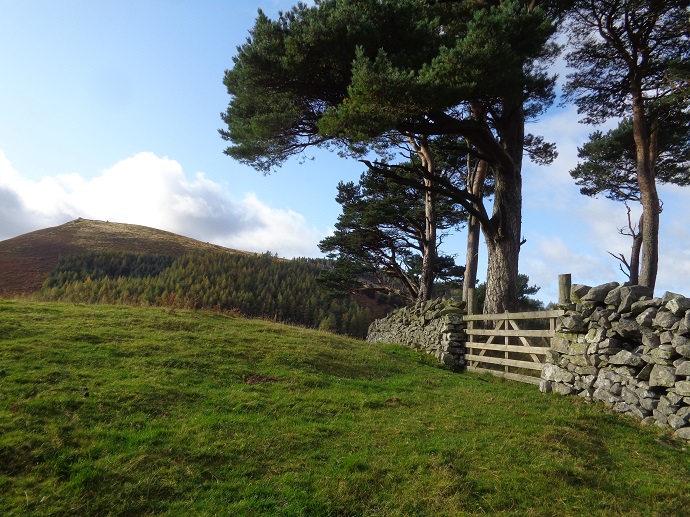 The hills were still autumnal, although not as colourful as the valley, and a path led on as a green line through the brown heather. An odd stone ruin is marked on the map as a settlement, although it doesn't really look big enough for that. The path turns into a much broader track, which comes climbing up sideways from the valley, and seems to be access to shooting butts. Back on a track

Although I was climbing along a ridge it was still more or less in the valley, with higher hills on either side, but the dip between Newby Kipps and Preston Law gave an intriguing glimpse of the hills to the west - Cademuir in the foreground, and the Broughton hills, and the Black Mount beyond. View through the dip

It was still a long slow haul to the first top in this little horseshoe, which isn't a Donald, but does have the trig point, and the name of the area, Hundleshope Heights, written across it on the map, although the name of the top itself might be Scawd Law. 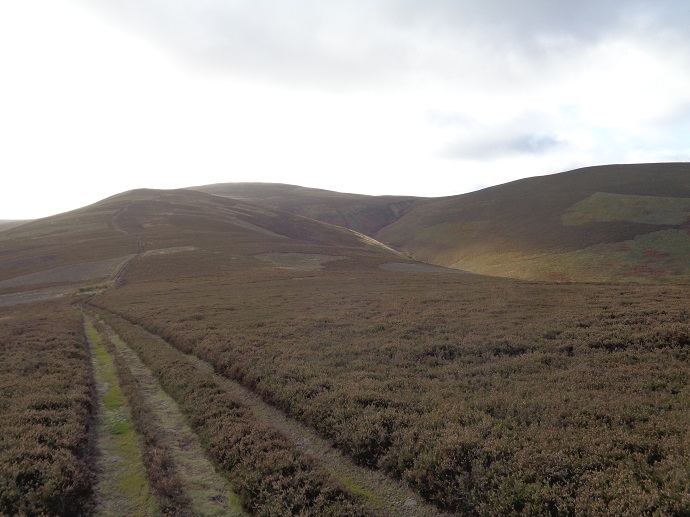 On the map the track led straight up to the trig point, but in reality it curved oddly round the edge of the hill, so that I eventually cut across from the side to the slightly higher true summit. There was a really good view from here into the Broughton Hills, with green fields tucked between the ridges. The trig point is just on the edge of the north slope, looking up towards the Pentlands. I tried to find a sheltered side to eat my lunch, but it was pretty cold wherever I sat. From the top of Scawd Law there wasn't much to say - another steady climb on over rough grass, meeting a fence part way up, until I reached the summit of Middle Hill, marked by a little cairn. 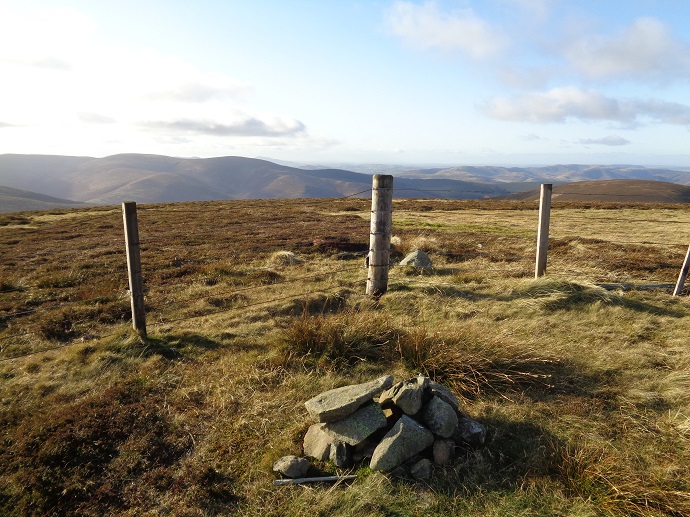 Beyond that the ground climbs again to the main ridge of Dun Rig, but I'd been up there before - my route this time was to retrace my steps for a bit and head off to the left over Broom Hill, keeping to the fence this time. The wind was blowing cold up here, and I was missing my hat, which I'd lost the weekend before and was hoping to have returned to me the next weekend - but the sunshine was glorious at the same time, and I was glad to be out in it. On the far side of the hill I had an intriguing glimpse into what seemed to be a secret valley, hidden from the main Manor valley beyond by the bends of the hills. I cut the corner slightly to join up with the fence again as it ran downhill towards Stob Law - there was a bit of a path on this side, but not the track it had been earlier. Downhill with a view

By the time I started climbing again the little path had turned into a kind of shaved strip. It was a bit of a toil at first, but I settled into it so well that when I reached the top I forgot all about the summit somewhere off to the right and just kept on going down again. 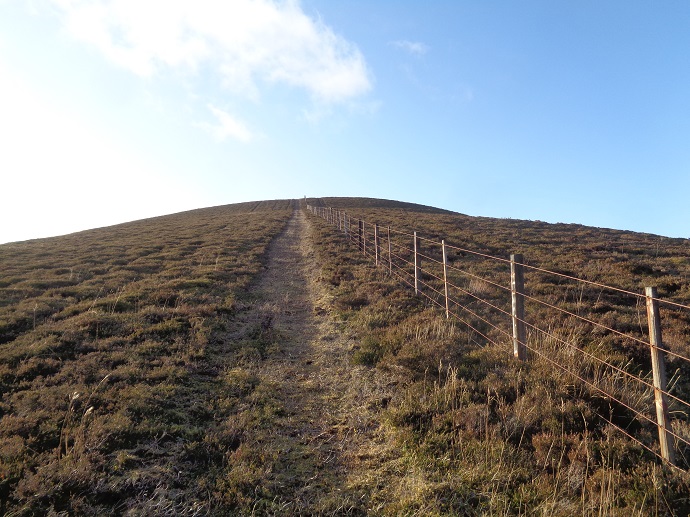 I caught myself before I'd gone too far, though, and turned back and up to the tiny cairn in the heather. 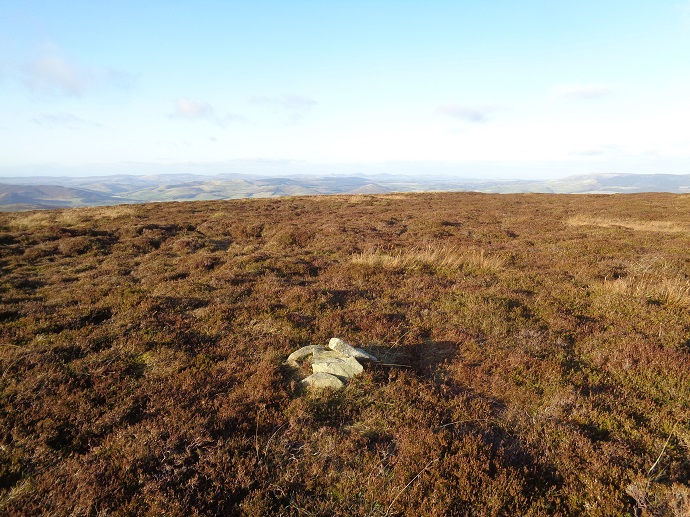 I had two options from here - the sensible one of following the fence round over Canada Hill, and the direct one of heading straight down into the valley of Hundles Hope itself. With heather underfoot I really should have gone for the sensible one, but I love the narrow valleys, and heather is great fun to bounce over - for a while - so I'd set off downhill before I really thought about it. And the view ahead was lovely, low hills spread out to the horizon. I had been absolutely certain I would be the only person on this side of the hill - there hadn't been many on any side of it - but I was wrong - as I came down I could hear shouts below, and could only hope that they weren't shouting at me, as I couldn't make any sense out of it. 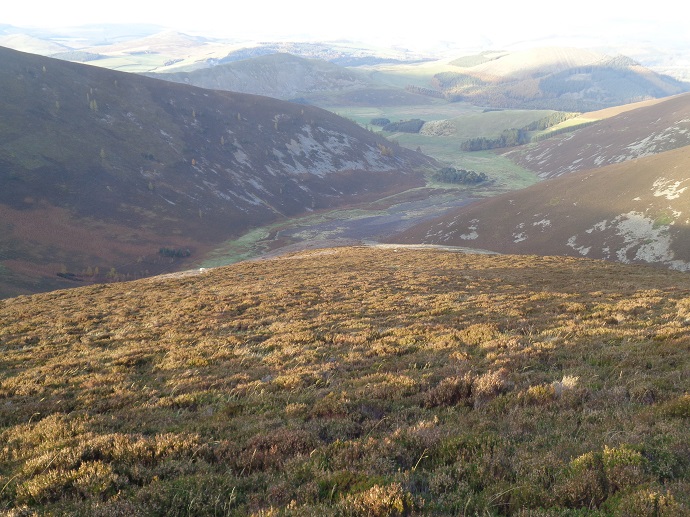 Eventually I met a lady rounding up sheep - I apologised, as I'd been accidentally chasing some down in front of me, but she said that when she saw someone on the side of the hill - where she had never expected anyone would be - sending the sheep towards her, she thought I must be an answer to prayer!

I dropped down a bit on the opposite side of the little ridge from where they were working, anyway, until I picked up a trace of path down the very last bit. It was an attractive spot, this little valley head, with a cluster of fading larches and the remains of a huge circular sheepfold. 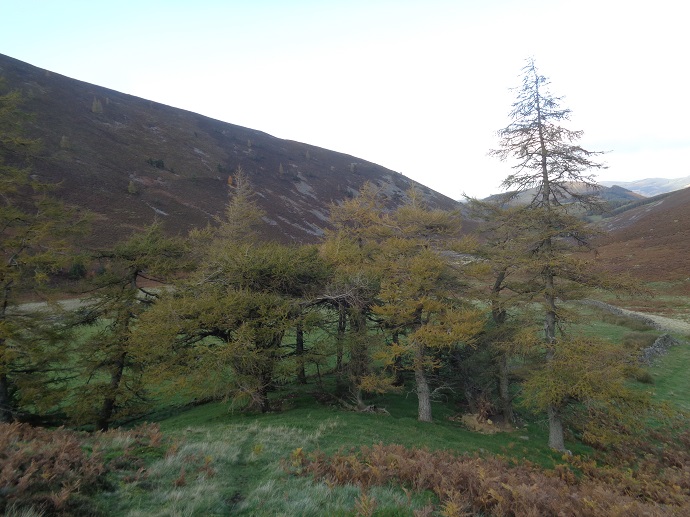 A grassy track led out of the valley, passing a little plantation of trees, and eventually reaching the walled fields near the farm, where I skirted round to the left to avoid a field of cows.

Seen from the track, the side of the Cademuir hillfort rises up like a wall, looking more impressive than either part of the hill does from any other direction. 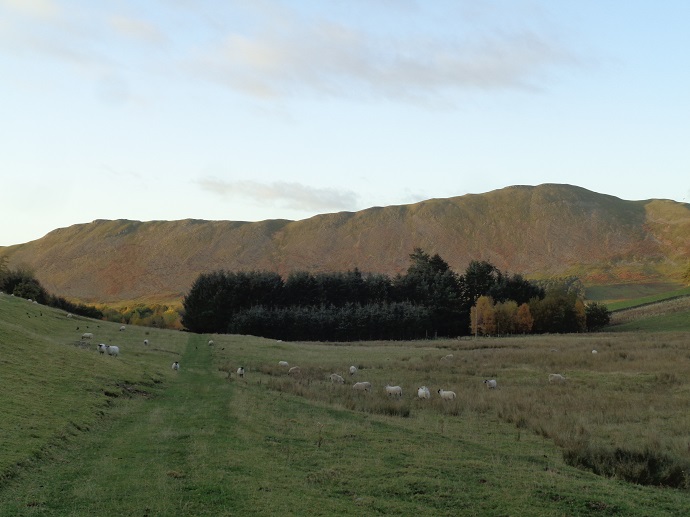 A stony track led along the front of the farm - the track which the map claimed led out to the road ahead of me was only a slightly worn line down the side of a field, blocked by a wired gate too shoogly to climb, but I realised that I didn't actually need to reach the road here at all, and would be wasting time if I did - the farm track I was on led straight along to meet the road beyond a great bend which brought it much closer. 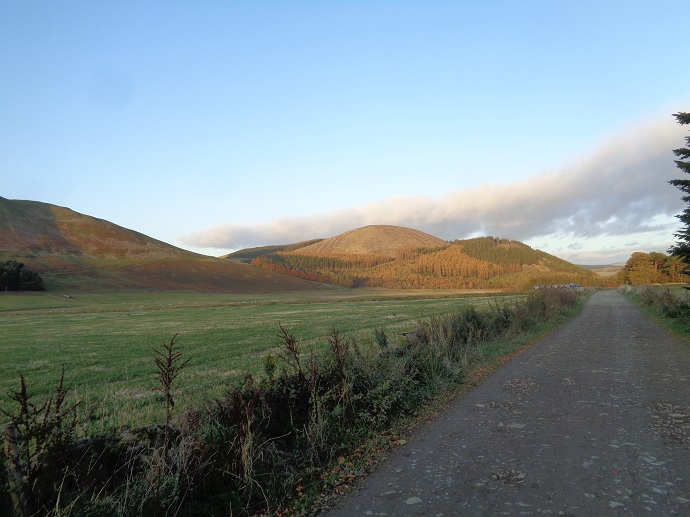 I'd walked part of this road before, coming out to climb Cademuir Hill from the forestry car park - I still had a fair distance to go, but it was just a case of plodding on, along the side of the hill and past the car park to the first houses, with the autumn colours still glowing around me until the light failed.

Re: Hundleshope and other heights

A lovely walk that - we finished our horseshoe in Hundleshope too, which was one of the most scenic glens I've walked in in the Southern Uplands. That secret glen seems to be Glenrathope. Never got round to that area but Macbeth's Castle and Cademuir Hill still ask for a day out! That photo of Cademuir is amazing

Re: Hundleshope and other heights

The Manor valley and surrounding area is probably my most favourite of places and much missed during the lockdown. Very nice report, thanks. The 'secret valley' is indeed Glenrathope and the 'settlement' noted on one of the photos is part of the remains of a bivallate fort, see https://canmore.org.uk/site/51242/waddenshope The dry stone walls are a modern-ish addition.