The days before lockdown: winter in the Cairngorms

The days before lockdown: winter in the Cairngorms


It's been over a decade since the first time I climbed the Feshie Munros, but I always fancied returning to this area for a winter trip. In December 2018 we revisited Sgor Gaoith but the day was too short to continue to Mullach Clach a'Bhlair. Besides, we liked the WH route for this one and kept it in mind for a longer, early spring day when the sun is shining and the snow is still crispy

Our plan was to follow the path along River Feshie to Carnachiun and use the Coire Caol track to gain the summit of Mullach, then continue south to do some sort of circular. In the end, we didn't exactly follow the WH route, as we found a different ATV track on descent, which saved us a couple of km in distance. More importantly, the circular route allowed us to explore the more interesting side of Mullach Clach a'Bhlair and walk through some lovely caledonian forest.
There are two places in Glen Feshie where the walk-in path has been washed away, but we managed to cross the eroded spots with care - thankfully, the rivers were low. We met several walkers and cyclists in the glen, but up on the slopes of Mullach, we were alone. It was still full-blown winter up on the plateau, so crampons came in handy

Track_MULLACH CLACH A BHLAIR 22KM.gpx Open full screen  NB: Walkhighlands is not responsible for the accuracy of gpx files in users posts
Walking starts from the car park at the end of the public road near Achlan. As it was going to be our first Munro in 2020, I couldn't curb my enthusiasm! A new detour path has been constructed to avoid Achlan, easy walking on dry ground. We started early so had plenty of time to enjoy the walk along River Feshie. We had walked the other side of the river once, when climbing the two Glen Feshie Corbetts and I remember we crossed this bridge then: Today, we stayed on the northern side of the glen. Through the gap in the trees we saw the open mouth of Coire Gharbhlach. When we combined Mullach and Sgor Gaoith in 2010, we actually descended the slope to the right in the photo below, rather than taking the track in Coire Caol. Seemed like a good shortcut, it was a bit overgrown with heather, but nothing a well trained panther couldn't cope with. Today we had no intention of repeating this idea though

After about 4km, we suddenly came to a spot, where the original path has been washed away: 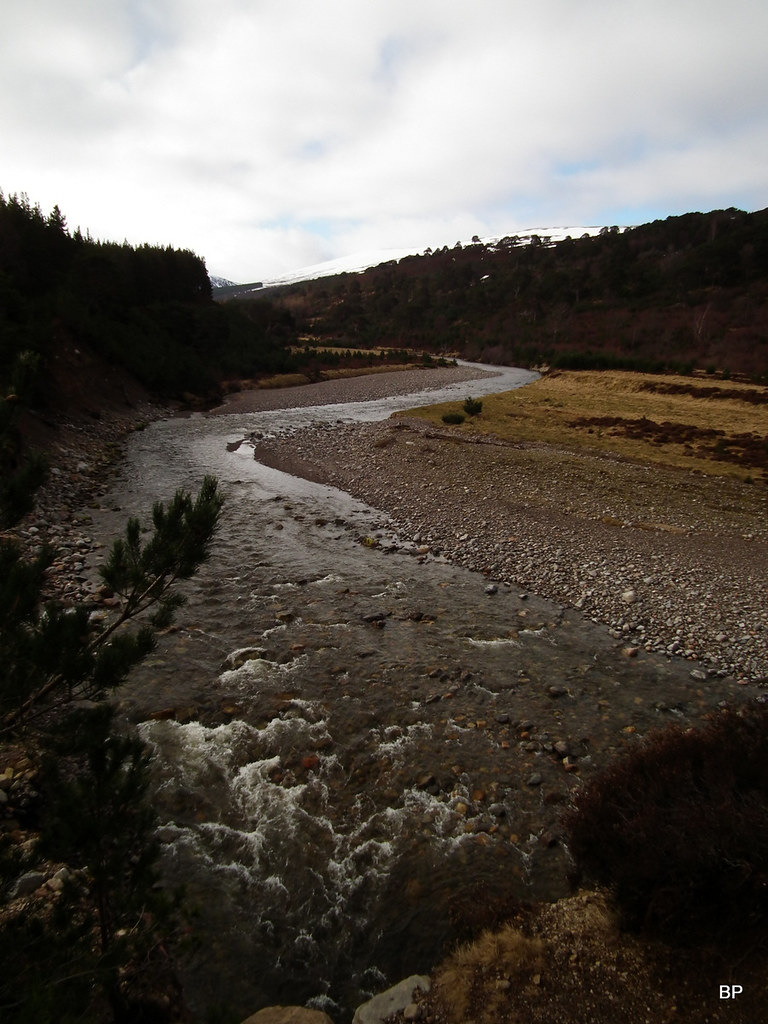 2020-03-19 glenfeshie 018 by Kevin Dalziel, on Flickr
Luckily there is a bypass. A bit eroded and steep, but manageable: 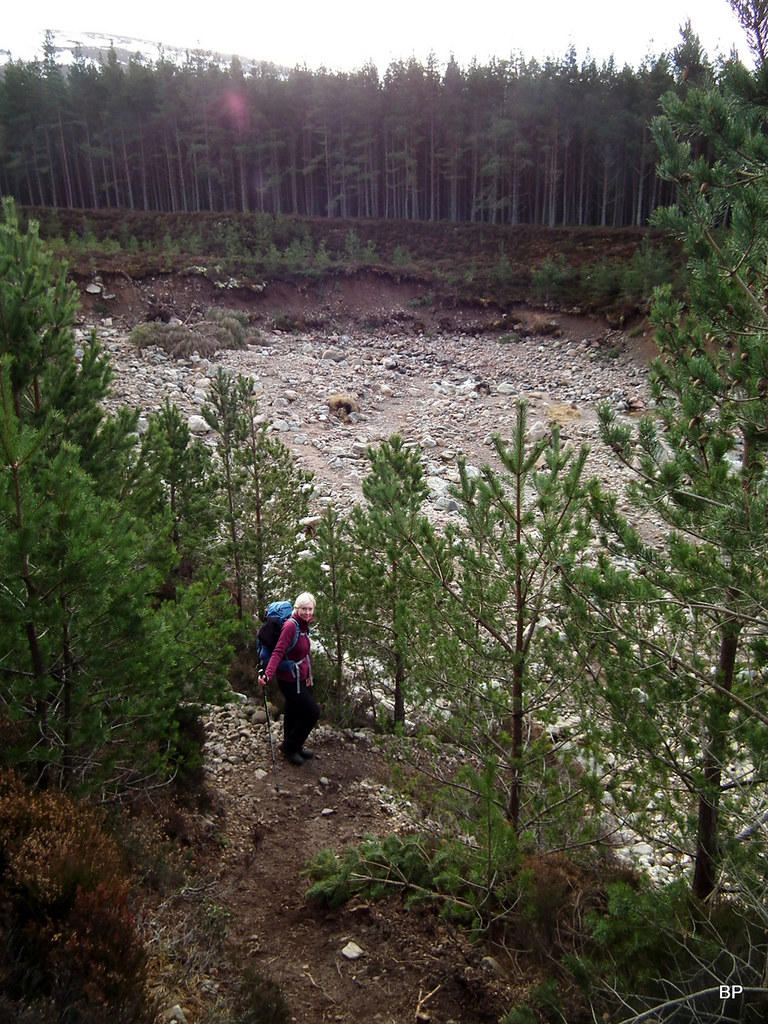 2020-03-19 glenfeshie 019 by Kevin Dalziel, on Flickr
We crossed Allt Garbhlach (might be impossible in spate) and clambered up the eroded slope on the other side. The landslide looked even more impressive from this perspective: 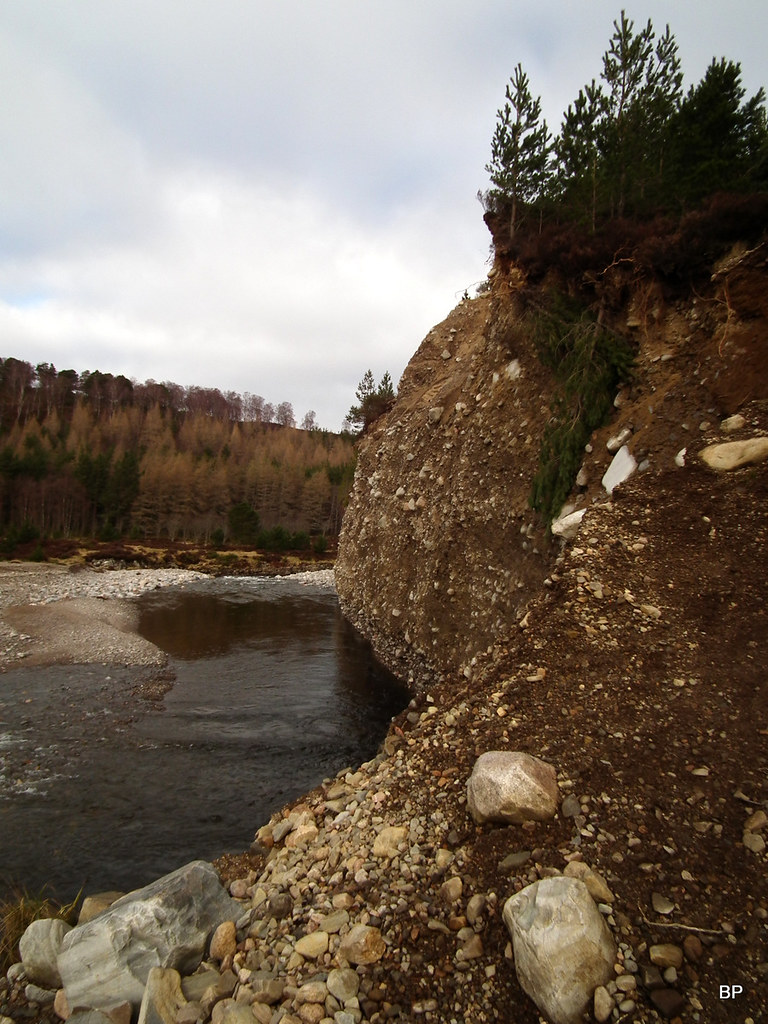 2020-03-19 glenfeshie 023 by Kevin Dalziel, on Flickr
There is another spot where the path has been washed away, about 1km further up the glen, but this one can be easily bypassed. Looking back at the vanished part of the original path, we quietly appreciated the force of nature: We continued through the forest to the junction near Carnachuin and turned left onto the estate track climbing up Coire Caol. 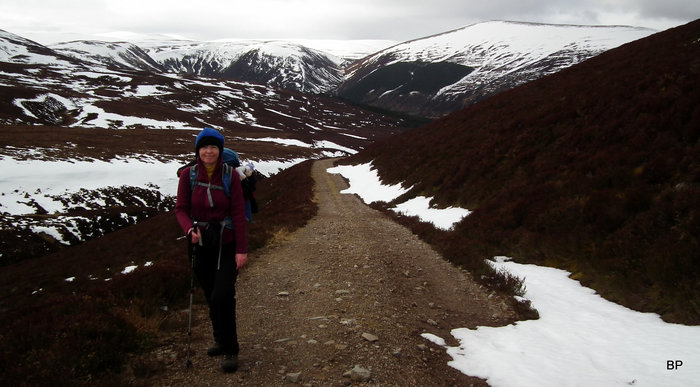 As we gained height, we wondered if Mullach Clach a Bhlair could be anybody's favourite Munro. I find it highly unlikely, unless it's somehow emotionally connected to the personal life of the climber (like it was my first ever mountain or I got engaged on the summit etc.). Mullach has always been considered something of a boring addition to the more shapely Sgor Gaoith and many people I spoke to claimed, it lacks any charm. Just a point on the plateau with decent views to the central Cairngorms, easily accessible by the above mentioned estate track:

Personally, I'm not a crazy fan of Mullach Clach a Bhlair, but even as we walked up the yellow brick road, I believed that there is more to this mountain than meets the eye... As we gained height, weather started to improve and blue sky showed up for the first time: Kevin stopped to take some zoomed photos (he was carrying the better camera today) and to his surprise, he quickly spotted a familiar shape on the horizon. Creag Meagaidh and the famous window!

More snow higher on the track:

When we reached the edge of Coire Garbhlach, we left the track for a short time and spent some time admiring and photographing the impressive cliffs and cornices. Kevin was in his element!
A happy man: The edge of Coire Garbhlach: The upper end of the corrie: The cornices and Meall nan Sleac: 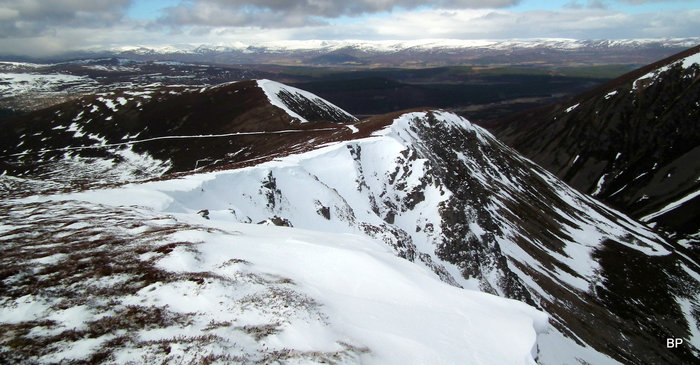 Staying safely away from the edge: The final 100m of ascent were on hard, frozen snow so after a few steps we decided we needed spikes. It hasn't been a good winter for crampons so far - we only used them once when traversing Affric Munros in late November last year. I was excited to finally be able to use my winter gear.
Its crampons time!!!! The track disappeared under snow but as weather was improving, we had no problems navigating to the summit of Mullach Clach a Bhlair. The summit cairn was hardly visible: Views from the summit ate extensive but they can only be fully appreciated in winter conditions. To the west, the central Cairngorms seem very close:

Zoom to the summit of Sgor Gaoith with two walkers visible to the right:

The full southern pano from the summit: Looking back at those happy moments, I wish I could go back in time and live through them again. Such is the impact of the lockdown and the stay-home policy, that I feel the need of inventing a time machine. Delorian would come handy...
After a short snack and tea break on the summit we decided to continue the circular by descending via Druim nam Bo: He simply can't stop smiling... What a day! Views on the way down: The descent route proved a cracking way to turn this otherwise boring Munro into something more interesting. We followed the WH route as far as Lochan nam Bo, passing a mobile weather station:

Upper Glen Feshie from above: 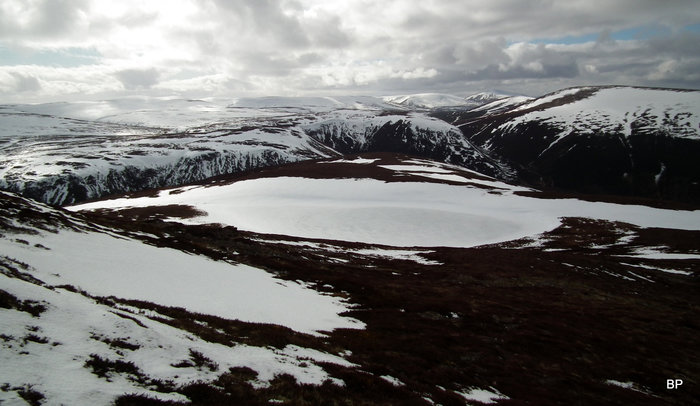 Just above the lochan we spied a nice-looking ATV track which wasn't marked on 1-25k map, but it definitely headed down along Allt Coire nam Meur, so just to vary the descent, we decided to take this one rather than the path suggested by WH: It turned out a good choice. The track is generally dry, with only one short wet section. Lower down it passes through some lovely caledonian woodland: The track crosses Allt Coire nam Meur which is no more than a small stream, follows the gorge of the stream for some distance and eventually joins the main path along River Feshie near the Carnachuin junction. All that was left now was a long but very pleasant walk through the Feshie forests and moorlands, back to Achlean: Mullach Clach a Bhlair might not be the most exciting Munro in Scotland but in the right conditions (snow and sun) it is worth doing it as a separate walk rather than adding to Sgor Gaoith. The circular route takes more time but the less known side of Mullach is definitely worth the extra hours.

Forecast for the following day was very good so we didn't waste time and visited another Munro - watch this space for more pre-lockdown crampon and axe action. In the meantime, stay safe

Re: The days before lockdown: winter in the Cairngorms

Was up at the Bothy on the bike on Sunday...first time in a while.
Must say I have always used the old path....Cairn at the place where it leaves the ******** of so called improved path. All shown on both the 1:50,000 and the 1:25,000 maps which allows for a much easier crossing of the Garbhlach burn a little way upstream of the washed away crossing. Continue on the path through the plantation and on to a wee stream crossing... Uphill on a fine old trail and pass the coming together with the so called improved path.
Surprised to see much more erosion and large pines in the river....now a struggle to get the bike around all this.
However there is now a loop around the chaos on a fine new estate trail....certainly very useful for bikers....see a wee report in the general posting place on here.
Like you I came across the track that deviates from the area where the measuring instruments are placed...Probably made by the folks, using a quad bike, who look after the instruments?
I am old and still prefer the old stalkers path that reaches almost to the door of the Bothy.