My first encounter with the Pennine Way was the few miles which it shares with Hadrian's Wall, where it seems like a wild and untamed thing, plunging off into nothingness to head for Leadgate - which is only a lone farmhouse - 7 miles away, while the Hadrian's Wall Path is content with landmarks a mile or two apart.

Since I seemed to be walking all the long distance paths in Northumberland at the time I did come up with the idea that some day I might walk from Bellingham to the end, than maybe from Alston to Bellingham along the wall again, but although I worked out the rest in three day chunks for the fun of it I really had no particular interest in the south - I don't know when or why I came up with the idea to walk the first six days together.

The plan had come a bit unstuck before it ever started, however, because I had planned to walk hostel to hostel - Edale, Crowden, Mankinholes, Haworth, Earby, Malham - and although the rest were fine, beds at Crowden simply never became available. I eventually found out from a completely different website that the YHA had closed it down and not told anyone - it was still on their website with all its information, just no availability. By that point, the best I could do was to get a bed in a hotel at Glossop, reachable by train from Padfield a bit off the route - not so bad the first day, but making a real epic of what was already a very long day through to Mankinholes on the second.

I had made my first trip to Yorkshire the year before, but the Peak District was entirely new to me - York to Sheffield and oddly a Manchester train for the partly underground journey into the Hope Valley, getting off at Edale and walking back along the road to the hostel.

The morning saw me setting off for the village by way of the field paths, to look at the Old Nag's Head and make a slightly abortive visit to the shop, which turned out only to have snacky kinds of foods, and not sandwiches - so no real lunch for me. The first stretch of the route carried on along the upper edge of the fields with a view across the valley to the ridge of Mam Tor, passing a campsite and a farm with a barn full of information before reaching the steep climb up onto the moor at Jacob's Ladder. 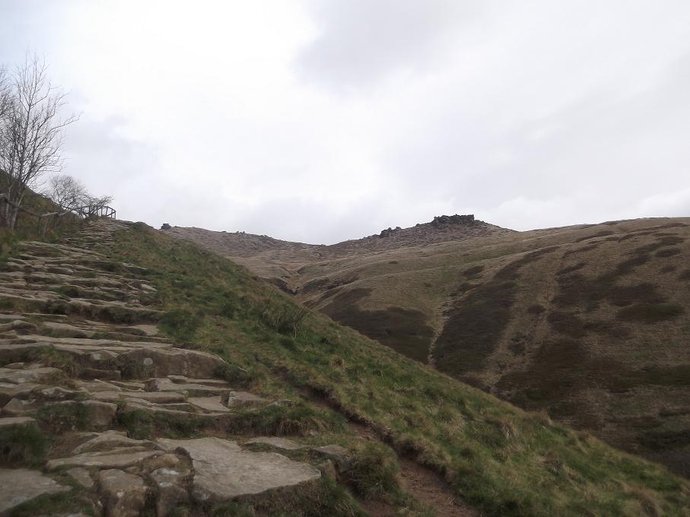 An impressive cairn marked the top of the climb, with a view back along the valley. It had confused me at first that I was so clearly walking towards the end of the valley, when I had been on a through train the night before - I hadn't realised that the train plunged into the ground, although I could look over and see the road climbing out by Mam Tor. 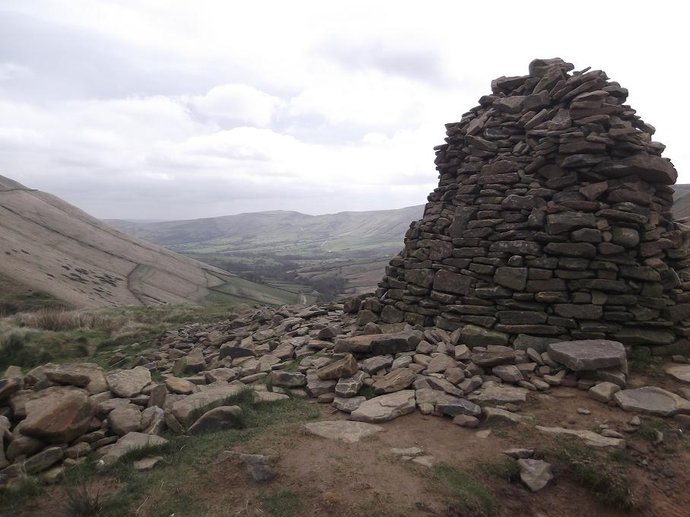 The steepest part is over but there's still plenty of climbing to do, up to the scrambly rocks, and the white trig point at Kinder Low. 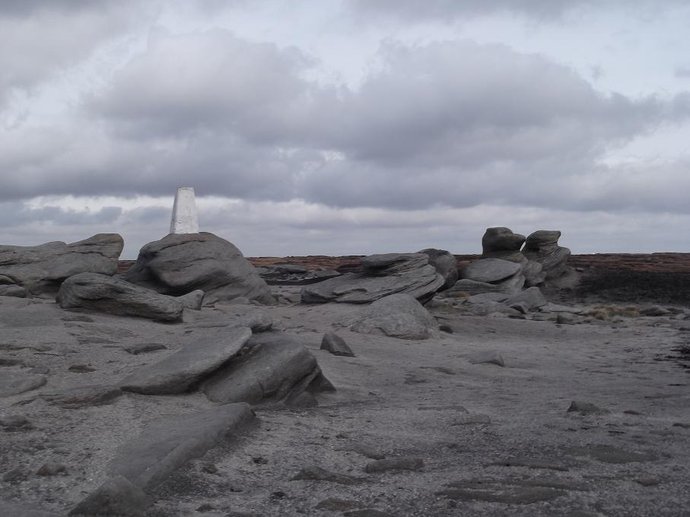 Kinder Low was an impressive spot, but I knew it wasn't the summit - even in those days I must have known that some people took this kind of thing very seriously, because I had with me a copy of the survey done to find the true summit.

This had a kind of sketch map pointing out the way to a bit of higher ground, and then a cairn with a stake in it, but in this maze of rough moor and dammed channels and mounds of peat my main navigational aid was actually just the fact that I was heading roughly halfway between the south and east edges - if I seemed to be heading too much towards either of them I just turned away from it again, until the cairn came in sight. 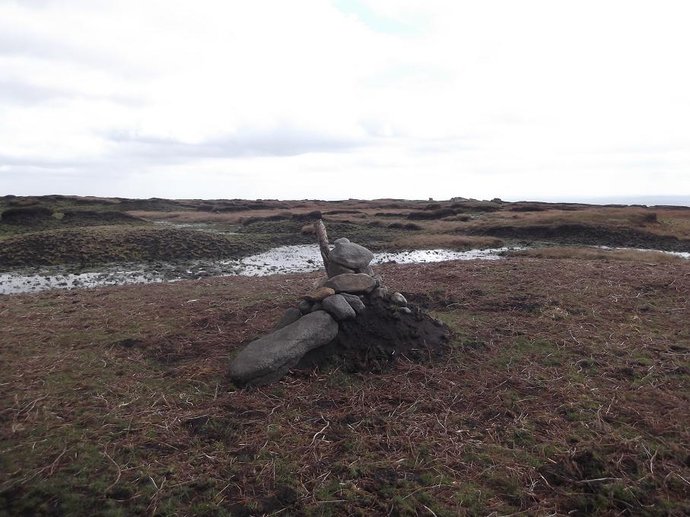 The cairn with the stake

The true top is just a small scrap of apparently tougher ground with a grassy top, but a diehard had built a tiny cairn on it. 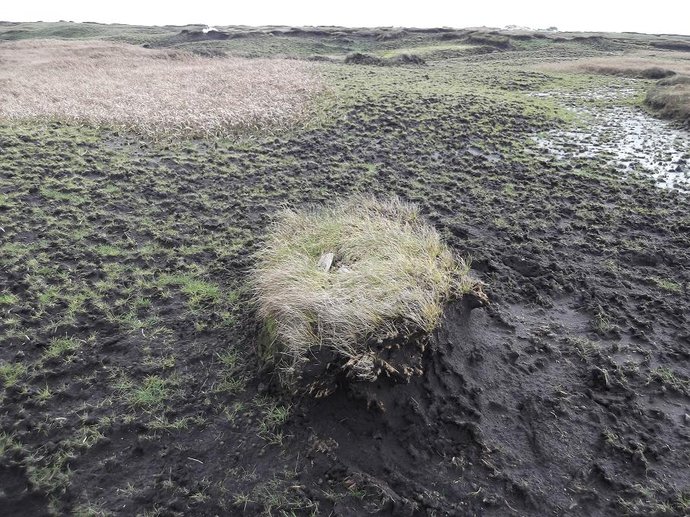 From the trig point again I was back to the far more scenic task of walking the edge, along to Kinder Downpour, which wasn't doing very much pouring. 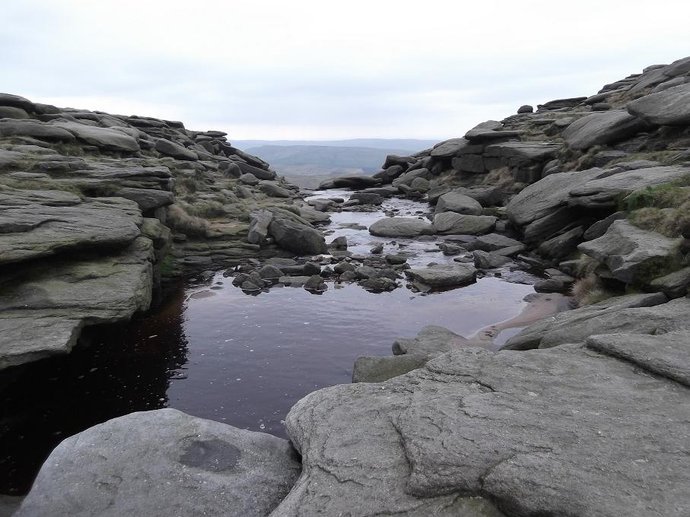 I already wanted to come back and climb Mam Tor, to the south of Edale - now, as I looked along the northern edge, I was coming up with a plan to walk right round the Kinder Edges (which I still haven't done, but is definite not off the list of things to do some day). But for the moment I was leaving the edge, heading down to cross the Snake Path, which ran off east to the Snake Inn, namesake of the famous pass. 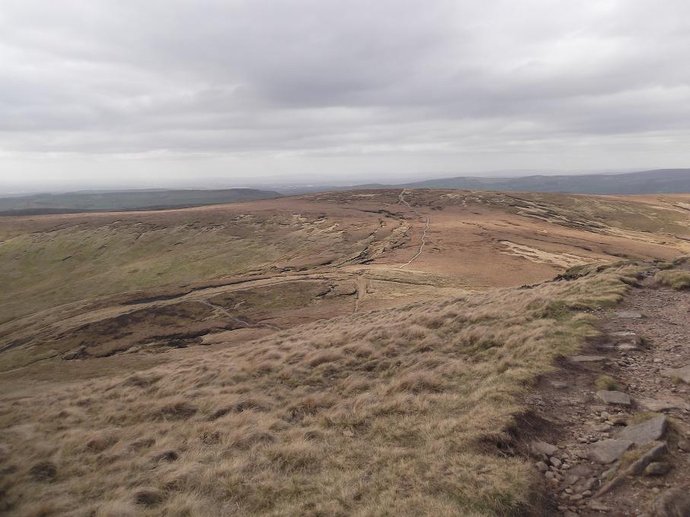 From down below you get a view of the steepness of the edges that you don't really see from up above. 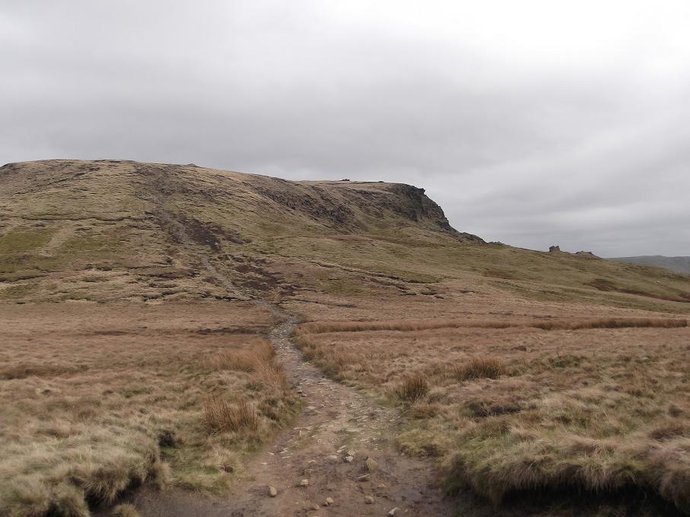 Down here a paved path starts up, and unwinds itself down towards the Snake Pass - apparently a Telford road, although I don't think I knew that at the time. 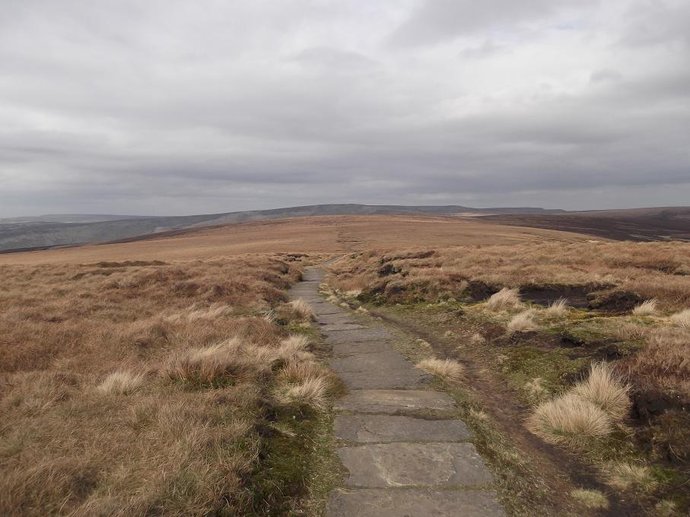 Glossop was already down below me, at the end of the road, but I had quite a way to go before reaching it, on over the second Hewitt of the day at Bleaklow Head. I decided to have a rest first, though - the path beyond the road runs through a kind of hollow, so it was easy to sit down by the side, and the book I had with me - the Wimsey Have His Carcase - turned out to start very appropriately with Harriet Vane on a long distance walk.

There were grouse all around here, doing their explosive trick and startling me - this one agreed to move at an ordinary speed for long enough to have its picture taken. 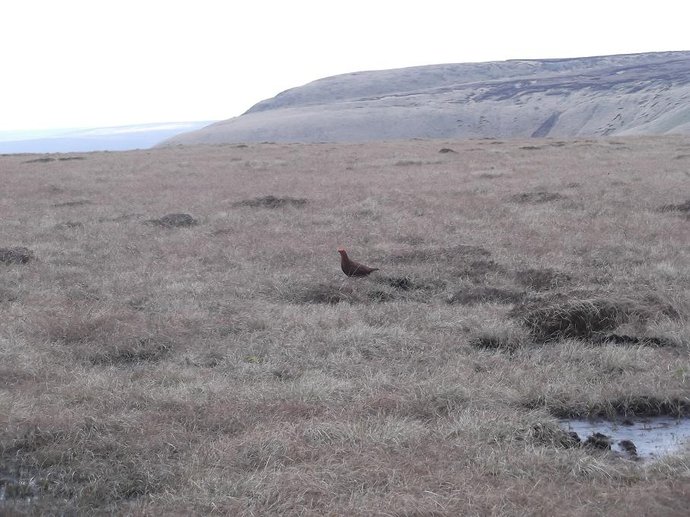 This was a lonelier feeling place than Kinder, the path tucked into damp valleys instead of perched on the edge of a wide view, and only occasional rough markers to reassure you that you were going the right way, which was quite a change from the routes I'd walked before - I could see now why this was such a challenge for the early walkers on it.

There were odd groups of stones scattered across the map and occasionally in view, although I failed to pay attention to the famous Wain Stones, apparently too focussed on reaching the summit. 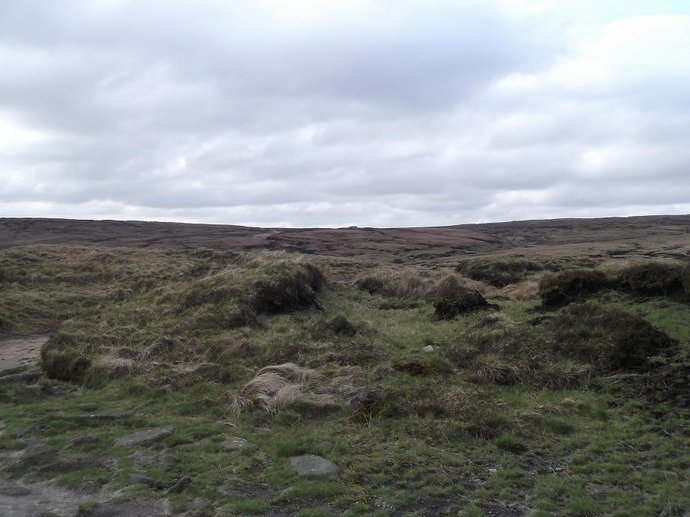 Like Kinder Scout, it has an impressive summit and a real one, although in this case they're very close together - the first is a large cairn on the path. 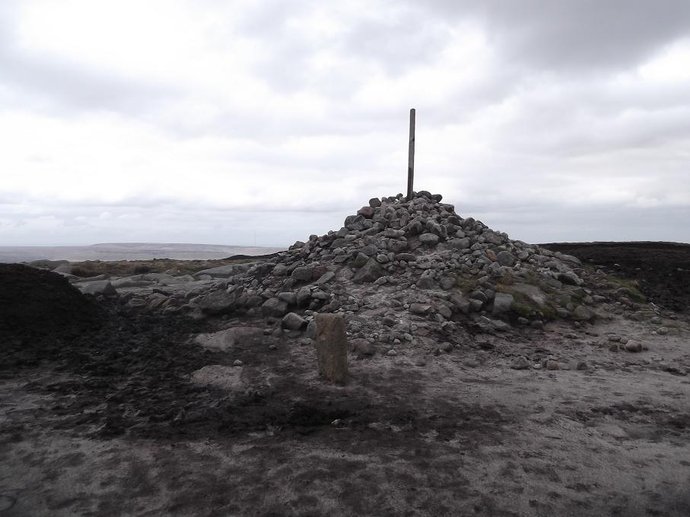 It might even have been the summit before the path wore the peat away, but some of the mounds nearby are taller now, and I climbed a couple to be sure - this one seemed to be the highest 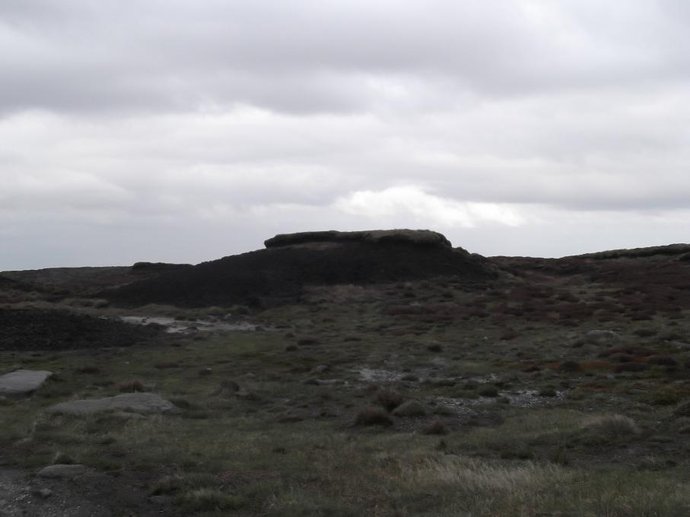 It was fairly late in the day, and I was still quite a distance from my bed - the path led on downhill, perched above another stream, and keeping high up along the edge of Torside Clough. 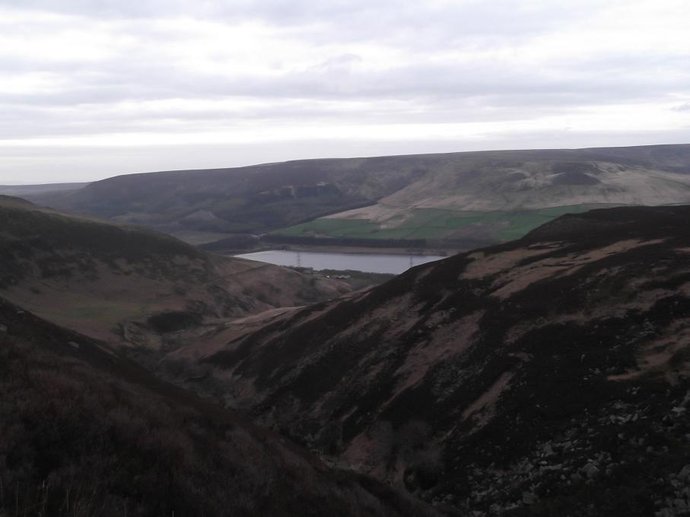 Crowden was somewhere over the other side of the reservoir, but I still had two and a half miles of ex-railway line to walk in the dusk, out to Hadfield station at the current end of the line. I had a while to wait there, but not long enough for a proper meal, and so my first dinner on the Pennine Way was kebab - not quite what you expect from a moorland day.

Fortunately the hotel where I was staying in Glossop was right across the road from the station - I meant, really, to go out again to the place across the road, which had a big sign advertising cask ales, but putting my shoes on again was too much work, and eventually I just went down to the bar where I was.