One bike between two

One bike between two


I’ve always intended to put my description of climbing remote Aonach Buidhe onto the Walkhighlands website, but never got round to it. Now in the time of Corinovirus this is my chance to find the time. This remote Corbett is special to me as it was the first time my friend and I tried out the concept of one bike between the two of us. I look at my log, photos and diary to remind myself of a fantastic day.

Stewart is more than happy to help me reach some of my remaining Corbetts, many of which are at a great distance from the nearest road. He cycles regularly, and is a much fitter walker and cyclist than I am, but his bike is a road bike. I have a mountain bike, bought specifically for accessing remote Scottish hills, and I’m ashamed to say that I don’t use it for much else, and am certainly a pretty unfit cyclist. However it would come into its own to help me attain a few remote Corbetts.

Stewart is a mathematician, and spent time before our trip working out the best method for us to use a single bike for maximum advantage to both of us. I had expected that one of us would cycle ahead, leave the bike and carry on walking, the other person would catch up with the bike and cycle on to hand over the bike to the first person. Instead I found myself with 10 minutes on the bike at a time, passing my walking friend in order to compete the 10 minutes. This sort of arrangement is only possible in remote locations where an unlocked bike is unlikely to be stolen. Our differing times on the bike took into account Stewart's faster walking and cycling speeds.

I parked in the empty car park at Killilan, for the second time in 2 days, as we had climbed Sgumain Coinntich the day before. Stewart checked over my bike, whilst I got myself ready for the day, and by 10.10 we were off. I had the first stint on the bike, which was relatively easy, on tarmac, but marginally uphill until the hamlet of Killilan. After 10 minutes I was able to leave the bike propped up against a wall, facing in the right direction for Stewart to head off. We are not much different in height, so we could each take over the bike without having to make any adjustments to the seat, so transferring from walking to cycling and back again was a seamless process. When Stewart caught me up he gave the bike back to me. 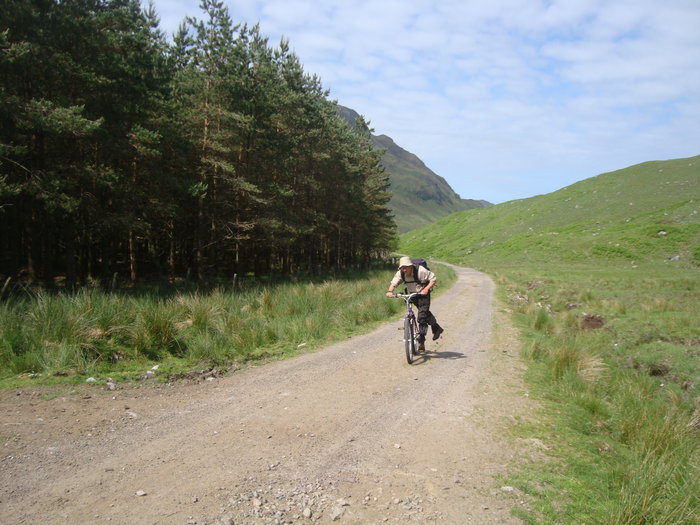 We were soon off the tarmac, but on an excellent track, with views of Glen Elchaig. We had the glen to ourselves, and the cattle mentioned in the Walkhighlands description were off the track. I enjoyed both the cycling and the walking, and was always glad to swap from one to the other, especially on the uphill parts. Loch na Leitreach showed a mirror image of the surrounding hills, and I spotted a large group of deer using the shade provided by some trees not far from the track. Stewart didn’t spot them as he cycled past. 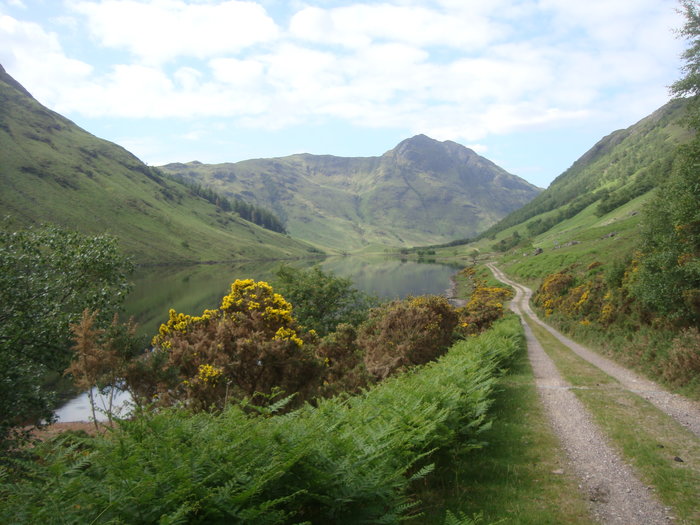 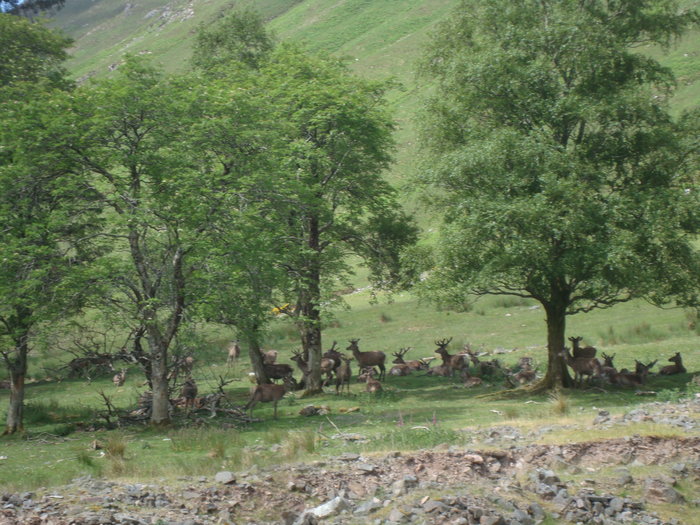 After 2 hours for the 11km we reached Iron Lodge, and the path became much rougher, so we decided to leave the bike and carry on by foot. My legs were a bit wobbly after the unfamiliar exercise. The hillside was extremely steep to start with, but luckily the sun went behind some clouds whilst we were on the steepest part of the climb, so we did not get too overheated. 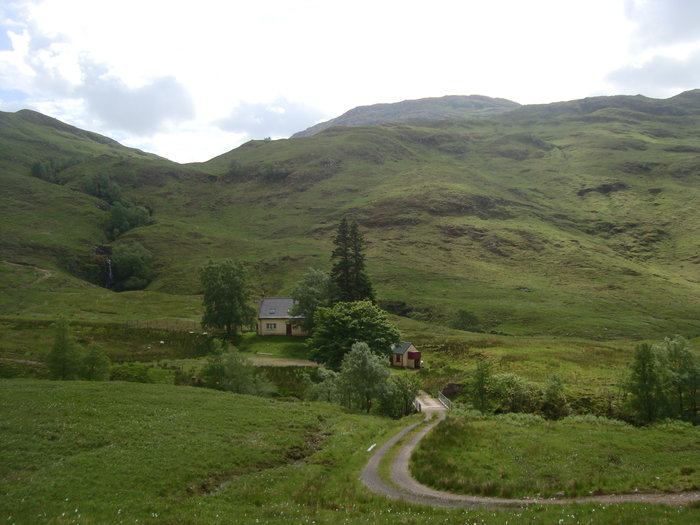 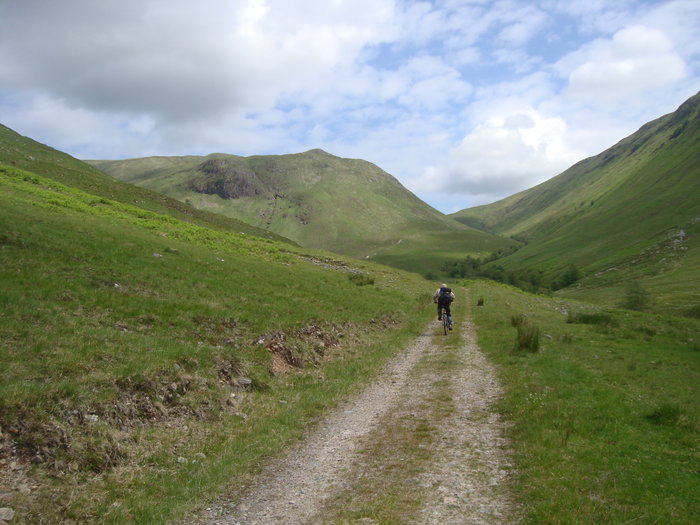 Final cycle to near the base of Aonach Buidhe 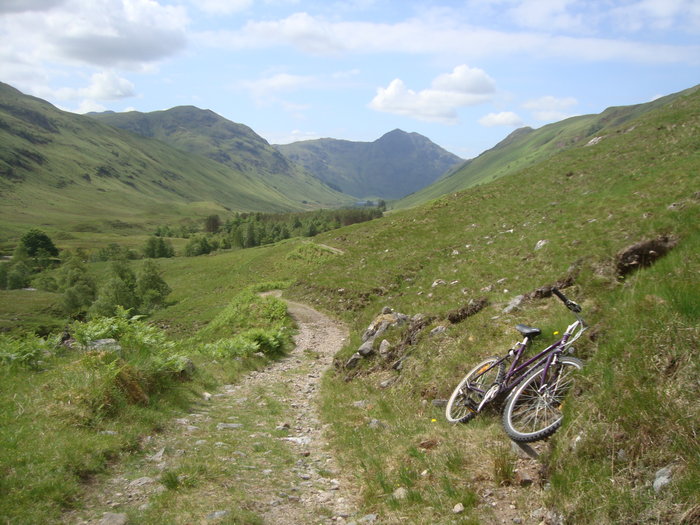 After a while the gradient relented, and the views were opening out. There were many flowers to enjoy, mainly pink ones. The ascent to the summit took 3 hours from the point when we left the bike, but we were in no rush, and the legs were tired after another Corbett the day before. The ground was dry, and easy underfoot. 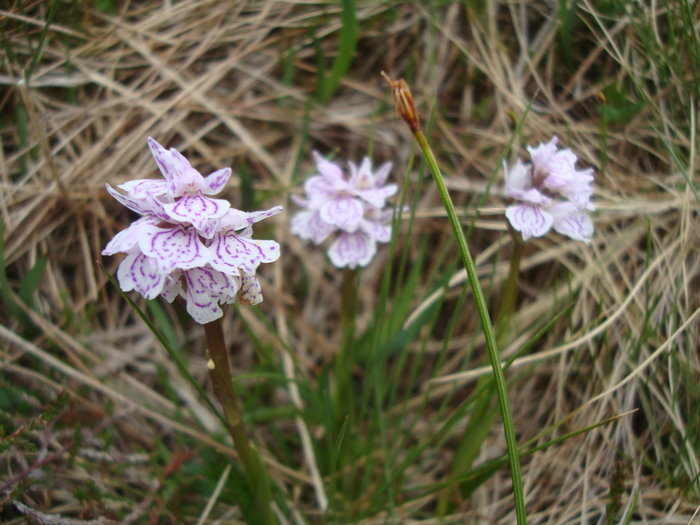 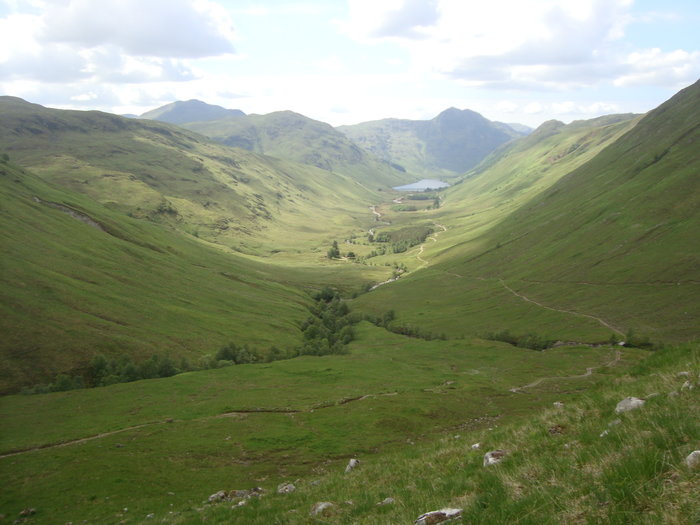 Glen Elchaig, our long route in 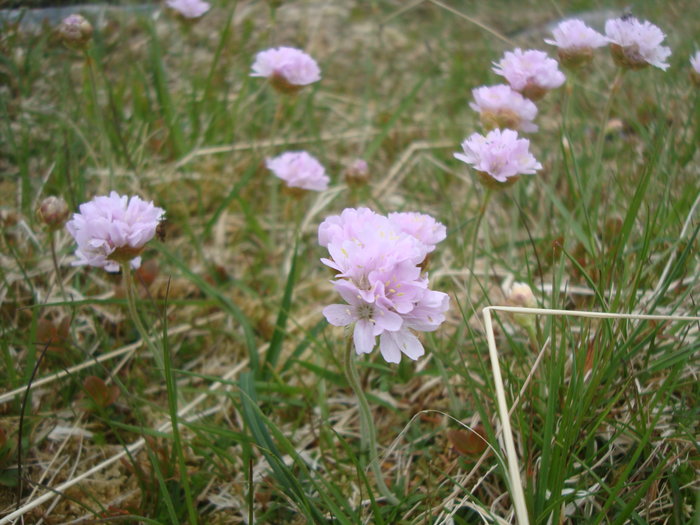 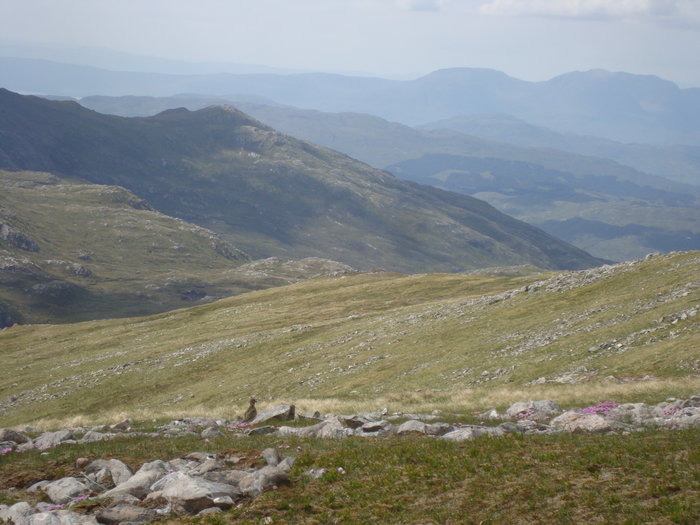 We enjoyed the remoteness of it all, and spent a reasonable amount of time at the summit, enjoying a second lunch and taking in the views of surrounding peaks, most of which I have ascended over the years. 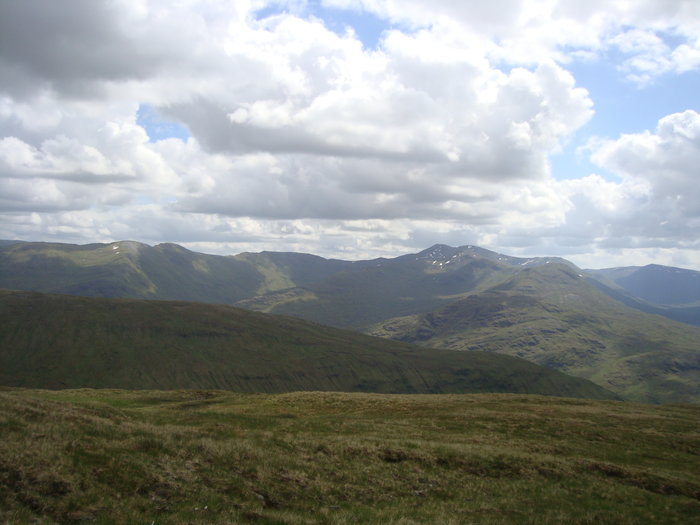 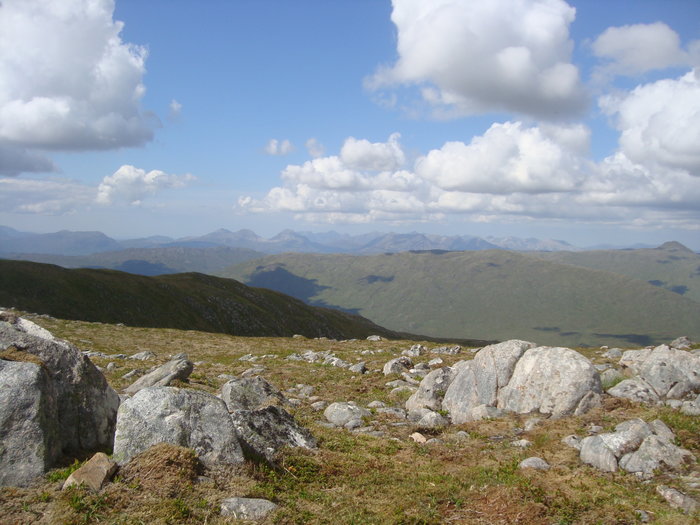 Our return walk back to the bike took us more or less on the same route, but we used the other side of the broad south spur, so it felt different, and gave us views of Doire Garbh. 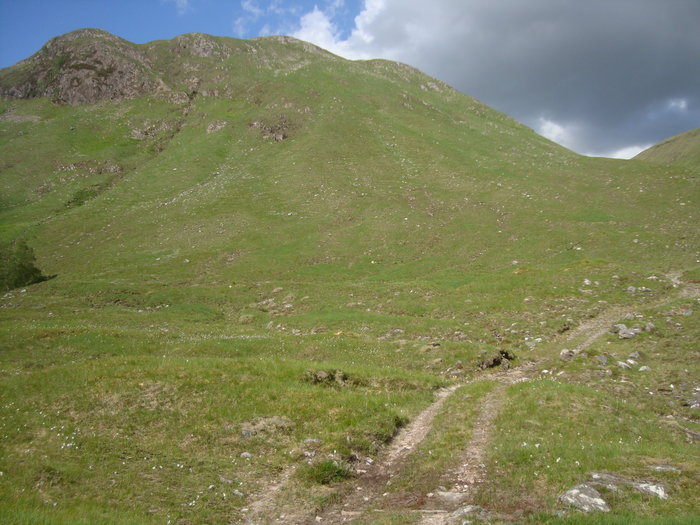 Looking back to the steep slopes of Beinn Buidhe 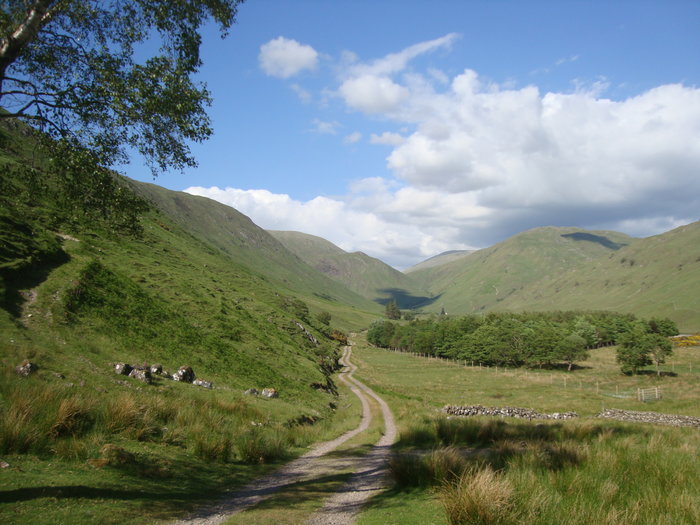 At Carnach. The beginning of the stalkers path heading towards Faochaig.

On the way back, just after I had left the bike beside the track for Stewart, I met a walker doing the Cape Wrath Trail. He looked extremely hot, and had a handkerchief tied over his head. ‘Whew’ he said, ‘I’m much too hot’. He certainly looked overheated. Then he added his punchline – ‘and I’m from Australia!’ I hoped he wasn’t tempted to use our bike.
Stewart kindly cycled most of the uphill bits on the way back, although we kept more or less to the ’10 minute rule’ (usually a bit less, as one can go a long way on a downhill freewheel, leaving the walker way behind). We were back at the car 8¾ hours after leaving it, 4 hours having been spent on the bike/walk in/out. Because much of the return had been on the bike I did not feel too tired, and was able to cope with the 3 hour drive back home, all thankfully in daylight, without much of a break. A memorable day, but not too exhausting as we found the bike a tremendous help.