I am finally getting round to writing up my Munros & Tops Compleation Walk up Schiehallion (by the standard route from the Braes of Foss Car-Park) from last October (2019.

I climbed my first Munro (Ben Lomond) in September 1983, while walking the West Highland Way with 2 of my newly-acquired University friends, Dorothy and Kirsty, using equipment and navigation skills gained via the Duke of Edinburgh Award Scheme in the Boys Brigrade a few years earlier.

36 years and 48 days (and 202 walks) later, I successfully completed all of the Munros & Tops (and former Tops) by getting to the top of Schiehallion by the classic route from the Braes of Foss car-park.

I had managed to round up a merry band of my regular walking cronies from over the years to help me mark the occasion in style, so a total of 24 of us set of in high spirits from the Braes of Foss car park on a lovely day on October 2019. 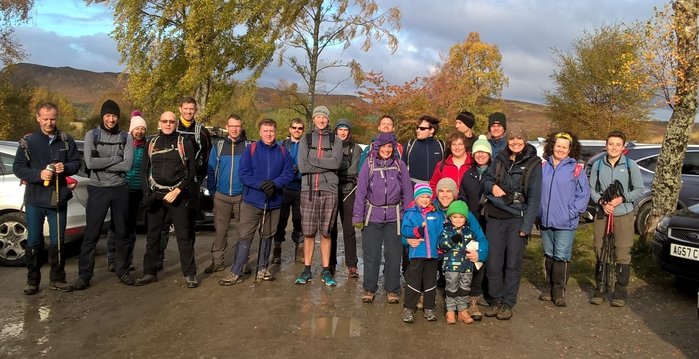 Setting off from the Braes of Foss Car Park

and soon we had formed an impressive crocodile wending our way up the well-made path that leads from the car park to the summit ridge. 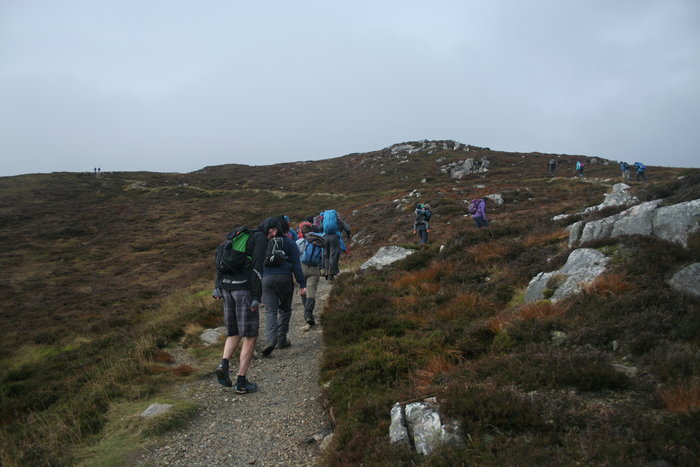 One of this group was my wonderful wife Dorothy, who I first asked out just after our West Highland Way trip mentioned above) and who accompanied me on some epic walks and wild camping trips during our early years together, including Conival & Ben More Assynt in 1991, the full South Glen Shiel Ridge and two of the easier Black Cuillin (in 1993). The party also included our equally-wonderful children, Christina & Ian, now 20-somethings and each with their own very respectable Munro tally, starting with Beinn na Lap in 2005(when they 10 and 9 respectively) and including some pretty remote Munros and obscure Tops (Knoydart, Mullardoch etc) as they accompanied me up hill and down dale during the final years of my M&T tick-fest. Who needs a family holiday in Disneyland when you can go camping in Knoydart for a week! We were also accompanied by the lovely Morag and Margaret-Anne, family friends and wives of two of my other walking buddies (Andy and Mark), who together form part of the gang of friends that have shared a number of memorable walks together over the years (since our University days in the early 80’s). The ladies put in a sterling effort to get more than half-way to the summit with us, before deciding that there was a nice bottle of wine with their name on it waiting for them back at the Moor of Rannoch hotel and they had better head back and check it was still OK, with husbands Mark & Andy carrying on to the summit party with me. 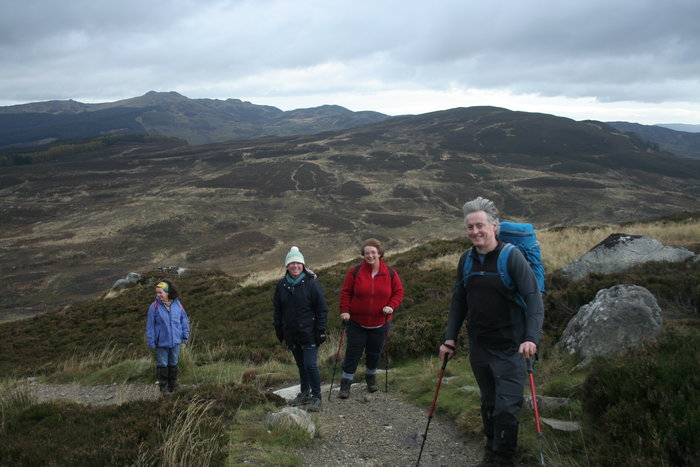 Me and the ladies who lunch!

An even-more impressive contribution to the summit attempt was made by the Haspicova/Burgess family, with Jack (aged 3) and Freya (6) cheering everyone up with their impressive enthusiasm, strong walking and GPS-based progress monitoring, before being turned back by the cold, with Jack and Dad Adam making it two thirds of the way and Freya and mum Jana making it across the awkward boulder field, before turning back somewhere around the 1000m height mark – good effort everyone! I hope you all enjoyed the day and are looking forward to your next hill-walk together (when the Scottish hills re-open for business, sometime soon hopefully). 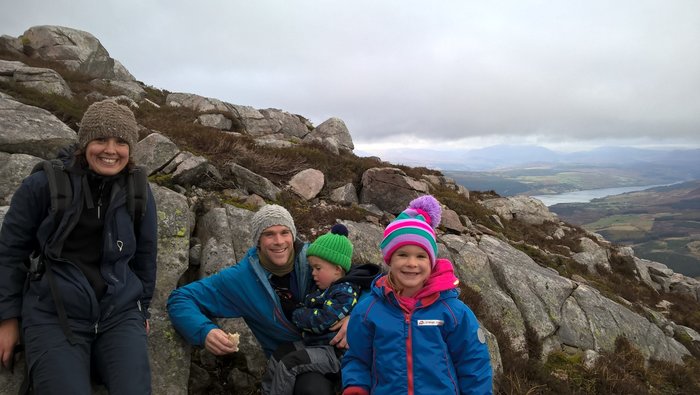 The youngest members of the party

NB This short boulder field section was quite awkward, so be careful on this section, particularly if it is icy &/or covered by a light covering of snow.

That then left 17 of us to make the final push to the summit, for photos, speeches and a celebratory toast to the finest bunch of hill-walking companions a grumpy old Munro bagger like me could hope for. Thanks again to you all for you company over the years, with a special mention to those who travelled up from far-away English-shire, Lynda H for her impressive summit poetry, Graeme S for the photography, Jeff K for his GoPro-based cinematography and everyone who bought the bubbly and the whisky (and carried it all the way to the summit). Prior to this trip, I had written an invitation to the Kirsty who had organised the original West Highland trip back in 1983 and accompanied me up my first Munro, but I had lost touch with her and been unable to remember her address, so this invite was still sitting on the mantelpiece, unposted. As we headed back down the fine path back to the Braes of Foss car park, I was therefore amazed to bump into Kirsty’s husband Andrew and daughter Catriona, who, in a strange coincidence, had decided to climb Schiehallion together that day. I can only imagine how freaked out I would have been if Kirsty had also been with them and I had bumped into her on the summit of Shiehallion, 36 years and 48 days after she had first introduced me to the delights of Scottish hill-walking.

This enjoyable and memorable day out in the hills was capped off by a great night in the Moor of Rannoch hotel, where half of the party were based for the weekend, with the remainder using the equally-excellent Bridge of Gaur guesthouse, using a very reasonably-priced demand responsive bus service to travel between the two venues. Can I therefore give a big-shout-out to Scott and Steph at the Moor of Rannoch, Heather and Eddie at the Bridge of Gaur Guesthouse, and Jürgen (aka JR Services) for the great contribution that you and your staff made to a most-memorable and enjoyable M&T compleation week-end. I hope you and your respective businesses all make it through the current Covid19 crisis unscathed.

Now, where did I put the Corbetts guide book?

Looks like a forced hiatus before the Corbetts, but you will LOVE them. Congratulations on getting the Munros. What is your compleation number, or haven't you checked in with the Clerk of the SMC?

Over twice as many have completed since I did in 2004. Really very popular now, but an achievement nonetheless., and far fewer people do the tops.

Congratulations on your compleation, a stoic effort!

That was quite a crowd set out with you to share the moment.

I still have to get up Schiehallion