The days before lockdown: Beinn a'Chaorainn

The days before lockdown: Beinn a'Chaorainn


This was our last "proper" mountain before the lockdown started and looking back to that day, I can literally feel my heard bleeding. I miss the hills. If we didn't have the Beauly ridge to climb every weekend (as part of our Boriswalking routine) I'd probably go completely bananas!

That day in mid-March was kind-of-bright but the distant views were quite hazy, creating the "fake sunset" effect in most pictures. The idea to climb Beinn a'Chaorainn on its own seems a bit silly for most baggers, as there is so little reascent for the neighbouring Beinn Teallach that nearly every walkers climbs both Munros together. We had done the full traverse in the past, in summer conditions (no trip report as it was in my pre-WH years) and I always fancied returning to this duo in winter. The full traverse is not difficult and can easily be done even on a shorter day, but we decided we didn't need to do them both, could just climb one at lazy pace

Plus I wanted to explore the secretive glen of Allt a'Chaorainn on the way back.

Track_BEINN A CHAORAINN 17.5KM.gpx Open full screen  NB: Walkhighlands is not responsible for the accuracy of gpx files in users posts
Parking space at the start of the walk is limited so we left our car in a layby 300m to the west and walked to the entrance of the forest. To our disappointment, most of the forest has been felled, creating quite a sad landscape: I remembered from our previous visit to Beinn a'Chaorainn, that the initial climb tot he ridge is a long, boring slog,but still looked forward to it, especially the upper sections, where we'd probably need crampons. The bottom part looked (and was) wet and slippery:

...but as we started gaining height, interesting views showed up behind us. Here, the Fersit Munros from the north: It might have been a slog at the beginning but we expected some fun and games later up, so spirits were high! About half way up the slope, there is a little saddle (Meall Clachaig) where we stopped for five minutes to prepare for the winter conditions: Grey Corries and Ben Nevis behind:

The final 300m of ascent were on snow, very soft initially but about 100m below the summit we encountered icy, slippery surface and decided to put crampons on.
Fun and games begin: Beinn Teallach from the ridge of Beinn a'Chaorainn:

The long slog ended eventually on the southern top (1049m). From here, it's only a short, almost flat walk to the true summit. But before we aimed for the top, we couldn't resist a few minutes for photos. We immersed ourselves in the pristine white world around us (well, not literally, we didn't swim in the snow

) and simply sank in the views. Maybe deep down in our hearts we knew that it was the last opportunity to enjoy the crude beauty of the Scottish mountains...
The summit behind me: Looking south past the lower top: The summit cairn was nearly buried in snow, but I managed to find it somehow: 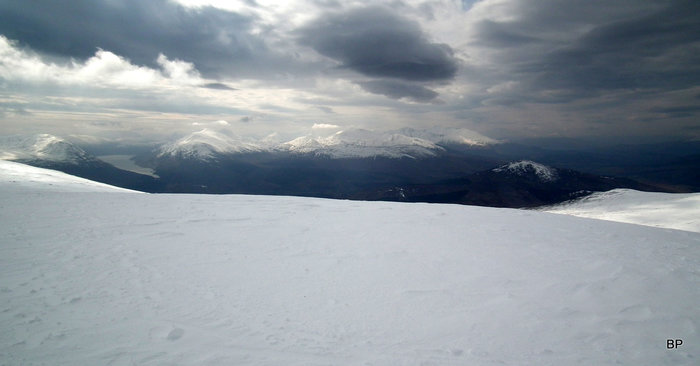 We cautiously kept a safe distance from the edge of the giant cornice, admiring it from the distance, relying on zooms in our cameras to see the details Black Panther in the white world: 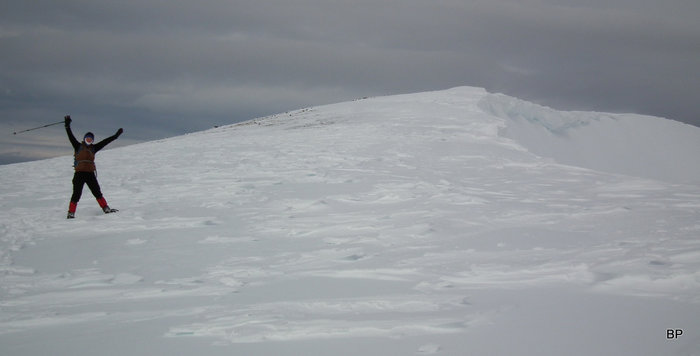 We continued along the ridge past the summit to the next top (1043m). I remembered our first visit to this Munro. It was in the middle of a relatively cold spring of 2011 and we spent half an hour sitting on the grass and gazing down Coire na h-Uamha. I might write a separate TR about this old trip - it doesn't seem I will have any material for new stories in the near future Back to 2020 and to the summit of Beinn a'Chaorainn: We stopped for a few minutes for a sip of hot tea and some sugar, we had enough time and strength to add Beinn Teallach, but decided against it out of pure laziness. We'd simply head down to the col between the two hills and then walk back along Allt a 'Chaorainn. Very few people do it as it saves no distance and only a few hundred m of ascent, but let's say, we wanted to be original "Fake sunset" over Loch Treig and the surrounding peaks: The peaks of Ardgour seen over the ridge of Beinn Teallach:

It turns out, there is a decent path/ATV track along Allt a'Chaorainn. It was wet in places mostly because of the melting snow, but we really enjoyed this alternative way of descent. Or should I say the shortcut for lazy walkers Despite the meltdown, the river was not in spate and we had no problems crossing it further down the glen: Despite only doing one of the two Munros, we still had the feeling of a Sunday well spent. On Monday, the lockdown was announced and any plans of climbing another hill (apart from quickies above Beauly) had to be put on hold. When will it end? I don't know, but I know one thing: the memories of the snow-covered slopes of Beinn a'Chaorainn are definitely a memory I'm going to cherish for a long time...