Since moving to Beauly, I wanted to visit the summit of Cnoc Udais but prehaps because it is not a significant listed hill (just another TUMP), it was always put away "for another day" as there were more interesting, more ambitious, more important mountains to climb (both literally and figuratively). It took us a lockdown to eventually reach this very characteristic little top with a couple of TV masts. And the way up was through muddy waters to say the least

Originally, the plan was to take bikes and cycle from Beauly to Auchmore via Muir of Ord, climbing to the top up the windfarm track, but that was the easy option. On Easter Monday, with reasonable weather forecast, Kevin suggested walking from home to the summit of Cnoc Udais, the shortest route leading through the forest above Ruillick and past Loch nam Bonnach. There is a path marked on the map but as we were to discover, it is more of "where is my snorkel?" experience than a path!

To complete the circuit we traversed from Cnoc Udais to Cnoc Croit na Maoile and returned via Auldvaich:

Track_CNOC UDAIS 19KM2.gpx Open full screen  NB: Walkhighlands is not responsible for the accuracy of gpx files in users posts
We started early from Beauly, when most of the village was still asleep: 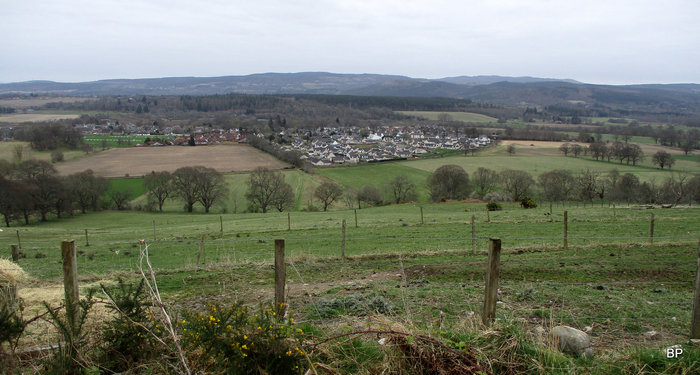 The first stage was simple: up the tarmac road to Ruilick and then into the forest, up the path along the gorge of Ruisaurie Burn: 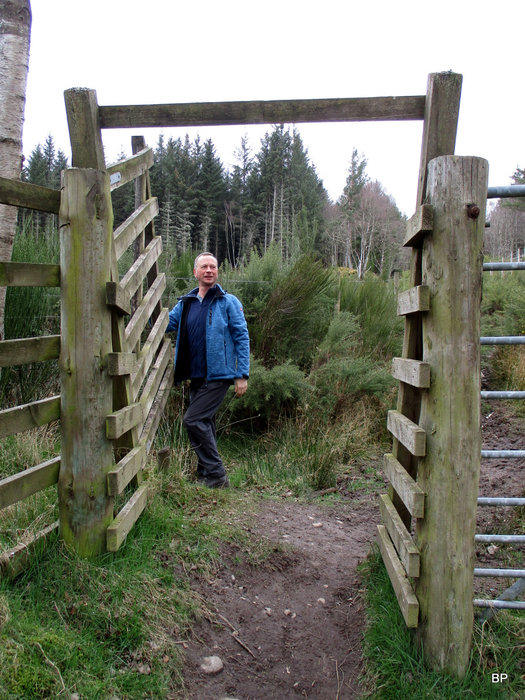 A quiet path in the woods: 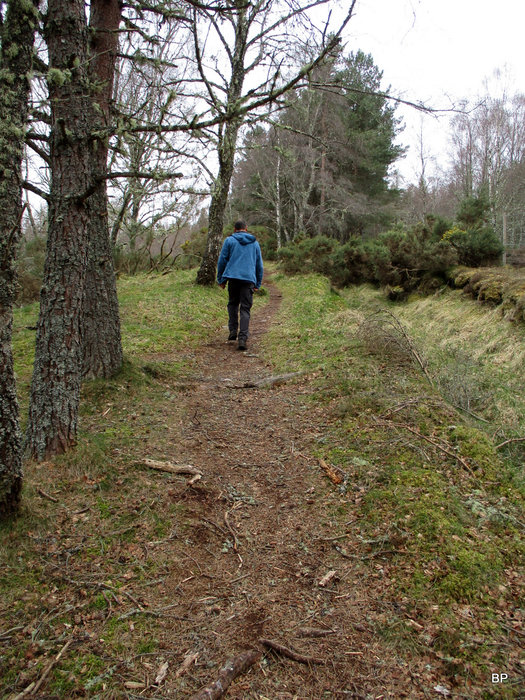 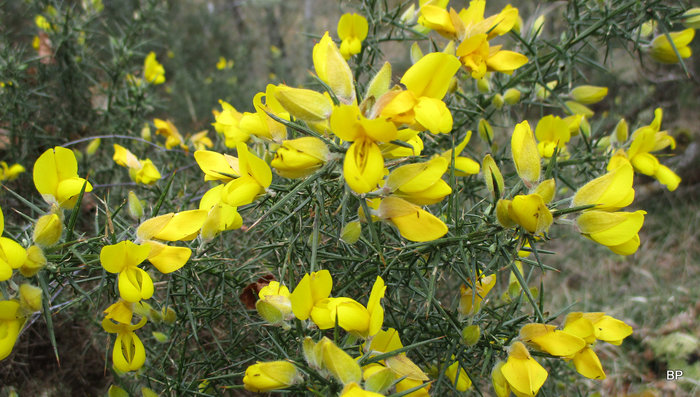 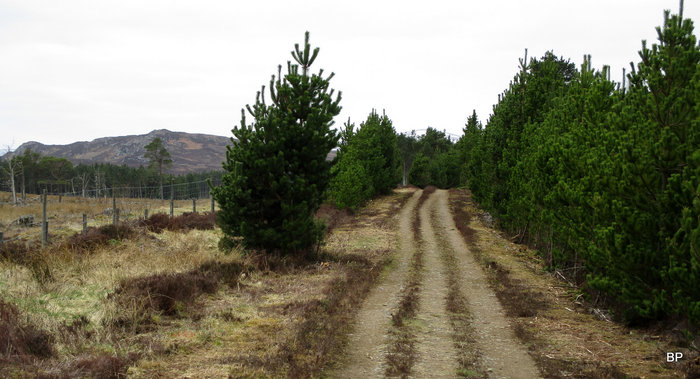 The good track ends by Loch nam Bonnach. We stopped for five minutes to take pictures across the water to out eventual target. Cnoc Udais looked very close from here... We expected it would be tough going across boggy moorland, well, we were not disappointed

We spied a very faint ATV track along the fence so followed it for a few hundred metres... Or should I say a few hundred tuft-hops?

We didn't take gaiters and in five minutes we were cursing the wet moss, grass and heather 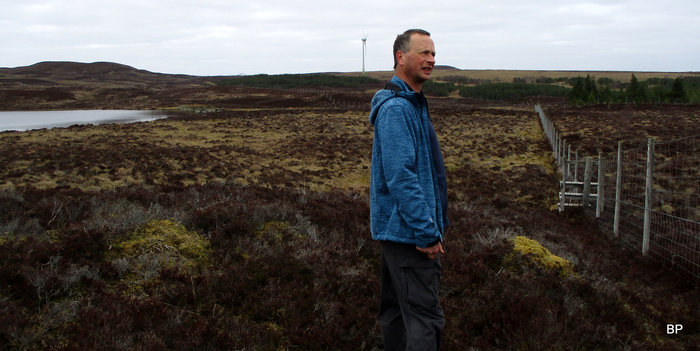 About half a km of the boggy nightmare later, we reached the NE end of the loch. There is a footbridge here, thank heavens, but even if there wasn't one, the weir was dry as the water levels in Loch nam Bonnach have dropped recently. I don't want to think how bad this area would be when fully saturated 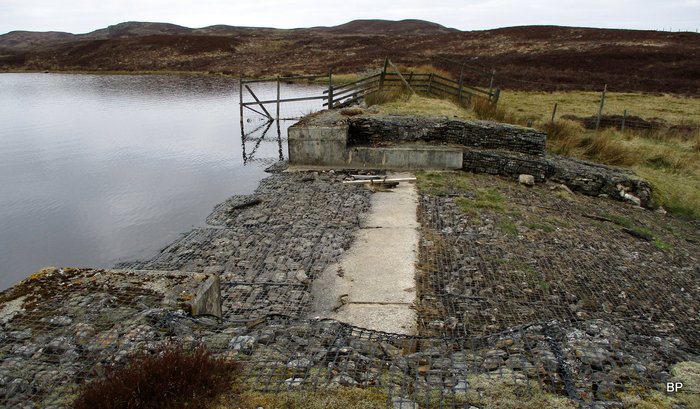 Looking SW across Loch nam Bonnach to Cnoc an Teine and Torr Breac: 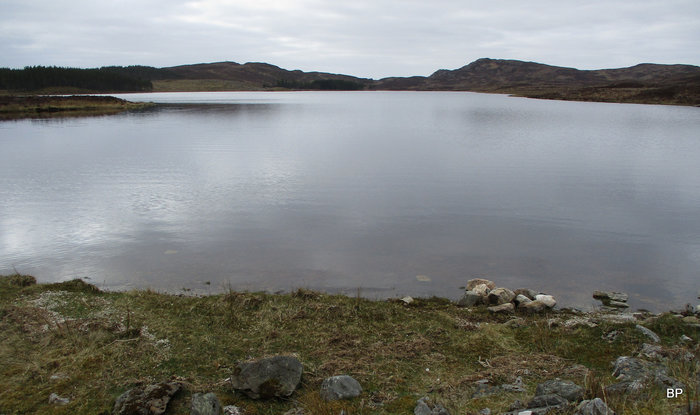 We crossed the footbridge and discovered a path (probably an old stalkers track) heading in the direction of the col between Cnoc Udais and Torr a'Bhealaidh. It was all right to begin with... 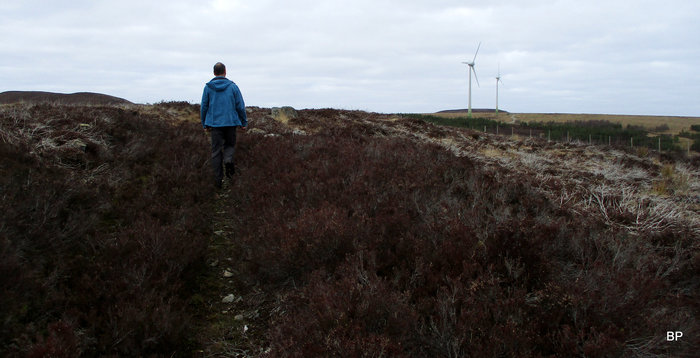 ... but after a short distance it turned into splodgathon so we left it and aimed straight towards one of the wind turbines, more tuft-hopping required!

So after another 800m of wet-and-bumpy experience, we reached the deer fence marked on 1-25k map. We looked for a gate, or a stile, but no luck this time. We had to climb over! Thankfully, the fence wasn't barb-wired and it looked solid enough to sustain our weight. Kevin went over first and then he made fun of me when I nearly got stuck with one of my legs over my head in ballerina-like position

Grrrr, I hate wobbly fences!
Once over the fence, we crossed Allt an Eun (which is nothing more than a small burn) and aimed for the nearer of the two wind turbines. Beinn a' Bha'ach Ard was now visible on the horizon: 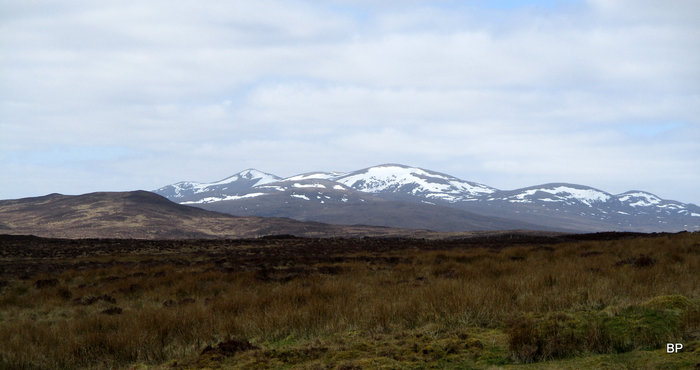 Never in my life was I so glad to see a wind turbine! 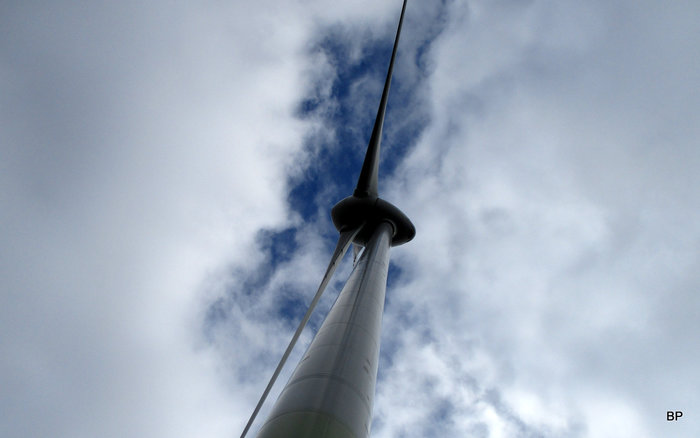 Now it was plain sailing, at least for the time being. The windfarm track connects to the one leading to the TV mast on the summit of Cnoc Udais, so walking was now smooth and dry - at last!

Ben Wyvis and Little Wyvis from near the summit:

The top of Cnoc Udais hosts an unusually big stone cairn, so big that we wondered if it was an ancient artifact? A quick check in Canmore library classifies the cairn as Bronze Age, but no detailed information is available. Was it used as a burial chamber and simply collapsed? Can't say.
With Lucy on the summit, the lower of the two telecommunication masts behind : 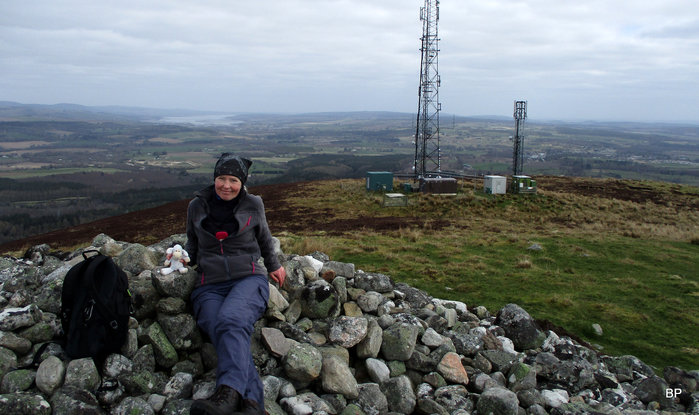 Looking south-west from the summit, we noticed an intriguing little top, Cnoc Beinn na Lice. We decided it would take too much time to add it to today's route, but we plotted another one! With so many tiny tops and bumps around here, we should never run out of options for Boriswalking, said Kevin laughing.

Two more interesting tops across Glen Goibhre - this duo a perfect target for a quick bike & hike from home:

Loch nam Bonnach and the surrounding forest from the summit of Cnoc Udais: 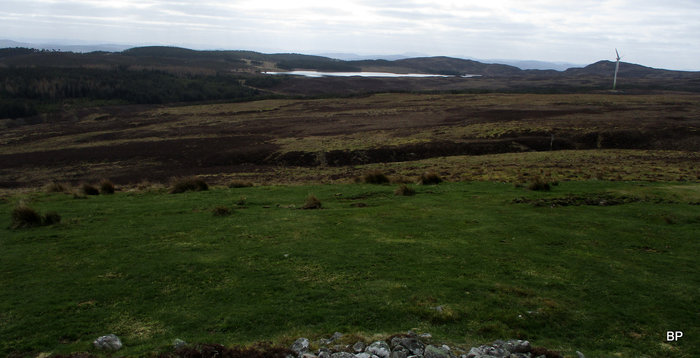 Lucy posing with Ben Wyvis behind: 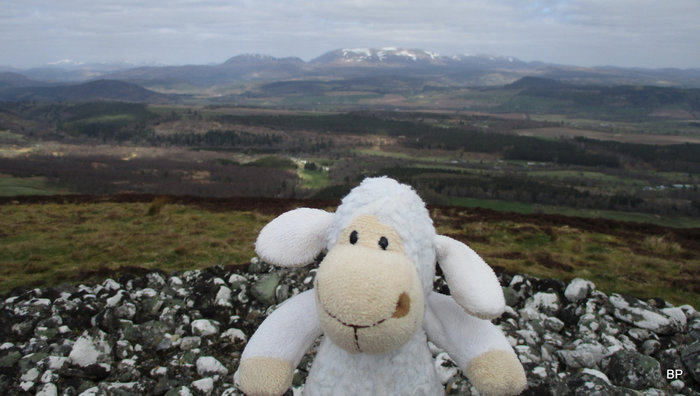 Now it was time to think about the return route. We didn't really fancy the splogathon of the northern end of Loch nam Bonnach, so the decision was unanimous: better to traverse to Cnoc Croit na Maoilie, which as a popular viewpoint, has a decent path down to the nearest forest track. The only iffy bit would be the short stage between the two tops and the crossing of Allt Fionnaidh, but we were happy to give it a go.
We found a branch of the main track heading down towards the col between the two hills and followed that till it ended: 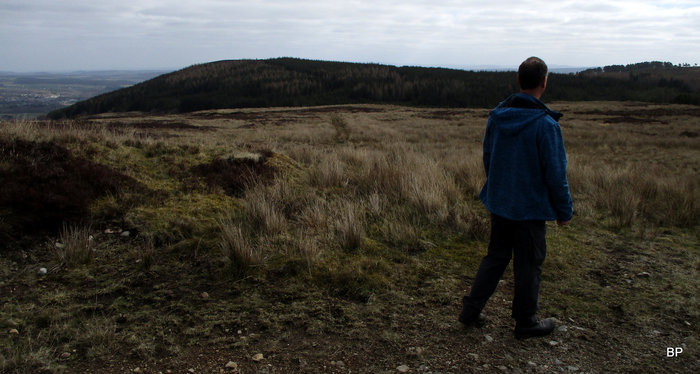 To our surprise, we found another, fainter ATV track heading for the edge of the forest: 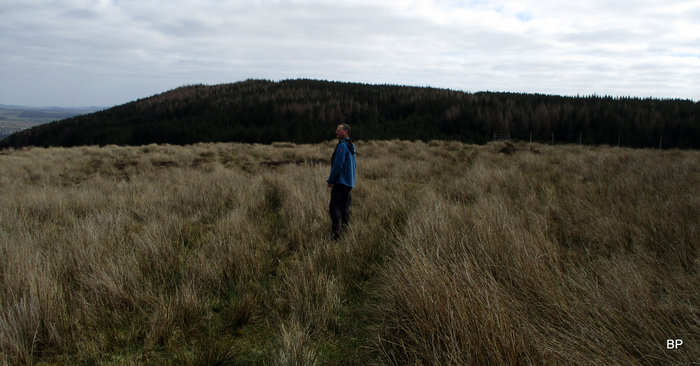 Not much water in the stream, but it was to wide to jump over around the weir... 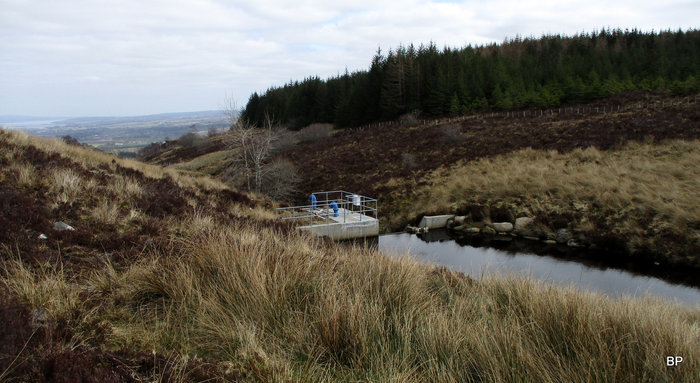 ...so we had to resort to alternative methods of crossing 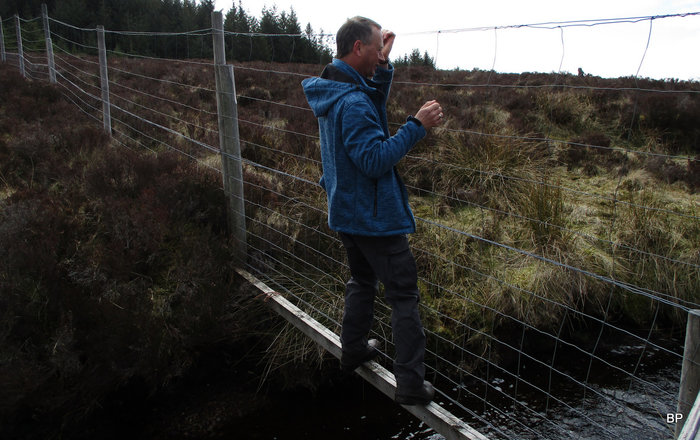 On the other side, the ground was overgrown with scratchy heather, but we soon found a wide firebreak giving access to the top of Cnoc Croit na Maoilie. There was even a path, most likely a deer track: 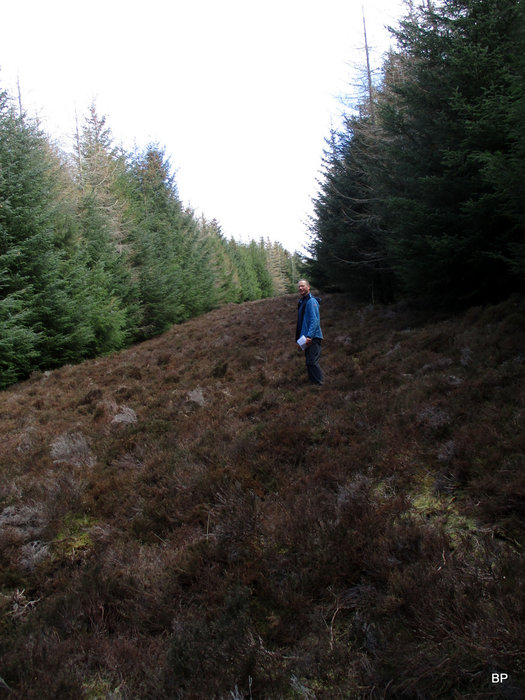 The trig point on the summit of Cnoc Croit na Maoilie: 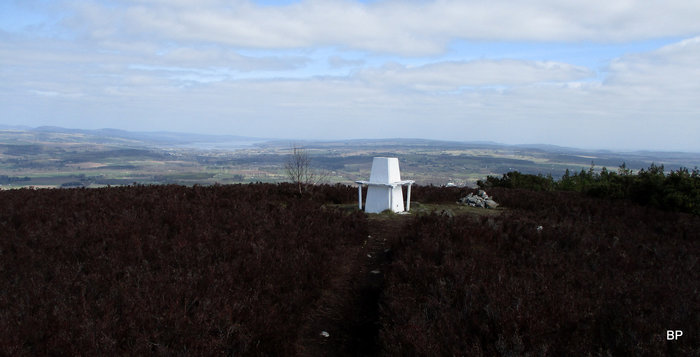 Looking back to Cnoc Udais and the more distant Ben Wyvis:

From the viewpoint, (which we had visited many times before) it was easy to follow the "official" trail down to the forest track and eventually back to local tarmac roads. Nice views down to Beauly Firth on the return walk: 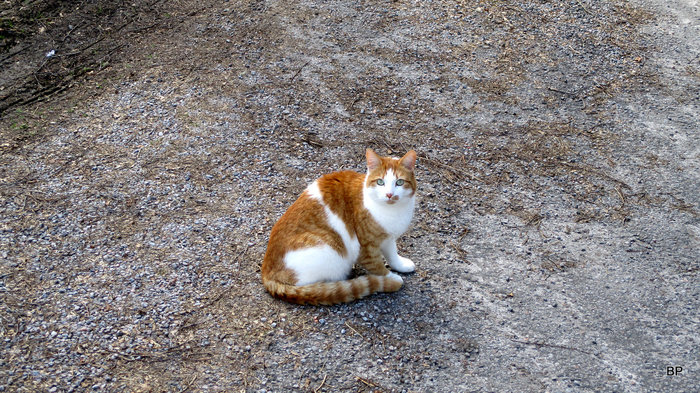 There is of course an easier way to visit Cnoc Udais, without the splodgathon experience. From Beauly it can be cycled in less than an hour and I was eager to try this alternative. But before our re-visit to Cnoc Udais, I have another story to tell, the one of Torr Mor, the forgotten TUMP of Ruttle Wood.