Another variation of our local Boris walk, this time "around Loch nam Bonnach" route, including two tops we haven't visited before: Cnoc Dubh and Torr a'Bhealaidch. Neither of them is a TUMP but we wanted to "compleat" all tops on Beauly ridge. This particular route is not recommended when wet, but in current conditions, no problem.
Actually, in recent days, I noticed that our local village stream, Bridgend Burn, has nearly dried out! Back in May, when we walked this circuit, we still encountered a few patches of bog, but even the infamous northern end of Loch nam Bonnach was no longer a splogathon.

Track_LOCH NAM BONNACH 18,5KM.gpx Open full screen  NB: Walkhighlands is not responsible for the accuracy of gpx files in users posts
We left Beauly in the morning, heading up through Ruisaurie. Weather was fine (with a chance of showers later on). A bit windy but not windy enough to chase us off 300m high tops

Black Panther in a black coat 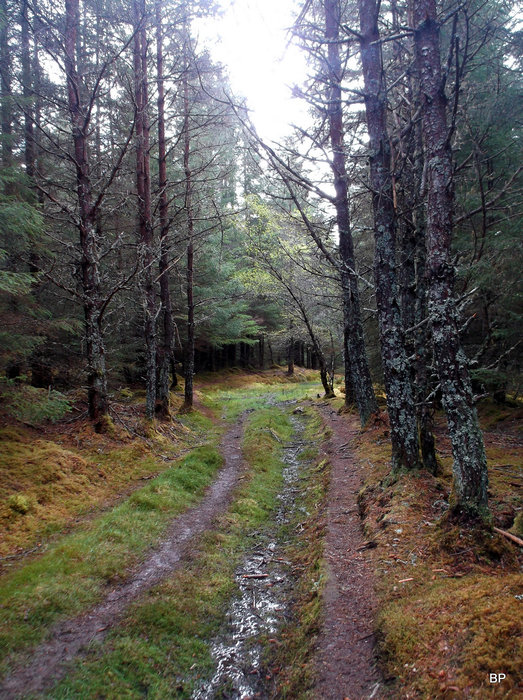 Up the track to Loch nam Bonnach, Torr Breac to the left: There is a lovely spot at the top of the high pass with nice views down to the loch: It had snowed the previous night and a surprising amount of snow fell on Ben Wyvis:

We decided to include Cnoc an Teine as it is the most interesting of all Beauly tops, the only one with a rocky crest and a steep section which makes you feel like real climbing, if only for a few minutes. And just as well we have access to "training ground" near home, otherwise I'd go completely bonkers. I think I'm losing it anyway... Kevin walking up the steep slope of Cnoc an Teine: Not much of a scramble but better than nothing... Keeps us mentally ready for more serious hillwalking (when it is allowed again!):

We spent a few minutes on the summit taking photos. Cnoc an Teine is a good vantage point in all directions including Loch nam Bonnach, Ben Wyvis, Affric Hills and the distant Fannichs and Beinn Dearg group. The loch in question:

Beinn Dearg and the Fairburn Windfarm:

From Cnoc an Teine, our route turned north-west towards Cnoc Dubh (377m). The traverse is over wet, bumpy terrain, but I was eager to give it a go: Luckily, when descending Cnoc an Teine we stumbled across an overgrown stalkers track which made things easier for us:

According to Kevin's GPS, this is the highest point. The Struy Corbett behind me. We noticed cloud gathered on the northern horizon and we knew we should expect a shower soon, so took the opportunity for some more snaps before weather was spoiled:

Cnoc Dubh is wedged between Loch nam Bonnach and Loch nan Eun, offering nice perspective to both bodies of water: On the northern end of the ridge I found a spot which seemed higher than what Kevin thought was the summit. Who cares anyway... This lumpy bump is not listed anywhere From Cnoc Dubh the natural line of traverse took us towards the second minor top, Torr a'Bhealaidch. This one has even less reascent and by the time we reached it, the forecast drizzle has arrived:

A large herd of deer watched us from the nearby high ground:

Looking back from Torr a'Bhealaidch to Cnoc Dubh and Cnoc an Teine:

The circuit can be prolonged by adding Cnoc Udais and (with more effort) Cnoc Croit na Maoile, but as it was raining now, we decided enough was enough, time to return to a beatenn track. Which was easier said than done!

We saw a surprising number of animal bones when exploring the Beauly tops. Kevin suggested it could be that the Beast of Bodmin Moor followed him all the way to Scotland. Well, rumour has it that the Bodmin beast was a runaway panther so who knows...
BTW I might be running wild on Beauly ridge but I'm not responsible for this: After some bog-hopping (nowhere near as bad as it might be in wet season) we picked the faint track leading to Loch nam Bonnach:

Instead of more tuft-jumping, we decided to follow the loch shore as water levels have dropped enough to make it possible to walk on the stony beach: The rain stopped for the time being and we enjoyed a lovely stroll along the edge of the loch, with superb views to Cnoc an Teine: We followed the shore until the edge of the forest, where we joined the track leading from Loch nam Bonnach back to Beauly. Now we met a few small groups of people (mostly families enjoying walking in the woods) so it felt like we were back to civilization again, after a couple of hours of lonely wandering over heathery lumps. Soon, another shower passed us and when we were back on tarmac road, we could see it drifting away towards Inverness:

This was the last variation of a number of routes that can be plotted in our neck of the woods. Beauly turned out to be a near perfect place to live in lockdown. We don't have any Munros or Corbetts to climb withing the 5 miles distance (who does, anyway???) but there are many interesting spots to visit and it kept us occupied throughout the tough times without breaking the rules. Well, technically, we walked away further away from the village than the recommended 5 miles but ... IMHO all this talking about "how far is within limits" is a waste of time. We should enjoy the hills responsibly, stay as local as we can and keep the social distancing. It's part of our new world now, the covid world and we need to adjust to live in it safely. Instead of drawing a line on the 5th, 10th or 12th mile and arguing about which is best

Nice one BP. It's good to see you've been making use of lockdown to do some local exploring!

) and then proceeded to tell us how rare red deer have become and dogs must be on leads at all times. I countered that I'd never seen as many red deer on the hills as I have in the past few years but he said this was wrong and dog must be on lead. This was Callie who never showed any interest in following deer scent and I knew I could trust her (unlike my previous dog Jack who dreamed constantly of venison steaks for dinner!). It kind of spoiled the walk and we've never been back.

dogplodder wrote:Nice one BP. It's good to see you've been making use of lockdown to do some local exploring!

) and then proceeded to tell us how rare red deer have become and dogs must be on leads at all times. I countered that I'd never seen as many red deer on the hills as I have in the past few years but he said this was wrong and dog must be on lead. This was Callie who never showed any interest in following deer scent and I knew I could trust her (unlike my previous dog Jack who dreamed constantly of venison steaks for dinner!). It kind of spoiled the walk and we've never been back.

I'm really sorry to hear about your encounter. We never had any problems walking in our neighbourhood. The local tracks and paths are very popular with dog walkers with dogs off leash running around happily... I guess you were just unlucky to meet a grumpy estate worker. Maybe he had something spoiled for breakfast

Honestly, we rarely saw so many deer as we did on Beauly hills. Every time when walking the moorland we counted several herds grazing happily about. Also, judging by the number of ticks we usually pick, deer must be thriving!

On the other hand, I'm voting with old Jack - venison steaks for dinner