My first introduction to Ben Klibreck, around 12 years ago. The description and route are from memory - I'm sure about the start and finish but less sure about where we left the ridge.

It was a dry day but started cloudy. On the way we stopped to photograph Loch Loyal and my brother commented to another tourist that he was hoping for the weather to warm up.
He replied something like, "Yes, but not too much. Otherwise it'll be Greece, not Scotland."
Wise words. 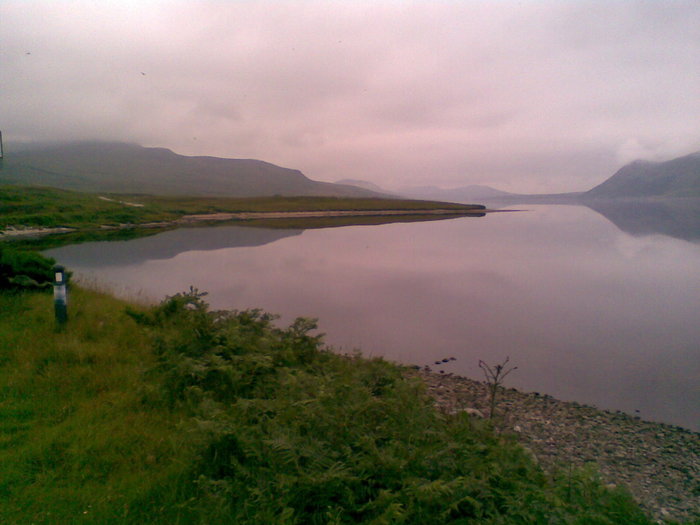 We parked somewhere north of the Crask Inn and set off along a bulldozed track, becoming acquainted with the local wildlife on the way. One of the more benign inhabitants

Most of said wildlife consisted of midges, cloud upon cloud of them, and when they found that some areas of my skin were covered in cloth, they called in the cavalry in the form of clegs. Or keds. Or small, fast vampires.

Eventually we started up the first slope and the insects started to thin out. The clouds were also clearing by now.

It took a while to get rid of them entirely. The top was mercifully clear, and there weren't many clouds either. NW, and a distant outline of Hope

I understand the trig point was damaged some time later. I didn't get a picture of the whole thing, but here's a moth on one side... This was on the way down, the fireplace and part of the chimney still intact. ...and on to Bealach Easach. Looking back from Bealach Easach Back along the track

The sun was going down and there was a dense cloud of midges centred around a group of Highland cattle. We gave them a wide berth to avoid the worst of the midges. Looking back at my first Munro

We hit the road just south of the Inn.
Route is approximate.