It was a brutal cycle into the wind from the centre of Glasgow up to Carrot. Last time we had left the bikes here and continued on foot - however, now I had my shiny new bike that could cope with the gravel tracks so we were able to take the windfarm track (a sightly longer way around but worth it to stay on the wheels!)

We were also now more sheltered and side on to the wind! 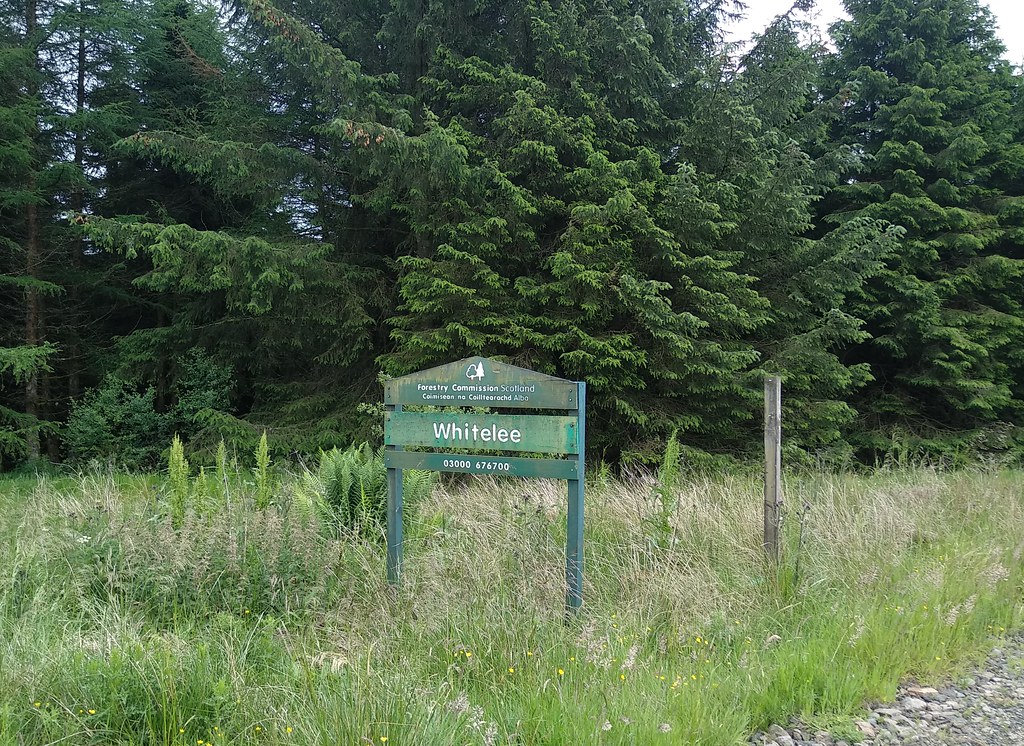 Possibly this is the most emotion Malky has ever shown 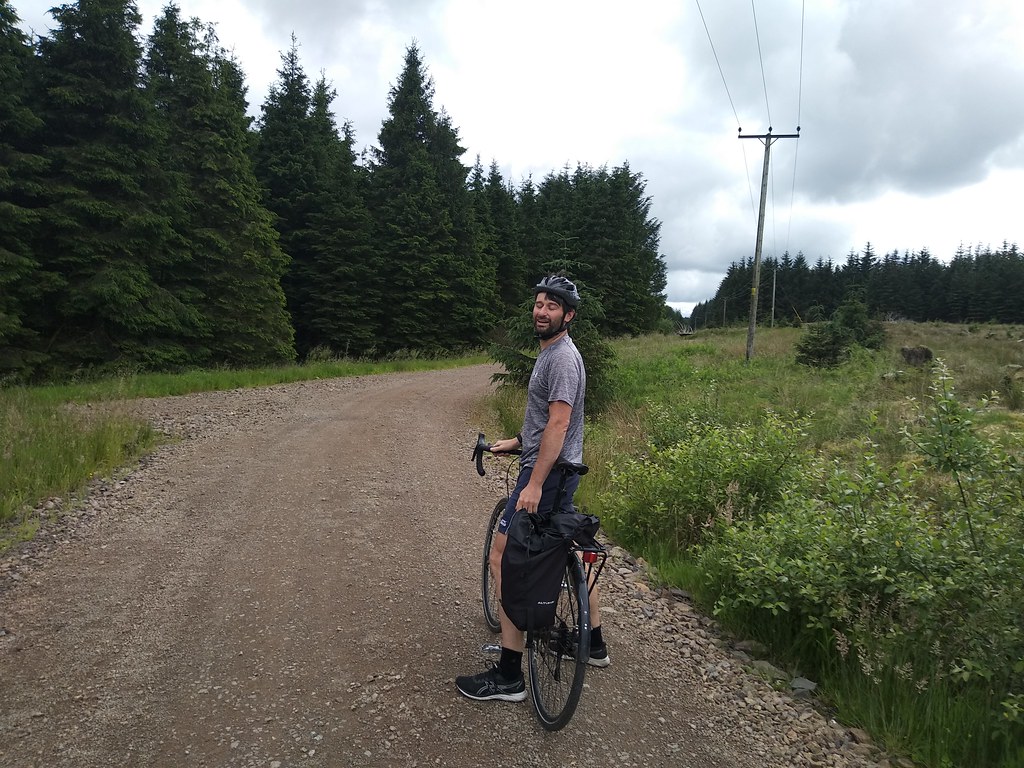 Despite the grey skies above, so far we had only experienced a few spots of rain. The forecast suggested this would be the story until 7pm but we weren't sure how much we trusted it!

The surface of the track seemed to have been improved since we were here around a year ago - we both remembered larger stones and ruts, but it was mostly a realtively smooth, fine gravel now 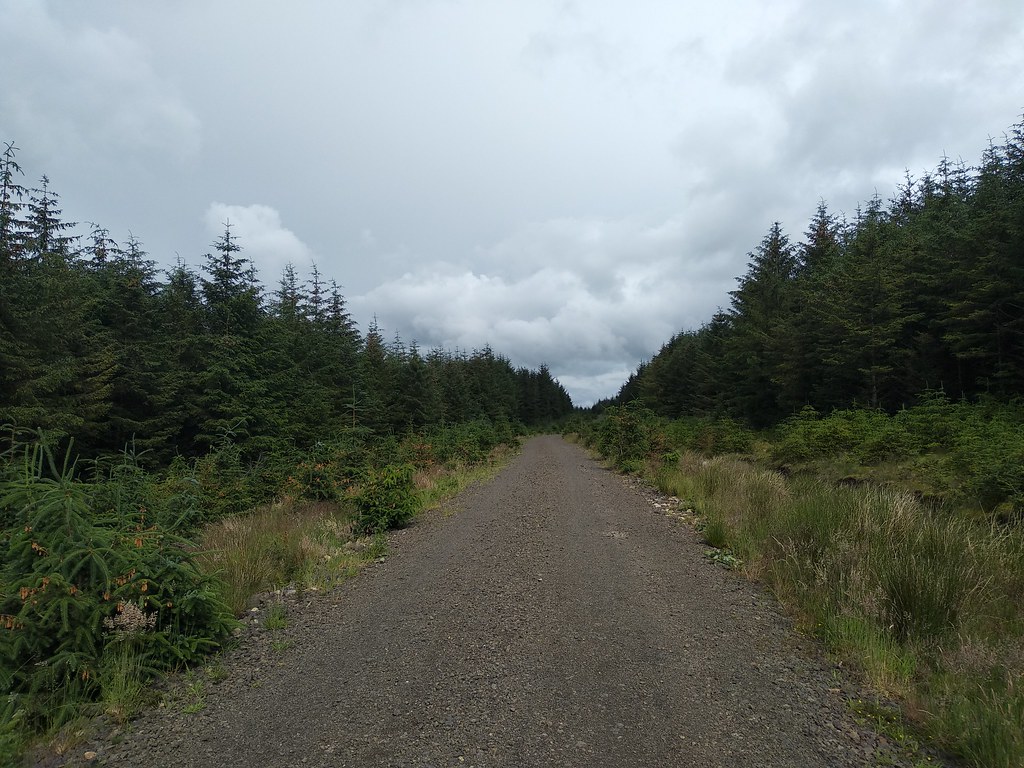 We spotted the path we had come through before - now we were on the same route and we managed to remember where we were going (although we snapped this for later - the OS map isn't quite up to date, and although google satellite was useful it seemed a good idea to have an up-to-date version 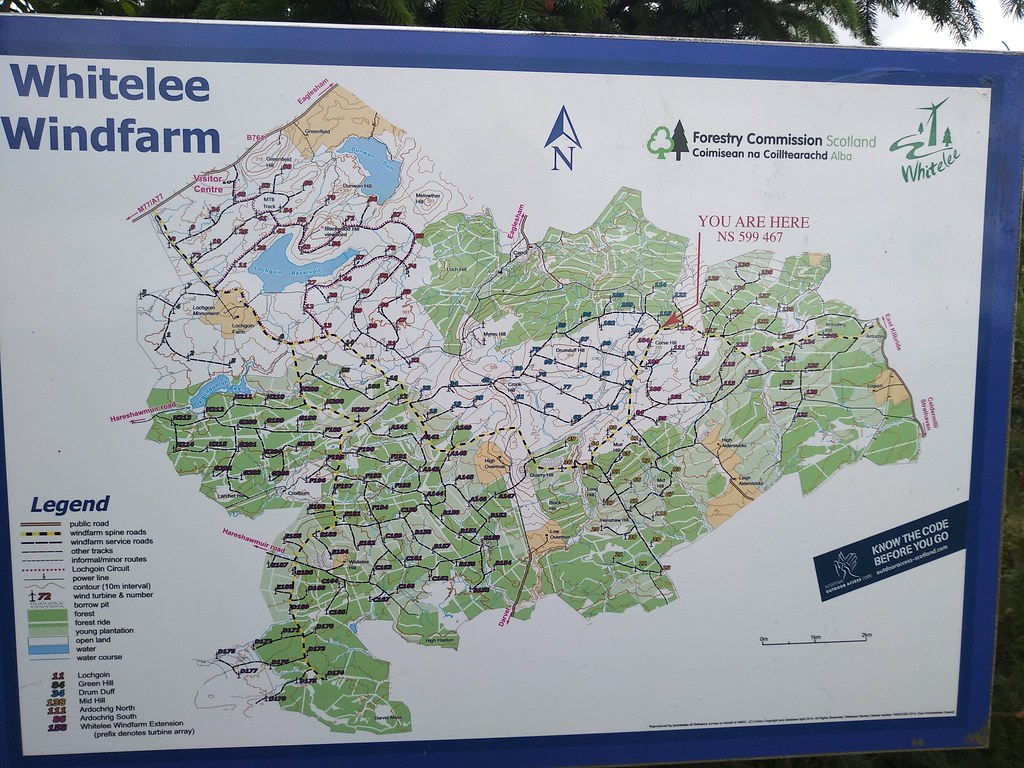 There were a few steep sections but most of the ascent had been done on the roads, and before long we were at the summit of Corse Hill 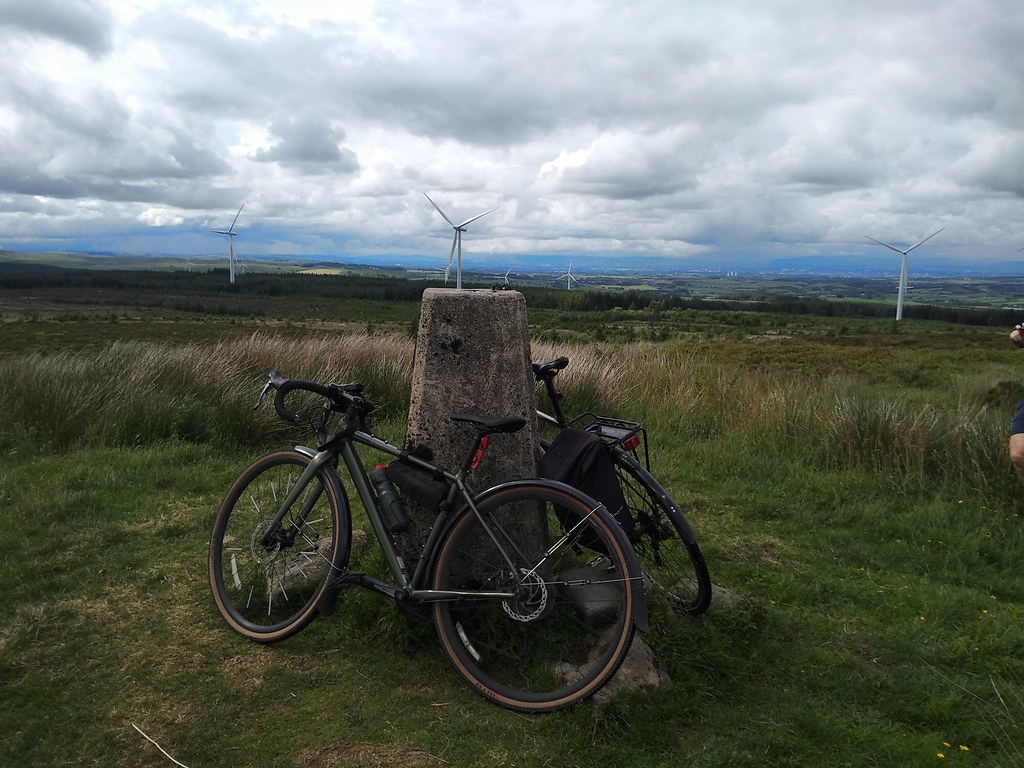 Although a bit overcast we could see out to Dumgoyne, which despite being only just over 400m high had been in the cloud during the cycle up (although the camera on my phone largely fails to pick it up anyway!) 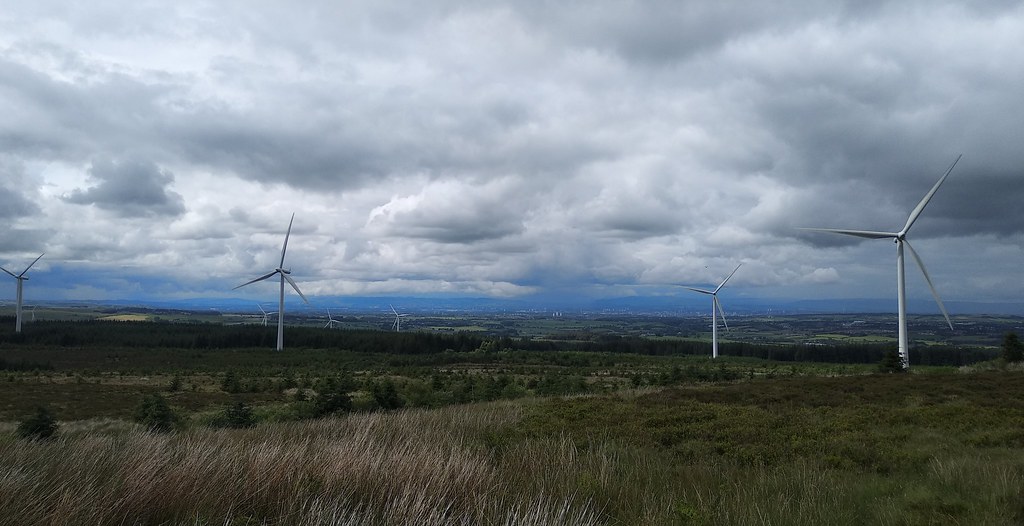 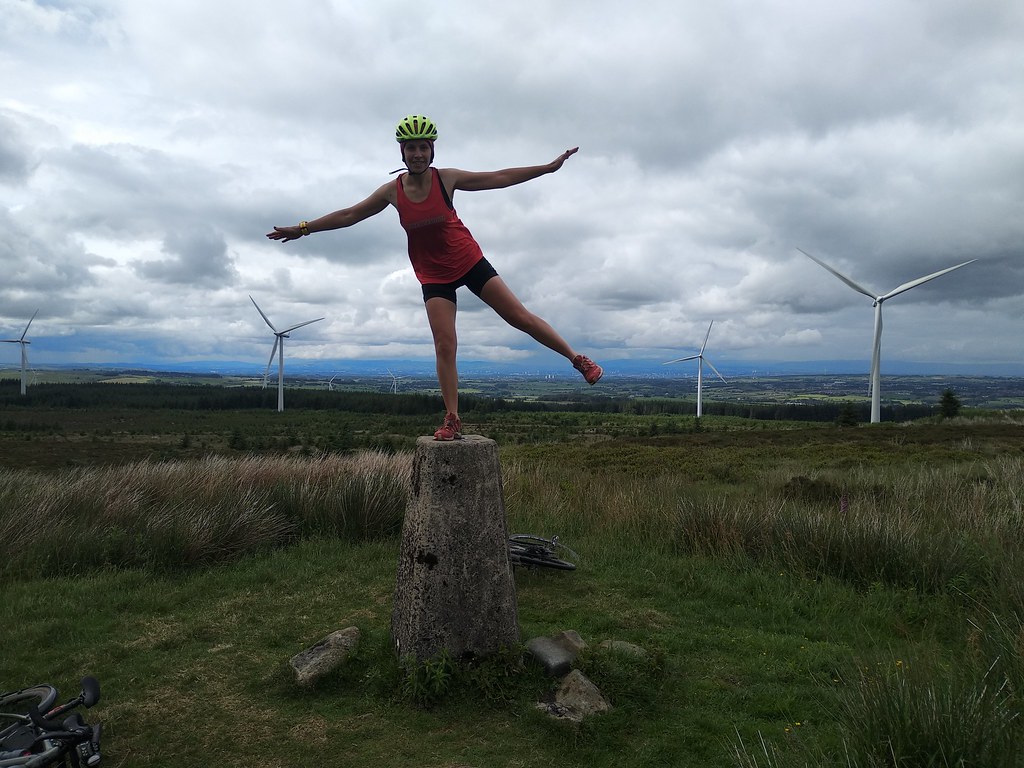 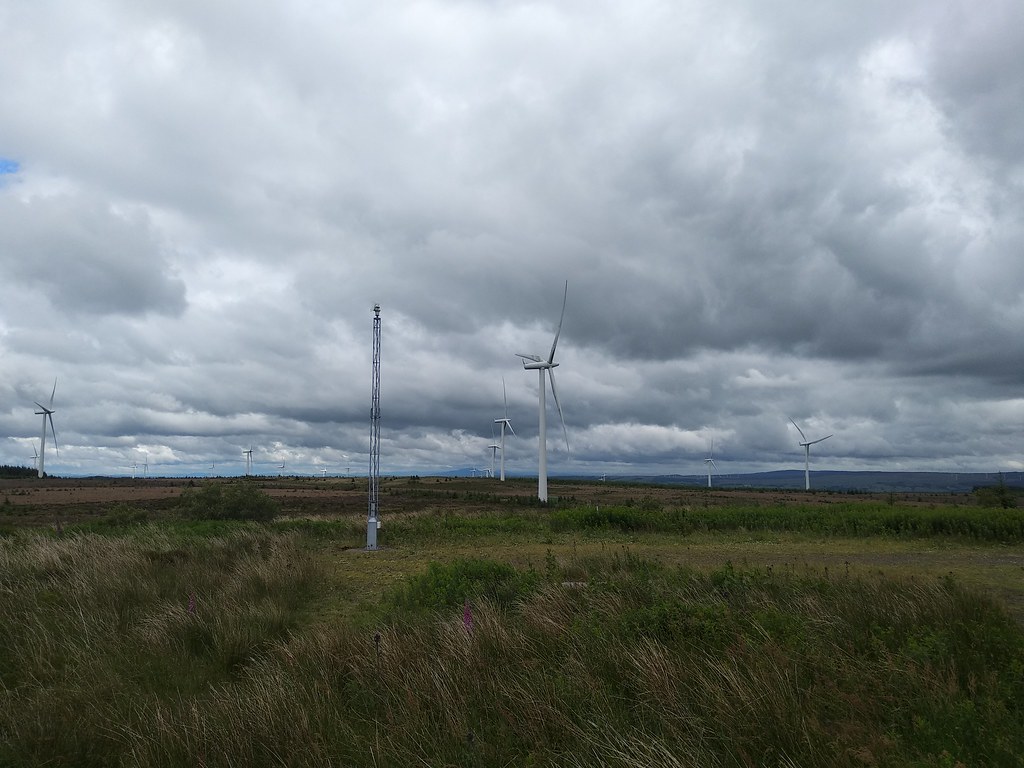 Looking out to sea - looks wet but also very pretty 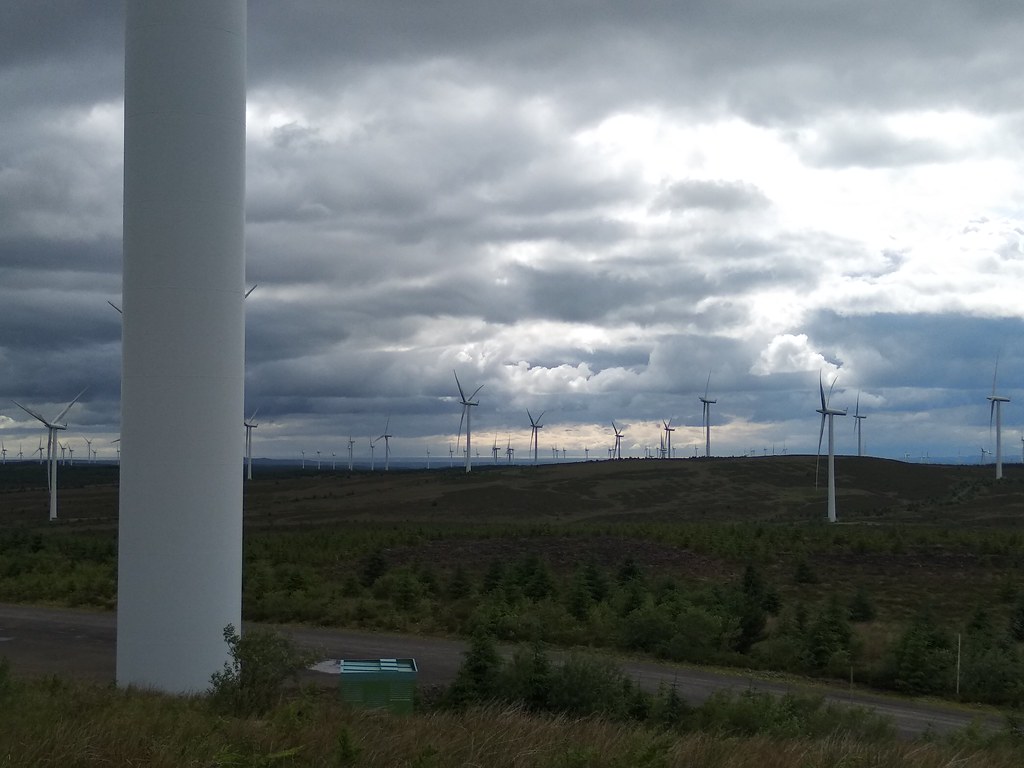 Malky's defence for the weird face is that he is eating (as usual!) 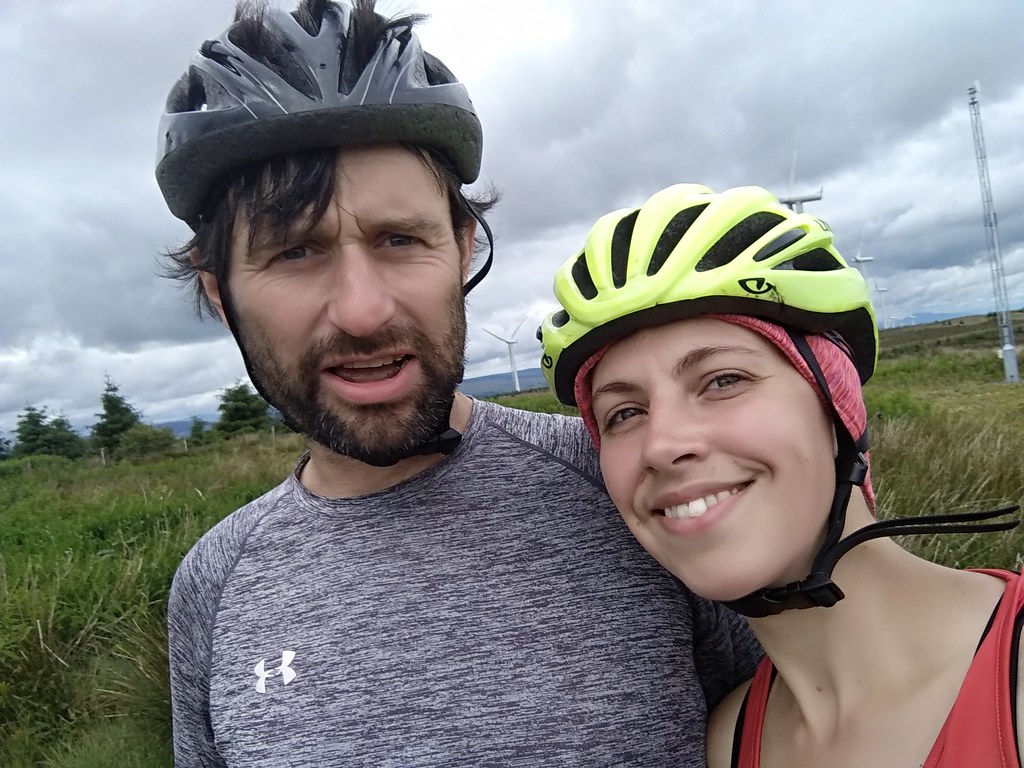 It was a bit chilly for standing around, and we also wanted to at least have the wind behind us on the home straight before the rain came in, so we decided to get going.

This time around we were able to continue through the Windfarm, keeping to the Spine Road (the other tracks looks interesting and could be explored on another occasion, but we weren't really too keen to get lost and soaked today

) However, for now the sun was out, the wind was low and the surface wasn't doing my backside too much damage just yet 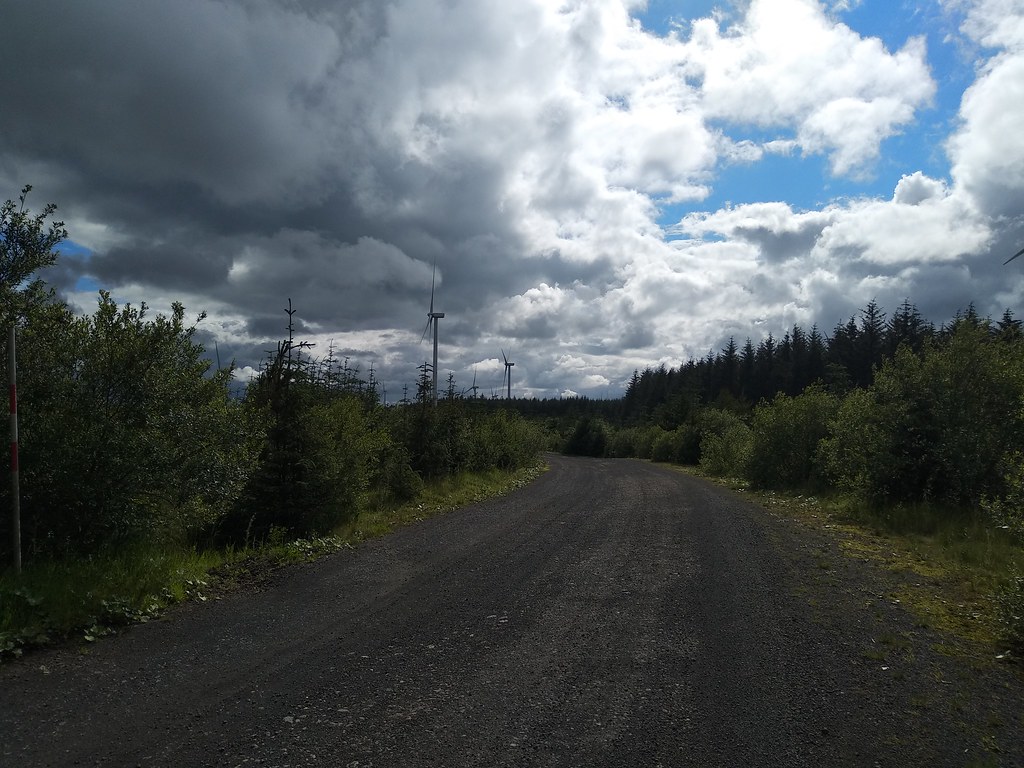 The Spine Road was probably a longer way around, but it was interesting to see how many different estates the Windfarm was built on, and they were all carefully colour-coded on the signs. I thought this was cute, but Malky who has worked on sites pointed out that it was a rabbit-warren so was actually for more practical purposes 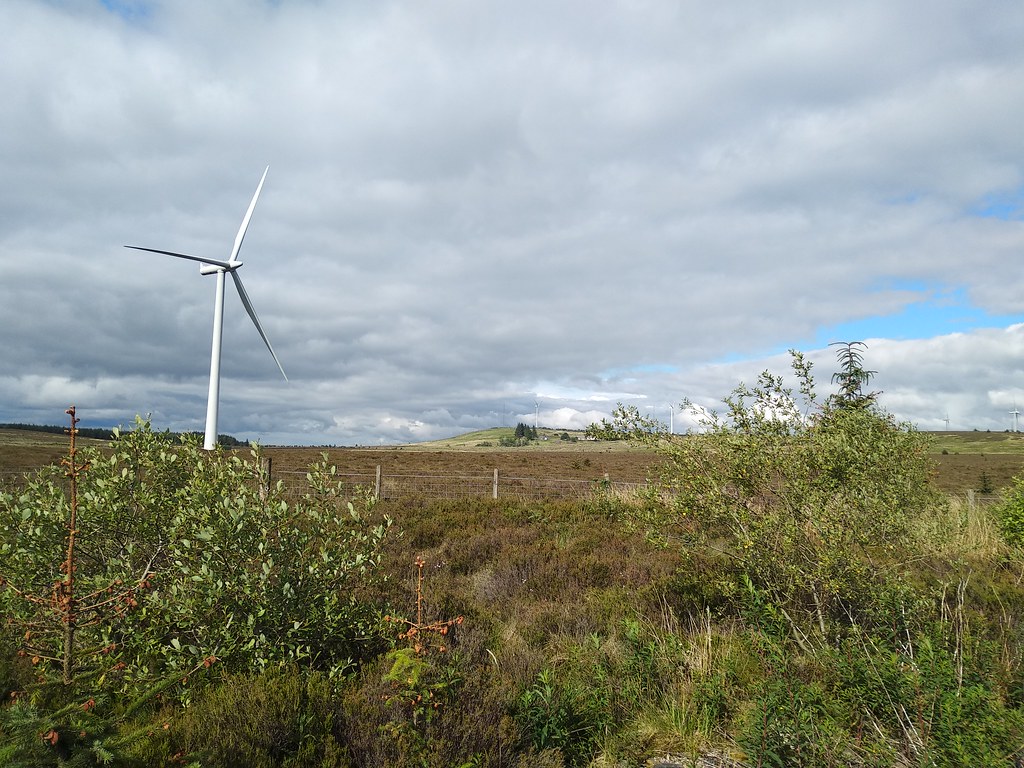 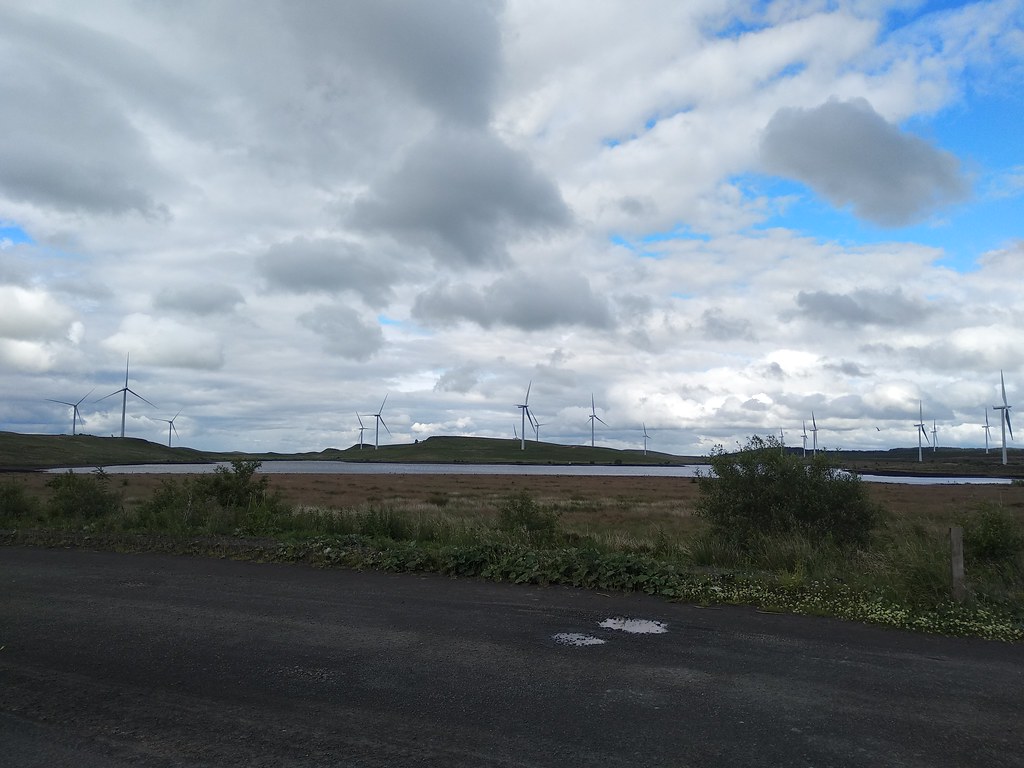 Sun on the steel trees 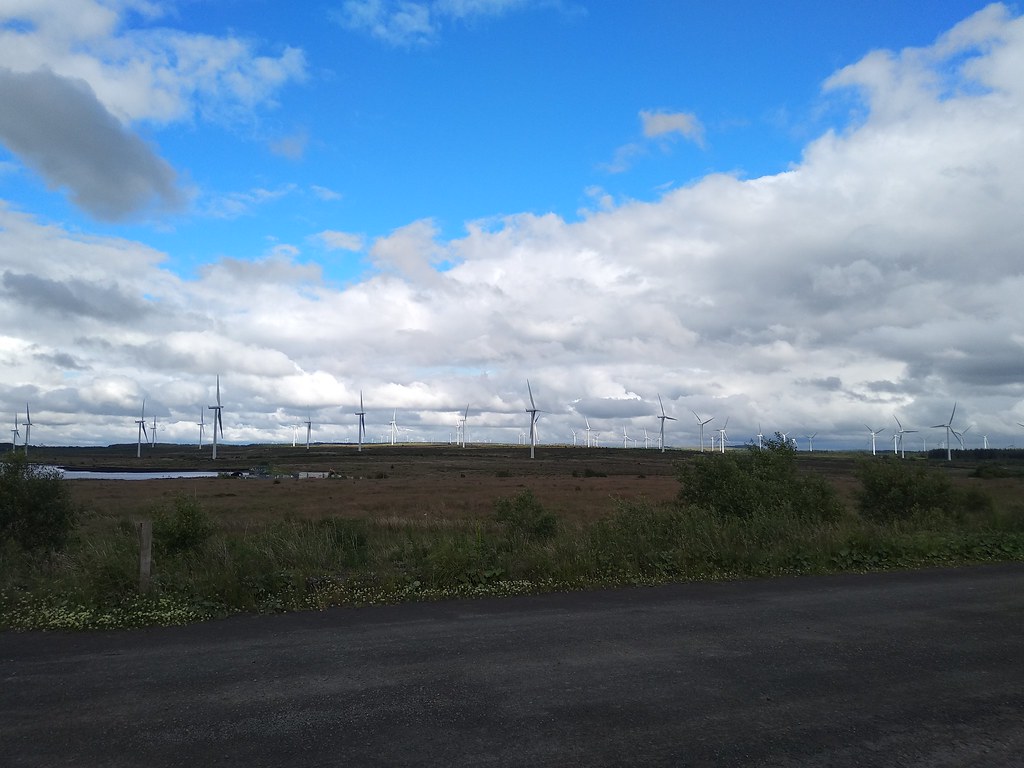 Here we joined a tarmac road (ahhh bliss!) which took us to the main road across the moor, familiar to both of us. We had a few more metres of lovely tarmac before crossing into East Ayrshire where the road surface deteriorated to far worse than the track

Fortunately we turned off very shortly, and not only had the wind behind us but also more lovely smooth tarmac 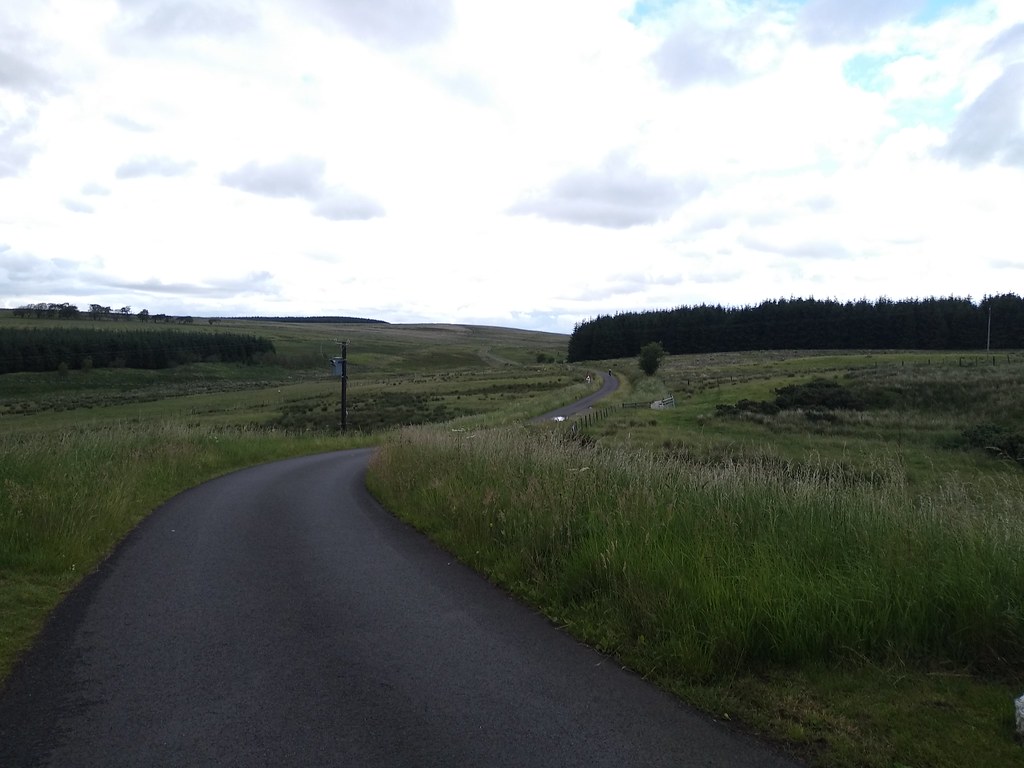 From here it was a relatively easy smash home. The rain did catch up with us and we had to don jackets to avoid a 20 minute shower, but at least it was coming from behind us!! 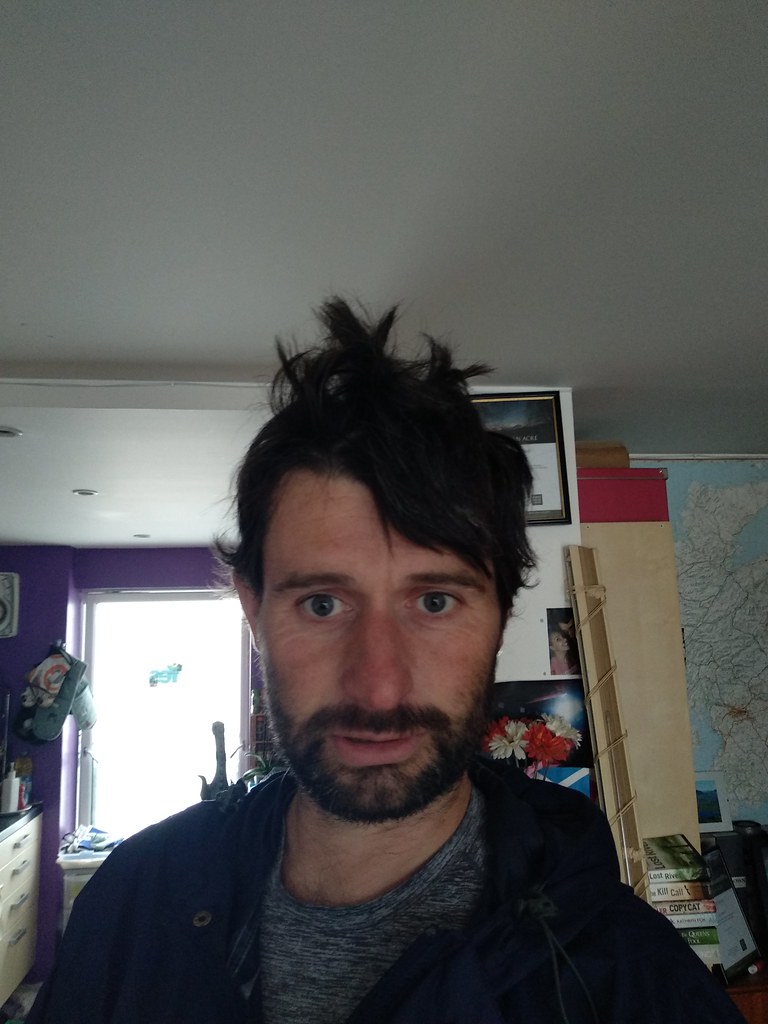 activity_5154040027.gpx Open full screen  NB: Walkhighlands is not responsible for the accuracy of gpx files in users posts

Steep climb that one 🤣

PeteR wrote:Steep climb that one 🤣

Definitely a toughie - that climb onto the trig

Its amazing to see how well the steel trees seem to self-pollinate. A whole new version of the Caledonian Forest!