This report includes two different walks, but as the approach is similar, I thought it would be best to add them together

Having lived in Largs for the past 25 years, walking over the hills from to Kilbirnie or Lochwinnoch had never crossed my mind until a few weeks ago I met a group of men during a local walk, who told me (rather knackered looking) that they walked from Kilbirnie/Lochwinnoch.
Back home I instantly checked out the route they might have taken and having done a rough calculation the distance from Largs to Kilbirnie over the hills (15km) seemed not too bad. I had walked up and down the local hills nearly daily during lock down and a new route was just what I needed. All what I needed now was a good weekend, of which we luckily had plenty. With my gear packed I set off on a sunny Sunday and followed the new track which connects Largs with the Haylie Brae. The path was build to support the new forest plantation and Hydro dam. There are mixed opinions about the path, but they have one advantage and that is to create an easy way to venture deeper into the hills. Back in the days before the path was build, it would have taken me at least 30-45min longer than I did now. 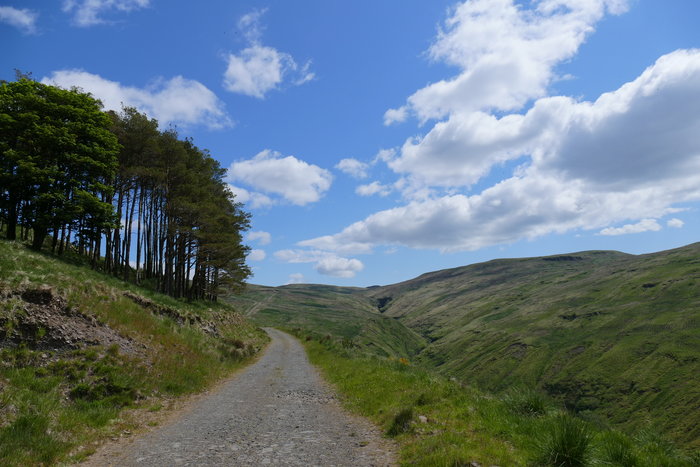 My local and stat of the walk 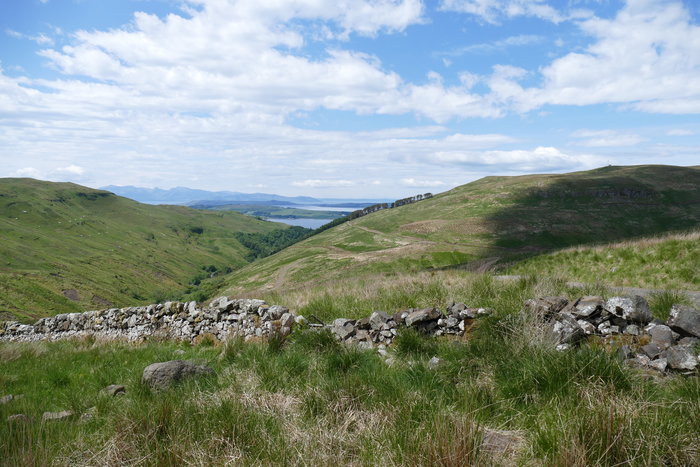 Higher up the path looking back

I reached the high point below Patons Hill from which I left the path and made my way across the moor to climb Irish Law. Between Irish Law a crashed plane from the 50s can still be visited and a proper cairn greets those who make it to the top. From Irish Law I usually returned home, so looking towards the moor I felt excited to venture further. Myself on Irish Law

My next target was Black Law in the distance. The distance between Black Law and Irish Law is only 1.5km, but its bog at its finest. A layer of soft spongy ground covered by knee deep heather. Walking through that is arduous, similar to deep snow and without any kind of path in site crossing it quickly was wishful thinking. I was glad when I finally reached the sloped of Black Law where grasses took over. The cairn of Black Law is one of the most impressive cairn I have seen on such a small hill. It beats most Munros and the big Scottish Flag flying high was quite a site even from a distance. The views seemed endless to all directions. 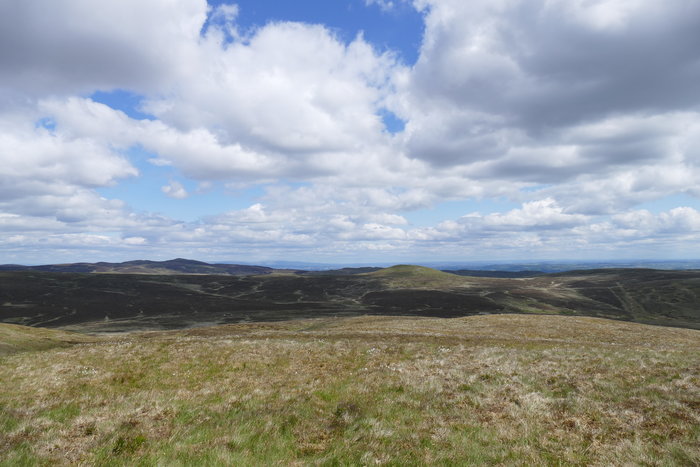 The walk towards Kilbirnie

Getting my bearings, I spotted the new hydro path which connected Kilbirnie with the start of River Garnock. It was an easy down hill walk from here and back on the path walking started to get easier again. Making my way down the valley my next target was Glengarnoch Castle. Build in the 15th century by the Cunningham Clan I had only recently heard about it and a visit seemed a must. From the path to the castle ruins its a walk through some fields with sheep and cows and crossing of the River Garnock. Only a young couple were present when I arrived having a quick wander around the castle I took some photos before continuing down to Kilbirnie . The track towards Kilbirnie looking back Two weeks had passed since my walk to Kilbirnie and the option to walk further to Lochwinnoch had played in my head. Having drawn the route online, I was surprised to see that the distance in Kilometers was only 1.5km longer than the previous walk . Not wanting a repeat, I thought that doing the walk from Lochwinnoch to Largs might be a better option and from a drop of point it certainly is.

Driving up the long single track road I was in new territory , which when it is close to home is always a surprise. The end of the road was a drive way to a house, but next to the house I could see a gate which I guessed was the start of the path. Having said good bye to Kevin I walked towards the driveway of the house and I felt a bit intruding walking so close to a property. I hoped I was the right way, but when climbing over the gate I noticed a small sign asking asked people to wear gloved when crossing, at least I was on track. Looking back towards the house The path was faint at the start and I had to check my GPS to make sure that I was indeed on the right way. Confirmed I walked on and further up the fields the path became more prominent and assuring. The track lead through some lovely countryside and even with the hazy weather the views were lovely. In the very far distance I was able to see the outskirts of Glasgow and the large lochs of Lochwinnoch lay behind me. Rolling hills spread ahead of me and I had a guessing game which hill Misty Law would be. 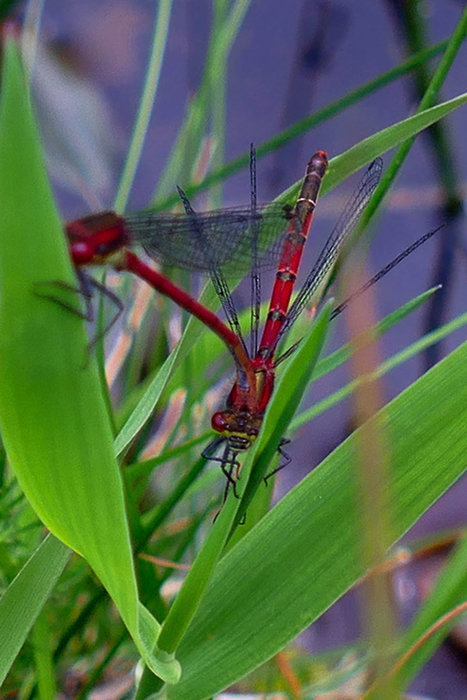 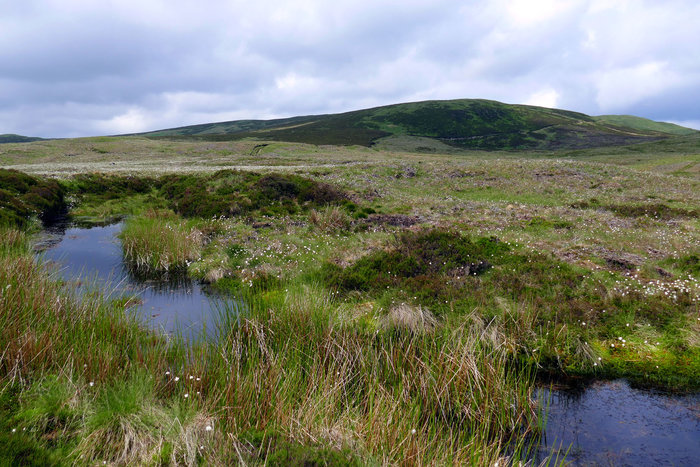 The coast was a long way off which brought the distance I had to cover into perspective. It was a murky day and the fact that I forgot my insect repellent made me into a walking snack van for the local clegs and midges. I was desperate to gain height, but the path was a gentle slope up, so I had to endure the content buzz around me.
Climbing higher the views extended even further and bog cotton soon spread in all directions. I stopped frequently to take photos and enjoyed exploring again. Staying local for 3 months had been tough! 1.45min after setting off I reached the top of Misty Law, a truly spectacular view point towards Arran, Glasgow, Lochwinnoch and Greenock. On a less hazy day, the views must be amazing and I already made a mental note to return at some point.

View from Misty Law towards Glasgow The walk ahead...the tallest hill on the horizon is Irish Law

At the small cairn and looking around I had to find my bearings in the bleak countryside which spread out for miles and miles. In the distance I spotted Irish Law and Black Law which seemed even further away then the map told me and and across the endless moor the walk ahead looked rather daunting. I had hoped to find at least a faint path, but for the first time in a long time I was not even able to track some animal paths. Making my way down the hill, i was soon on spongy ground and knee deep heather. Anyone who had ever walked through ground like this, will know how arduous it is (think about doing high leg rises in the gym for a few hours) Plodding along I could see the start of the River Garnock and the building works to complete the damn. Not very pretty, so I choose to keep higher up the hill to avoid the construction vehicles. I wasn't able to enjoy the view much, as the ground required complete concentration. The good thing about walking with your head down...spotting a ladybird (on sheep poo) Looking back towards Misty Law

Having spotted a wee loch, my idea to get closer to take some pictures, turned out the wrong one. Up here a wee lochan is covered by ankle deep water and once you are in it, it seems to spread around you with no way out. Cursing I tried to reach higher ground, without getting wet socks, but failed. Making a mental note to keep away from all wee lochans I reached the wee burn and climbed up the other side, following the general direction towards Black Law in the distance. Since I had climbed Black Law I wanted to avoid any hills during this walk and stuck pretty much to the route I had planned out.Having mastered the first 4 km I was getting tired and craved some less arduous ground to walk on. Having passed Black Law, I decided to take a break at the shoulder of little Irish Law. In the distance the wreck of the small plane that had crashed in the 50s was in clear view. The passengers had been lucky, as they survived and were able to walk to safety. It's not surprising to see why the wreck had never been recovered, as the task would have been quite difficult. With the cairn of Irish Law in site, I took a long break. Laying down I watched the wee birds catching insects and the bog cotton grass swaying lazily in the small breeze. 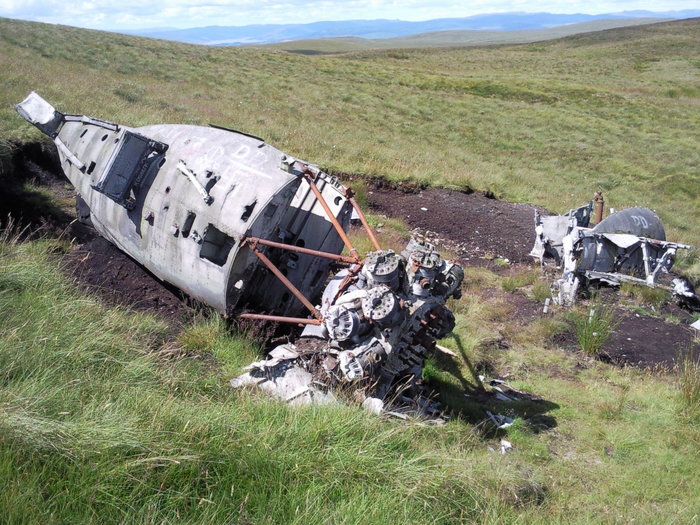 Packing up I set off again and climbed down the grassy slopes. From little Irish Law the heather had given away to long grass which was slightly easier to walk on, crossing over to now familiar territory I reached the path at the bottom of Rigging hill after a 6.5 km cross country excursion. In comparison the remaining 5 km were so easy and brought me back to Largs 5:45 after setting off. 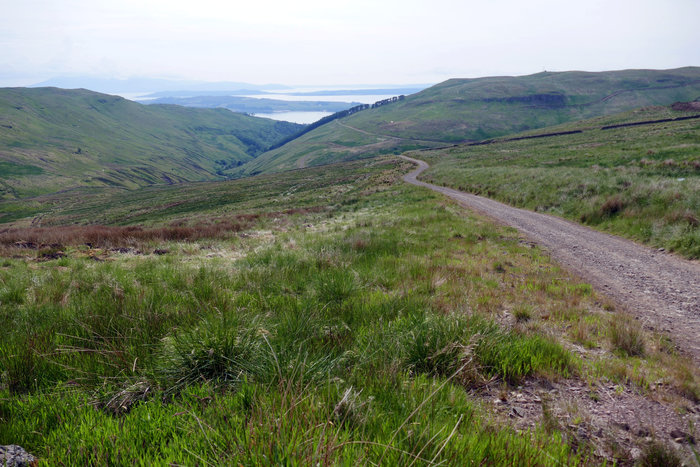 Back on track on the way home

Really interesting.... I've been repeating Blaeloch Hill recently and had extended to Hill of Stake as well, once from the starting point of your second walk ( the single track road to the Muirshiel Country Park is even longer from Lochwinnoch....)

I was writing up my 4 trips into a report last night when my PC crashed, so will have to start all over again.....that countryside looks very bleak and remote in the mist, as my report will definitely show

Didn't realise there was plane wreckage where you were...... I'll have to investigate that one day.

It's great to discover another side to your local area, which I think quite a few of us have during the lockdown. It's certainly made me appreciate the possibilities of walking in North Ayrshire far more than I had.