Risk assessment completed we set off. I'd identified some TUmps on our list beside Aboyne which would probably be quiet.
I collected Harvey from Harvesthill and met GordonC just outside Kinker ( Kincardine o Neil ).

Turned off down the horse sanctuary road and parked our cars on a verge at the crossroads. We could've gone down to the sanctuary, but I didn't want to get H mixed up with any livestock, so chose this circuitous route which turned out to be facilitated by strategic-ly placed gates and a nicely mown edge to the field where some sheep were grazing in the deep grass which meant they couldn't see H. GordonB & H negotiating the locked gate at the start of Drumgesk Hill.

Walked up to the Phone mast past an old Microwave mast which was lying in the corner of the field awaiting disposal.
The top was on the other side of the BW fence, so GordonC and I hopped over in turn to stand on the overgrown pile o stanes. Drove across the main A83 to the road up to Bonnyside. A notice by the estate prohibiting unauthorised vehicles stymied my plan to drive up the track a bit further, so we parked up on a convenient flat area at the junction just beyond the road to the old Poor Houses. ( The folk living in them now weren't very poor, judging by the quality of cars driving in and out ! )
I'd spotted a path going up Little Hill on GE, but when we came to it, I spurned, as I thought the path was further on. Eventually we came to a firebreak in the trees allowing a distribution power line a pathway. We started up a track over a broken-down style which ended after about 20m. We took to the wood, as the summer growth was filling the firebreak. At the top of the wood we encountered windblown trees, so re-entered the firebreak and braved the chest-deep bracken. GordonB negotiating the bracken at the bottom of Little Hill

We crossed on to the flank of Little Hill and followed animal tracks untill we came across a path. leading to the top.
The first top looked the highest point, but GordonC spotted a cairn further on. In time-honoured fashion, the first look higher from the second and vice versa. However we didn't care as the sun was shining with no wind ! 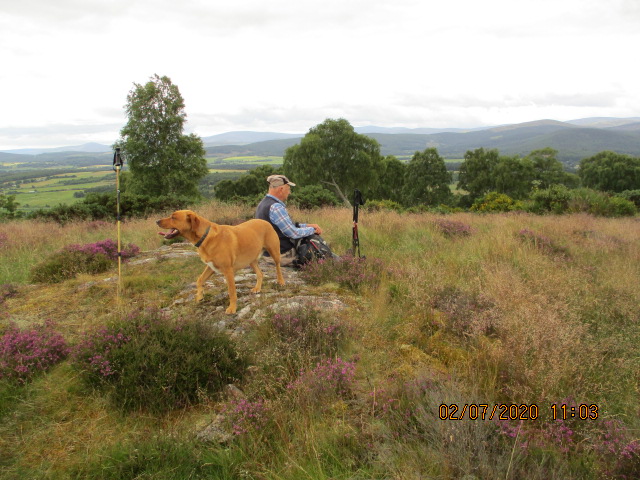 The first top of Little Hill

We set off down to the unoccupied cottage, apparently used as a summer let.
Behind it we could see a verdandt green expanse of bracken, so we walked along the track to Tillybreen where we thought we could see a path up through the bracken.
Tillybreen was deserted apart from a couple of abandoned Land Rovers and a flock o doos occupying the barns.
As it turned out, cattle had grazed the area previously before the bracken had grown, so it made it relatively easy underfoot, although the bracken was still chest high. Eventually we picked up the fence running to the top and crossed over at a junction to gain access to the fort. There was a club plaque on the top and a horizontal tombstone-like memorial slab in memory of one of the Marquis’s of Huntly, erected by his wife and "the tennantry".
GordonC found it quite adequate for having his piece on, while I socially distanced at the cairn. 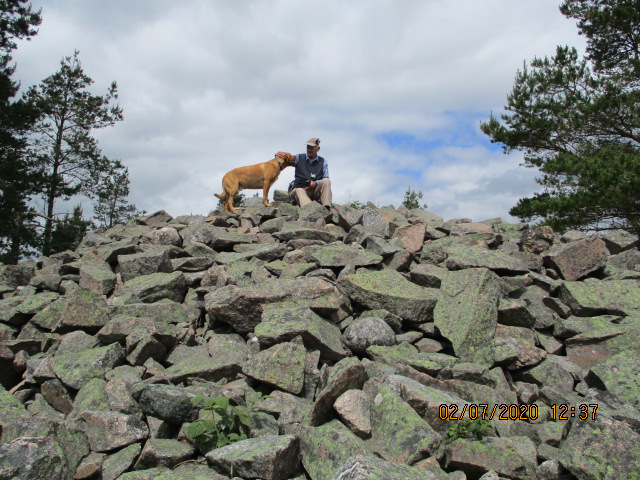 We languished on the top soaking in the views over the trees until the flies descended on us in such numbers that we adopted the Aussie wave. We had to descend - so quick that GordonC forgot his walking pole and had return to the top to retrieve it, as H and I blundered down through a veritable bracken-fest to the cottage. GordonC remarked that if we'd fallen in the bracken, we wouldn't ‘ve been found until spring ! The path home from Mortlich

However, we made it back to the car without any dramas.
We rewarded ourselves with an ice lolly in Aboyne, which we decontaminated before eating, whilst being harassed by a Blackheaded gull, who wondered where all the tourist were - then drove home.
I think the bracken - bashing was easier for H as he didn't have to cope with the fronds higher up.
Quite a strenuous day in the bracken jungle........for such wee hills, and a day of threes - 3 tops on Little Hill, Three ascents of Mortlich by GordonC and three TUmps.