g47.gpx Open full screen  NB: Walkhighlands is not responsible for the accuracy of gpx files in users posts
The weather forecast was a bit better for today, in fact the Met Office were rather poetic with their 'new coating of snow against the milky blue sky'. It wasn't quite like that here though, but good enough! I decided on the Corbett Sgurr Mhic Bharraich, not too committing if the weather turned real bad and a nice path from the north hopefully keeping out of the worst of the wind.

I followed the WH route from the Shiel Bridge campsite, just a few minutes in where the description advises to keep to the old path I turned to the right too early and ended up walking just above the river, into the little gorge. There is an enjoyable path of sorts here (it would be great in summer) but low branches were snagging the sack and threatening to push me into the river so I headed back up to the proper route. The path is great, fast progress and views opening up quickly - ahead the Saddle and western tops make a fine looking ridge. I was tempted to go for that instead but stopped myself by a reminder that I need some more breaking in. 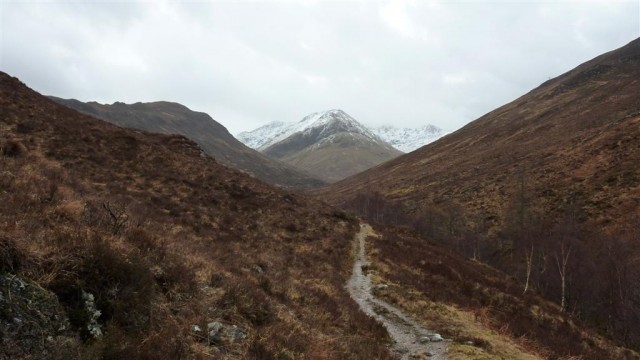 The path starts to ascend and heads to the west around a spur of the Sgurr giving a better view of the Saddle and west ridge. Here the rain started so on with the waterproofs, just a shower for 15 minutes though. Where a stream crosses the path and turns left, I headed up the grassy slope to the NW. This is reasonably steep and leads to a small plateau where the way ahead can be chosen, I decided upon the easier option near the stream to the left of the crag. I stopped to take a photo of snow being blown about on the ridge to the south, I was completely sheltered though. I stopped for a while for food and drink, always a pleasure in these surroundings. Finally the summit area is reached, views are tremendous even with the weather and light as it was. The wind was strong here of course, but not too bad. I had an enjoyable minute just leaning into it. along Glen Shiel - not much snow The summit area is a plateau, I headed to the cairn. summit plateau, cairn on the right

From here more views open up. The section of the plateau beyond the cairn was great. I had a brilliant time exploring all of it (being careful not to do too much descending!), clambering over rocks and finding snow pockets to go up and down. It's a watery place but all ice now. When I'd finally had my fill, I headed just to the north of the cairn to take a look at the descent to the east. A good amount of snow had been blown here so it had to be this way! I followed the ridge to the north for a bit, then angled down to the east near the stream (stopping again for more food on the way). The snow was soft, ideal for planting the heel to create steps so I made the most of it. The descent following was fast and uneventful, if just a bit squelchy lower down, and I reached the path just before it crosses the river. For those who are really fit, an ascent could easily be made up the east ridge. looking back at the descent

A grand day out. Only thing is, despite all the snow over the previous 48 hours there's not much left as you can see. It's been blown away or melted, I was surprised there's so little.

Great report & some stunning photo's from the top, thanks for sharing

Good report and pics there, good to see you back up this way ,look forward to more reports