The Tale of Cinderella and The Not So Ugly Sisters

The Tale of Cinderella and The Not So Ugly Sisters


Coming off the back of 102 days of travel restrictions and lockdown, I decided it was time to brush off the boots and get hiking. The brushing was more difficult than you would expect due to a mistake I had made back in March. A rather unsuccessful wild camping trip to Loch Doon, which was abandoned after hours of being drenched and chilled to the bone, culminated in the boots being left in a friend’s car. Cue lockdown, and a very smelly pair of hiking boots, at least they had dried off by the time I got them back. This would be my first solo hike, the first hike of the year, and the first using some new equipment, a rucksack, smart watch, and unfortunately waterproofs.

A fair deal of planning went into the day, more than I think my employers would be happy with. I printed my OS maps, loaded the route onto my watch, and checked the weather forecast roll on Carn Gorm, Meall Garbh, Carn Mairg and Creag Mhor. All set for my first hike in exactly a year, the weather forecast scarpered my plans. The days of incessant checking of the met office and MWIS websites forced a last-minute change with the visibility looking poor on the afternoon of the 4th of July. This was not the way I had imagined the break-out from lockdown would happen, with crystal clear blue skies, a faint breeze to keep me cool, and no feelings of muscle aches and pains (one can always dream). Unperturbed, I re-planned thinking of a location where my rusty navigation skills (a year felt like an age) would not be a problem in bad visibility, and that I could access from Dundee in a relatively short amount of time. And so, the Cairnwell Munros appeared to be the perfect opportunity, an hour drive from Dundee, with well-marked, some would say ugly, landmarks and a good chance at bagging three Munros in a short outing. Planning finished the day before, I felt like a young child on Christmas eve, sleeping was going to be difficult, but at least this time I knew the presents would still arrive even if I did not manage a wink.

To the day, the 4th of July. I decided an early start was needed to get the best of the weather and so I set off from Dundee at 6.15am basking in sunshine, a slight breeze, and feeling somewhat fresh despite my broken sleep, could this be the perfect day I dreamed of? The drive was quiet and easy, I even managed to spot a few locations to buy strawberries on the way home, and, despite some clouds rolling in, the weather seemed to be perfect. I arrived in the ski centre car park at 7.15am, tied up my boots as quickly as I could, grabbed my rucksack and I was off.

Walking past the deserted Glenshee ski centre, I noticed a new set of inhabitants with a bit of an itch. Rounding the ski centre I was hit by the first obstacle a steep slope up to the café building and the main ski-lift to Carn Aosda. My burning quadriceps told me lockdown had been too long and too inactive. Despite the longing that it was winter, and the ski-lift was in operation I continued through the fences that line the ski-slope and up the track towards the summit. The next obstacle was the steep climb up the hill to the well photographed Carn Aosda signpost. Contemplating the next 15 minutes of burning muscles (so much for no aches and pains) I spotted another early riser already making their way to the top, “must be a local” I muttered to myself as I started the climb.

I made it to the top of the slope, approximately 20 minutes after leaving the car. This left only a short climb to the summit although I was feeling much like, the now bent, Carn Aosda signpost. 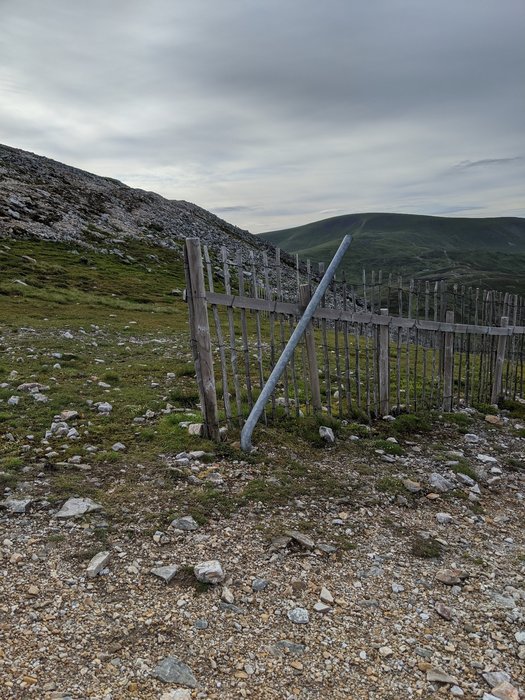 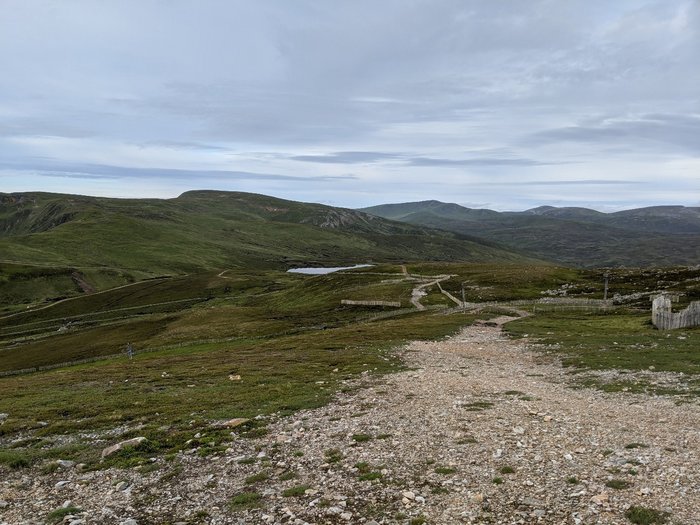 A perfect opportunity at the crossroads of the track then for a socially distanced, and sweaty on my part, chat with the other climber who had just descended the summit. Not a local, but an even earlier riser who had driven from the Falkirk area, like me disturbed in their sleep by the excitement of the hills. Leaving him to continue his day, knowing likely that we would chat again later, I continued my ascent making it to the cairn after only 30 minutes of walking. Having read many a report delve into the detail of the scarring imposed by the ski infrastructure, I was in for a huge shock. What a view, a brilliant way to tick off the first Munro of the year with a panorama of the glen below to the north-east, The Cairnwell to the south, and the rest of the walk to the south-west. 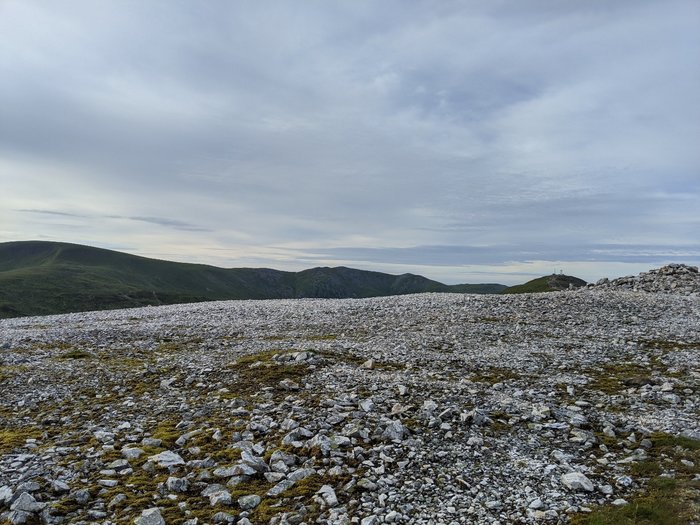 Knowing the weather forecast, so well I am surprised I was not called to appear on BBC news the evening prior, I decided not to hang around too long. The longer it took to test my new waterproofs the better, in my eyes. I set off down the path walking past the moor sign and Loch Vrotachan with a slight meander towards The Cairnwell. Up ahead I noticed my earlier brief companion heading towards The Cairnwell. That was to be my third Munro of the day, so I veered off west following the prompt of my vibrating watch having shaken out the pains of the earlier climb. Here the moor began to open up in front of me where I got the first glimpses of wildlife, a hare bounding off ahead of me and grouse calling from somewhere amongst the heather. The route towards Carn a’Gheoidh, past the extraordinary Creag a’ Choire Dhirich, bypasses Carn nan Sac, but my curiosity got the better of me forcing me to take a peek up at the cairn. It was well worth the small detour despite the protests from my watch telling me “Off Course”. Coming up for approximately two hours I made it to the cairn at the summit of Carn a'Gheoidh, passing another walker on his way down with a brief exchange and being greeted by another sitting within the cairn itself. After a short conversation, again socially distanced, I walked north-west finding a perfect L-shaped rock to perch on with an amazing view towards Carn Bhinnein. After a stop to eat my pieces and sweets (what is a hill walk without some sweets to power you on), I pulled out my map tempted by the views of Carn Bhinnein. Unfortunately, my OS print out did not stretch this far and seeing what looked like coming rain and feeling the wind picking up, I decided that was one for another time. I began to retrace my steps towards The Cairnwell this time avoiding Carn nan Sac, moving much quicker than before in the hope of scaling the last Munro of my day before the rain came. On my descent I met my earlier companion for another brief chat, given the quickness of the walk he had decided to do the Munros on the east side of the A93. I had climbed those the previous year and was not tempted again, especially since it was the first outing in a while. Continuing, my watch, again, vibrated telling me to turn right up towards a steep crag which I was thankful I had made it to before the rain. Using my hands at points I scaled the rocks with great views down into the corrie below. Re-joining the track between Carn Aosda and The Cairnwell I climbed to the top of the ski-lift and a small cairn with a map of the surrounding mountains. Not dwelling for too long I continued the ascent towards the summit, clearly visible with the telephone masts and huts which cover the surface. 2 hours and 45 minutes later I had reached the summit of my third Munro of the day. The bad reputation of The Cairnwell is far more obvious than Carn Aosda, but that did not spoil things with the southside of the mountain giving spectacular views of the glen below. Despite that The Cairnwell is far less appealing to hang around on and with what felt like spatters of rain I made my way down the mountain. The paths were getting much busier now, passing several couples who were starting out their day, just in time for the rain showers. Finally, and unfortunately, I got to test the waterproofs which thankfully worked well and kept me dry. I completed my decent into the car park after a total of 3 hours and 24 minutes, just before the worst of the rain came. All in all, a great way to blow off the cobwebs climbing three Munros, two of which with an unfair reputation in my opinion. I was back in Dundee, via my stop to buy some berries, by 1pm. I had the rest of the day ahead of me although with only a fraction of my previous energy, but the want for more adventures in the coming days, weeks, months and years.