Another scrap of the John Muir Way

Another scrap of the John Muir Way


After my first trips onto the 'new' John Muir Way over Drumbrae, and from Cramond out to Queensferry, I had to work backwards a bit to find another stretch that I could easily reach on foot - earlier in the year I'd looked at just picking it up from Carrick Knowe and coming over Corstorphine Hill from there, but with longer walks approved I decided to make the starting point the place where the canal and the Water of Leith meet - or at least come within some yards of each other vertically!

I had walked beside the river for a short stretch on the way up by the road, but I met the path along it beside the visitor centre, just before where the canal aqueduct passes over. It's not unusual for a canal to drain into a burn below, but this must be about the longest distance for the water to fall! 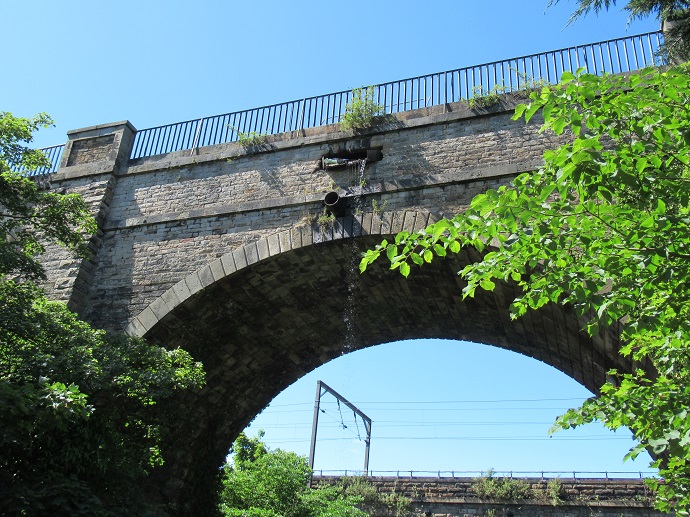 Although it wasn't the way I was going this time, I couldn't resist climbing up to the aqueduct for the view - the railway viaduct also crossing the river, a little lower down, and the wooden walkway. Beyond that there was a long stretch of fairly narrow path, squeezed between the river on one side and a tall fence on the other, first separating the path from a graveyard, and then from a large area of allotments.

There wasn't an awful lot to see along here, although looking into the allotments and wondering why bottles on sticks were such a popular crop was interesting, but at one point a man passing told me that I might see bullfinches at some very overgrown steps - I didn't find the steps, or the finches, but I did find a way down to the river's edge via some tree roots, and sat on a log in the very edge of the water for a while. Something was darting about upstream without ever stopping for long enough to figure out what it was, but a robin came and posed very kindly on a branch just in front of me. A wooden footbridge took the path unexpectedly to the other side of the river, and along the back of some kind of industrial building. I hadn't been particularly looking at the water - it was the excitement of other people that made me look over and see a fancy duck with some fancy ducklings. The path came out on a main road, but I really couldn't figure out just where I was, which surprised me. On the other side of the road was a Water of Leith walkway sign, and from here it was better marked than the John Muir Way, which often felt a bit like hunt the thimble. It takes a lot of signs to say that the path is closed, apparently. it wasn't even all that much of a detour, just a short stretch of blocked off road instead, past an old house, and then a mixed view of old wall and modern(ish) office blocks. The two paths meet again by the metal footbridge at Ford's Road - the route doesn't cross it, but the map in the visitor centre window had told me that this was one of the few remaining signs of the enormous exhibition held in Saughton Park in 1908. Its original glory days my be gone, but the park has been all done up recently and is an impressive space. Oddly, there was a choice between Water of Leith walkway cutting right across it, and 'alternative route following river' - I went for the river, following round another old wall. There's quite an impressive weir here, which you would miss by following the official route. Both paths just pass the entrance to the flower gardens, but it was worth a brief detour. On the other side of the road the path plunges briefly into a kind of tunnel, but it didn't last long. The path eventually left the river at Murrayfield - there were a lot of people wandering by it here, but my route turned out to be along the parallel road (where I met some people I knew and stood talking for a while), and across it and onto the path around the edge of Carrick Knowe golf course - none of this was very well waymarked, although I figured it out in the end. The path here was once the branch railway line into Corstorphine - it's clear and flat, but a little dull. I wasn't on it for long, however, turning back down steps onto a road which led up towards the main road and the way onto Corstorphine Hill. I've been up here a few times before, and even in the last few months, just never following the full JMW route over the hill.

It's quite a varied path - first climbing in shadow under trees by a wall, then crossing open stretches of short worn grass, then a narrow winding path between gorse bushes. Up nearer the top of the hill you're among trees again, and the path follows an old wall round to an odd doorway tucked into a corner. 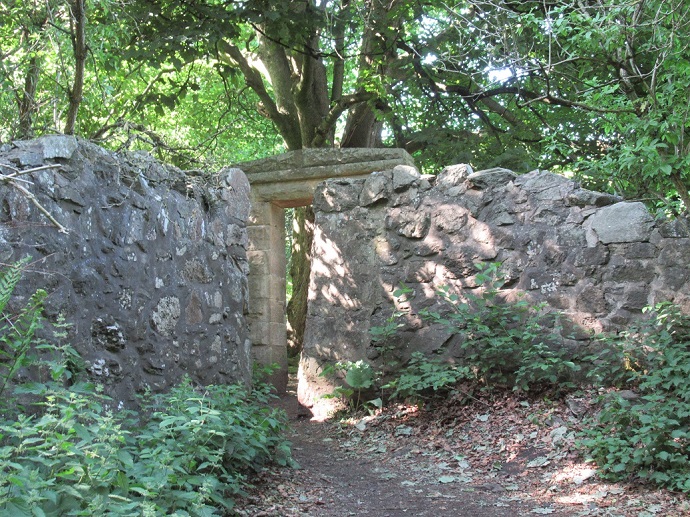 The Rest and Be Thankful viewpoint is the next landmark - mostly a golf course view in the foreground, but stretching over the city to Arthur's Seat and the sea and the East Lothian coast. View from the viewpoint

The path goes on curving round, now running below a fence which is part of the back of the zoo - there's always far more of this stretch than I expect, before it suddenly reaches an open area which is more or less where you come in from the Corstorphine side, and goes on climbing up to the tower near the summit. I managed to take the wrong path from the summit, turning straight down from the tower instead of retracing my steps to the main path, but I realised what I'd done and cut over to where I should be, this being more my usual prowling area - I could have kept to the path I was on and come out in the field by the walled garden, but I decided to do as much of the right path as I could!

Once on the right path it wasn't much further down to the gates of the garden. It's nice in here, although everywhere seems less exciting than it was earlier in the spring - too much green. Plenty of flowers to look at, though. 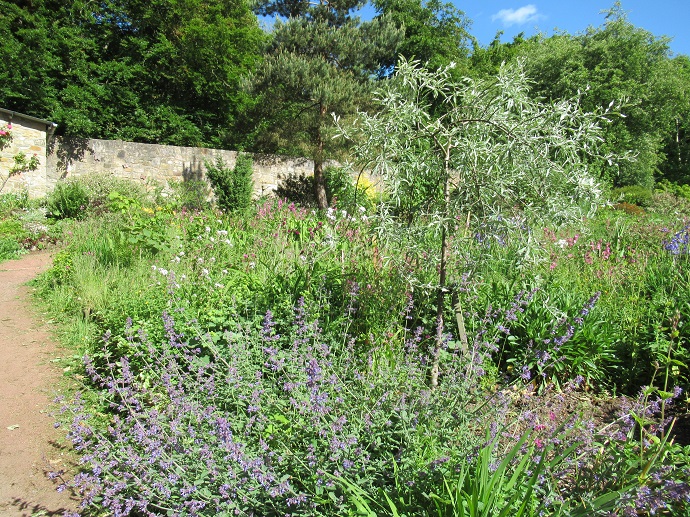 From there I only had to walk the short distance to the road to end up where I had started off the last time.