It was so nice to be back in Inverness - I feel that we didn't manage too badly in Glasgow during lockdown (Jackie's bout of virus and subsequent loss of fitness aside), but it was nice to be somewhere with a garden (however jungly after months of being away) and not have to listen to drunken arguments outside on the street all of the time. After a rather low-key weekend weather-wise, I had to grit my teeth and work for two days while Jackie sauntered off to Loch Morlich to climb Meall a' Bhuachaille - damn school holidays!

However I was now on holiday for a week and the weather was looking good. Where to go? We were limited by Jackie's fitness and desire to not go particularly off-piste until her knee was a bit stronger, but that still left plenty of options. Fortunately it was Jackie that suggested Beinn a' Chearcaill - probably as a desire to find something in Torridon that she could do. I thought it was quite a rough hill to fit her criteria, but since she had picked it herself, it couldn't be my fault if it turned out to be too difficult!

We didn't get up early, and didn't arrive at Bridge of Grudie until just before midday. This was more like it - we had driven through some nice hill scenery to get to Inverness but this was what we were really after 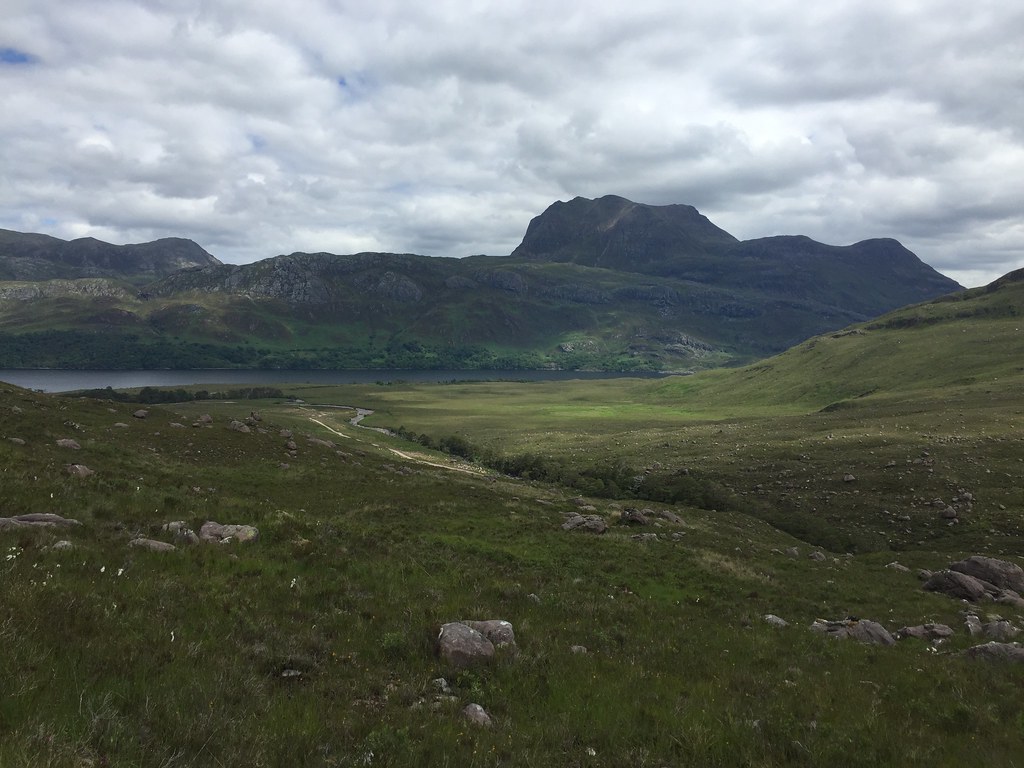 ), then we were away, ascending gradually up the corrie, The new hydro scheme that has been installed here stands out from the main road, but you barely see it from this path. 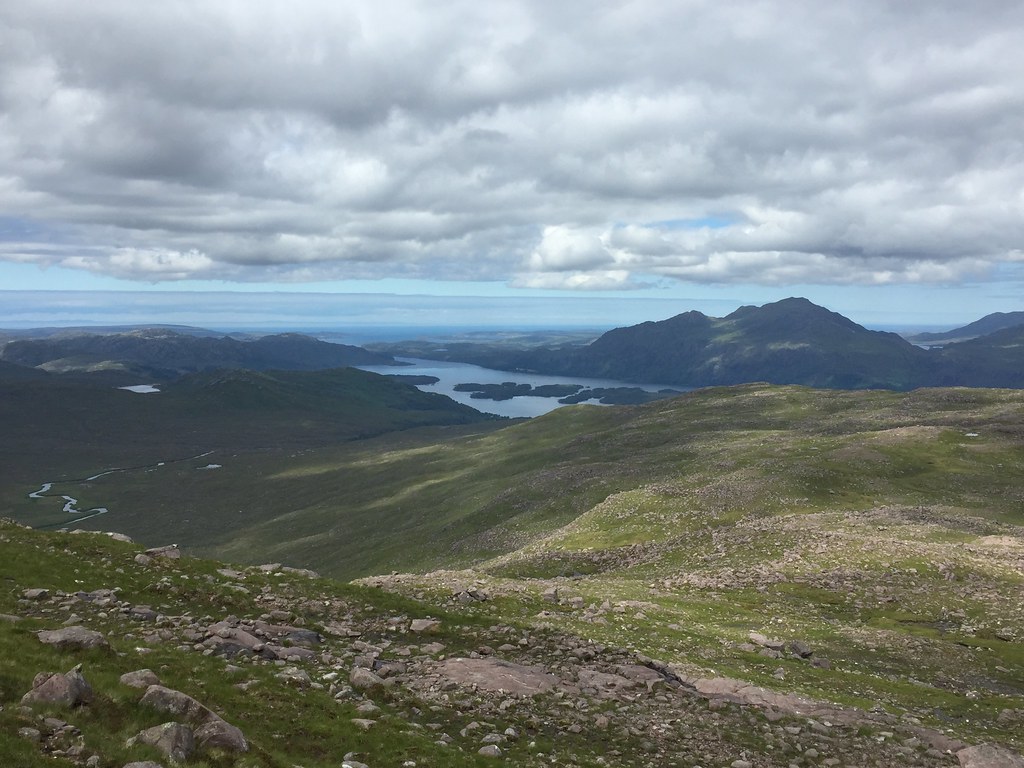 Looking back to Loch Maree

We took a right turn onto a trodden way that traverses up around the bowl of Coire Briste - According to my previous report on this hill, I found this route in descent, but I couldn't remember it being so obvious. I was glad it was here as it made progress onto the broad plateau of this hill easier. Is this hill really that popular? Maybe it is, but given that the path petered out after the lochan, it may well be used more by anglers than hillwalkers. 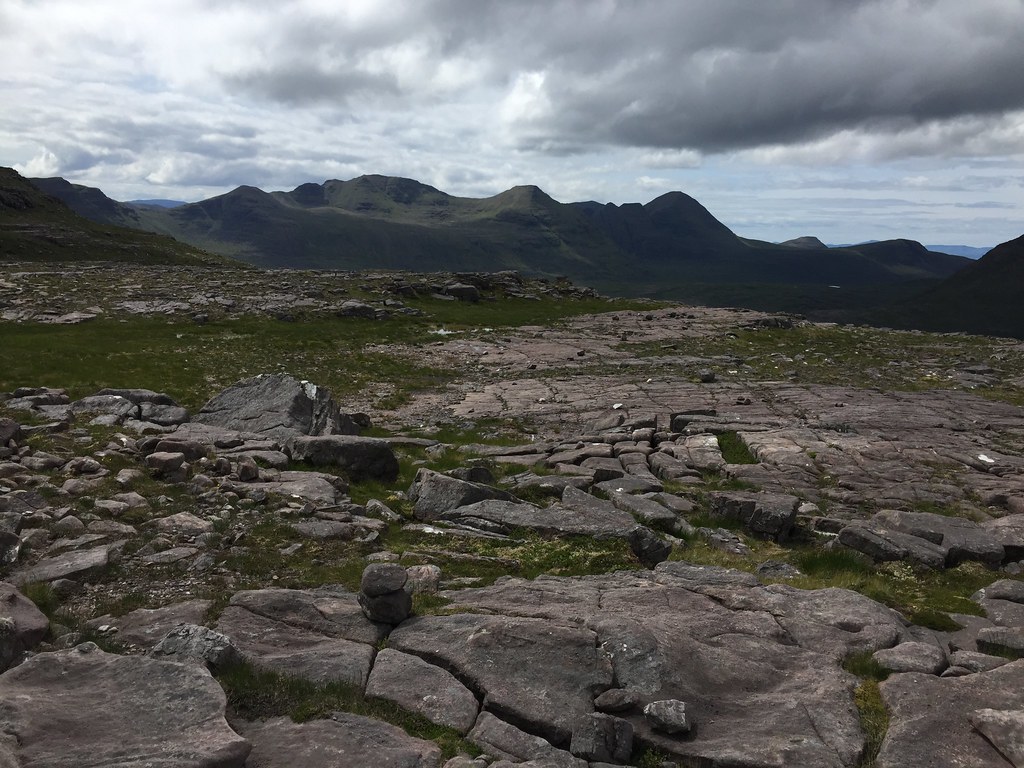 Now we had to head south over rougher terrain - the real decider where Jackie's knee was concerned. We took it easy and it seemed to be OK (although there was some swearing over a number of false summits!) 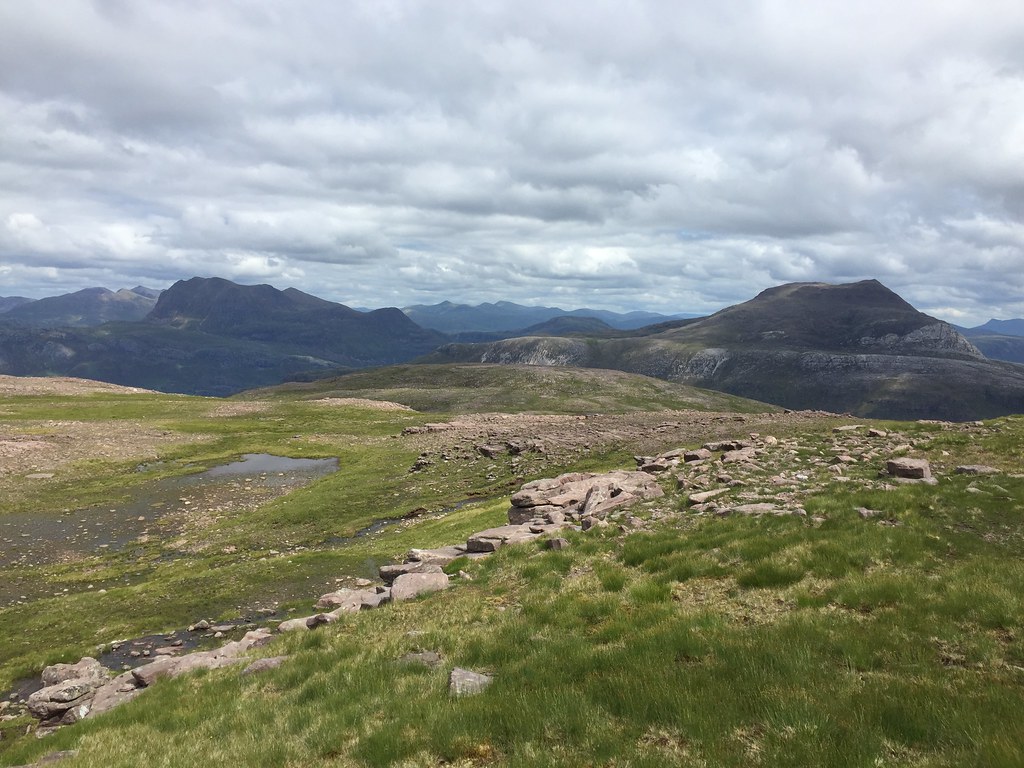 Eventually the last pull to the top drew into view, along with some bits of Torridon to the south. Fisherfield views are obviously abundant from here, and we could see the Trotternish on Skye and also the Harris hills in the distance. How much our horizons had widened in the last few days! In fact given that the winter was so poor this year, it was probably only the 2nd or 3rd time we had seen these places this year. It's hard to explain how good that felt 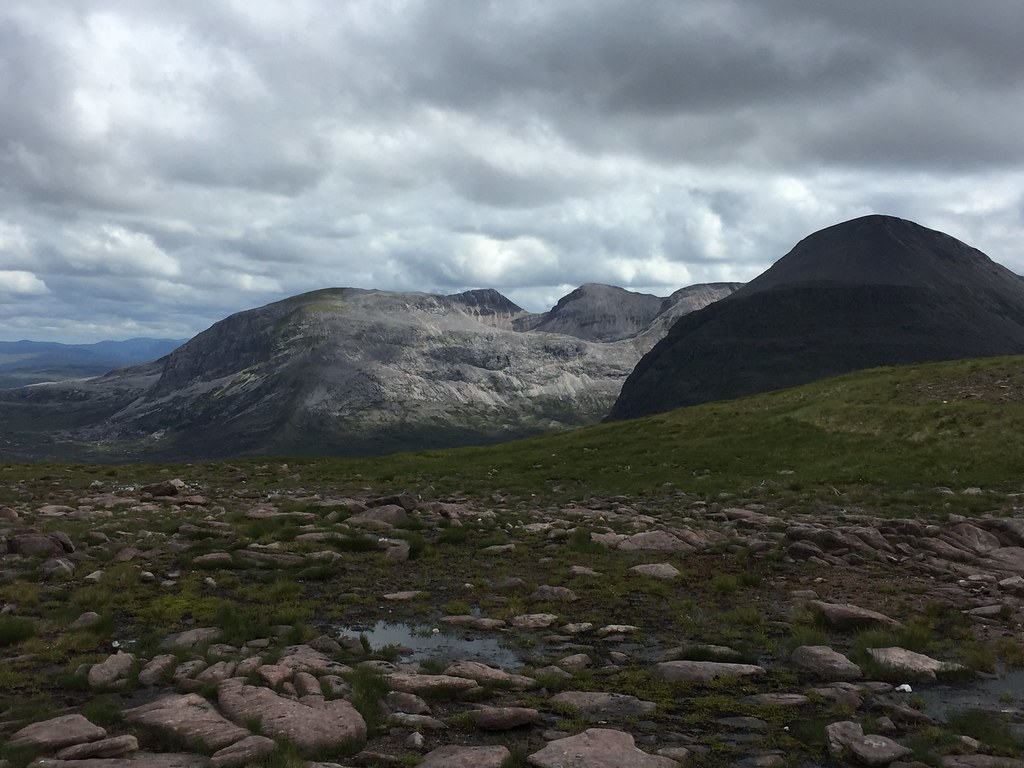 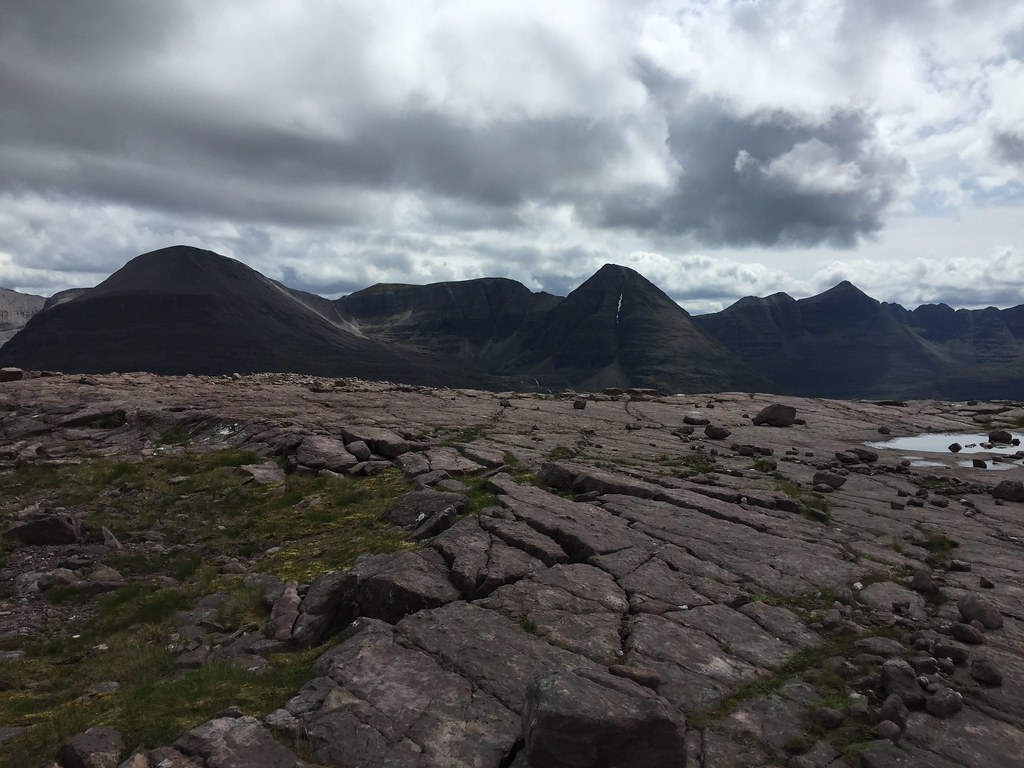 A stroll across the scoured sandstone plateau of the summit took us to a nice vantage point at the western edge - we ended up spending about an hour here despite it not being overly warm for this time of year. Last time I was on this plateau it had been mostly covered in snow -impressive but it took away from the drama of so much bare rock a bit, so it was great to see it in its full glory today. 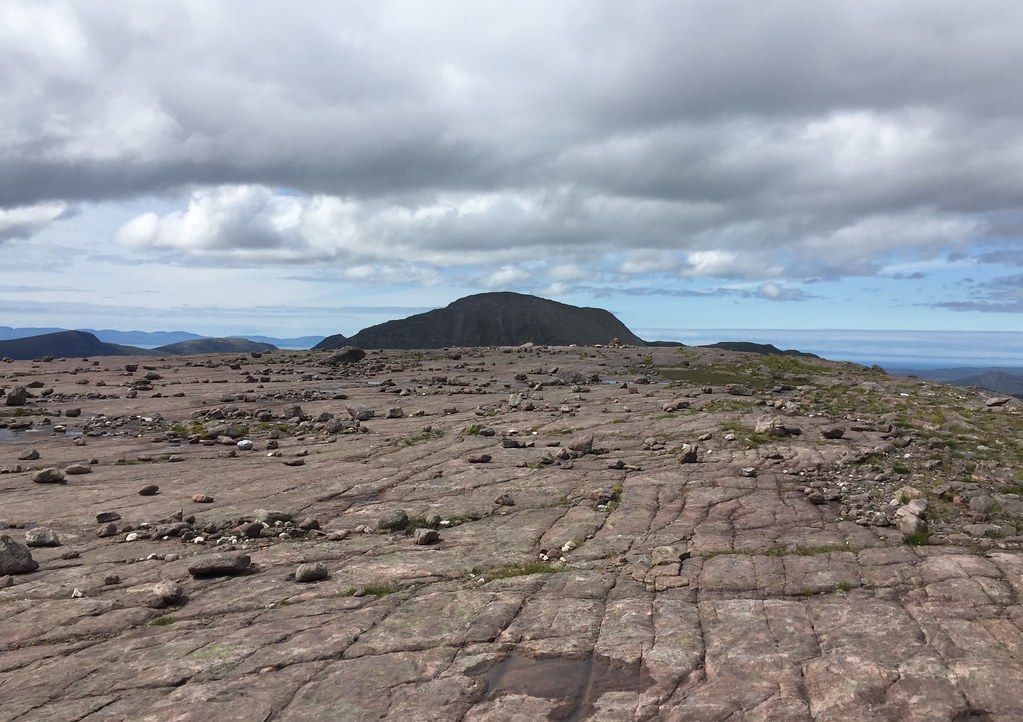 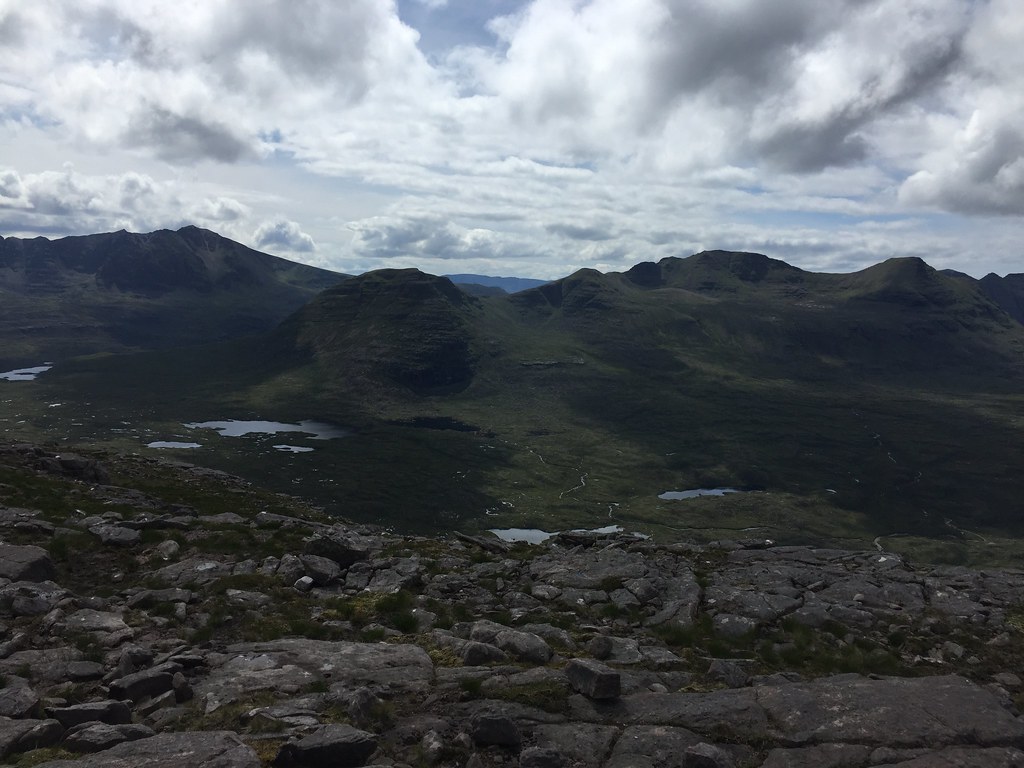 Across Flowerdale to Beinn Dearg 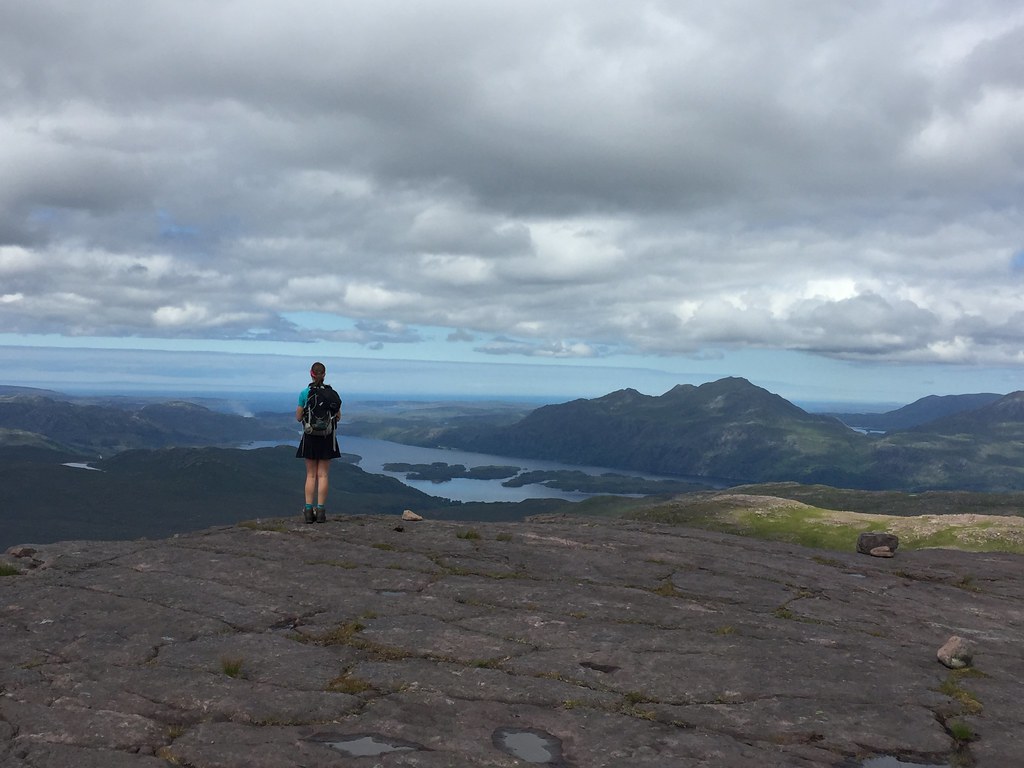 Summit views to the NW 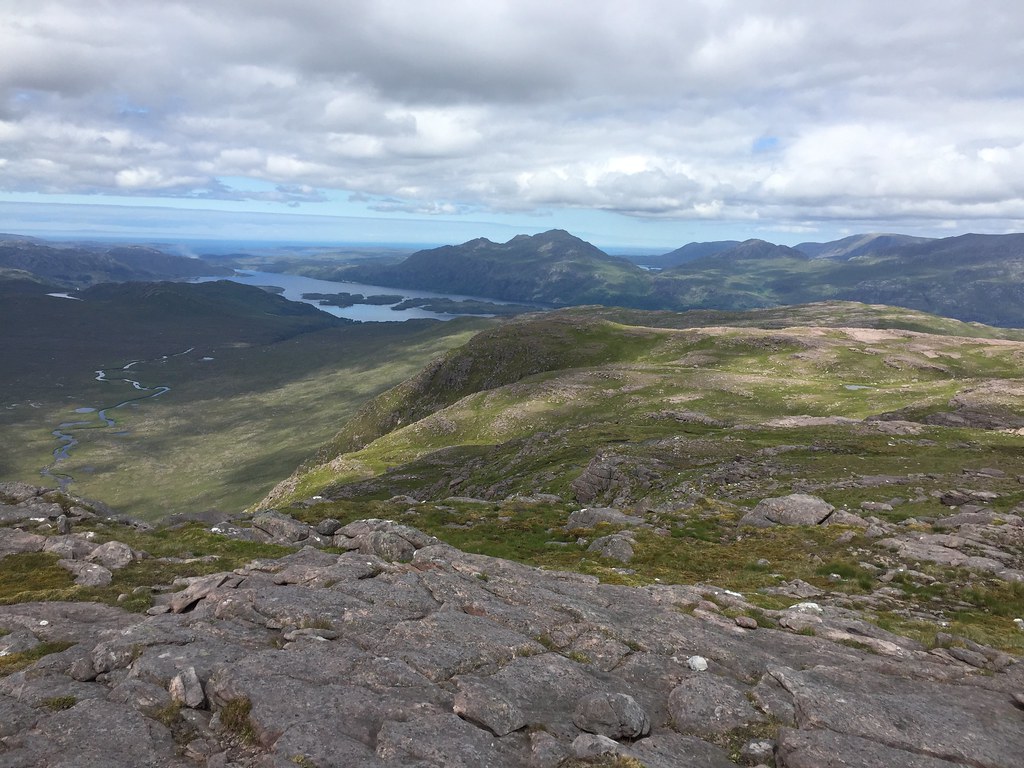 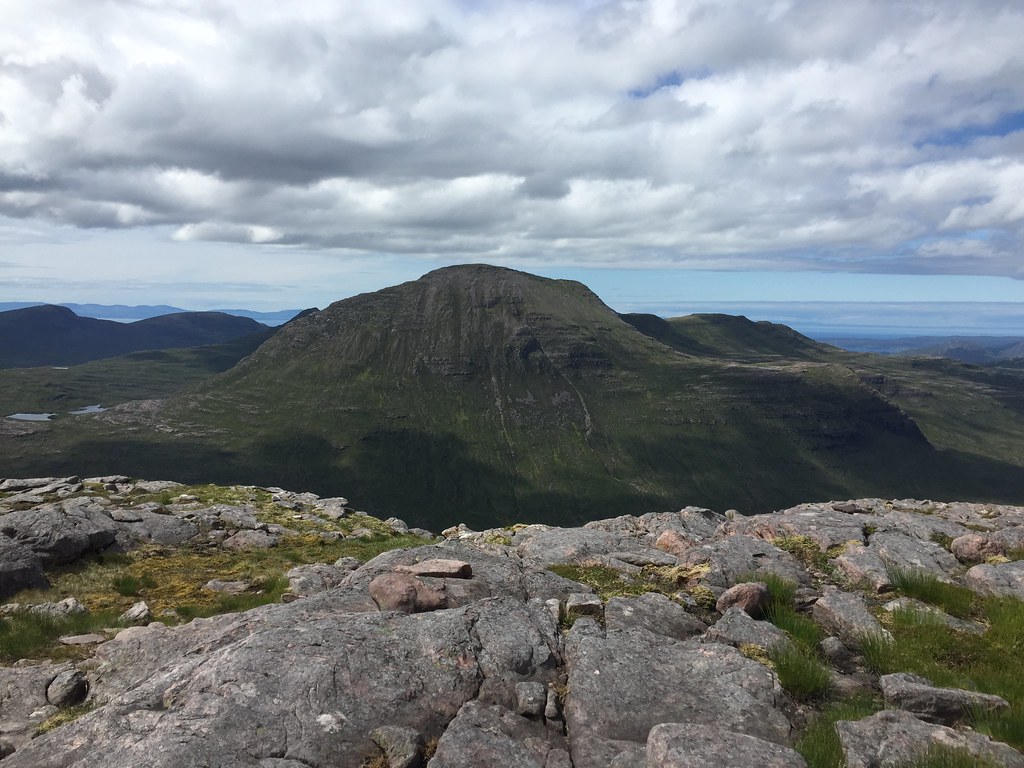 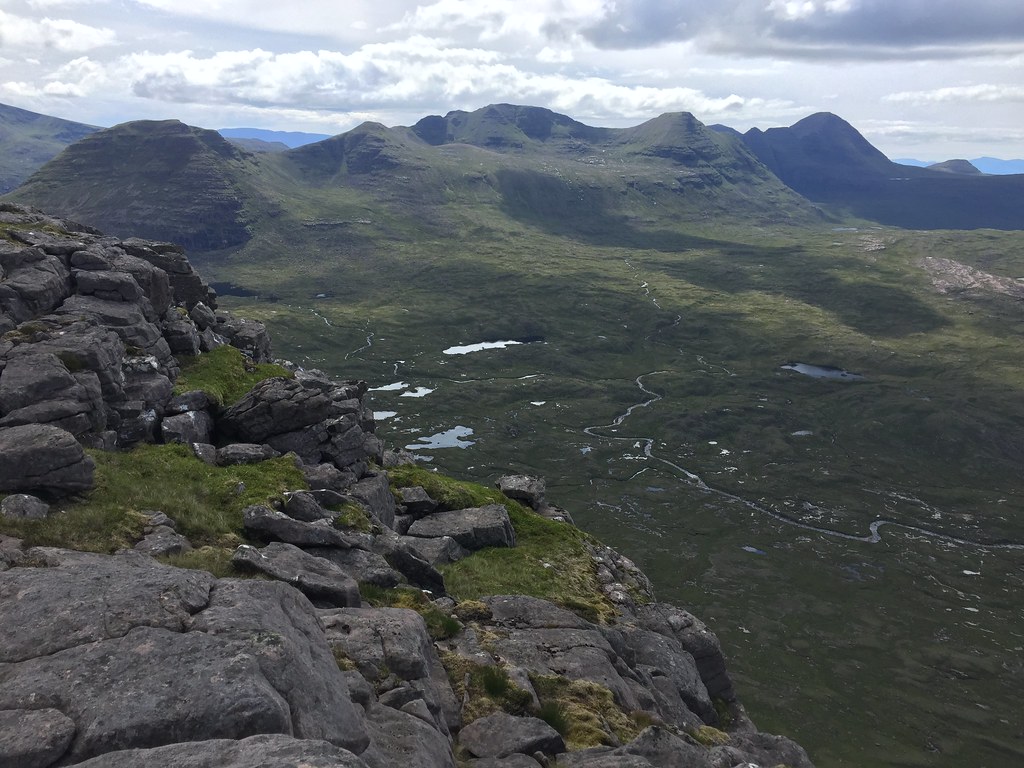 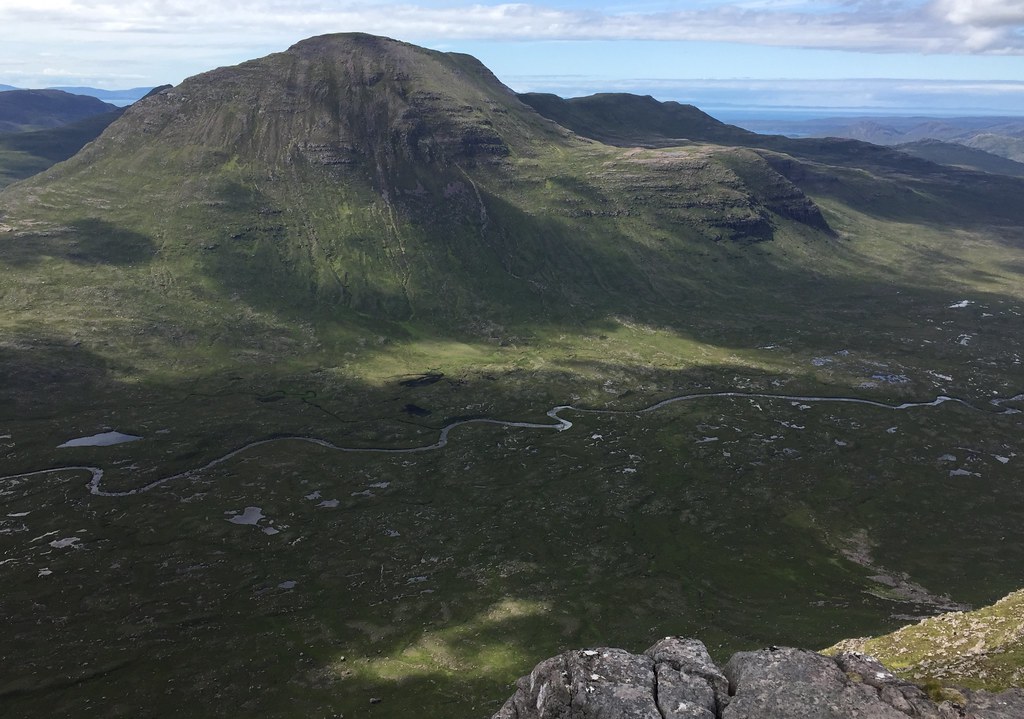 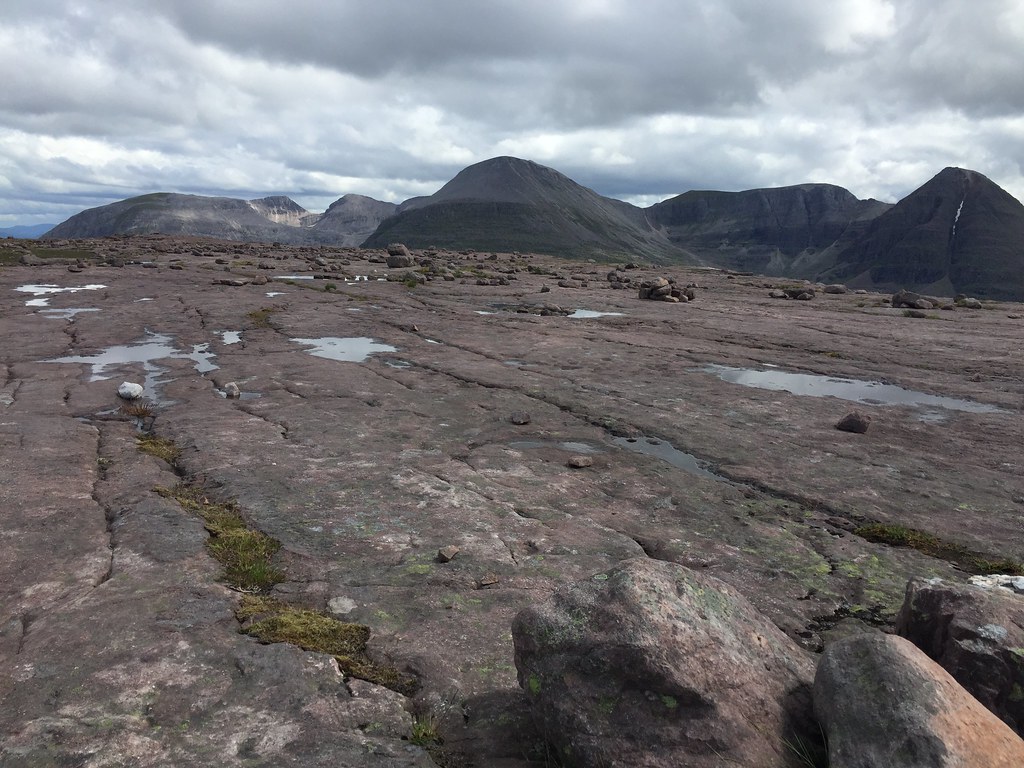 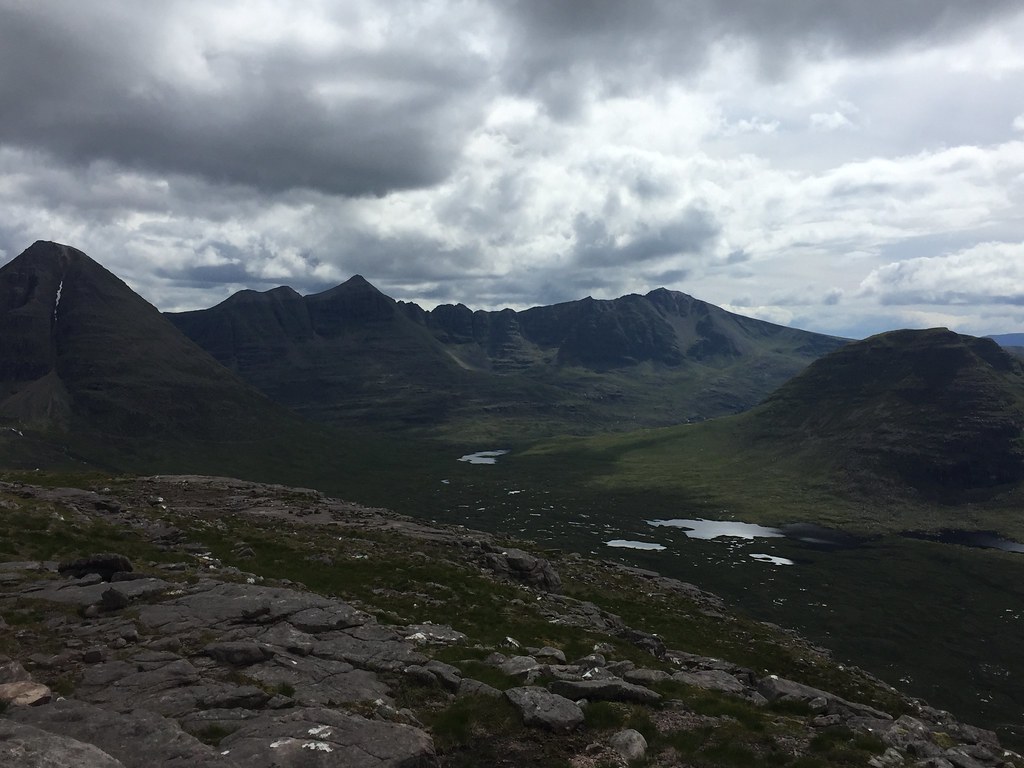 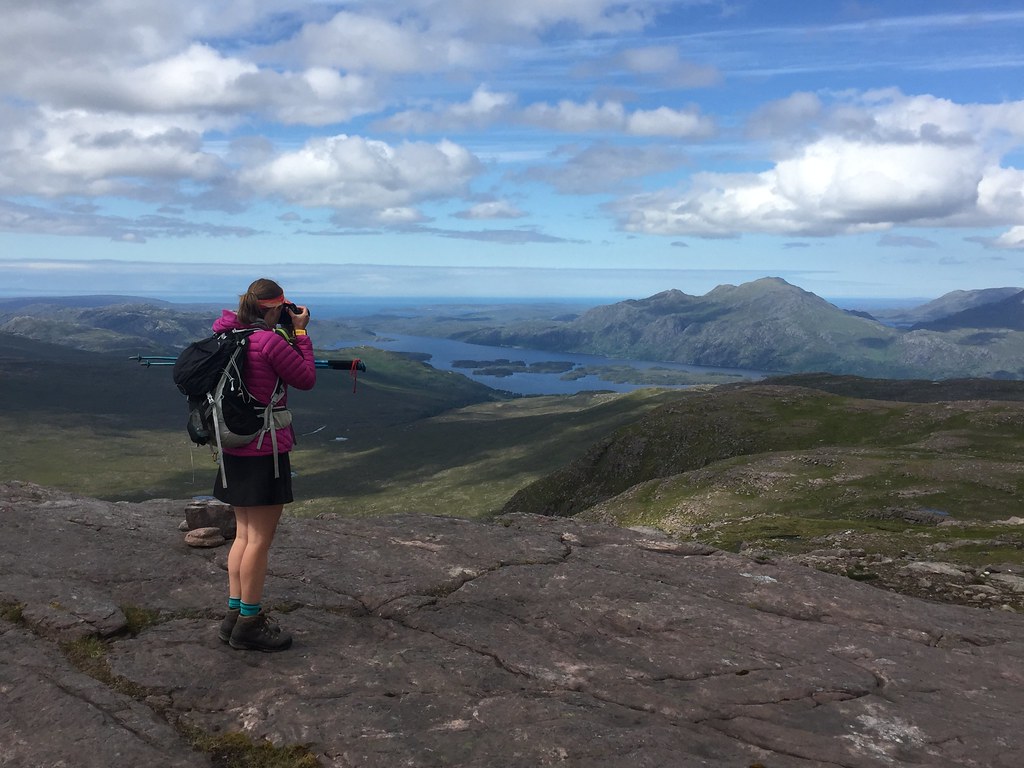 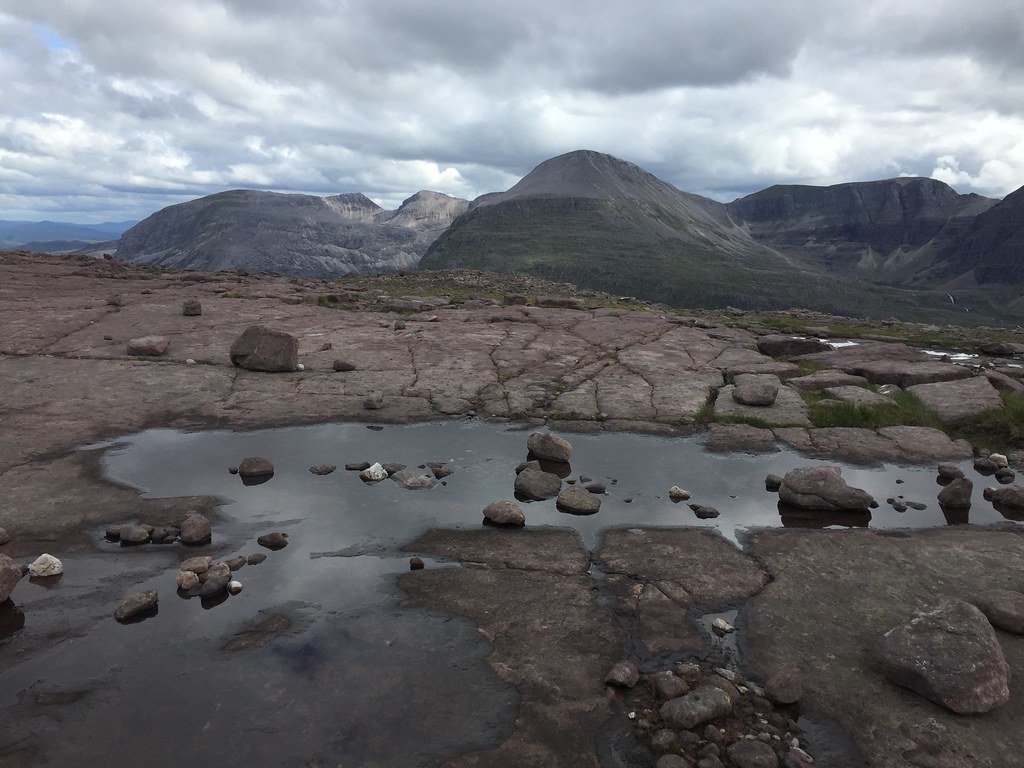 Beinn Eighe from the summit 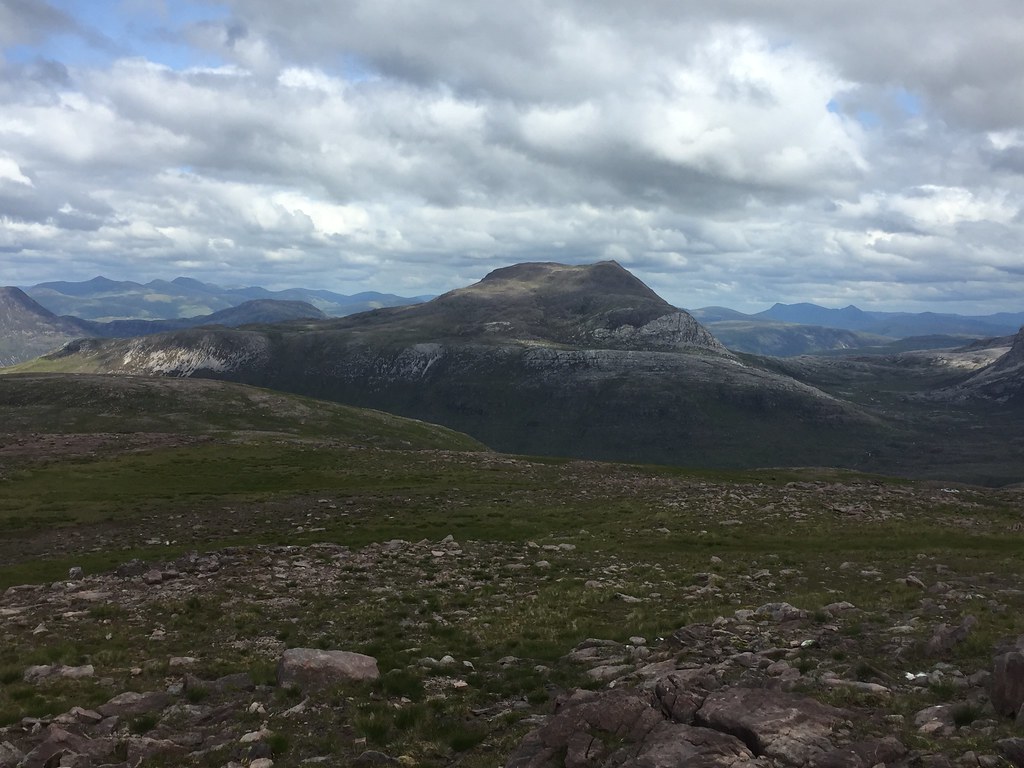 Our descent went a little to the east to minimise the steep ground - this also offered a face-full of Beinn Eighe. Back at the lochan, we picked up the trodden path down Coire na Briste again and retraced our route in. I had a notion to try going up this hill from Talladale to look at the allegedly impressive gorge there, but today was not the occasion for that. 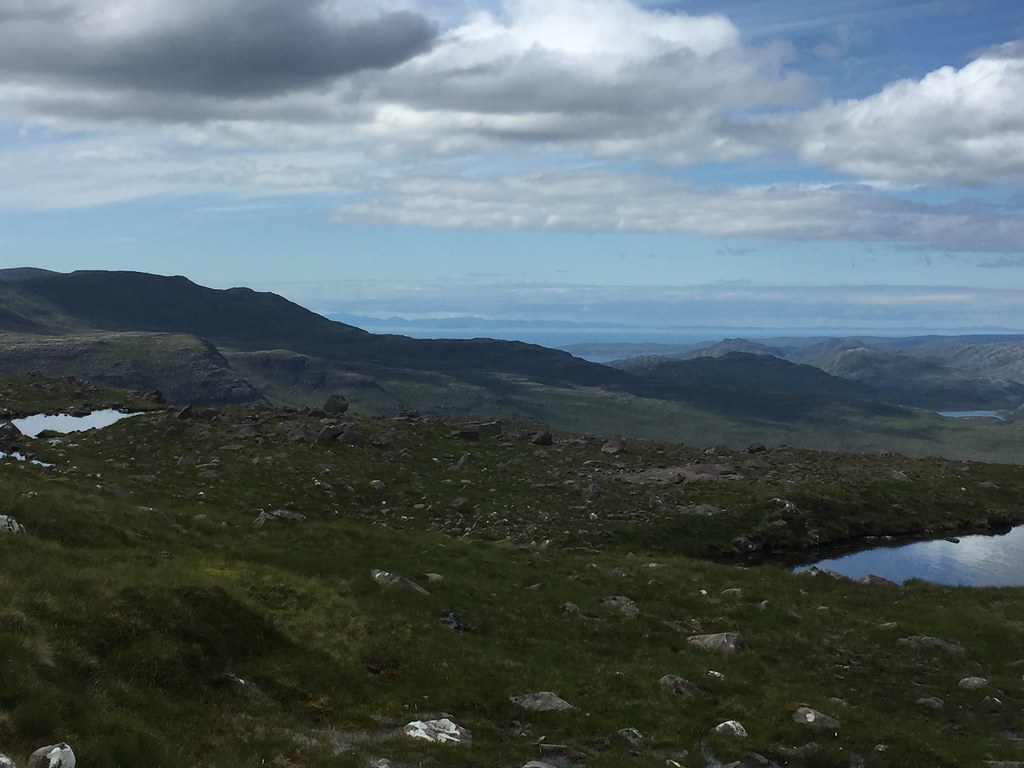 Harris and Lewis in the distance 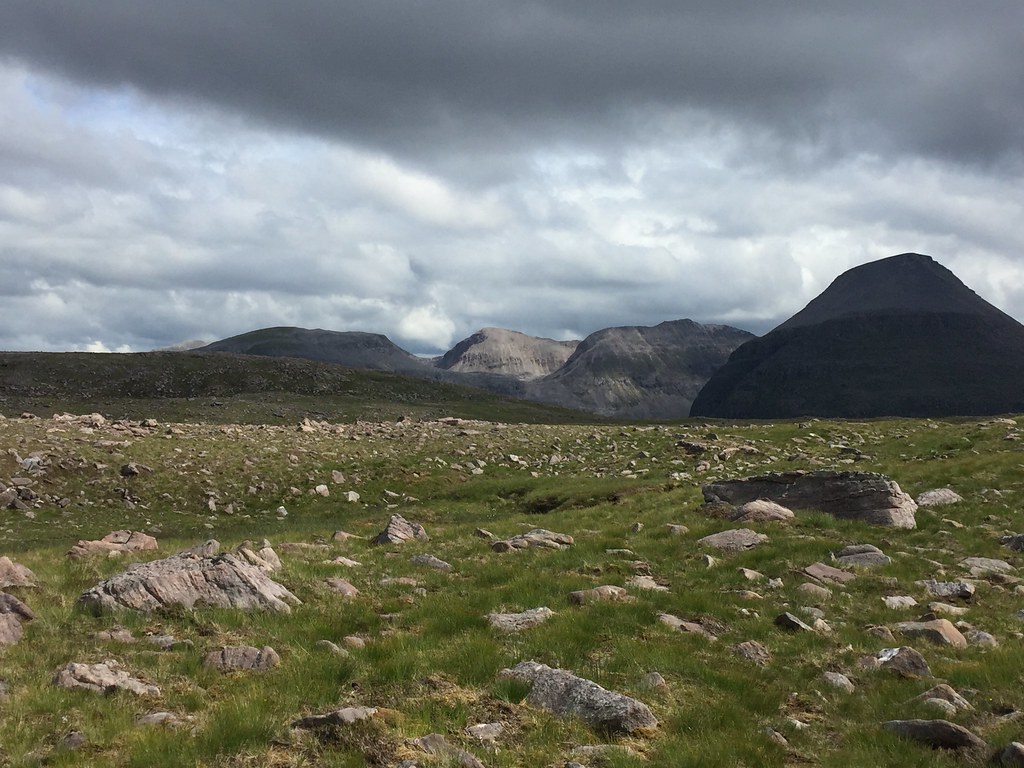 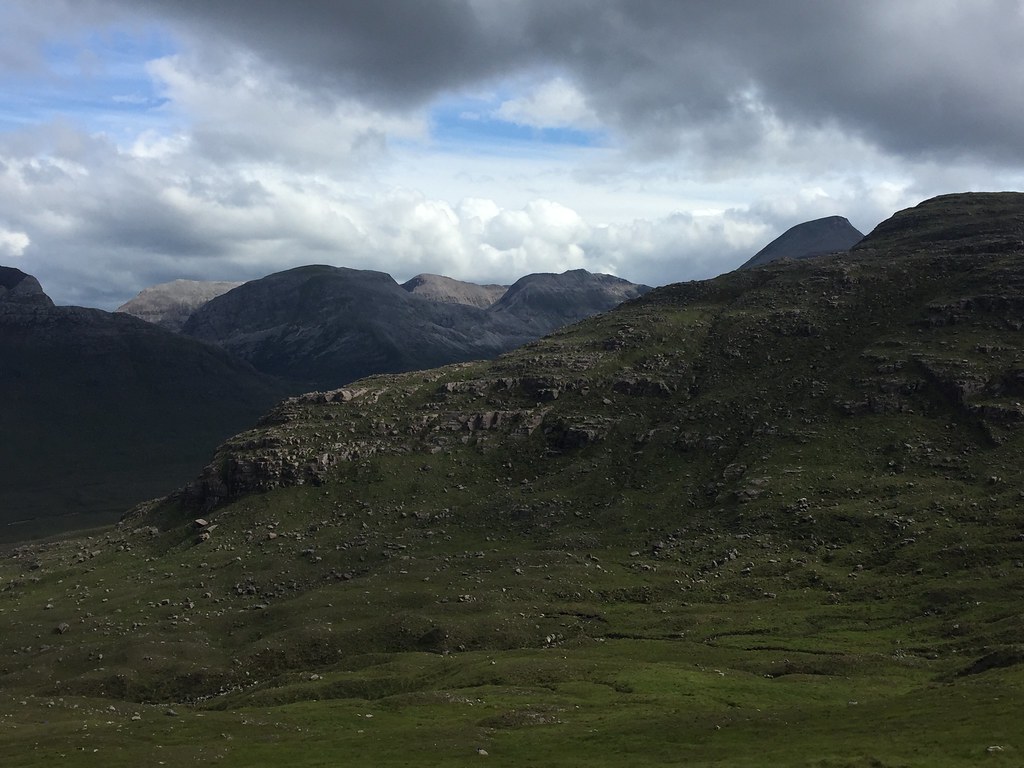 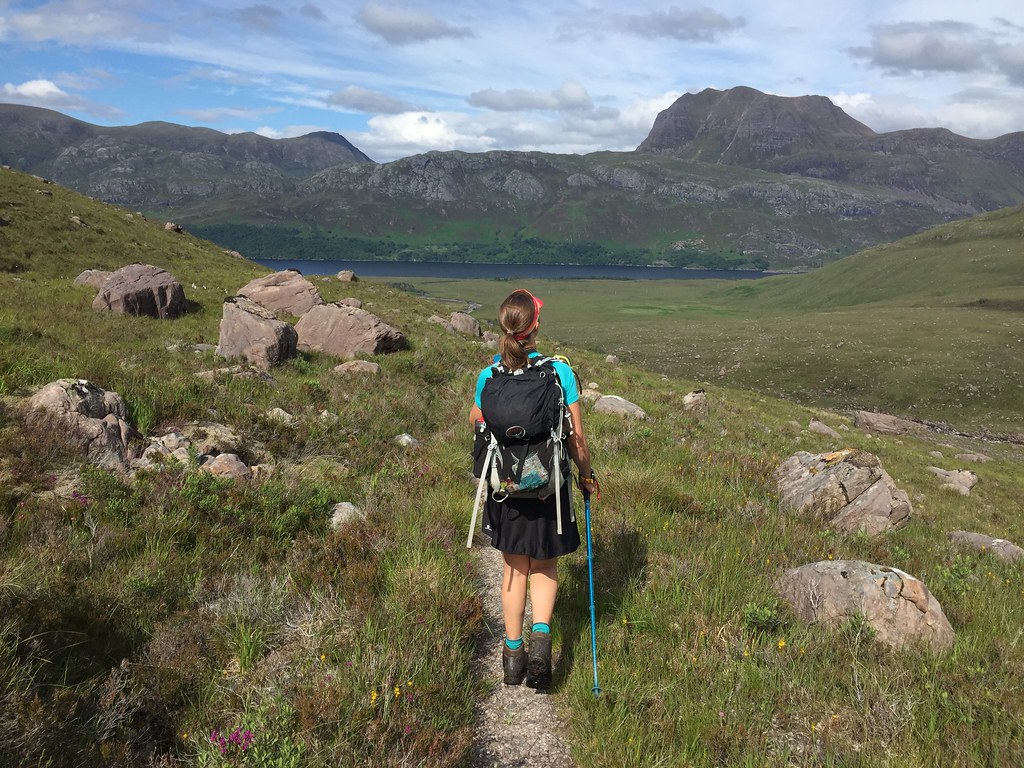 Returning to Bridge of Grudie

Back at the car, we were grateful to have finally been able to go to one of our favourite areas - the extra time away made it all the more enjoyable despite the fitness limitations. I was quite tired that evening as well, suggesting that it wouldn't have taken a great deal more to reach the limits of my own hill fitness! 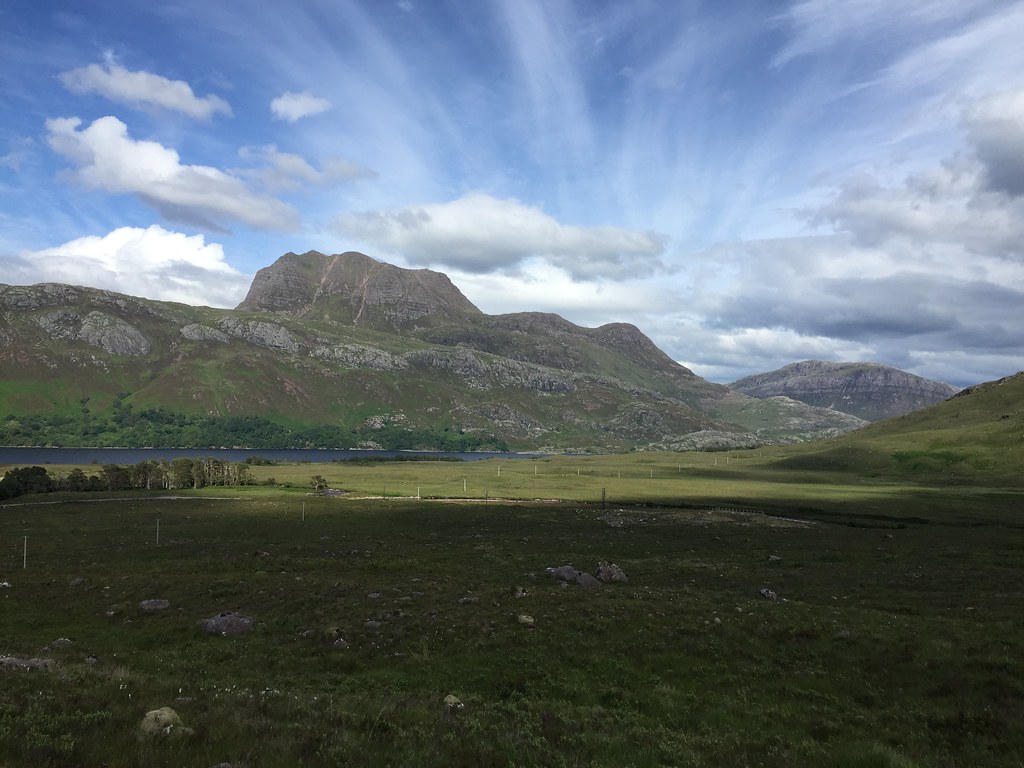 "Torridon never disappoints" - that's for sure! Looking at those pics really gets me restless! As you suggest, one of the benefits of the pandemic, in combination with the crap winter, is that it surely makes us realise how wonderful what we've got is. "It's hard to explain how good that felt" - how many of us have experienced just that on our return to the hills!

I hope to be up in that neck of the woods in the not-too-distant future, as my son moved up to Dundee last Thursday, and he deliberately got a big house, he says, so that we can visit easily!!! Can't wait!

Lovely! We were up there the day after you. And also feeling the lack of hill fitness: pretty wiped out after this and Beinn Eighe the day before.

Have also thought about the Talladale approach but it looks like pretty rough going.