After last week's little walk in the Kilsyth Hills, I needed to up the ante a bit to test to test both my physical fitness after the inertia of lockdown, and more importantly my body's reaction after an attack of sciatica taken at the beginning of April, which had mercifully eased off somewhat over the last few weeks but had certainly not gone completely. I still had some pain at the back and side of my knee and numbness in my foot, but didn't feel it was hampering me too much. But there is only one way to find out.
Looking for a step up in challenge, not TOO hard, but not particularly wanting to repeat something I had already done, late on Wednesday I chose a pair of hills I have driven past many times and which many people will have seen when looking from south of the River Forth across to Fife, East and West Lomond. (I was told the locals call East Lomond, Falkland Hill). A quick couple of texts to me and my grandson Matthew's sometime walking buddy Andy and it was agreed we would meet up in Falkland at 10am the following morning. The weather forecasts were pretty good. Perhaps we would catch a few showers and this is indeed what happened, although they were pretty short and didn't really interfere with our enjoyment.
We parked at the cul de sac at the very beginning of the East Lomond track and very quickly we entered a wooded area. Although a relatively small hill there is no walk-in to get your muscles loose, it's quite steeply uphill from the very start, so very quickly I was breathing quite heavily. There were several staircases in the woods to aid ascent, but I'm not convinced that they do. Stairs in the woods heading up from Falkland.

Shortly before we exited the woods, Andy realised that he had forgotten to put his food and drink into his rucksack. Matthew and me had arrived a little earlier than Andy and were suited and booted, ready to go, on his arrival and his rush to join us had probably caused his lapse of memory. Despite offers of shared rations he headed back down the track and would do the the lung busting hike through the woods twice😓.
When we left the woods the path rose more gently over open ground before reaching a gate, after which there is a steeper pull up towards the summit. Left the woods. Falkland below. Despite doing the wooded area twice, Andy was already back in view when Matthew and I reached the summit and indeed was only about 5-10 mins behind us onto the top. Boy, were we slow

.
There was good views from the summit. Down the Forth, with both Bass Rock and Berwick Law at North Berwick easily recognisable. Swivel round and The Ochils, Ben Vorlich and Stuc a'Chroin and Schiehallion were among the usual suspects on view. Just to illustrate one of the effects of the lockdown, Matthew who last year was constantly beating me to the summit of Munros, had found the going pretty tough so far and we considered calling it a day and allowing Andy to proceed onto West Lomond, but fortunately after something to eat and drink he got his second wind and decided to carry on and, to be honest, wasn't bothered after that. There now was the long walk towards West Lomond including a midway descent into a car park. 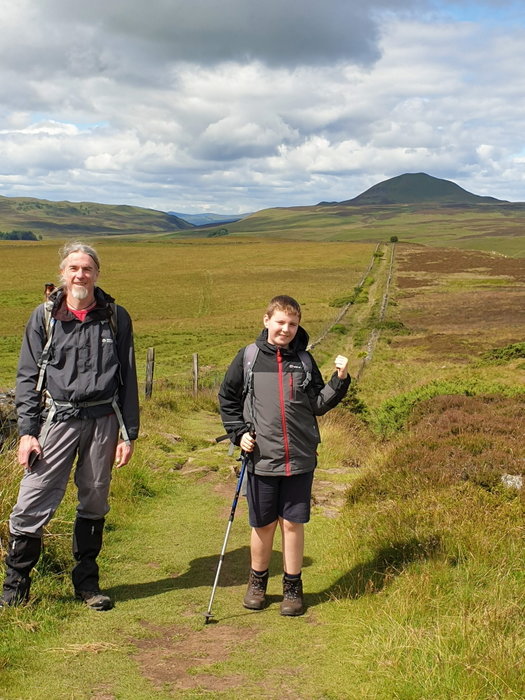 Me and Matthew heading for West Lomond.

I got a into a socially distanced conversation with Ken, a chap from Glenrothes who gave me some nice local info on these hills. Me and Matthew again!!!

As we approached West Lomond we could see that there was a direct steep track up to the summit, a second path that left the big track a little later but still gave you a nice wee pull, or we could keep to the main track which circled round the back, a little longer but more gradual. We decided to take advantage of the path a little longer and went for the mid option. The pull up to West Lomond.

It didn't take long for us to pop up onto the summit of West Lomond which at 522metres is the taller of the two hills. It immediately crossed my mind how unlikely a scenario approaching a summit trig point was just a few short weeks ago. I was incredibly down regarding my physical condition and was thinking that this year would be a hillwalking washout and perhaps I was finished for good

. So even these modest hills filled me with joy and hope for further adventures.
The summit was relatively quiet and a second food and drink break was taken. A lady appeared on the summit and I overheard her telling someone else her dog had run off. (more in a second).
Refreshed, views were taken in and pics snapped. Looking back at East Lomond. Looking over the Forth.

We headed off down the easier gradual path. Here we met again the by now pretty agitated woman who still hadn't found her dog. Whether the dog should have been off the lead here is a moot point and not being a dog owner don't want to get into that debate. Anyway mentioning that would do nothing for the distressed lady. She told us it was a golden spaniel and had a phone number on its collar, and we said we would look out for it, but we never saw sight nor sound of it and don't know what the outcome was.
When reaching the carpark again we took a different path that would skirt round East Lomond and take us through Maspie Den. East Lomond from our bypass path.

With shading from tall trees, a stream, bridges and tunnels, a deserted house, all three of us were happy we had returned through the Den. It was really dark in there! Soon we came to the outskirts of Falkland and after some pics at the Bruce Fountain in the High St. we headed uphill and back to our cars. Andy at the Bruce Fountain. Me and Matthew at the Bruce Fountain.

A little side story. A couple of years ago, my wife and I were sitting outside the Covenanter Hotel in Falkland enjoying a drink (Becks Blue for me☹), when a smart mini bus pulled up beside the fountain. About 10-12 smartly dressed ladies jumped out and immediately started running around taking pictures, mostly around the fountain. Then they came over to the hotel where we were able to hear their accents. Obviously American

. They rushed into the Hotel and reappeared a couple of minutes later along with the barmaid (is that PC?) who had served me. We watched, puzzled as to what was going on, as they, in turn, donned a face mask and had their pictures taken on their cameras or phones by the barmaid. A minute or so later they piled back into the minibus and were gone. On returning our glasses I asked the barmaid what had just occurred. Transpired in was Outlander (TV prog) tourism. The fountain and hotel feature in series 1 of the now worldwide success that is Outlander. The masks were of the TV heroine Clair. The group were in Falkland max 10 MINS

.
It had been a fine day and now I needed to work out what the next step would be to help me regain my hill confidence.
PS. estimate of length and ascent are from a previous report by Stretch.