Carn a'Choire Bhoidheach and Carn an t-Sagairt Mor have been on the radar for a while, two annoying red balloons amongst a load of blue and finally I decided it was time to get these two ticked off. I opted for an approach from Loch Callater, the car park was busy when I arrived (as were loads of laybys on the way there) but I managed to get a space and off we set - me and my two collies Moss and Zena. 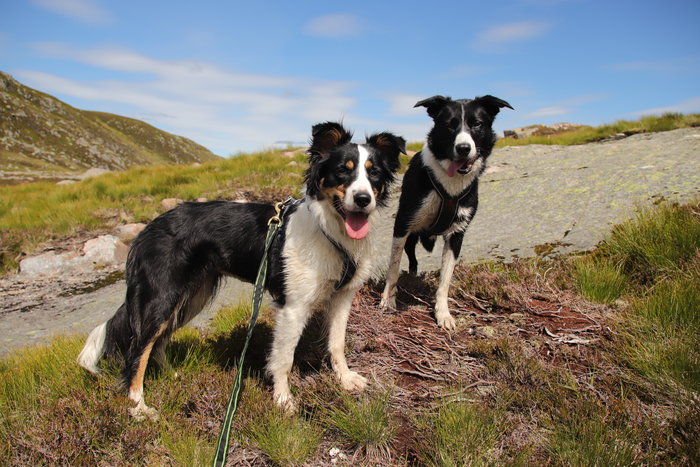 The route along to Loch Callater was one I've done a fair few times before so there wasn't much dawdling around and after an hour we were turning onto the track that took us up the side of the glen. There were two people ahead and they looked very high up compared to where we were, but in no time at all we were up to that height following the good, well-made track. In some places it narrowed and was eroded, but even the it was easy walking with a couple of small burn crossings that were no problem at all and we reached the slopes of the first target of the day - Carn an t-Sagairt Mor - and following the good footpath until at the rusty old gate we turned off to follow the fenceline on a fainter path. 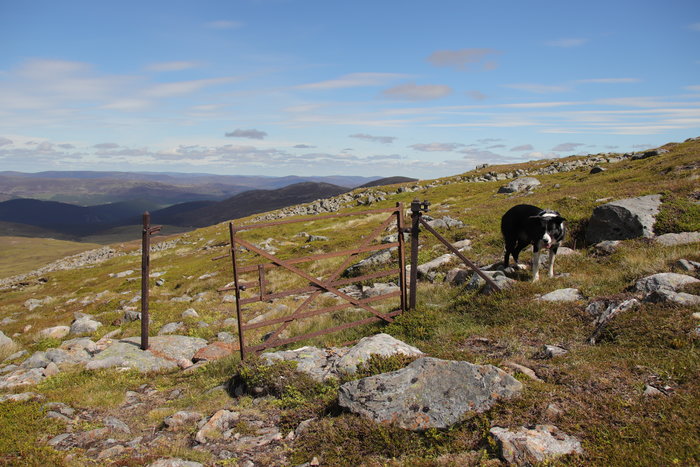 The rusty old gate, I was hoping maybe Moss would stand waiting for it to be opened...but she's not stupid!

On the way up there was a raucous from a ptarmigan, a couple of youngsters had decided to camouflage themselves on the very path we were on. Further up and not far from the summit we found some of the remnants of the RAF Canberra aircraft that crashed into the side of the hill, first finding one piece and then Moss spotted a larger piece of wreckage amongst some rocks. It seemed to be of interest to her and she spent some time investigating the wreckage. 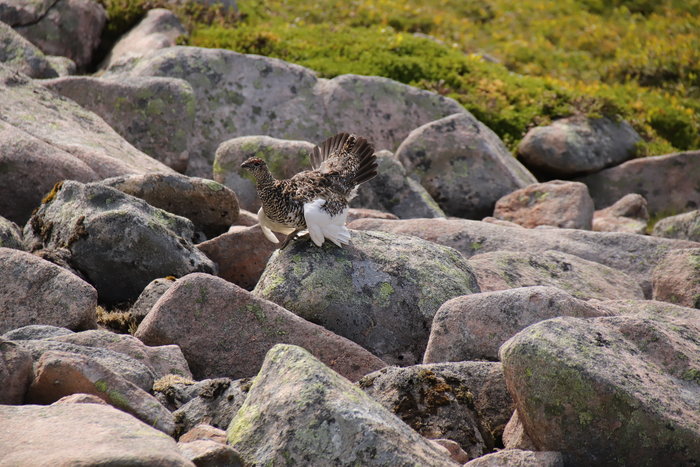 Mummy ptarmigan acting as a distraction, the youngsters already well away. 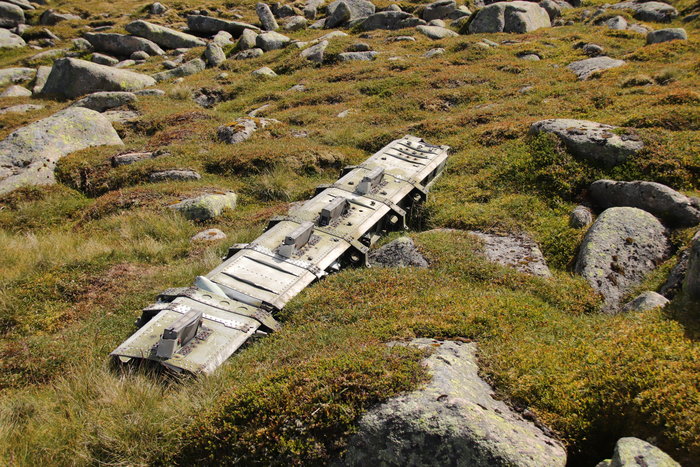 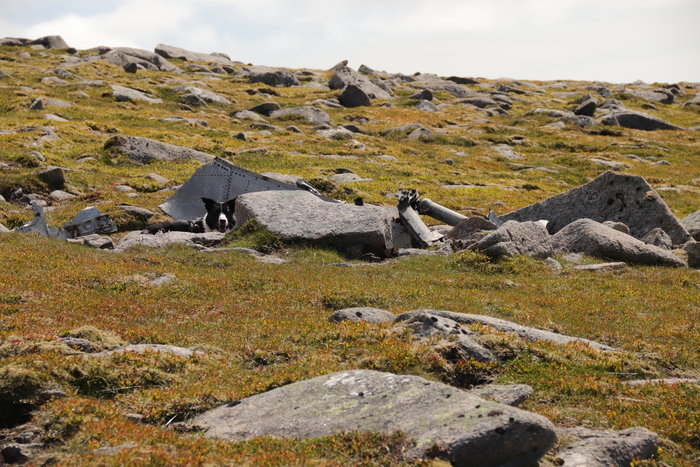 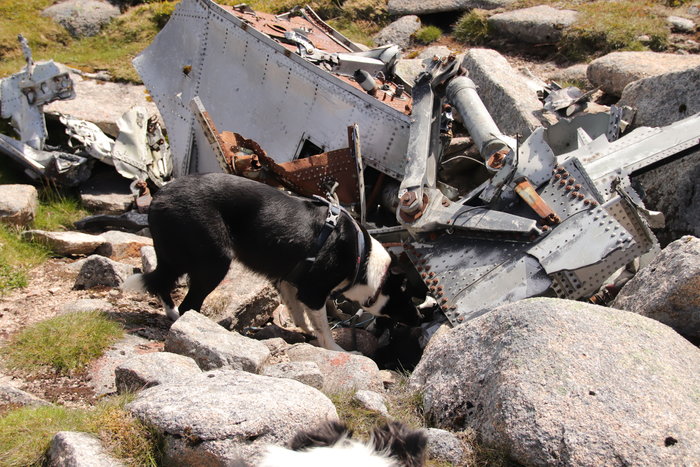 Moss very interested in the wreckage, bit different from the JCB's and construction pipes she normally finds. 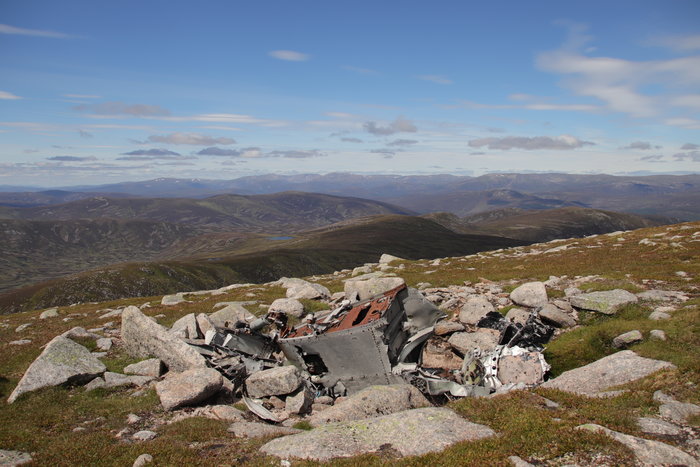 The wreckage on the hill

Eventually we followed the last bit of the fenceline to the busy summit. I got a photo of the girls at the 2nd, lower cairn which seemed to be attracting more attention than the cairn at the true summit where some people were sitting having lunch so I skipped trying to get a photo there with the girls just in case they decided to invite themselves to join them. The path up to Carn a'Choire Bhoidheach was clear to see, the slopes of the next Munro looking a long way up. We cut down the hillside, the walking easy, towards the track passing through a boggy bit where the girls could have a paddle to cool down before we started the ascent. 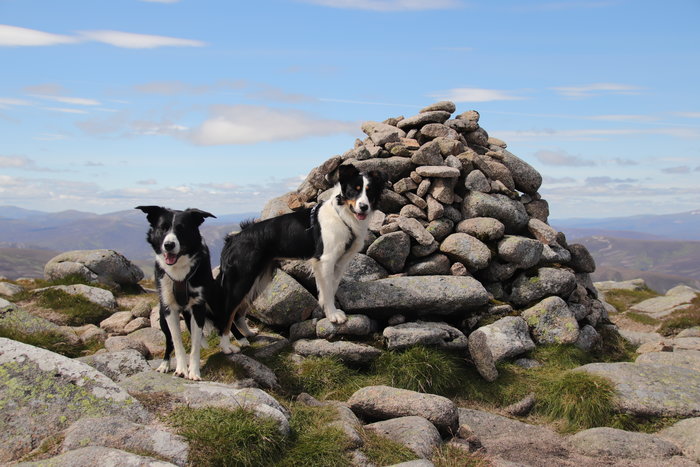 The good path led us up passed a few more boggy bits where Zena partook in her new fun game of boggy dig-dig this one with added pounce-pounce. She saw what I think was probably a frog in a pool on another walk, and this is what started this game. There doesn't seem to be any real rules, though I think she may well be challenging herself to get even more muddy with each game. 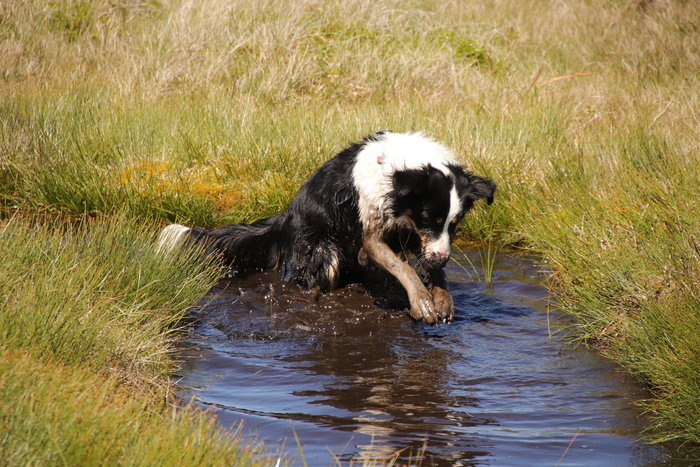 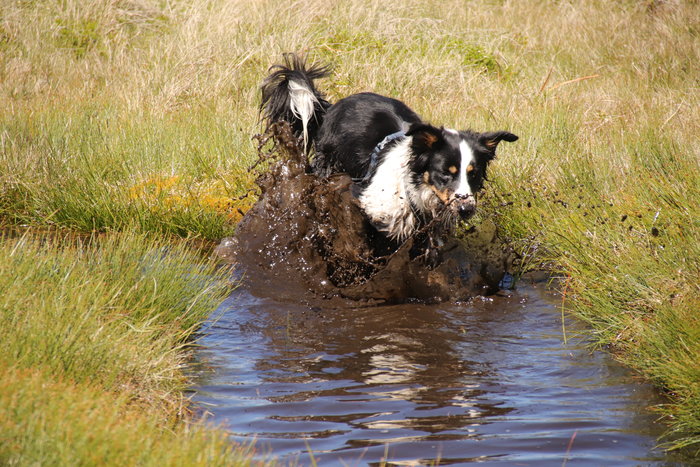 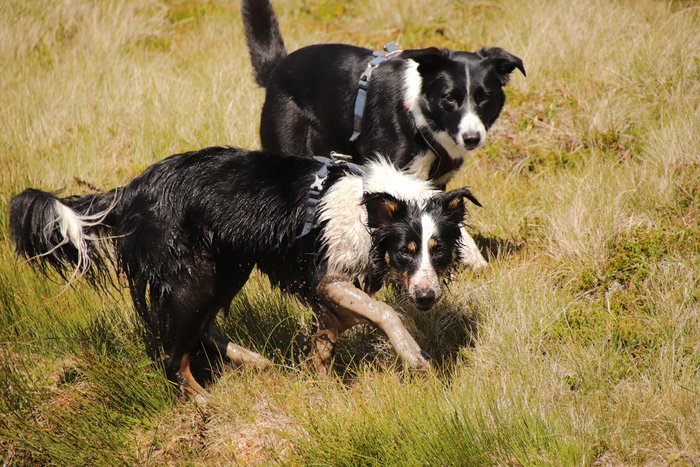 Suitably made up in mud, Zena was finally happy to continue on towards our second Munro of the day. We continued to follow the path until finally we simply cut across the slope towards the summit. The ground cover was low and posed no difficulty to walk on and we found some sort of path in places to follow. The summit of this one was a bit quieter, though we only had time for a couple of photos before more people started to arrive so we headed a short distance away to have lunch. Afterwards I tried getting some photos of myself with the girls on a rock and a couple came along and offered to take our photo - thank you

By this point I noticed the summit was free and I set up the timer on the camera and we got a summit photo too. Zena's 7th, Moss's 46th and my 48th Munro. Getting so close to 50! But that will have to wait, I'm wanting Moss and myself to reach the big 5-0 on the same day so she has to catch up with at least one of the two I've done that she hasn't, one of which is the Munro that dominated the landscape behind us - Lochnagar. This one I did with Millie and was one of our best hill days, I'm not entirely sure why Lochnagar has been neglected by us for a repeat for so long but hopefully that will be put right soon! 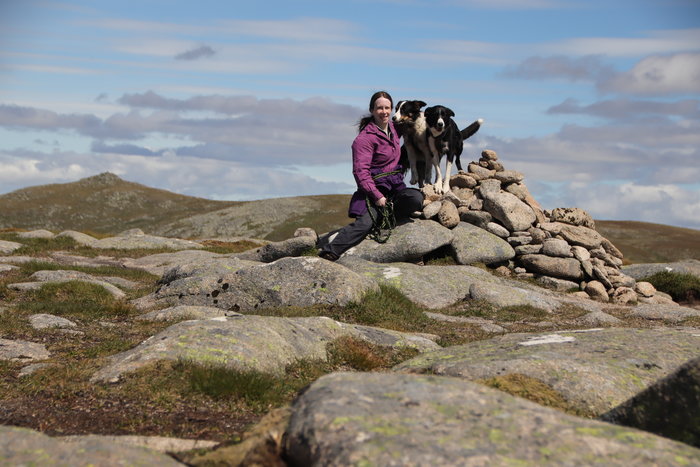 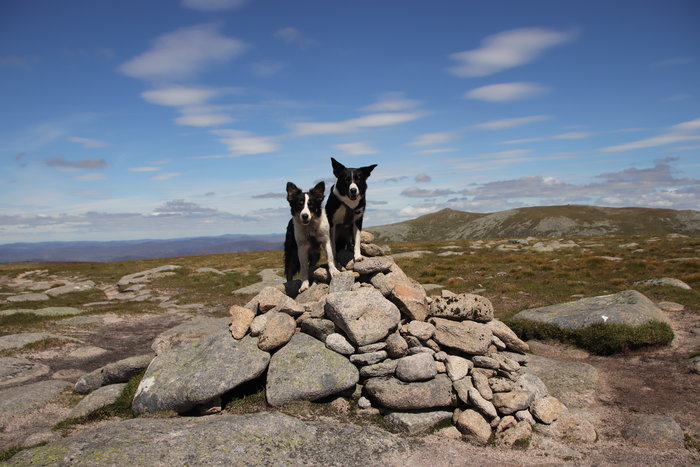 The girls at the summit

Zena was allowed to have a stretch of her legs at the summit, so much energy, before we started heading down the slopes towards the path returning to the boggy pools so the dogs could cool off in the water before taking the bypass path around Carn an t-Sagairt Mor spotting another piece of plane wreckage on the way round and walking up the hillside a short distance to reach it before returning to the bypass path which took us back round to the gate, and from there it was a case of following the route we came up all the way back again. 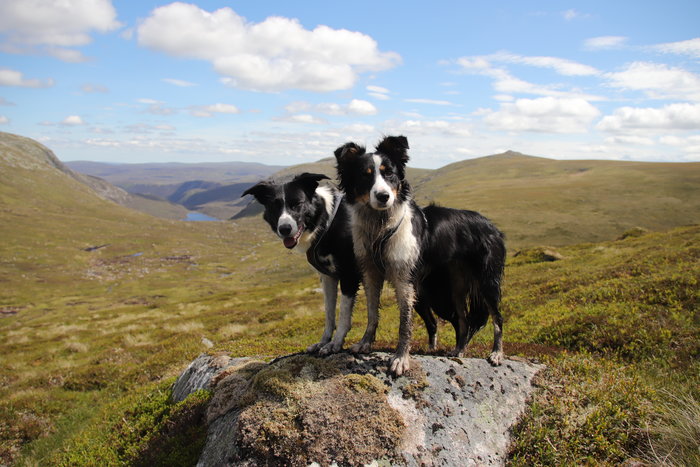 More posing, this time with Dubh Loch in the background 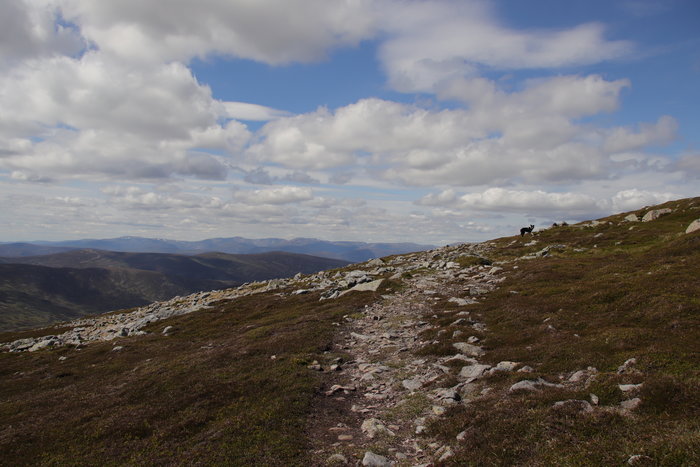 The clear bypass path around Carn an t-Sagairt Mor 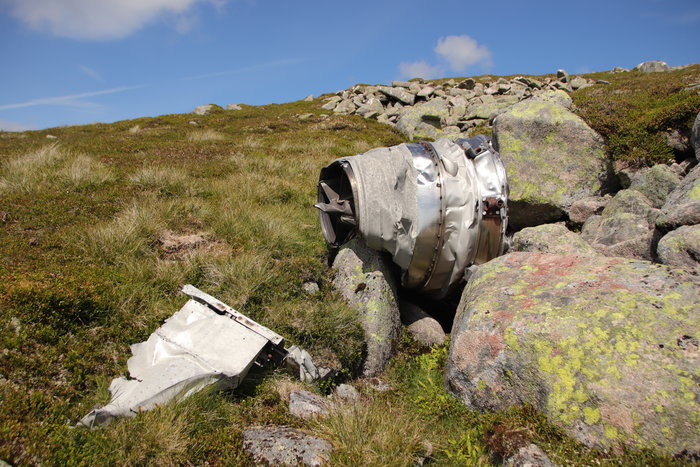 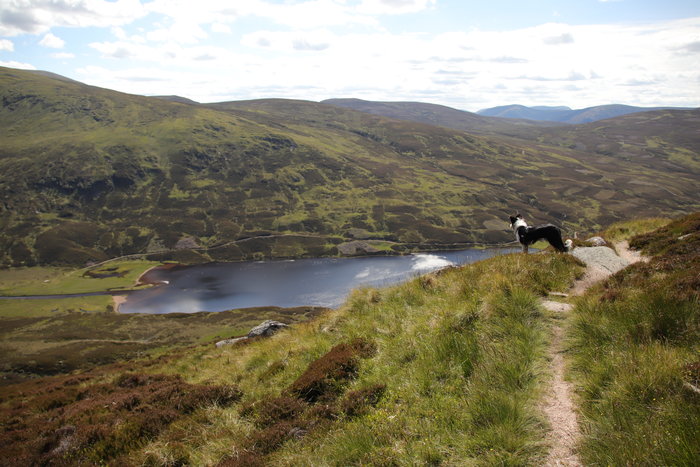 Looking down at Loch Callater from the good path up/down