Oh, dear, I’m struggling to write this one. Not because of anything in particular—we had a very good day, talking pretty much nonstop, since we’d not had a walk together in eons.

Selecting a route in these post-lockdown days is a challenge. The nearby hills are likely to be busy, especially the more popular ones, the roads are likely to be busy, as both daytrippers and staycationers start venturing further afield, and it’s not a given that all car parks are yet open. I’d thrown out a few suggestions to David, including heading south for some Donald bashing, but we picked this one, based mostly less in-the-car time, given that we’d both be driving all the way to the start point. He’d suggested that we park just below the dam, at the end of the access road through Brig o’ Turk, and that was a good call, saving us several kms at the end of a long day.

I left home around 6:30, allowing my usual extra time, most of which was eaten up by having to divert around the closed bridge (A811) at Balloch. Back on track, I then ended up behind a nervous Nellie all the way from Gartmore over the Duke’s Pass; he/they turned off at the Loch Katrine turnoff.

We’d planned an 8am start, but David was late (again

), so it was after 8:30 before we set off. Before we’d gone even a few steps, we saw the sign on the gate by the information board that said the Mell circuit—our route—was closed in upper Glen Finglas, due to landslips caused by heavy rain earlier in the year. We didn’t have a plan B. We decided, however, that there were various options available without going elsewhere: we could go up Glen Meann, and come back the same way, or we could go over Meall Cala, a Sim that David was hoping to bag anyway. So we carried on. We could soon see evidence of the landslips high on the hill. 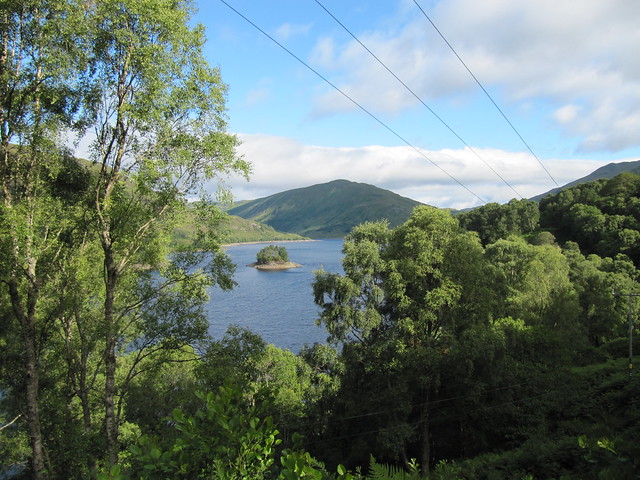 the reservoir through the trees (and power lines) 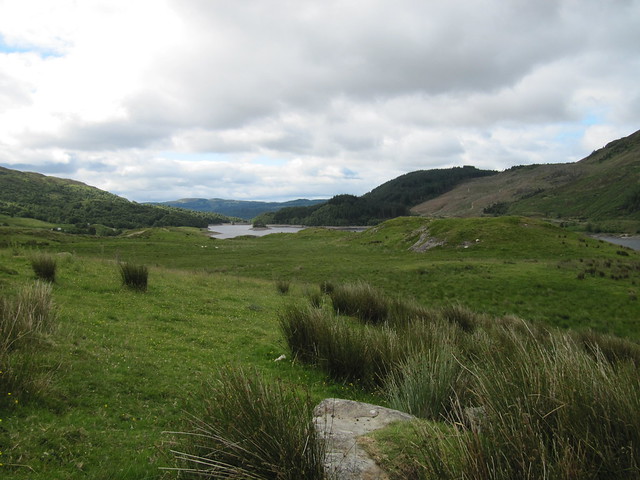 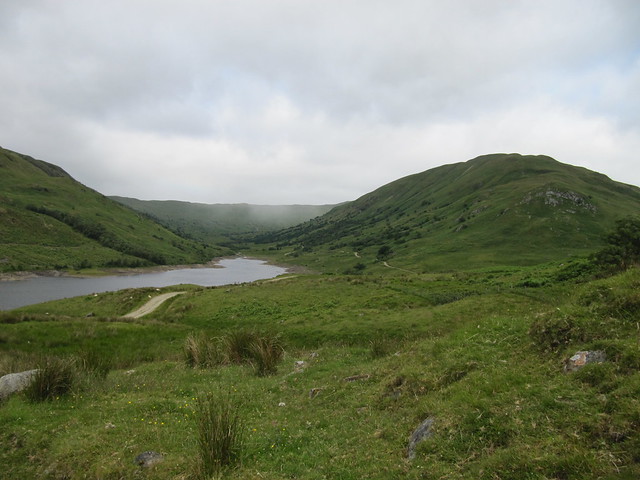 ...and ahead, to the end of the reservoir, and up Glen Finglas

When we reached the fork, I suggested that we continue carrying on up Glen Finglas to the damaged sections, to see if we could get through safely—if not, we could always turn back on ourselves. Not long after that, we met a MTB’er coming in our direction; he assured us that the track was passable, although there were short sections that were rough and muddy. Farm and/or heavy equipment had been through beforehand. So we carried on. 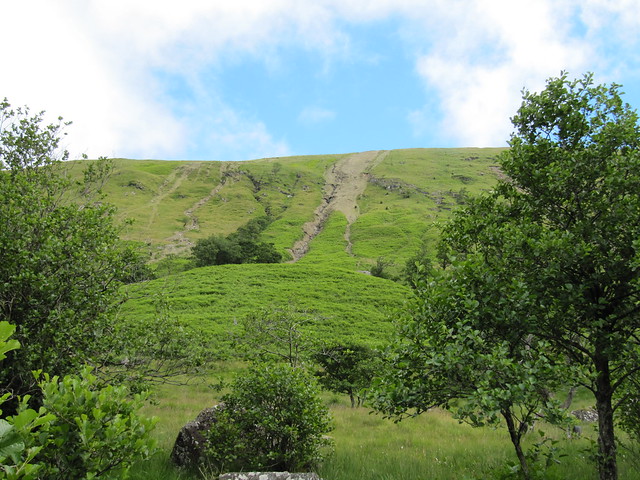 We—ok, I—had to stop often for breathers as we ascended. We took a short detour off the track to give some coos a wide berth, but they didnae seem bovvered by us. 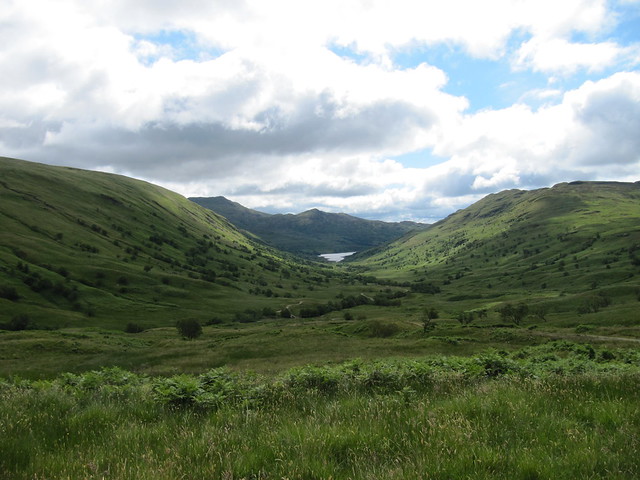 looking back down the length of Glen Finglas 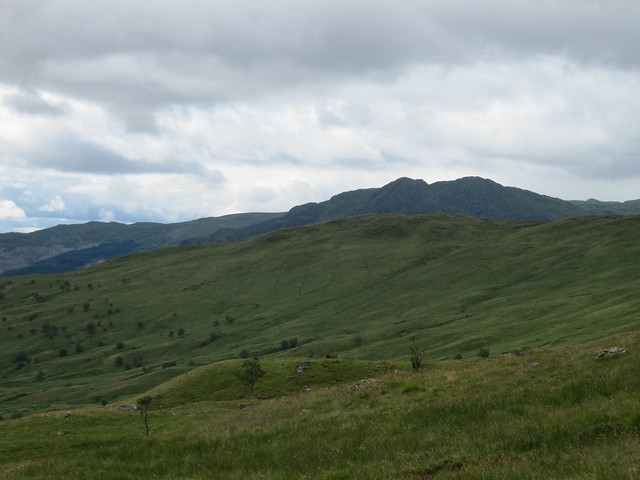 over to Ben Venue

We stopped at the cairn at the high point of the track to have some lunch, and decide whether to tackle the two Sims David had in his sights—Creagan nan Sgiath, about a km to the west, and Meall Cala, about 2km to the south. Looking across 2km of mostly peat bogs, it didn’t take David long to say he didn’t mind not bagging Meall Cala today.

It was a bit of up-and-downing to reach Creagan nan Sgiath, but it offered a nice view across to surrounding hills, as well as down over part of Loch Katrine. 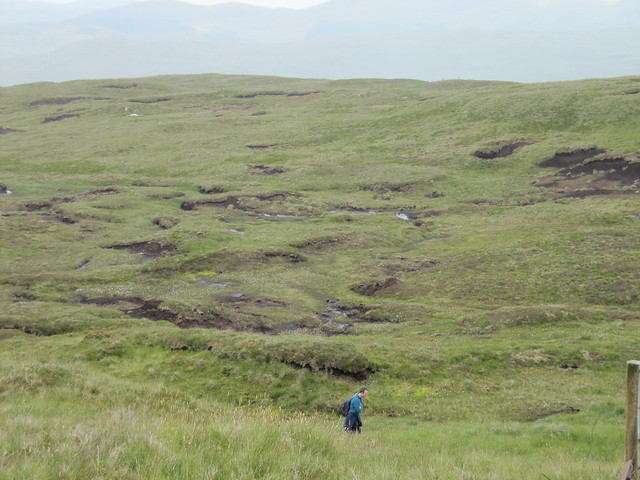 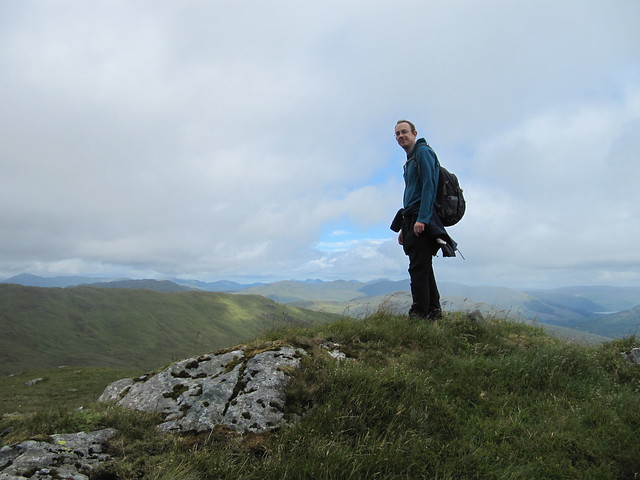 We retraced our steps back to the track, and started the long (mostly) descent down Glen Meann. 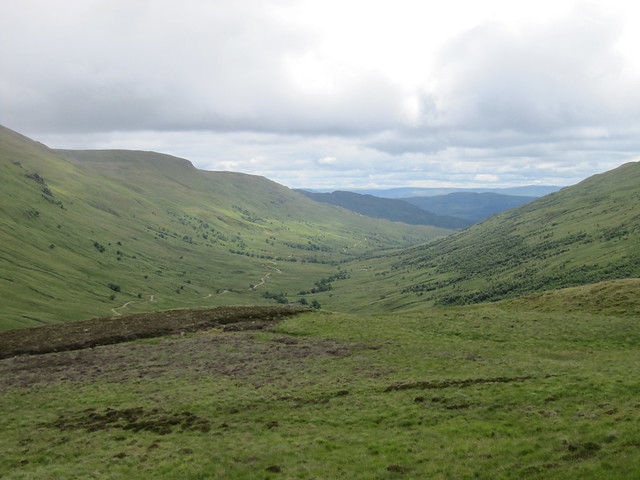 We were weary and footsore by the time we returned to the cars, but it had been a very satisfying outing—a full day, with enough ascent built in as some of the easier Munros, or certainly many Corbetts and/or Grahams, and far enough off the beaten paths to avoid the madding crowds. There were a few other walkers, and cyclists, probably more than we’d have seen in pre-Covid “normal” times, but certainly not enough to threaten the ability to socially distance.

It’s a brave new world. Time to start thinking about (and garnering mental strength for) the next outing.