Well I haven't written a report in almost 8 months, mainly for the fact that I've not climbed anything necessitating a report in all that time, really just climbing the odd already-well-documented marilyn or tump (the latter particularly during lock-down) but its good to see I can still bash one out when desired. Stob Odhar was well-deserving of a new report as JimboJim's two reports are now 6 and 7 years old respectively! Our caravan site in Argyll had just opened back up and it was high time I got around to climbing Knapdale's highest point. The parents were wanting to visit Ardrishaig so I got them to drop me off just below Erines 10 miles south, saying I'd be 2-2.5hrs - how wrong that was!

I started the walk by having to walk almost a kilometre just to the forestry track, which could have been completely avoided by some simple prior mapping. Eventually I reached the bridge where you can turn off and there's a 'CRLS' sign - follow these to get to the top of Meall Mòr. The forestry track followed the stunning Abhain Strathain briefly before curving steeply north. A landy passed by me who I later saw at the top of the hill. It was then some significant height gain up past where the forestry guys are likely staying, one of which had a caravan with possibly the most (in)appropriate name you could imagine. The wildflowers here were lovely - Selfheal, St. John's Wort and Tutsan (which I've learned doesn't appear to be invasive). After this the path continued a little more flatly before eventually reaching a fork where another landy was present - again follow the 'CRLS' sign. The track continued to climb gradually with an ever-increasing view. Eventually the ridge in question came into view, albeit not where I'd be walking. Track to the loch: Eventually the summit of Meall Mòr came into view again too, but it was still a good half hour away. In a sense I was glad to have the track but was also getting bored of the endless serpentining! The sun was out and it was pleasantly warm although I was sweating buckets. A bit before the Meall Mòr ascent, Stob Odhar finally came into view as well, unimpeded by conifers, as did more of Kintyre. 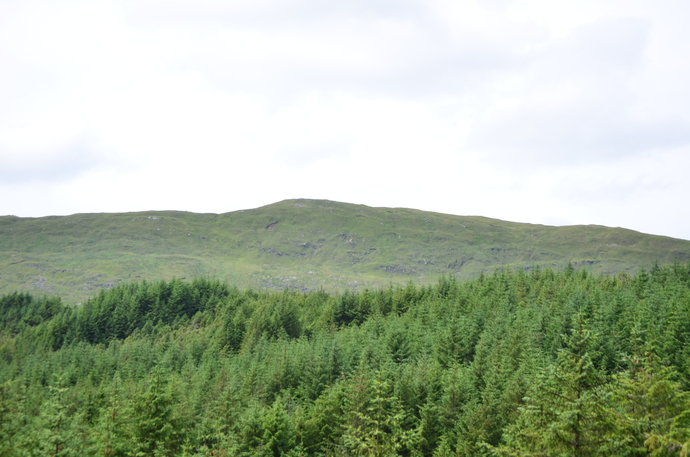 After one final bend and ascent I reached the hillwalk sign. I wasn't going to bother with Meall Mòr by this point as it had taken close to 1.5hrs from the drop-off to here and time was a little of the essence. I was surprised to find absolutely no human tracks at all despite the sign. Instead I jumped straight into the bog and got going - the terrain was pretty awful but was at least quite dry. I followed an ancient line of fenceposts down to a deer fence which was very difficult to negotiate as the wire was higher than the posts by a good couple of feet. After a fankle I was over and ascending the 10 minutes onto the ridge. Spotted a nice hind running off. Can you spot her?: Rest of ridge to the summit: This part of the ridge was much shapelier than I had expected and made for great walking with even some small scrambling opportunities. It was barely any time at all before I was at the trig but it had been 2.5hrs just to get there - a hard-fought marilyn if ever there was one! I was lucky to get some absolutely stunning views in all directions too.

Paps of Jura with Beinn an Oir mostly hidden behind Beinn Shiantaidh: The E Islay coast with (for exceptionally well-sighted readers) the Rinns of Islay in the background: Arran in all her glory: The south ridge from above: Loch Fyne and some Arrochar Alps (and maybe even more): Meall Mòr from above: Lochgilphead through the turbines: As usual, I didn't hang about long at all - some pictures and I was off. This time though I decided to go back along the full ridge which was well worth it.

Rest of north ridge from its shapeliest point: After some more sweating and careful descending I was back to the bogginess. I followed a sightline of two quartz rocks up to the track and began the long walk (run) back. My cardio is appalling at the minute so even with frequent bursts of jogging it was just under and hour back to the road. Other than the guy in the landy, I didn't see anyone on the whole walk. The parents were waiting, parked, at a passing place, having managed to keep themselves busy for the 2 hours' time later than I'd said I'd be! That's all of Knapdale's marilyns bagged now! Kintyre next?

Think I'll be returning to your report at some point, as I still have the sub 2000s in this area to do.

They might be small hills, but some great views by the looks of it.

PeteR wrote:Think I'll be returning to your report at some point, as I still have the sub 2000s in this area to do.

They might be small hills, but some great views by the looks of it.

Aye great views Pete - I'd recommend Cnoc Reamhar - a bit of a hassle to get to but stunning in my estimation!

I like the look of that - almost went up it when I was working down there a few years ago but didn't have time. I'm sure I'll be back that way at some point.

malky_c wrote:I like the look of that - almost went up it when I was working down there a few years ago but didn't have time. I'm sure I'll be back that way at some point.

A decent-sized day out! Can't believe my ascent was the height of a Munro