Aaaahhh, the freedom of hillwalking. We never appreciated it enough until it was taken away from us for the best part of spring and nearly half the summer. But now, travel restrictions are no more and what does that mean for Black Panther? It means NO MORE TUMPS but some proper mountains! Munros! Corbetts! Grahams! High summits! Ridge traverses! Meowing on top of summit cairns! Yuppieeeee!

The last few weeks of lockdown felt pretty tough. I was mentally spent, depressed and tired. Every time I saw or heard the stay home message, I was ready to bang my head against the wall. I guess many of you felt the same way. And I thought I was the lucky one, having the Beauly ridge on my doorstep...

Kevin had holidays booked for the first week of July but our original plans (wildcamping in Knoydart) had to be adjusted to what was allowed and what was, simply speaking, practical. One day trips to hills seemed the best option. Additionally, Kevin's old knee injury has returned and he was also suffering from mild asthma, so I wasn't sure how much he was capable of doing. We started with a few easier walks (a Sub and two Corbetts) which I will describe later. I decided, I'm not going to post my post-lockdown TR's in chronological order, but they will all definitely appear on WH at some point in time.

I didn't want to push Kevin into deep waters of, let's say, the Mullardoch round, but a visit to a single Munro via a new route sounded great. The idea of approaching the Boggy Peak via its south ridge came from the inspiring Dogplodder's report and in my case, once the seed is planted in my head, it will eventually bear fruit, even if the final delivery is very painful

We walked the whole Mullardoch ridge in 2013 (my old TR here), but I was always intrigued by the south ridge of Sgurr na Lapaich and the multiple options it presents for a determined hillwalker. We considered several options, one of them including Carn nan Gobhar, another one descending via Creag a'Chaorainn, but in the end we had to settle for the descent route along Allt Taige, as Kevin's knee went on strike and he was limping all the way down, poor old man. I even found him a new nickname...

So if the 9 hours time of this walk makes you raise your eyebrow, bear in mind, it's time achieved by Herr Flick and Helga

Track_LAPAICH 21.1KM.gpx Open full screen  NB: Walkhighlands is not responsible for the accuracy of gpx files in users posts
Generally the whole route is WET, especially the lower reaches of the south ridge, below Mullach a'Ghlass Thuill but what else could we possibly expect? It's Sgurr na Lapaich after all!
We started from Mullardoch Dam, where we grabbed the last free spot for parking!

Peace and tranquility of Loch Mullardoch:

2020-07-08 sgurr na lapaich 011 by Kevin Dalziel, on Flickr
Since our previous visit, a new hydro scheme was built on Allt Mullardoch and a comfortable track leads to the bottom of Mullach na Maoile: We took the upper ATV track contouring around Mullach na Maoile and honestly, I hated every second walking on this horrible mushy-tatties surface, but I kept my spirits high just looking at the enormous ridge in front of us, thinking "once on the high ground, it will be dry!". I actually managed to convince myself that the splodgathon was only a temporary inconvenience. I forgot it was THE BOGGY PEAK we were tackling

We left the squelchy track eventually and aimed for Allt Taige, looking for a suitable river crossing. There is a bridge higher up (not marked on maps) but we wanted to gain access to the lower slopes of Mullach a'Ghlass Thuill: We found a good place at 420m, between the two waterfalls: Don't stop me now! I'm having such a good time! Posing with Carn nan Gabhar behind: 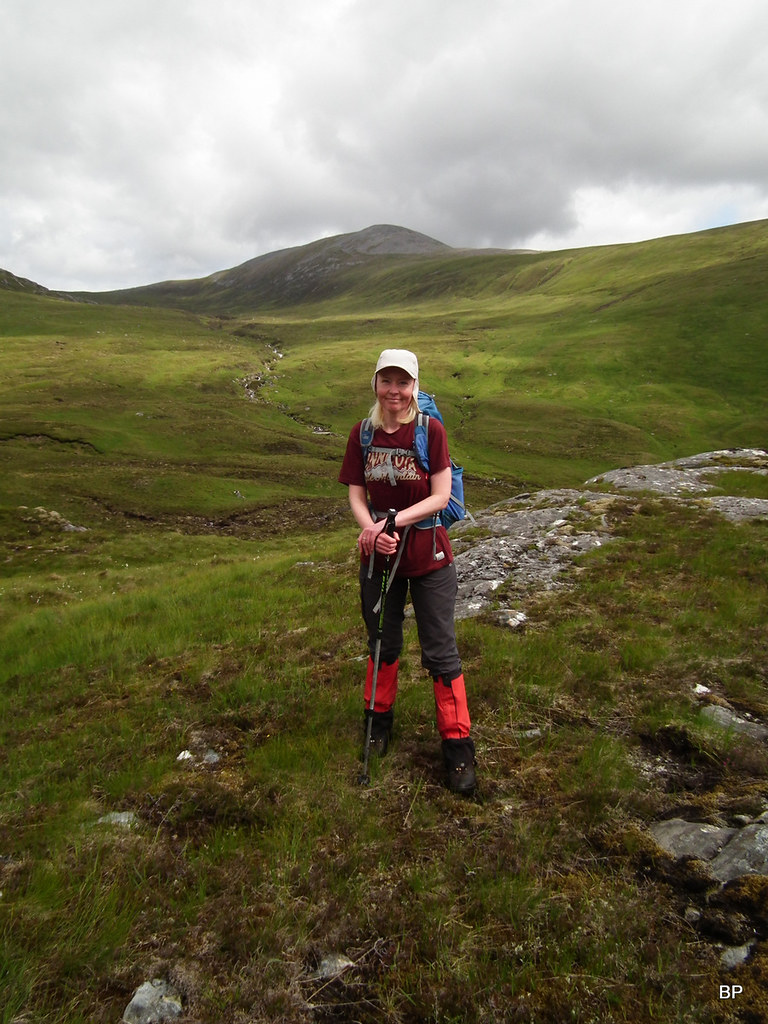 2020-07-08 sgurr na lapaich 024 by Kevin Dalziel, on Flickr
Kevin said his knee was sending him warnings already, so we slowed down. Even if it was going to take us the whole day to walk one ridge, so be it. It was about enjoying the moment, not about statistics!

As soon as we hit the ridge, the ground became a bit drier and more grassy, so easier going. What lay in front of us was still unknown though it looked mouth-watering: A small herd of mountain goats watched us from the distance, probably wondering who the heck are these two weird creatures and why are they trampling our grass

By the time we reached Mullach a'Ghlass Thuill (792m) it was already midday. We knew we were slow today but didn't really care, so stopped for lunch now rather than on the summit. We needed the fuel!
The ridge continues and from now on, thank heavens, its dry underfoot and no more peat hags! From Braigh a'Choire Bhig it's only a short climb to Sgurr nan Clachan Geala. Kevin preferred to contour around the western side of this top, as he said "saving his knee for the painful descent". Having had problems with my knees in the past, I had to admit, I understood his concerns...
The corrie surrounding Loch Tuill Bhearnach is not named on OS maps but it doesn't stop it from being one of the most breathtaking views I've seen so far this year. A view like that after months of looking at boring heathery lumps nearly took my breath away:

Our final destination to the left of this pano: Sgurr na Lapaich!

Kevin took time on the final stretch and I didn't hurry him to the summit. We saw other walkers on the ridge above us but by the time we reached the summit cairn, they were gone. At least Lucy could pose on the top without any silly comments from third parties I guess I don't need to say that Sgurr na Lapaich is a great viewpoint, being the highest top on the whole ridge. Having rested his knee for a minute, Kevin grabbed his camera: Loch Monar and the hills beyond:

Even more distant Isle of Skye:

Looking back to the south ridge:

The descent route took us down the main traverse path between Sgurr na Lapaich and Carn nan Gobhar. We planned to descend to Loch Tuill Bhearnach and then follow the river down Glas Toll, to join the wet ATV track we used on the initial approach. It all looked easy on the map but with Herr Flick as my companion, I was now feeling more like Helga in her high heels

The terrain directly below the summit is not Herr Flick friendly at all! We took the wrong line of descent of course and ended up having to hop over big boulders. This exercise was tricky for Kevin, so I went first, finding the easiest line of walking. Typical us: making things more difficult for ourselves albeit not deliberately! Once we located the path below, we found out it was quite steep an eroded and that again gave Kevin a bad headache, when he limped carefully down the slippery slope...
Come on, honey, it's not THAT bad! Lower down we encountered more rocky terrain. Something, that in normal circumstances would be hopped over without any problems, but as we were now Herr Flick and Helga in her high heels...
The bouldery section in retrospective: Helga resting on a patch of snow Herr Flick on the path to the bealach: It was a real relief to reach less steep ground. Once on the bealach, Kevin's mood improved and he even took time to take some panoramic snaps of Loch Tuill Bhearnach and the surrounding cliffs:

The descent along the river was pathless and peat-haggy to begin with, but later we picked a faint path following Allt Taige. Kevin was less Herr Flick and more himself now, ready to tackle all the obstacles: Following the path along the river: Lower down we stopped to admire and photograph some picturesque waterfalls (part of the southern ridge in the background): We met many wee locals on the way down. Lizards and frogs were aplenty...

...as were midges, but luckily we had repellent to keep them away. As we picked the ATV track again, it started raining quite heavily and the shower followed us for about half an hour, but it did stop eventually and we finished our south ridge adventure with big smiles. Kevin's knee was hurting and we were dead-tired, but what a day it was. The south ridge of Sgurr na Lapaich is a real cracker! Sometimes it's worth to take a path less traveled, to see the more interesting side of the mountain. Even if we were forced to turn into Herr Flick and Helga in her high heels... well, at least it's a walk we will never forget!

There is of course more to come from me: Munros, Corbetts, Grahams and crash sites, so watch this space

The meowing one is back!