Our post-lockdown strategy was to re-visit hills we had climbed in the past using new routes. Beinn Loinne was one of such mountains. We had done it a couple of times as a winter walk, accessing the summit from the west, where a good track can be followed half way up. But I remembered there was a different approach to this Corbett, much wilder and more challenging, from the south-east, starting from A 87 near Loyne Dam.

Several reports on WH describe different variations of the eastern route. I remembered that Nigel and Hugh did an east to west traverse (from Loch Loyne to Cluanie Inn) during the summer WH Meet last year, but they had two cars, we needed to return to our starting point. So it was good old Malky's route we used (we have actually followed several of his routes recently, not always successfully

). His TR was a decade old, but not much has changed since his visit to the area. Still the same locked gate at the start and the same wet-ish track on the initial approach. And the idea of traversing the whole length of the ridge, including some steep, bouldery terrain on Druim na Garbh-leitir... turned our walk into a fantastic post-lockdown adventure. We were much slower because we didn't use bikes, but on the other hand, we were more lucky with views, ha!

Track_BEINN LOINNE20,2KM.gpx Open full screen  NB: Walkhighlands is not responsible for the accuracy of gpx files in users posts
*our GPS had a bad day and didn't kick in for the first mile or so

There is space for a car or two at the start of this walk, by a large locked gate. In case there is no room, one can park in a large layby about 300m north along the A87. 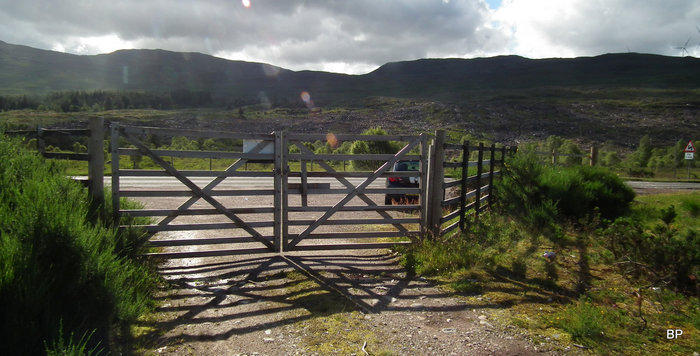 The gate was locked but easy to climb over, no barb wires anywhere. We geared up and started walking up the track, through a lovely pine forest: 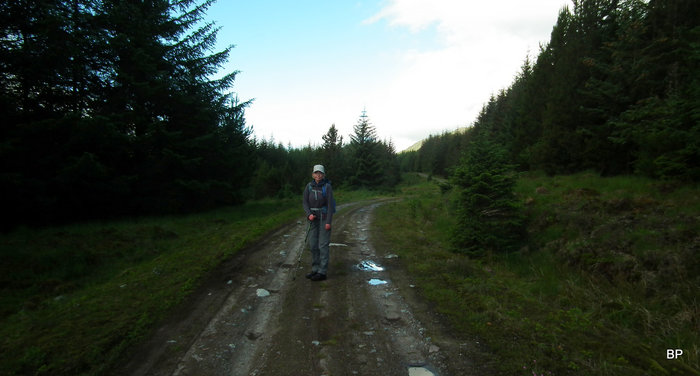 Out of the first plantation, through another gate (this one not locked), we found ourselves facing the great view along Loch Loyne: The track continues to the second gate and through another plantation, but we decided to take a shortcut to the eastern end of the ridge. I spotted a wet ATV track heading straight up:

The track was boggy so soon we abandoned it for simply marching across the grassy meadow towards the steeper terrain. Good views to the eastern end of Loch Loyne behind us: 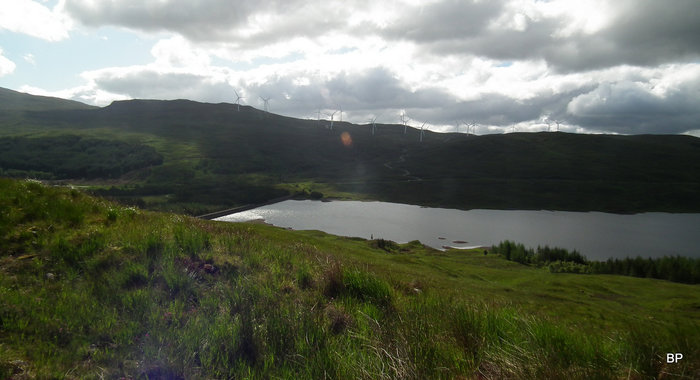 What started as an easy stroll, ended up as balancing on slippery terrain on the very steep slope we picked for the direct ascent. The ground was waterlogged after several days of rain so we had to carefully pick our line of ascent and were reduced to grabbing heather branches for balance from time to time

But we didn't mind, for the first time in months we felt like doing some proper hillwalking in the wilderness, with all the blessings of it 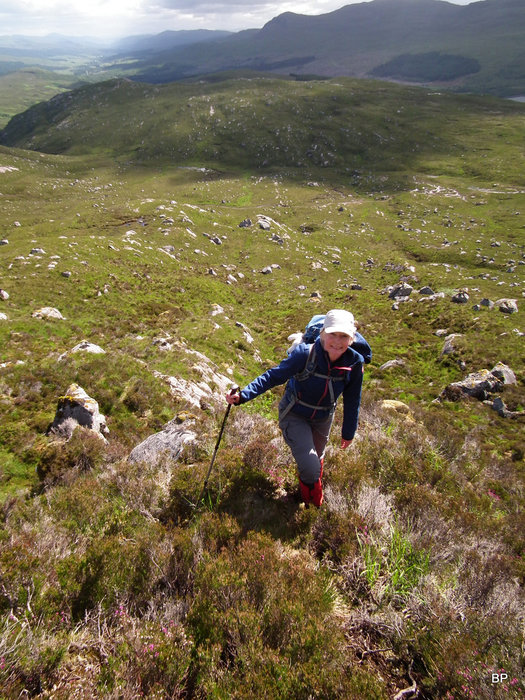 Higher up there were rocks and boulders in abundance, ideal for fun and games in dry conditions, but we wanted to concentrate on reaching the summit rather than rockhopping! 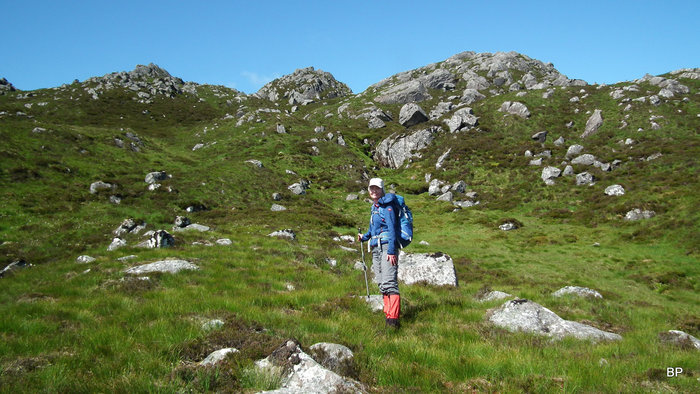 Looking south from between the boulders of Druim na Garbh-leitir to Loch Lochy Munros and Ben Tee: 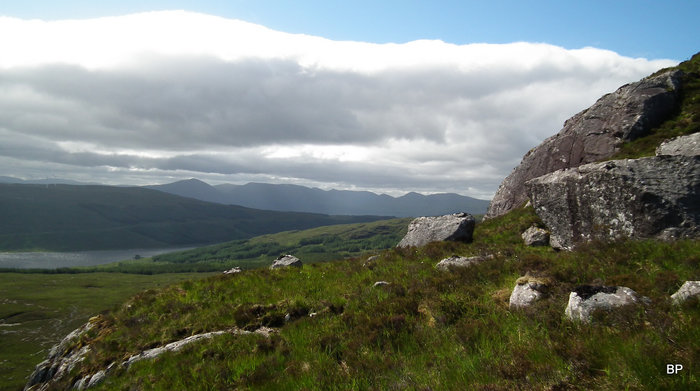 View due east along Glen Moriston: At 600m or so, the angle eases off but the landscape is still very bouldery...

...which was fine by me as I could clamber up every possible rocky outcrop and meow as much as I wanted! Nobody could hear me here anyway

On the way to the first marked top, we admired the superb vistas in all dircetions, especially down to Loch Cluanie: 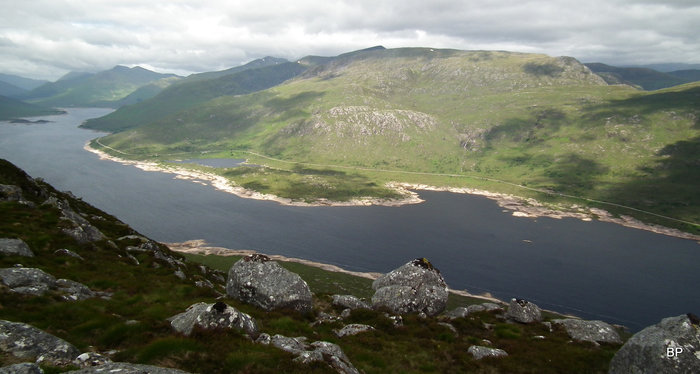 Cluanie Dam and the eastern end of Loch Cluanie:

We still had a long way to go to reach the summit (the more distant peak in the photo below):

We strolled along the edge of the northern cliffs, taking photos and looking for a good spot for a break. I simply couldn't take my eyes of the great view west, the peaks of Glen Shiel framing the blue loch below:

The eastern part of Beinn Loinne ridge has two TUMPs (748 and 775m, respectively), the lower one, named Beinn Loinne East Top, is marked with only a tiny cairn:

The middle top (also called Beinn Loinne to double the confusion) has a much bigger cairn, from here we could see it was still a long distance to go to the true summit... But we had more than enough time plus walking in such surroundings can hardly be a tough job

Weather was capricious today and on the ridge we had to wrap ourselves in warm layers, wear hats and gloves, it was quite cold! Hard to believe we were in the middle of summer! Well, it's a Scottish summer so what could we expect???
Kevin well wrapped up: 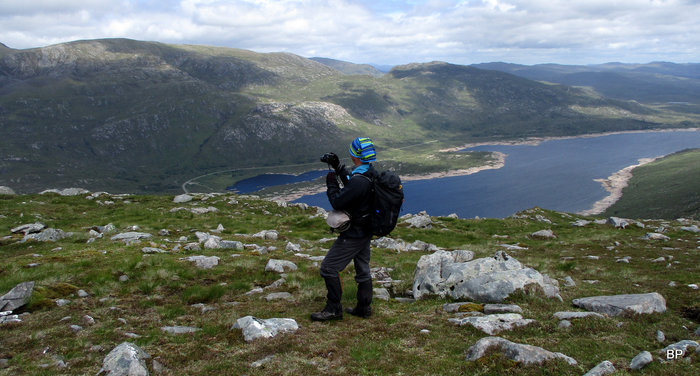 The final traverse required dropping about 100m to a wide bealach, hopping over several peat hags and the final climb up to the trig point. It felt weird to approach it from this side, we always climbed Beinn Loinne from the other direction

Looking back to the ridge we just walked: 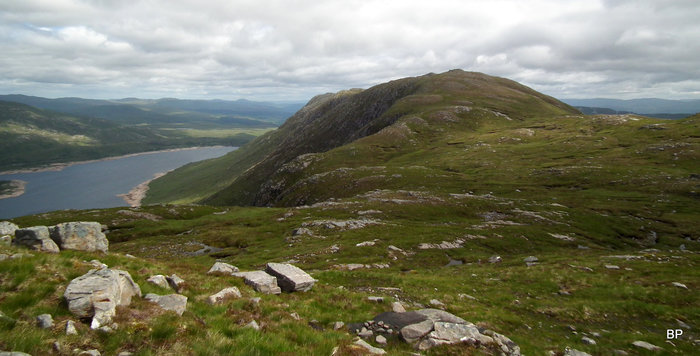 Kevin approaching the trig point from the wrong side Not a new summit but a new route, great to do something different

To return to the track, we descended the southern side of Beinn Loinne, aiming for the upper end of Allt Coire na Creadha. The ground here was quite wet and peat-haggy and Kevin started complaining about pains and aches in his knee. Not a type of terrain I'd recommend for winter or early spring time, though it doesn't look too bad in pictures. 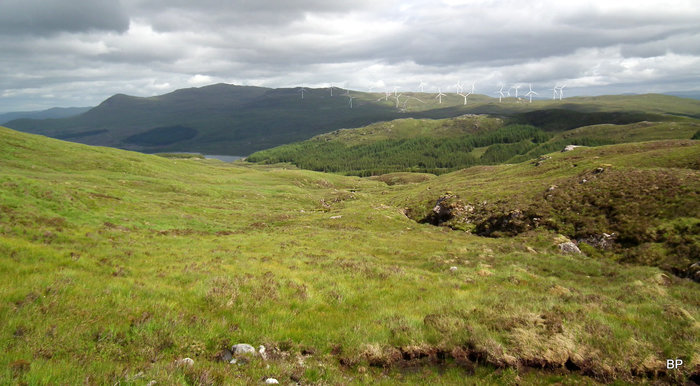 We intended to pick the track by the small lochan at 350m. In his report, Malcolm mentioned something about climbing a deer fence here, so we were mentally ready for it, but thankfully, we were spared the effort, as Kevin spotted a wooden gate! Yeah, no fence climbing this time! 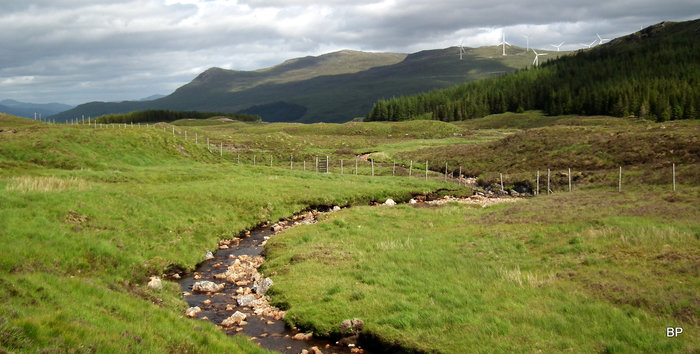 The gate was stuck in a precarious position, there was just about enough space for us to squeeze through, and on the other side - another 300m of hardcore peat hag hopping, before we reached the lochan and the end of the track. Weather has improved in the afternoon and the sun was now baking us alive. I was fed up with my gaiters: 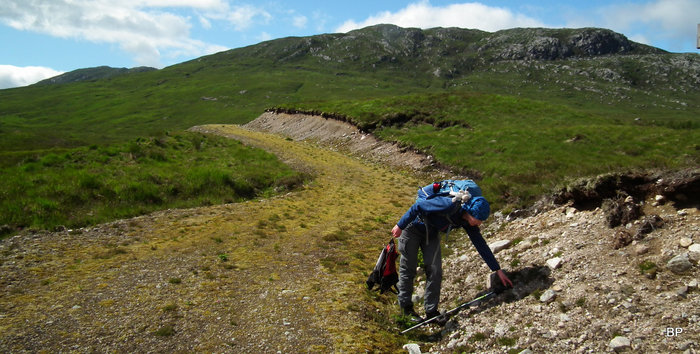 The rest of the return route was now much easier. About half way through the first plantation, we had a strange encounter of the deer kind. We met a young male deer, grazing on the track. He was absolutely adorable and didn't show any fear of people. He actually walked towards us, tilting his head and looking at us curiously, as if he wanted to say:
Who are you, strange creatures on two legs? 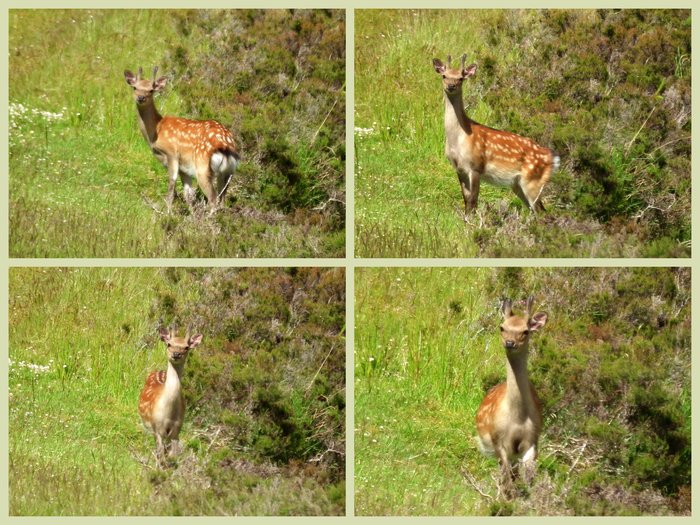 He had a good look at us, posed for several photos, then lost interest in us and simply turned around to disappear in the forest. Maybe he had never seen people before, this side of Beinn Loinne is rarely visited as the easier western approach is simply too tempting for most.
But there is something special about paths less traveled and we really enjoyed eastern ridge of Beinn Loinne, despite the usual distractions in the shape of peat hags and boggy moorland. So good to be out and about again!
Walking back to the car: