A late start for me today as it was 4pm before I started off, normally I like to set off early so this was a bit different.

Aberdeenshire was forecast to be the warmest part of Britain yesterday and it was certainly a hot start but there was a good breeze blowing.

I parked by the monument in Tarland and there was loads of parking available in the square.

The first couple of miles is on tarmac, initially flat then on an easy ascent. On leaving Tarland there was a community garden on my left then there are just open fields to either side of the road. View from the road of what lies ahead After taking the right fork and heading up towards West Davoch the road starts to climb but still an easy gradient to get the legs going before the climb steepens.

Just beyond the left hand turn for West Davoch I left the road behind and picked up a track heading for Boultenstone. This is where the black cloud descend as the next photo illustrates. As the photo shows - the start of the black cloud

I was now sheltered from the wind by the tree line and this is where the flies were lying in wait for me and boy they were there in their numbers. I can't remember a walk where there have been so many of the little *******. OK, it's not midgies and it's not clegs but when they are in their hundreds buzzing your head and you can feel them in your hair and landing on your lips, eye lids, ears, nose etc it's really annoying. The track now getting a little steeper Heading in to the trees on a good grassy path

The surprise was that when I actually entered the woods through a wooden gate and picked up a good grassy track the fly problem eased until I was about 50 yards away from leaving the woods behind. View of Morven from the woods

Whilst in the woods a few clegs thought they would join the party but I think I got to them before they did the deed and there were only three or four.

The path took a fairly straight route uphill through the wood before taking a right turn and heading towards the open moorland and in the last few yards the black cloud descended again and stayed with me till I was on top of the ridge where the wind did it's job and dispersed the crowd.

After leaving the woods through a wooden gate there was a short climb on a narrow track to reach the wide ridge that I would now follow all the way to Pressendye.

By now the views were terrific in all directions. 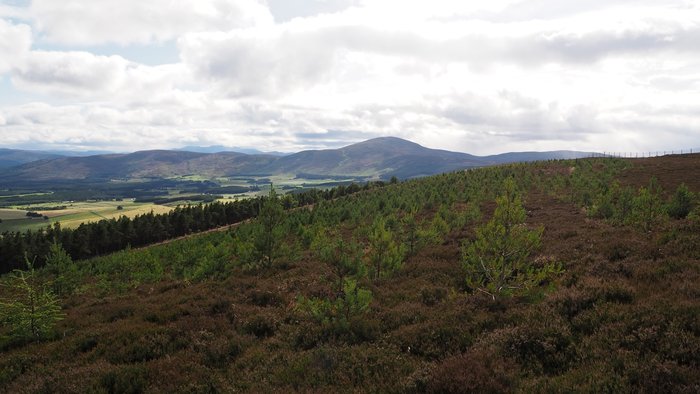 The path took me past Broom Hill following the line of a fence to my left and after Broom Hill the path descended down to a small lochan before ascending initially quite steeply on to Pressendye. The climb looked harder from a distance and didn't actually take that long with an easy gradient for the last few hundred yards to the top.

I always love walking in Aberdeenshire, the scenery is terrific and last night with the patchwork fields in sunlight below me it was brilliant to just stop and taken in the 360 views from the top of Pressendye. A shower of rain just to the north west I took shelter from the wind for a quick sandwich and some Jaffa Cakes before picking up the main track heading south east and down off the hill. Looking south before entering the trees Back on lower ground and in the trees Looking back up to Pressendye

After following the WH report and the blue route marker posts I think I went wrong about a mile from the finish of the walk. I had passed a wooden hut on my left and then within a few yards veered off slightly to the left on a narrow grassy track rather than the main and more obvious track heading straight on (as per WH). This narrow track took me through the woods close to some fields and then I noticed the tree lined path to my right heading between the fields and down to a small solar panel farm. The blue markers were pointing me straight on and initially I did carry on for a couple of hundred yards but then doubled back on my self and took the track down to the solar panels. On reflection, I should have stayed with the blue markers. There were no problems with my route, I came out on a tarmac road just above Douneside House and Health Club and just followed the road down and in to Tarland. Below Douneside House there was another tree lined path came out at the roadside and I get the feeling this is where I should have exited on to the road. All that was left now was to follow a good grassy track down in to Tarland and within a few minutes I was back at the car. Despite the "black cloud" problem this was a really enjoyable walk and there are great views along the broad ridge and from Pressendye itself. Not sure why it's taken me so long to get round to doing this hill as it's been on my mind for 3 or 4 years now.

Re: Pressendye and The Black Cloud

It is a surprisingly fine hill for its views but I can imagine the flies would not add to the enjoyment. Good that you got an occasional breeze though to help keep them off.

Re: Pressendye and The Black Cloud

Bearing in mind the reported crowds elsewhere I had the place completely to myself on a beautiful late afternoon/early evening.

This hill had been on my radar for a while now, not sure why it took me so long to get round to it as it's only an hour and a quarter up the road.