I've climbed to Beinn Dearg (the original top) twice before but on each occasion a cold biting wind dissuaded me from continuing to the "new" top apparently half a metre higher. why don't they just build a bigger cairn on the old one?

Slogging up Glen Goinean is not much fun at the best of times: It is wet and vegetated and the footpath shown on the 1:25k map is pretty well non existent, so I thought I would explore the tracks that climb above it in the recently felled woods below Mor Bheinn. The woods above Dundurn: The tracks on the L might provide a way to Mor Bheinn, but the one heading south that I was interested in Detail
The standard way to go would be to follow the cycle path from St. Fillans to Dundurn and then head R up the track, but a bit of research suggested in a feasible alternative. I followed the WH route to St. Fillans mount https://www.walkhighlands.co.uk/perthshire/dundurn.shtml Cows in the field around St. Fillans chapel In the field below the mount - Beinn Dearg at the back Heading on South through this field, a hole at the end of the wall leads to this gate You come to an abrupt halt at a dam: it might be possible to cross here, there is a ladder down and stemples on the other side Above the dam the burn is enclosed by a gorge: you can climb steeply up the slopes above on the R and cross the burn higher up, but then you are outside the deer fence It is much easier to cross lower down, when a large hole at the corner of the fence ( badgers?) lets you make a short steep climb up beside it
EDIT May 2021 amazingly someone has discovered this hole and plugged it Another hole under the fence and lots of tracks - badgers surely You come out with the track in sight: there is a short easy section of brash and then you are there - I'd taken about 50 minutes Looking back over the woods to st. Fillans and the Girron Along the track - the ridge of Am Bioran Beinn Dearg and the grassy ridge that leads up to it Zoomed - Ben Vorlich at the back
The forestry tracks shown on maps can be innacurate as they are change frequently, but this case it's spot on. At the junction I went Right but it soon ended at a watch tower Stalaglüft - maybe the area ahead is mined Beyond - a wasteland - I could see the hill but ....
Looking back from the summit later I probably should have pushed on here and crossed the deer fence: but these days I am a bit nervous of them: I tend to teeter on the top and there is always the risk of catching a boot clip on the wire

and hanging upsidedown, having to reach up to unlace your boot and free your foot I climbed the fence where there were wooden slats, crossed the (new) track and headed up to the grassy ridge Like the ridge of Am Bioran this undulates with a number of flat "landings": looking up towards the top Looking back to the woods - the "watchtower" is at the bottom L
The ridge climbs around 400m to the 705m cairn, but it seemed a lot longer this time

Soon after arriving I was joined by a party of four who had already done Mor Bheinn and were continuing to the Western top, but they were parked in Glen Artney - probably the best starting point for this hill. My original (rather ambitious) plan had been to traverse the ridge, descend into the head of Stille a' Ghlinne and then over the col into the Fin Glen that I know well - it has a track right down it

. However, I was way behind schedule, feeling a bit knackered and again there was a howling gale blowing from the west, so I descended the grassy northern slopes to the track and followed it back into the felled forest 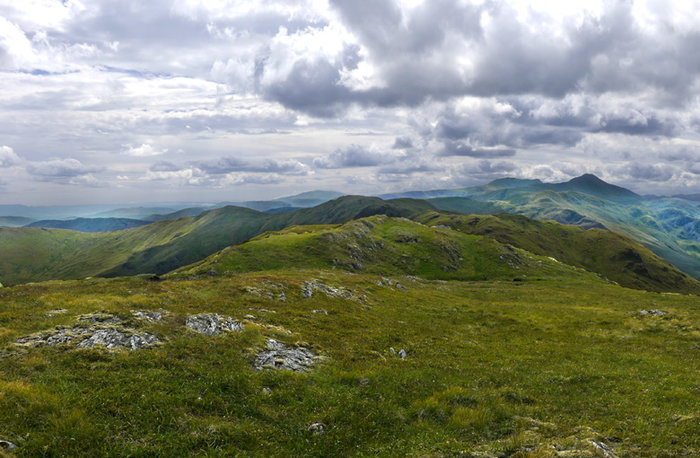 Looking west along the ridge from the Eastern top 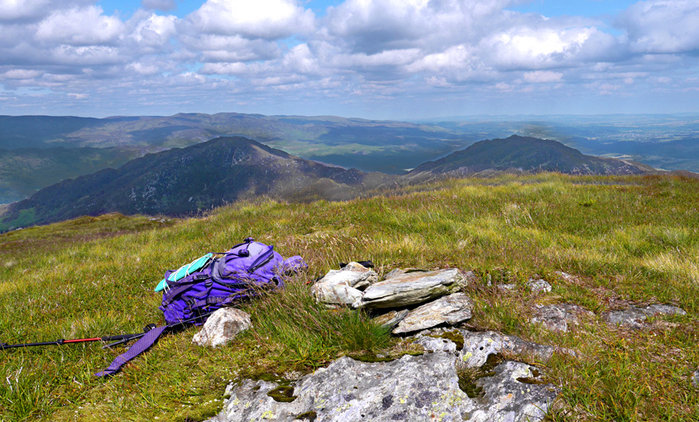 On the northern slopes - mountain pansies and yellow mountain saxifrage
The track exits the forest close to the junction of the burns - by a locked wire mesh gate. So it was over the fence beside it - but I was able to use the top of the gate to steady me. I crossed the burn, refilled my water bottle and rested for a while.
It's around 25 years since I was in the Highlands at this time of year - I'm normally in Switzerland - and I'd forgotten how lush the vegetation is - particularly at lower altitudes. Then floor of the glen was very wet and full of knee deep grass, but there were several tracks where deer had walked and following these I made good progress until I hit the bracken

it covered the whole width of the glen.

To start with it was waist deep and I could easily follow the deer tracks through it, but as I descended, it deepened and eventually reached above my head. There were still tracks but it was easy to lose them when I just had to push on slowly until I could see where to head next. I fell over a number of times, but using poles you "subside" rather than crash to the ground

I guess I was in the bracken for well over an hour, but all good things come to an end

and eventually I came out at a grassy col from which I could negotiate a bracken- free route down the final steep slope (it's another hanging valley) to the gate that I'd come though at the start.
As I mentioned at the beginning I'm not a fan of this glen at the best of times, but at this time of year it's a complete NO NO