After much debate, we decided to upgrade from Corbetts and Grahams to our first family Munro walk. Glen Affric is only an hours drive from Inverness, so not too far from home but still far enough away to give some fairly spectacular views and a sense of remoteness. So we settled on the Toll Creagach and Tom a'Choinich summits, so not just one, but two Munros for our firsts!

We were very lucky with the weather forecast

, dry all day with patches of sunshine coming through, and the rain had not been too prolific leading up to the walk. We parked in the relatively new car park that has a path leading to the old hill path. The hill path has been upgraded a little up to the point of a new mini dam, potentially being used as a power and water source for the eco-friendly loos at the far end car park below. Once past the dam, you are into bog central. As the weather had been kind leading up to this day, the path was relatively dry, with just a few boggy patches and the burns were easily crossed. I imagine that you would need gaiters (or a snorkel) if the leadup had been wet.

The path up the glen forks off to either Carn Eighe to the left (straight on through the glen), or uphill to our route on the right. The path is fairly easy to follow all the way up. View from the upward crag looking back towards the car park Daughter looking back longingly at the car

About halfway up it starts to get rocky and requiring a bit of scrambling, a first for my two munchkins. There were often multiple possible routes but most seemed to return to the communal path eventually as many spots just had one route through. The lungs were bursting

by the time we crested the path onto the vast plateau leading to the summit at the top. False summits are a killer! The plateau leading to the summit of Tom a'Choinich

We finally made the first summit of Tom a'Choinich 4 hours after leaving the car. The winds were pretty wild at the top and colder than expected but we were well prepared with jackets and windproofs. We quickly began the descent to Bealach Toll Easa, an unnamed Munro that sits in between the two. Very quickly it was apparent my son was experiencing an episode of vertigo and everything came to a halt.

The path we described as the walkers Bealach na Ba. It zig-zagged down to reduce the steepness of the descent but the drop on the side was pretty epic. My husband eventually managed to talk him down a bit until he was attempting to 'Parkour' the rest of the descent. We stopped for a refuel in the lowest dip and contemplated heading downhill at the path that was offered to us there. We decided to press on to the second summit as we had seen it was more dome than crag and less risk of more vertigo!

Another one of those sneaky false summits came upon us and released the view of the actual summit, still a fair distance away. We had veered off to the right of the path as it isn't very well defined so had to scramble sideways to return to the path to the summit. It was so worth the effort. The views over Loch Mullardoch and the mountains to the west were second to none. It was absolutely stunning. 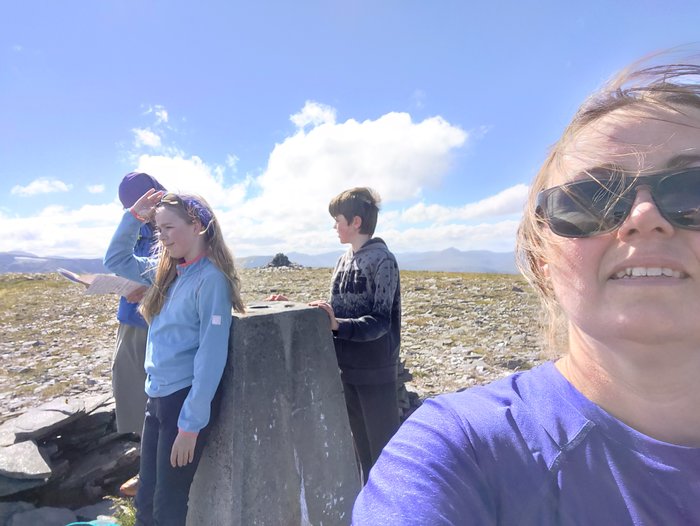 The team at Toll Creagach Summit We took the advice of the WH route description and just headed south off the hill but I think if I was doing it again, I would head back to the dip between the two and head down the better worn path that comes up the Allt Toll Easa waterfall. We were lucky it was dry and didn't get our feet too wet, but in wet conditions, even wellies wouldn't help. There are a lot of hidden holes in the heather which resulted in someone disappearing up to their knee on 6 separate occasions between 4 of us on the descent.

I am very glad we did the route the direction as suggested by WH. I think the steepness of the ascent along the crag is easier to start with than to descend at the end of the route, particularly if your muscles are more used to sitting behind a desk than walking Munros!

Once we returned to the path at the bottom, we trudged on to the small dam again, stopped for a sugar boost to get us back to the car and then headed off. The trees of Glen Affric never cease to leave me in awe. The history that these majestic beings could tell us would be fascinating. Looking back up the path to the car, at Tom a'Choinich The majestic trees of Glen Affric

activity_5251932704.gpx Open full screen  NB: Walkhighlands is not responsible for the accuracy of gpx files in users posts

Lovely photos and a fine route for a first outing on your Munro journey.