Well i've seen better weather forecasts, but looked like wind was my only thing to worry about with possible flashes of sun and blue skies. So off to the cairnwell pass for me.

Bit of a bad start to the day with my mate with the hairdo (Mark) cancelling 20 minutes before i left to pick him up, think he had a severe case of lazyinmybedcantbebothereditis.

Left full details of my walk route and estimated times with my other half so wasnt worried about going it alone and looked forward to my own company for the first time this year.

Arrived at the parking spot on the left around 9.40am, the one through the barrier was behind a pile of snow, luckily i'd been at before so knew where it was as its not signposted and was covered in snow with no cars there yet. A little blue car that had been following me for miles quickly pulled in behind me. Turns out it was a couple of guys from Glasgow ways that had abit of a hard time finding there way here due to the rubbish signposting once you come off the M9 at Perth. They were there to do the full circuit of 6 so were going to be pushed for time to keep up with the light.

Got booted and suited and made my way back up the road towards the gap in the barrier and across the bridge following the nice easy path. Made good time along here quickly warming up even with the chill spot of wind, which was not too bad down here. Plan was to head around to the northern slopes and make my way up there so pushed up the slopes giving the legs a good workout. Startled a fair few hares along this way. Could see the 2 walkers following behind and stopping to don crampons and go straight up the eastern slopes. If you look closely you can see the 2 walkers in the bottom left of the picture. The slopes were easy enough to scale aslong as you avoided the thick patches of ice. Original plan was to head straight over towards Tolmount but upon seeing the summit of carn An Tuirc only 100 metres or so away i couldnt help myself so decided it would be a good place for a quick cuppa. Seen the 2 walkers here again just leaving the summit and settled myself down behind the cairn and enjoyed the views and warm coffee. Clouds were coming and going but staying high only reaching the summit of Glas Maol. Was up and moving again after about 10 minutes and making a beeline for Tolmount. This is where things got interesting. The snow was fine to walk on but there were patches of solid slick icy snow that were impossible to distinguish between and i ended up on my butt at least 4 times with a fair few legs kicks for good measure. I think crampons would have been overkill for this but some microspikes would have been a godsend (trip to Tiso on payday maybe Made fairly good time across here with only minimal time lost to slippery ground. Had some excellent blue skies moments and bright sun for a while and the wind died down. Was amazing being here all alone with white rolling hills, rocky outcroppings, blue skies and sun as far as i could see. Seen the 2 walkers heading my way aswell after summiting Cairn of Claise. Onwards again and reached the summit of Tolmount easy enough and settled down for some more coffee, bite to eat and time to soak in the views. Stayed here for a good 20-30 mins in which time the 2 walkers came along and we had a little chat while they munched some rock hard looking snickers. They decided on a quick stop so as to push on for the other 3 Munro's they had left. It was about 1 O'clock so they had about 4 maybe 5 hours of light left so needed to push and make good time. It was about now i noiced it been sitting with my right buttock on a small patch of ice which had kindly melted and soaked my butt haha 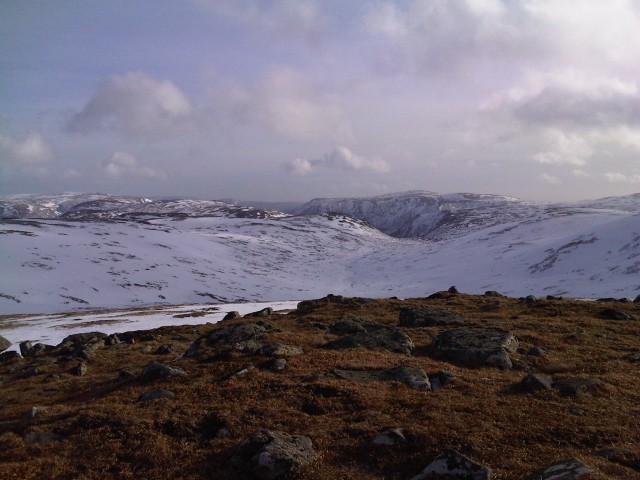 Time to head on again and made a looping attack on Tom Buidhe following the same route as the 2 walkers who left ahead of me. I noticed 1 walker decending from Tom Buidhe directly north down the very steep slopes with walking poles, I just hope he had crampons and as that looked a scary descent. No real worries on the way up Tom Buidhe and made the summit easily. Patterns in the snow Only stopped for a few minutes to take pics as there was no shelter here and the wind had picked up again.

Now for the long walk back. I made a direct line for Carn An Tuirc, this felt like a long slog over pretty featureless terrain and with the wind in my face was pretty hard going. My camelbak froze as I was going this way. After a few squishes and chewing of the mouth piece i got it going again, at least it was nice cold and refreshing hahaha. Back to the northern slopes of Cairn An Tuirc and walking down here wasnt looking like it would be much fun so onto the bum it was and a nice gentle slide later i was back down and making my way east to the path by the stream.

back at the car around 4PM making about 6 hours round trip. The walkers car was still there. I got changed and drank the last of my coffee and made my way back past the ski centre. I was keeping an eye out for the 2 chaps from Glasgow to see if they needed a lift back to there car as from previous experience the walk up from the car park to the ski centre would test the mettle of the most seasoned of walkers hahaha. I stopped at the other car park at the bottom of the devils elbow for about 10 minutes but couldnt see any sign of them on the slopes coming down from Creag Leacach so wished them well in my head and made my way home.

Had a brill time and some nice wintery weather on the walk. There was a fair bit of wind but I was more than warm enough and cant recommend the Paramo Velez adventure Light Smock enough. Nicely done Ross, I'd say the bits between these 3 on the high level would be much better in winter. It was a complete swamp in the fall and not too enjoyable from Tom Buidhe onward. Microspikes are handy so well worth a look.

Good stuff there fingeez - certainly looks very icy in many of the photos. Have these on my to do list (which seems to be growing by the minute) - cheers

Nice on Ross - looks very icy up there. Did these in high summer so wasn't too bad - only bog factor 3 - but after a wet spell this area must be a total bog-fest haha yeah i can imagine it would be stretch, yeah with microspikes it would have been really good section with nice hard packed snow. Payday in couple of weeks so micro's may well be on the cards, dont think my butt could take that everytime im out

Hey Rockhopper was def very icy for alot of it, i think doing the 6 after a longish hot spell would be the best option. ahh yeah that list keeps getting bigger here too

Hey Alastair, both times iv been up here its been early in the year so pretty solid ground on the whole, but would imagine some tough going in bog fest terrain haha

haha funnily enough i have a sit mat sloosh, just never take it out as im happy sitting on rocks, just need to be more careful picking a non icy patch rock. wind was fairly strong so i dried off pretty quick.

Great report and some cracking photies, really enjoyed it, thanks for posting

just edited the report to fix all my dodgy spelling, really must do that before posting in future haha

Great report was thinking of heading up there tomorrow so it is good to see what it looks like great pictures as well..

Nice report Fingeez really enjoyed reading it, looks like you had a great day for it. Some great views for your coffee breaks! Hope you get the microspikes, think i might get some!

The two T's were a major bog fest when I did them. Nice to see the bog frozen. Hope your frozen buttock has thawed out now

Hey Pruney84 yeah was a good day, could have done without the wind, but was too much of a hinderance. Yeah im def thinking about the micro's

Glad it wasnt boggy for me

Munros or Corbetts for the weekend? You're pushing me towards munros

Yup was good conditions, spikes of sorts would have made it even better

me pushing.....noooooooo not me. Plenty fun to be had on those corbetts too though