The Fisherfield 6 - Arduous but a 'Must Do'

The Fisherfield 6 - Arduous but a 'Must Do'


There are many excellent reports on the Fisherfield 6 from Shenavall and we had read a lot of them before tackling this epic expedition. Good advice.

Having checked numerous weather forecasts we made the journey to Corrie Hallie on Friday evening with the MWIS giving us 30% chance of cloud-free Munros and very strong winds to look forward to.

The walk in on Friday was in sunshine, clear skies and fantastic views of An Teallach and the hills that awaited us the next day. The only excitement was a heard of cattle complete with bull and calves straddling the path and looking very menacing. The farmer's sign said "Be aware bull and calves ahead". How do you 'be aware'? A bit like Boris Johnson telling us to 'be alert' for Covid! In the event, we decided to give the bull, who was making his displeasure at our presence very clear, a wide berth and continued on our way.
We camped at the alder woods mentioned in the Walkhighlands description of this route. Shenavall bothy was closed due to Covid 19 but we preferred to camp and the walk in and out to this site is much easier than the path to Shenavall.

We woke up to sun and blue skies and commenced our ascent of Beinn a' Chlaidheimh in T shirts and shorts. Now, if ever there was a hill that deserved Munro status it has to be this one. A hard slog over bog and rock but a magnificent hill with superb views over An Teallach and the rest of the Fisherfield 6. 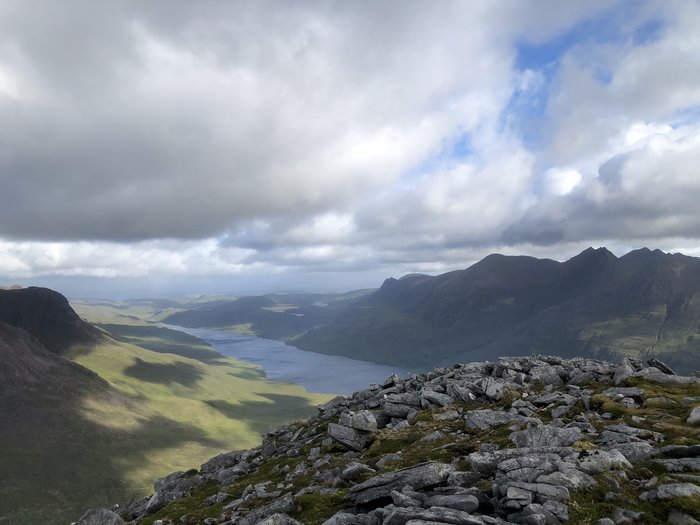 An Teallach from Beinn a' Chlaidheimh 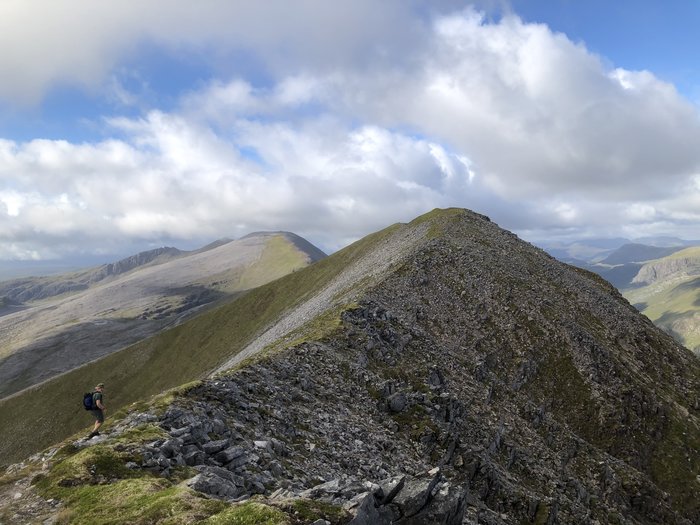 The descent from Beinn a' Chlaidheimh and ascent of Sgurr Mor was longer and tougher than it looked, particularly when being buffeted by very strong winds. We were rewarded by low cloud on arrival at the summit. Oh well, it was 30% chance of cloud-free Munros. It was at this point that good piece of advice No2 came in - take more snacks, Mars Bars etc, than you think you could need. We were only 2 hills in but were getting tired (at least I was, aged 60, my 17 year old son seemed fine!).

MCMF appeared from the cloud as we descended Sgurr Mor. What a beast! Magnificent, but a beast nonetheless. The scree path was obvious but appeared to be vertical. It proved a lot easier than it looked and we almost enjoyed it! 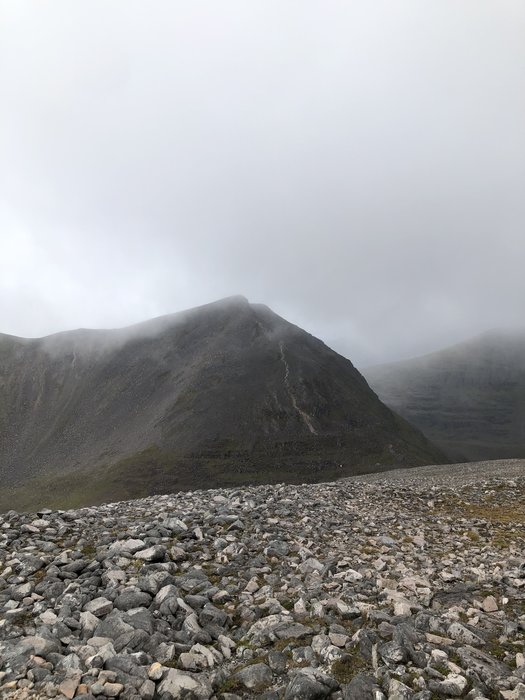 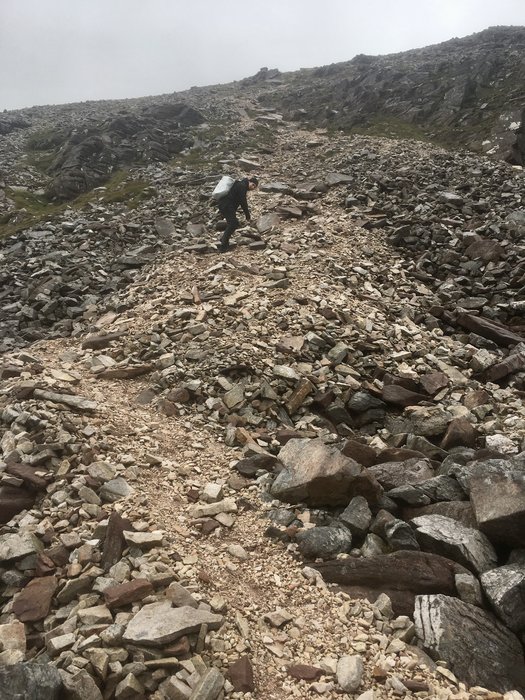 Beinn Tarsuinn and the 'tennis court' tempted us onwards and, although the ascent required dipping into the store of Tunnock's Caramel Wafers, we arrived at the top in good spirits. Surely we were half way round - oh no we weren't - nowhere near! 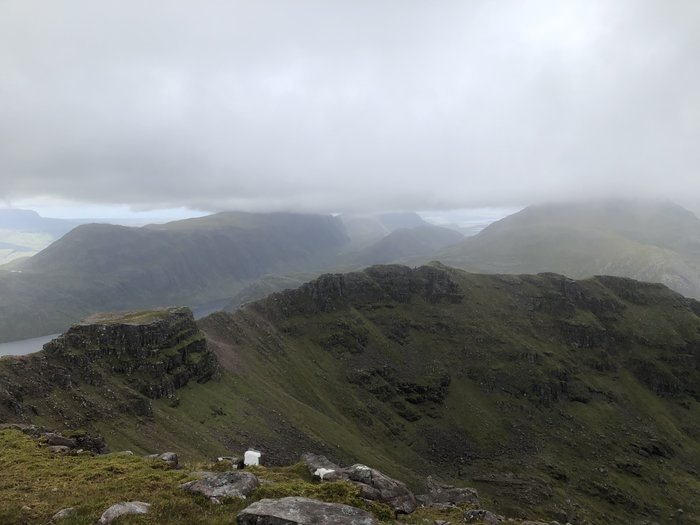 After lunch on the tennis court, the steep descent commenced and the long slog across bog to A'Mhaighdean lay before us. So, take more than enough snacks was good advice No2. No3 is - take enough water and refill at every opportunity. We have a Water to Go bottle with filter that takes out 99.999% of nasties and while I will drink straight from pretty much any Highland burn or loch, we were now getting thirsty and I was glad to be able to fill up from the peaty puddles in the bog.

The old legs needed another energy boost to cope with the ascent of A'Mhaighdean, although I kept telling myself it was really Arthur's Seat with a few bits added on. It goes without saying that everyone who has commented on the views from the summit is absolutely correct. Simply stunning. 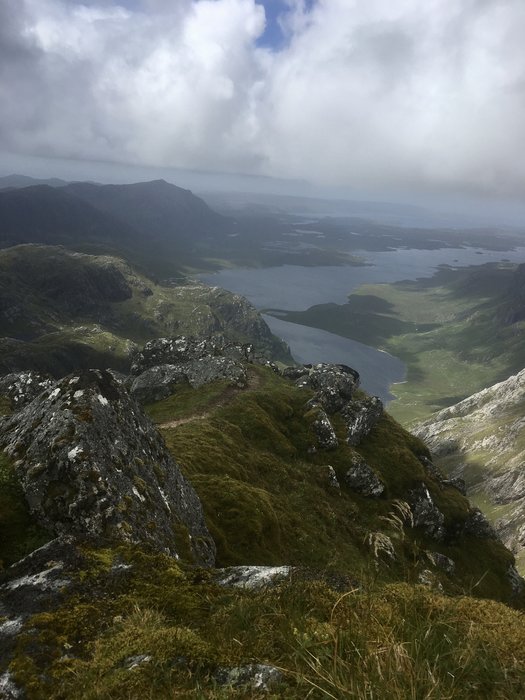 Fionn Loch and west from A'Mhaighdean 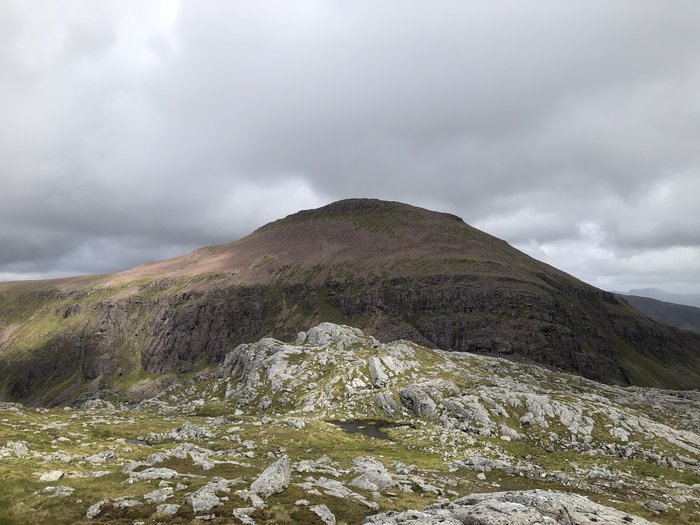 Ruadh Stac Mor looked magnificent, although impregnable from a distance. We had another well deserved, energy boosting snack before commencing the steep, but easy scramble up the scree gully and over the boulders to the summit. This could be a highlight as this was a summit that arrived before I expected it for once - no false summits 'just around the next corner'. Here it was where it should be! 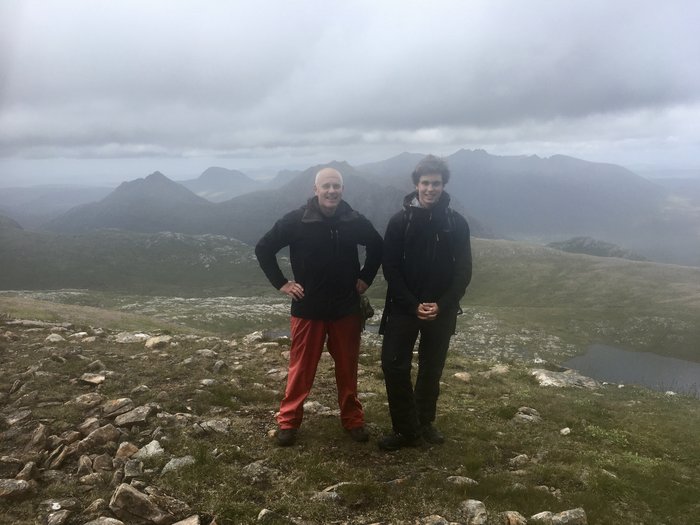 So, it had taken us around 8.5 hours to reach the summit of Ruadh Stac Mor and it was downhill from here. How could the whole circuit take 12-18 hours??? It does - trust me!

Some great views on the descent from Ruadh Stac Mor, although the boulder field made it essential to concentrate on your footing rather than the view. The legs were very tired and it was no time to twist an ankle followed. We soon found the stalkers' path that would take us back to base camp. 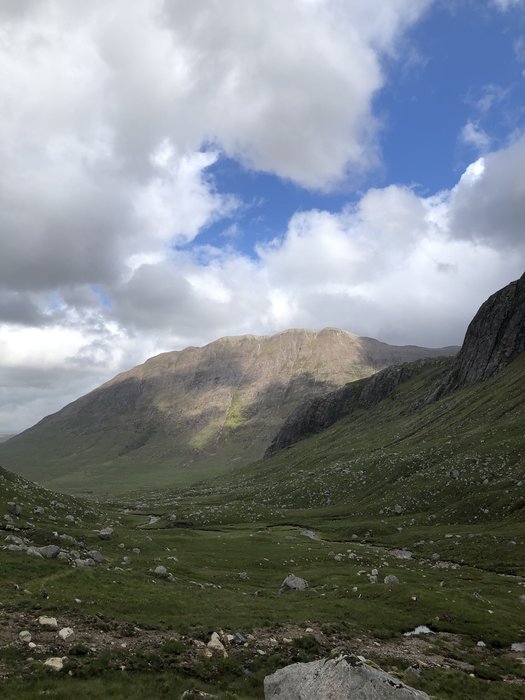 As a veteran of The Great Wilderness Challenge, this was familiar territory, albeit in reverse and I knew full well the challenges of the final two river crossings and the horrors of the 'bad bog' between Lacharantivore and Shenavall. We won't attempt that, I announced to my son, instead we will stay on the path on the Larachantivore side of the river until Loch na Sealga and cross the one river there then pick up the path back to basecamp. Good advice No4 - it's probably not worth it. Although the bog is an absolute insult after an arduous day in the hills, the alternative isn't much easier.

We arrived back at basecamp bang on 12 hours after leaving and congratulated ourselves on a huge achievement.

After a night of heavy rain and strong winds, we walked out to Corrie Hallie the next morning with only that herd of cattle to contend with!

The Fisherfield 6 is a 'must do' expedition but remember Good Advice No1 to No4 and only tempt it if you are physically fit and strong.

"... although I kept telling myself it was really Arthur's Seat with a few bits added on"

I laughed out loud at this -- I may borrow it to add variety to "nearly there" and "just around the corner" as motivational phrases!

A fine achievement to do all these in one go. Looked like a crackin' day out and very quick.
All the best.

Definitely a must do! An special to be able to do it with your son. Your report brought back many superb memories.