Creag a' Chliabhain - a local(ish) wander

Creag a' Chliabhain - a local(ish) wander

More rehab for Jackie - we thought we'd try a longer walk which was largely on the flat, however there was the option to go over a hill if things were going well. A bit of road walking was required to make a decent circuit, so I parked a short way from the usual Dunmaglass turning - we would be coming back to this point anyway. 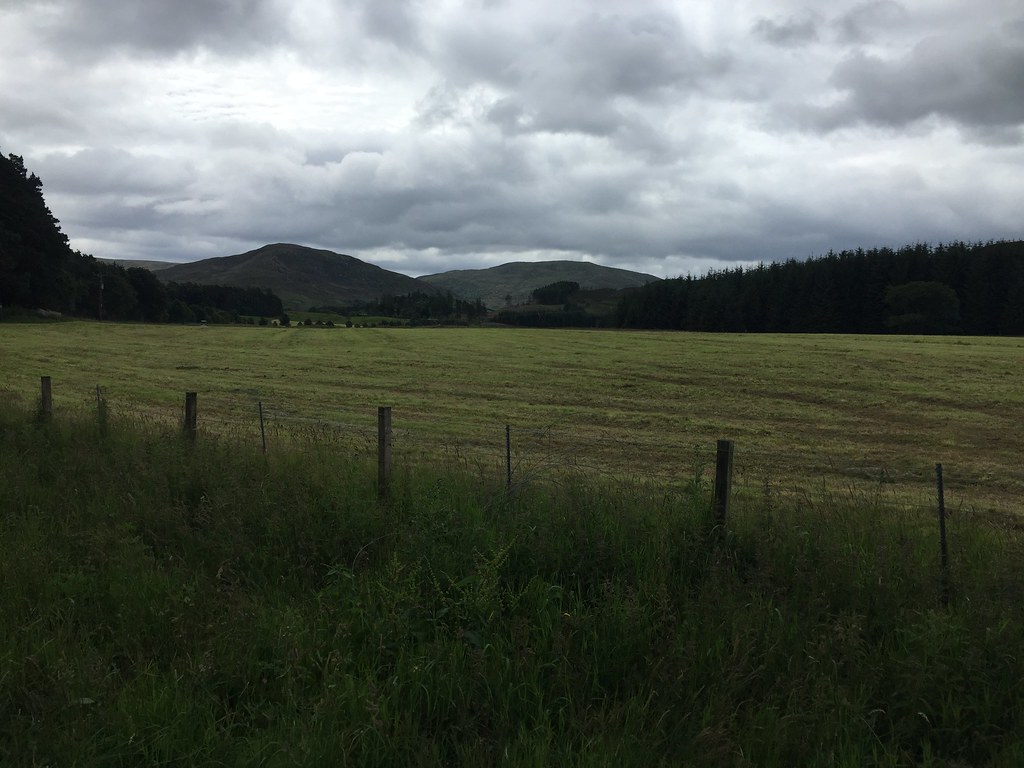 Since I first visited this area in about 2009, a rather large windfarm has been built and the tracks upgraded accordingly. Now that construction is over, the character is returning to the glen although the track is still way wider than it used to be. Community and local government payments from this development are largely what have funded improvements to the roads between Inverness and Fort Augustus on the south side of Loch Ness. 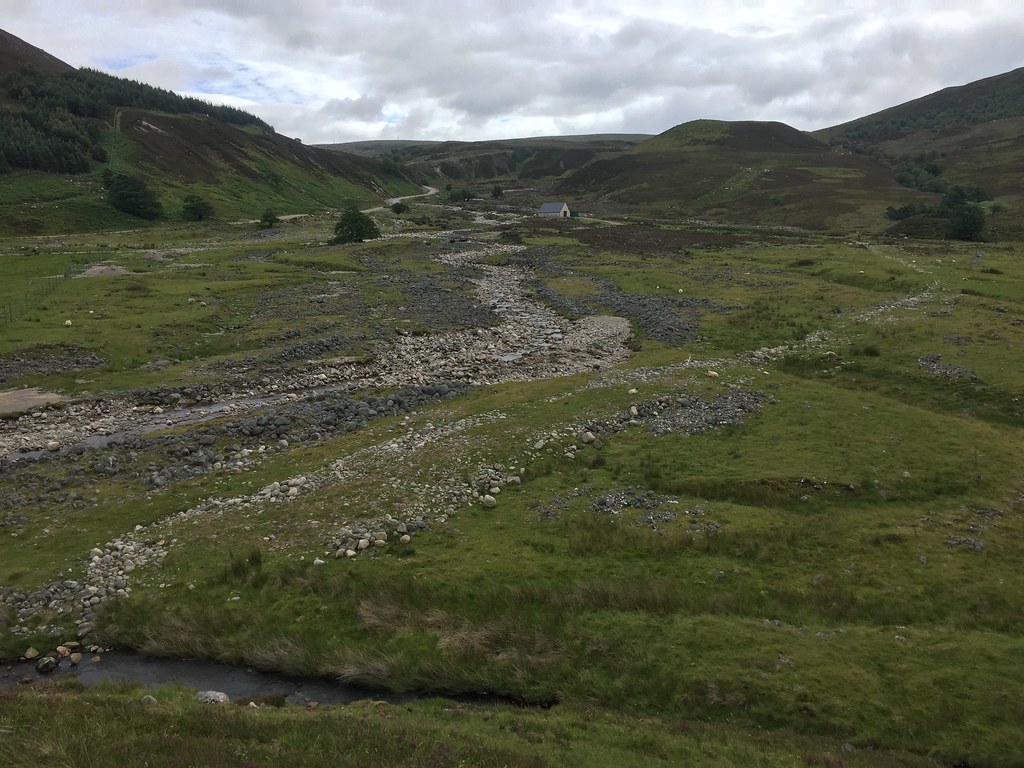 The way to Carn na Saobhaidhe

At the point where the track headed up to Carn na Saobhaide and the Monadhliath plateau, we kept low down, heading across grazing, a stile and a boggier area before picking up the track through Conagleann. Conagleann is a lovely little glen with a loch in it and craggy sides, well hidden from most people. 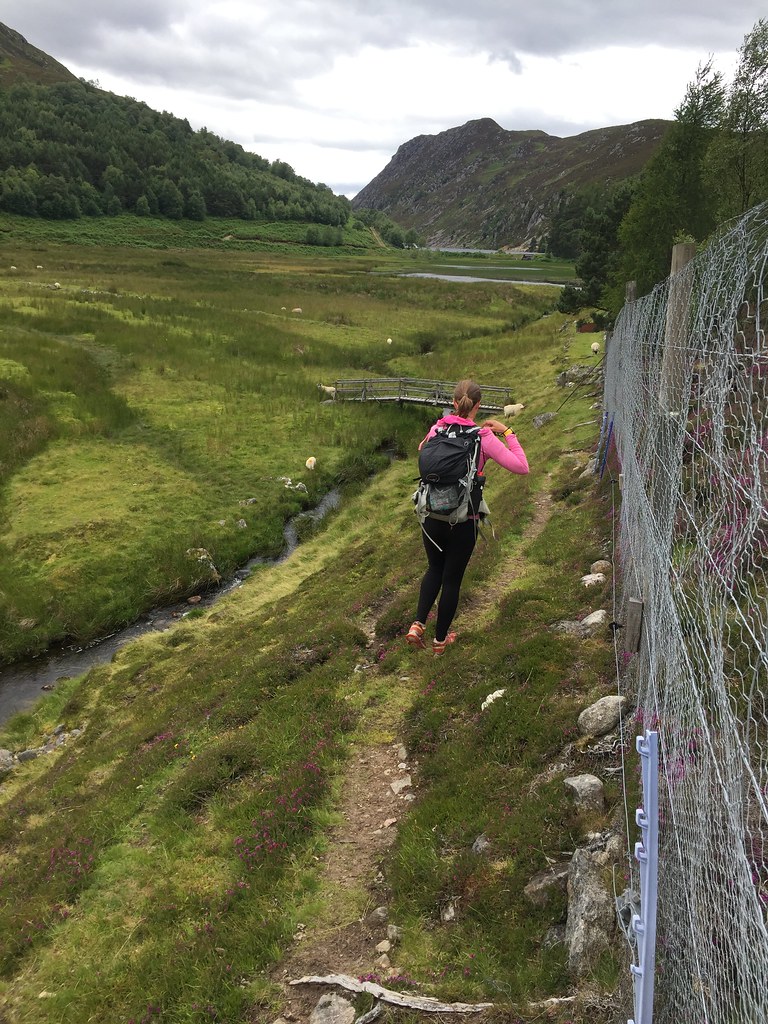 Searching for the bridge 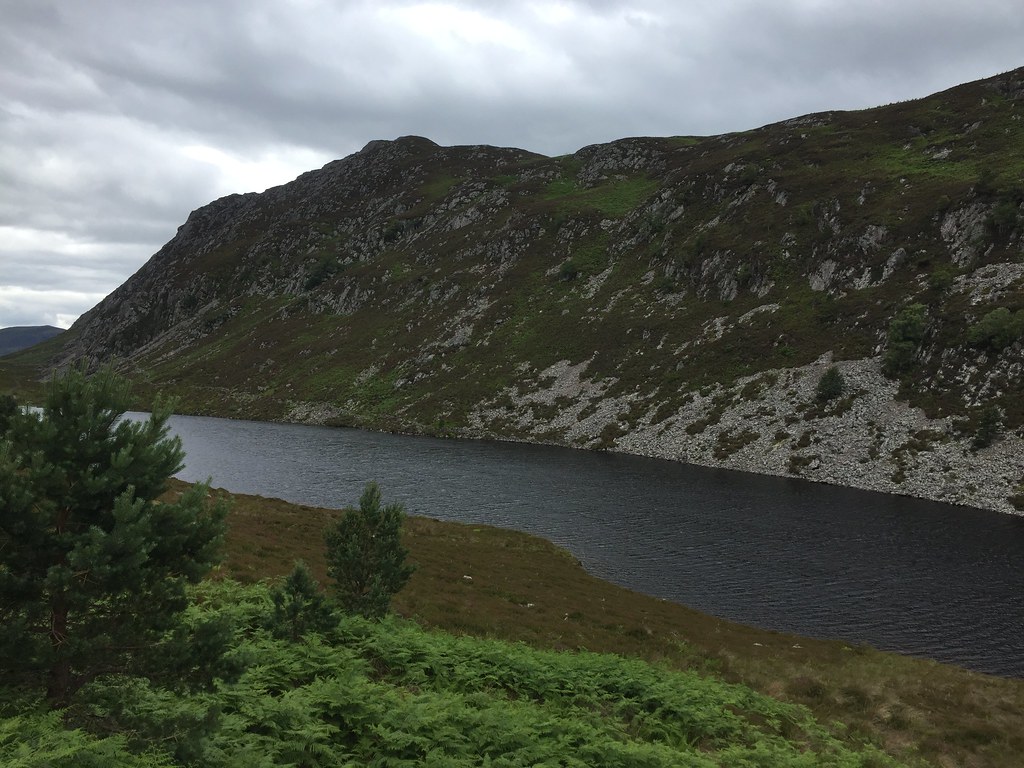 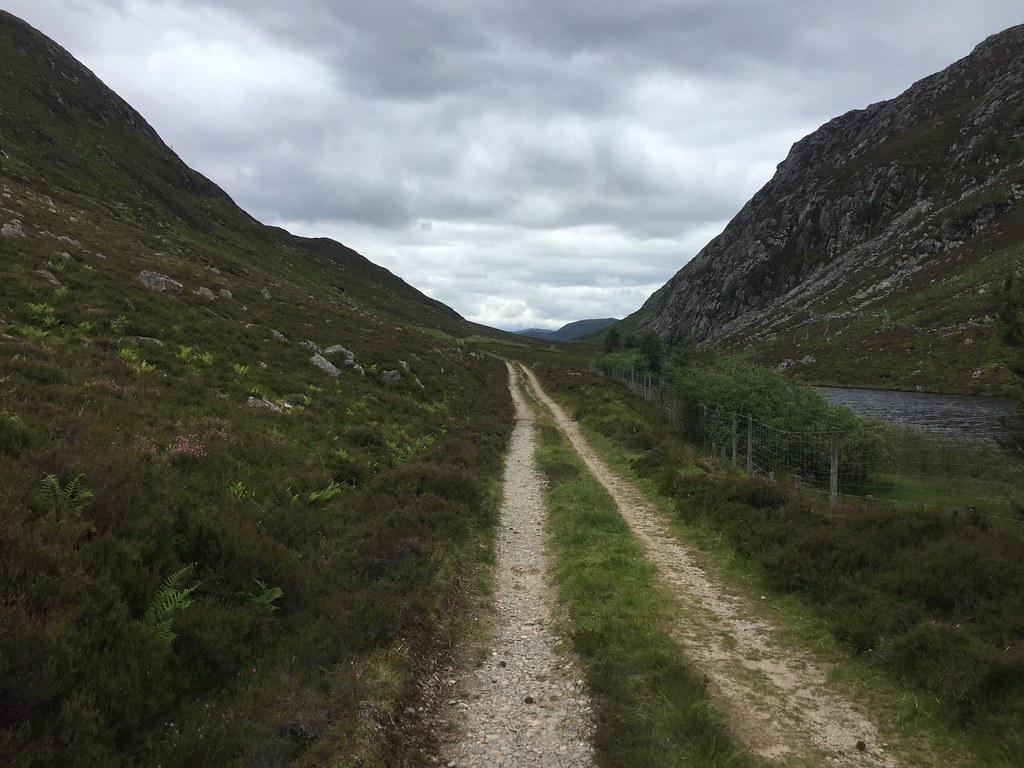 At the head of the loch we stopped for lunch and discussed options. I pointed out that although it was rough, the most logical way to include Creag a' Chliabhain in this walk would be to scramble up the steep side from here to the summit, then drop back down to Farraline on the more obvious track. Jackie was more in favour of continuing around the foot of the hill and doing an out-and-back from Farraline. I thought we probably wouldn't go up the hill at all if we did this but Jackie was fairly adamant that she wanted to. So it ended up being an unholy combination of her stubbornness and my preference for going up this side of the hill that resulted in us dragging ourselves up a 45 degree slope alongside a deer fence in knee deep heather (exactly the type of terrain that Jackie was trying to avoid) 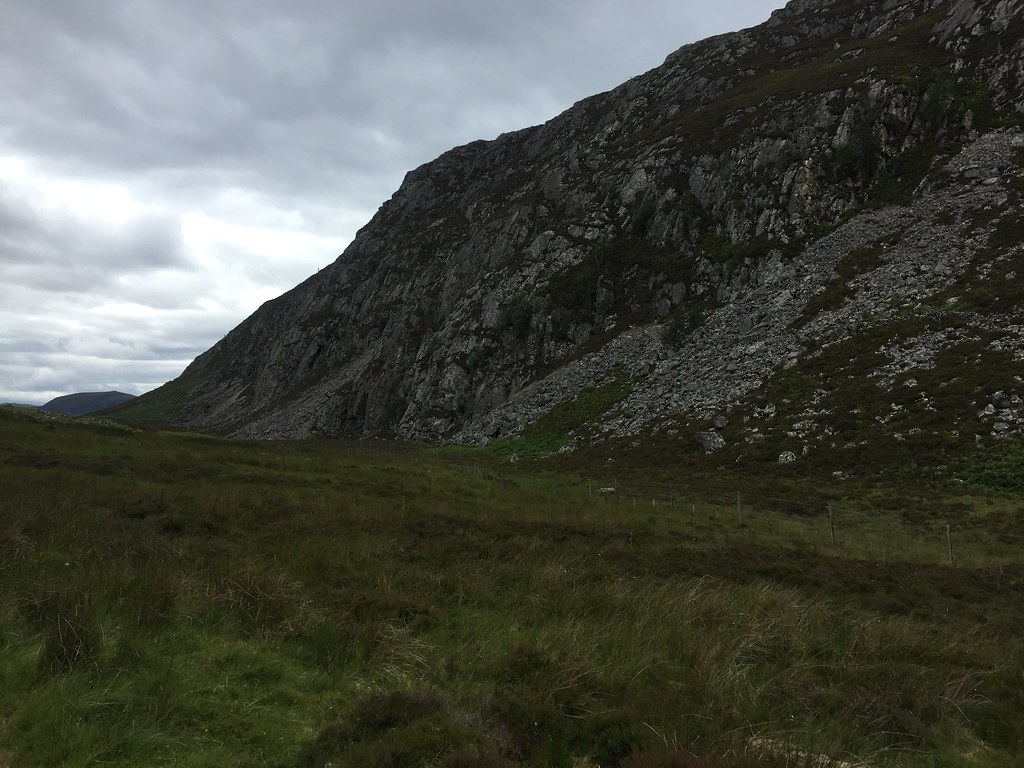 Crags of Creag an Chliabhain 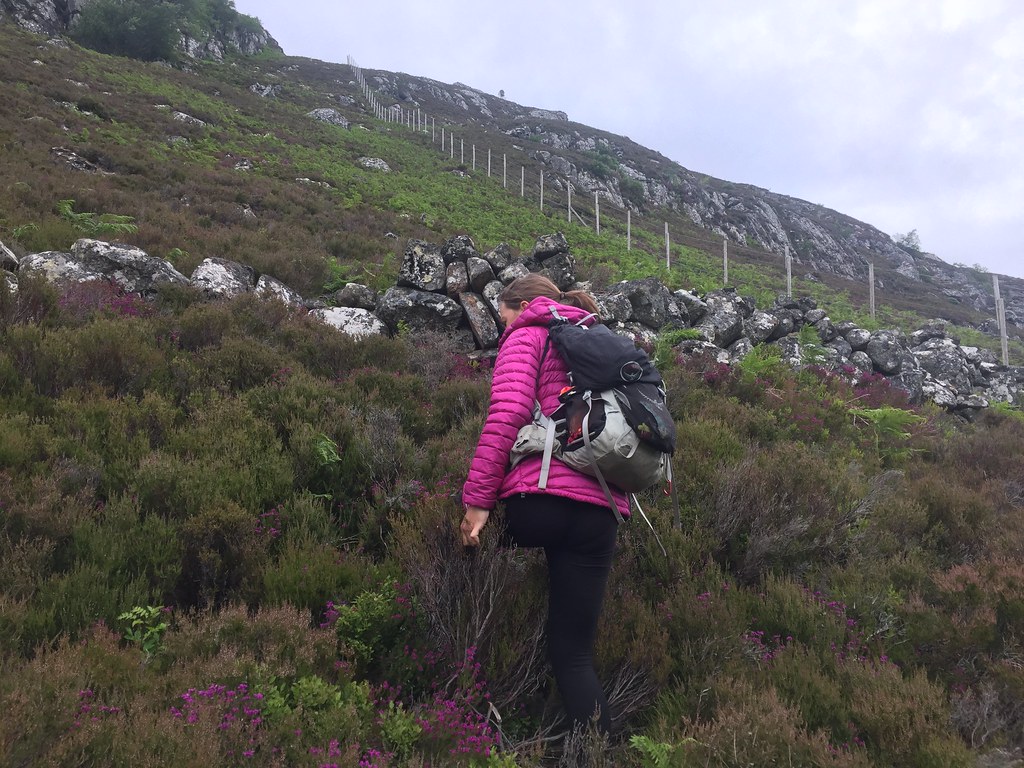 The hillside wasn't actually as bad as it looked, but that probably isn't much of a recommendation for it! The slope eased first, then eventually the thickness of the heather did too as we got on something of a ridge. It was well worth it for the views from the top though - particularly Beinn a' Bhacaidh, which was noted for a future ascent (I've been up all of these hills before but they are good enough to have another look at - particularly by a different route). 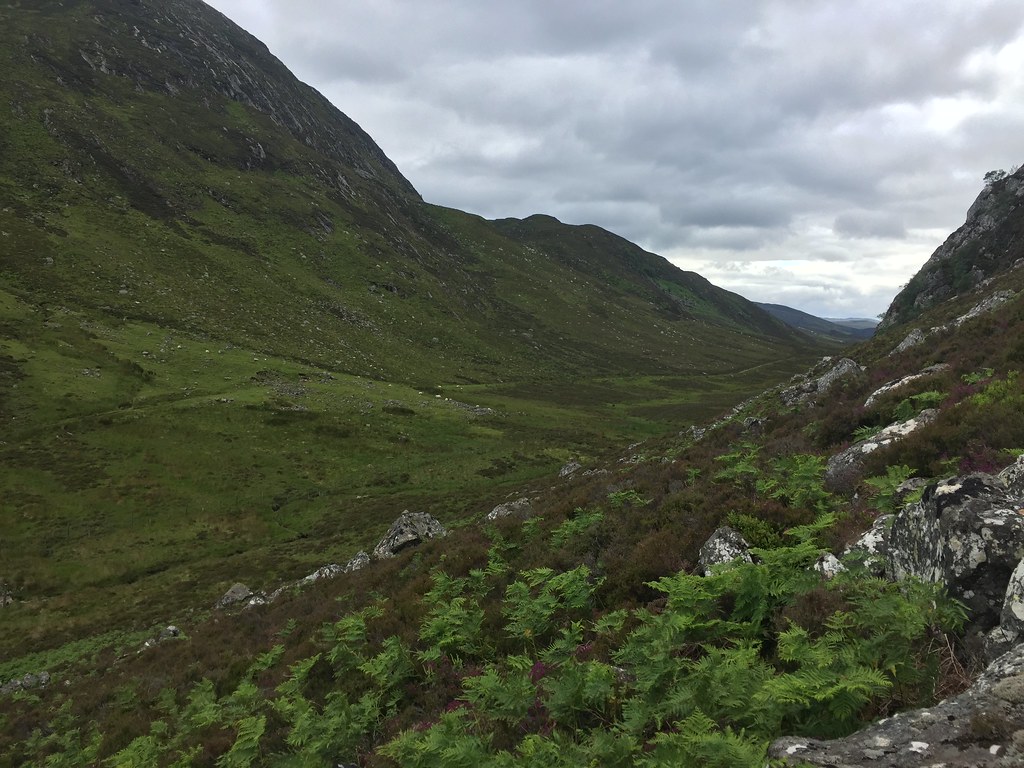 Across the top of Conagleann 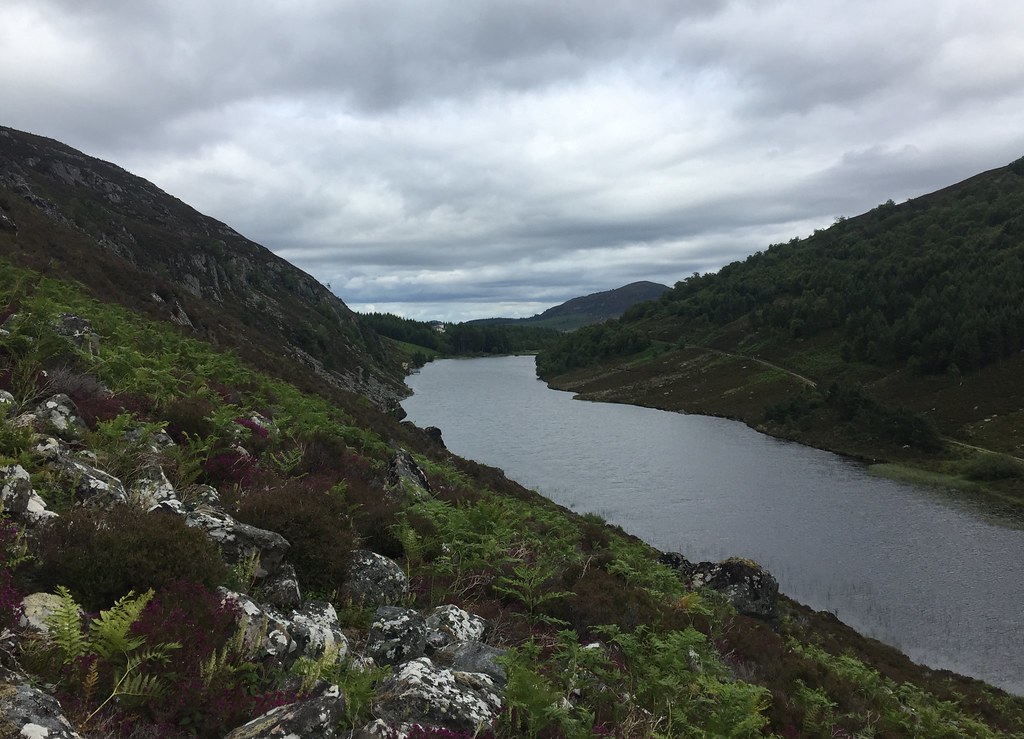 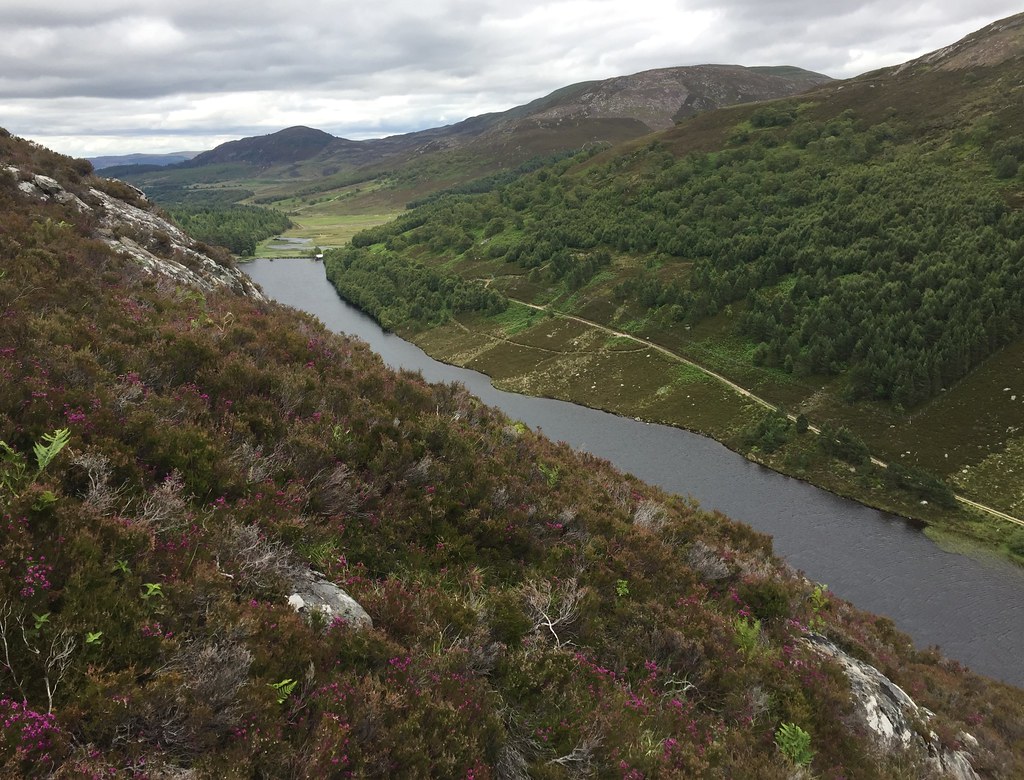 Back down to Loch Conagleann 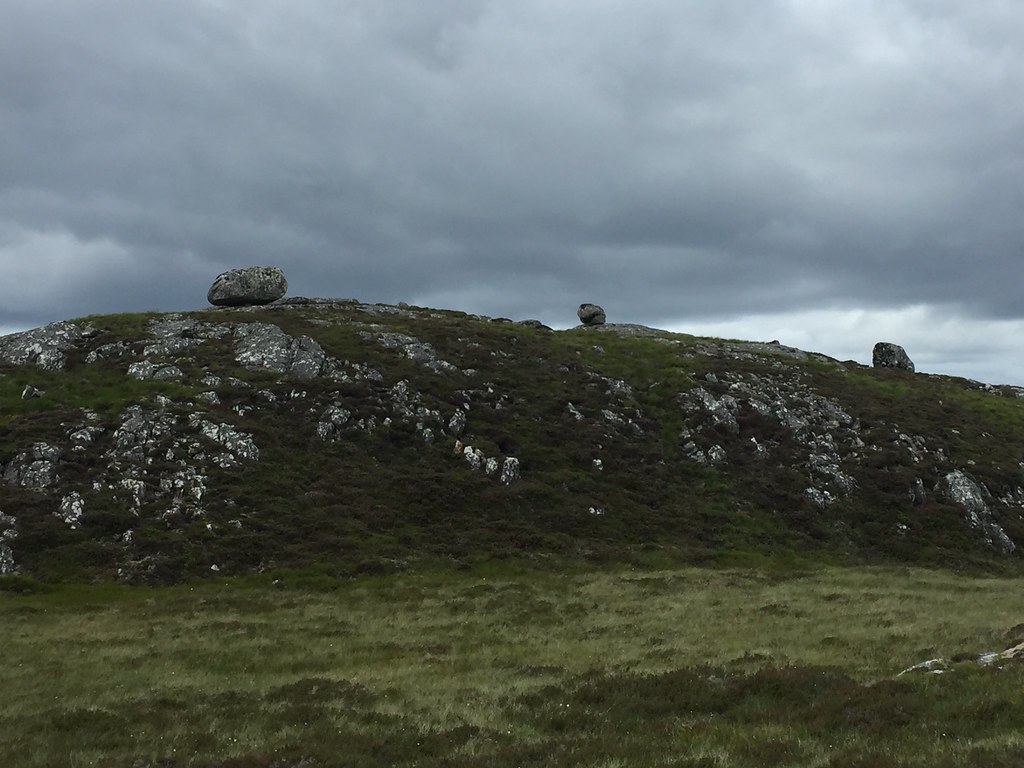 Fortunately it was breezy on the summit so the midges and clegs stayed away. After a short break, we dropped down to the Farraline track, which had a faint path leading to it - this route was scenic and really easy, and I got an earful for suggesting my route up 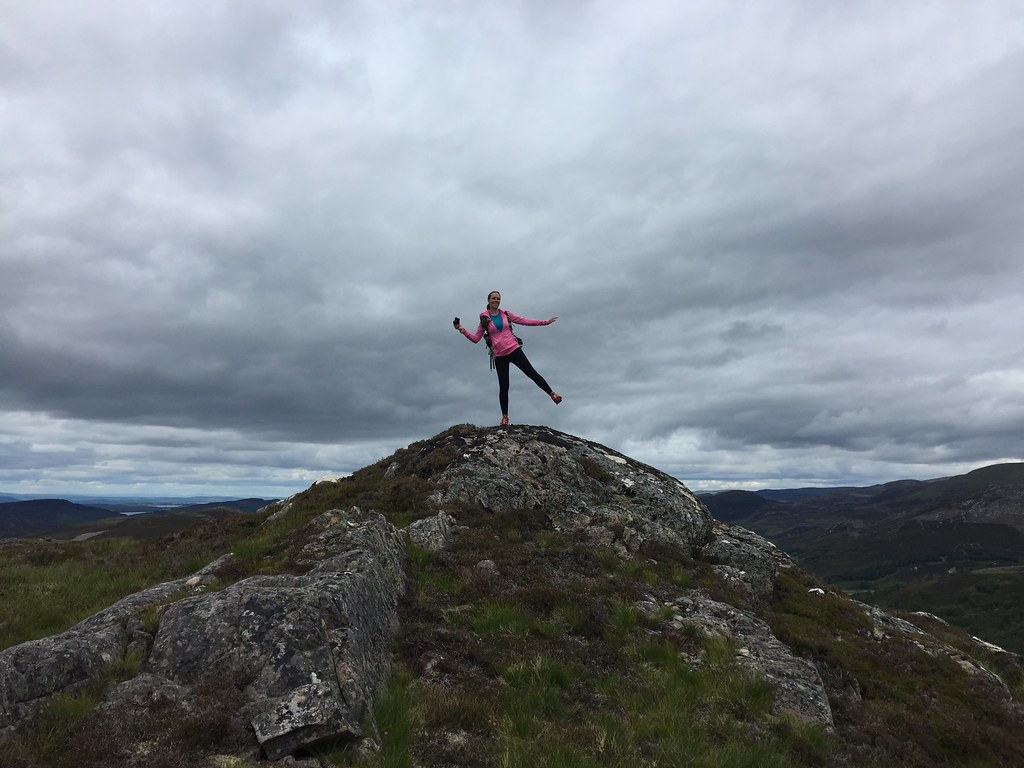 Someone's cheered up a bit 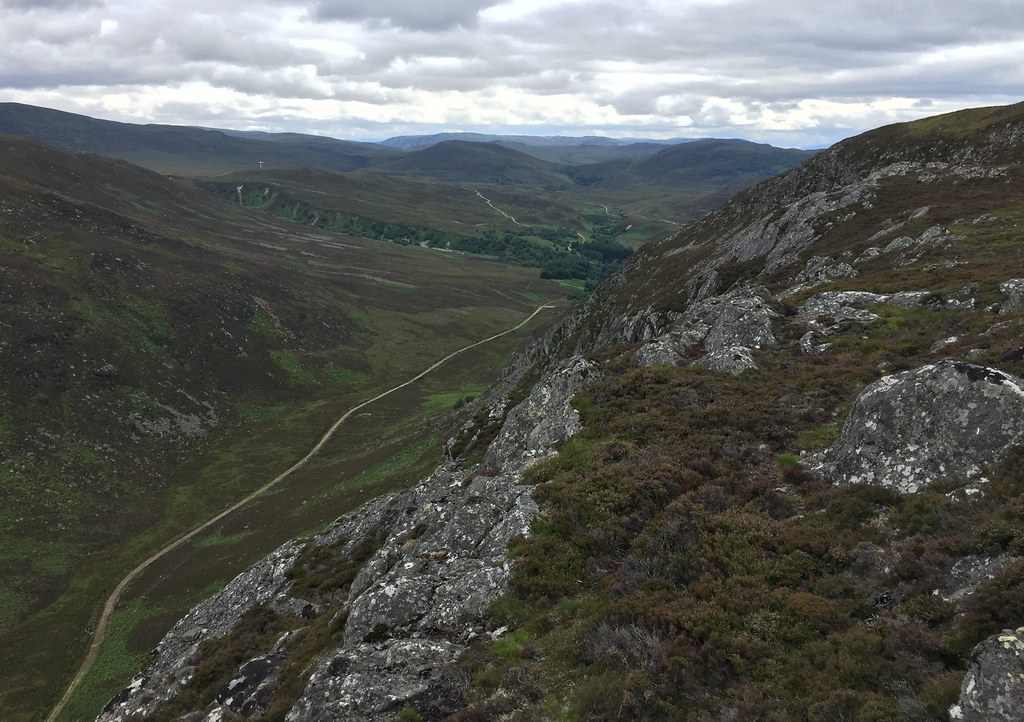 Conagleann from near the summit 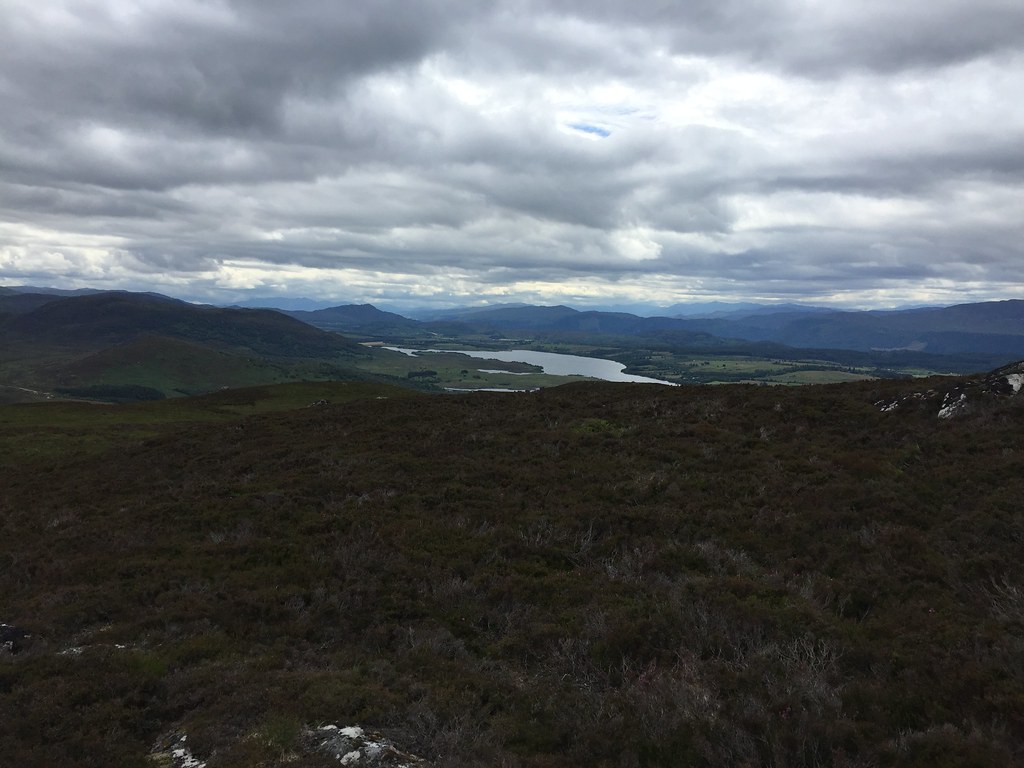 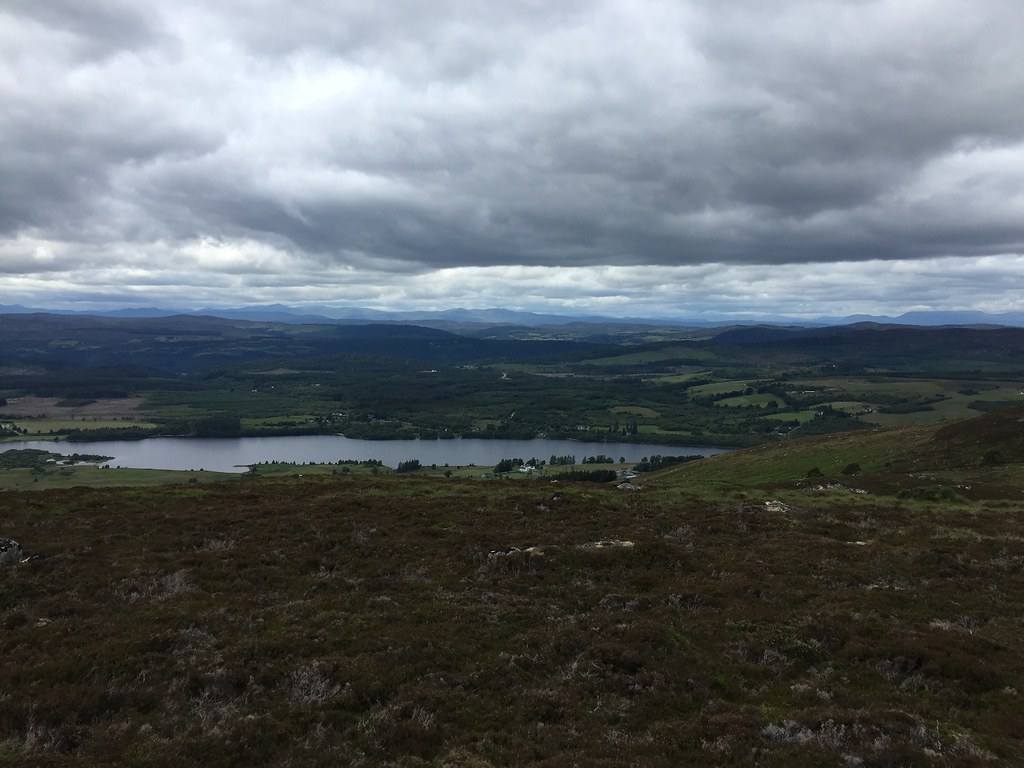 Across Loch Mhor to Strathfarrar 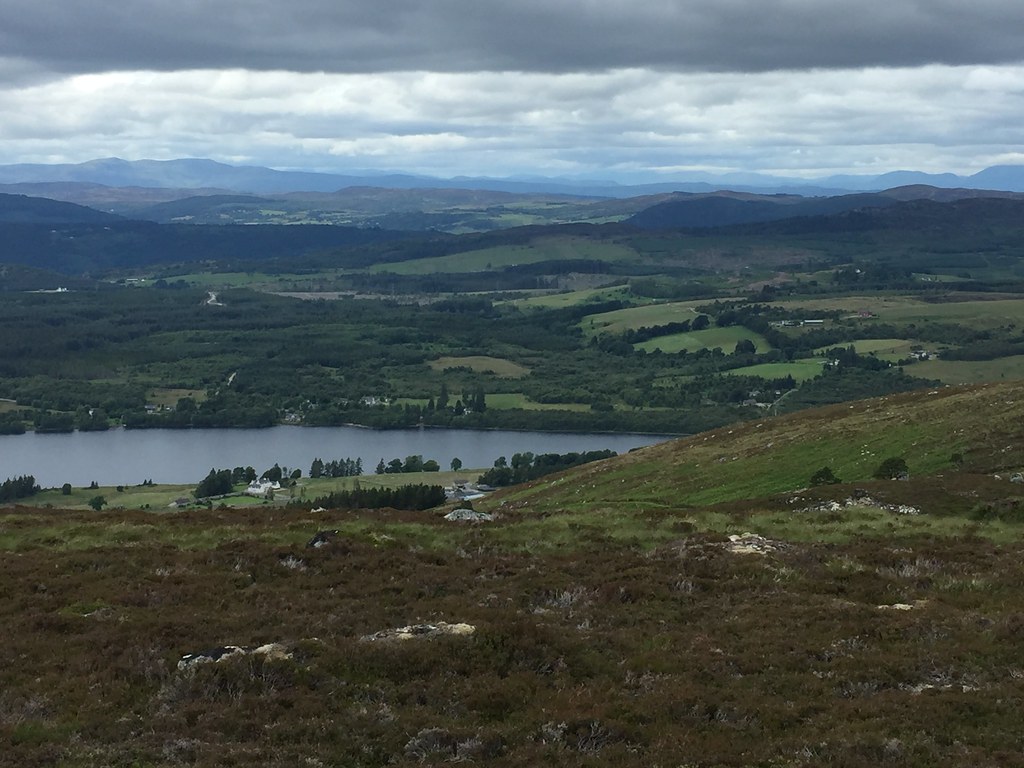 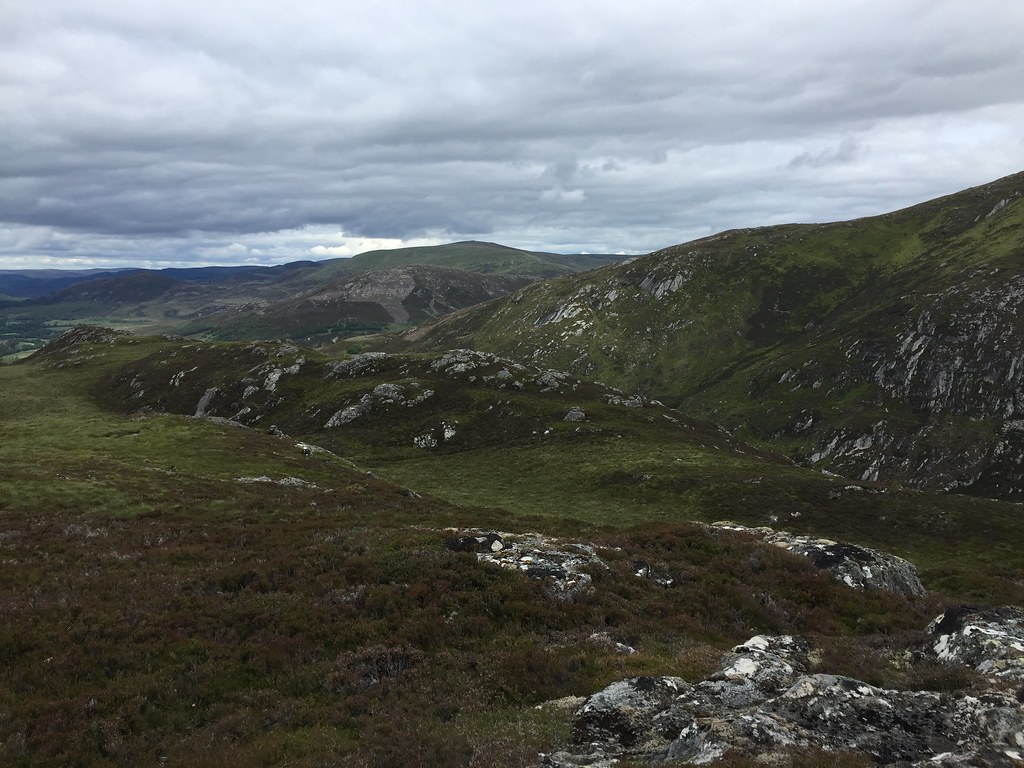 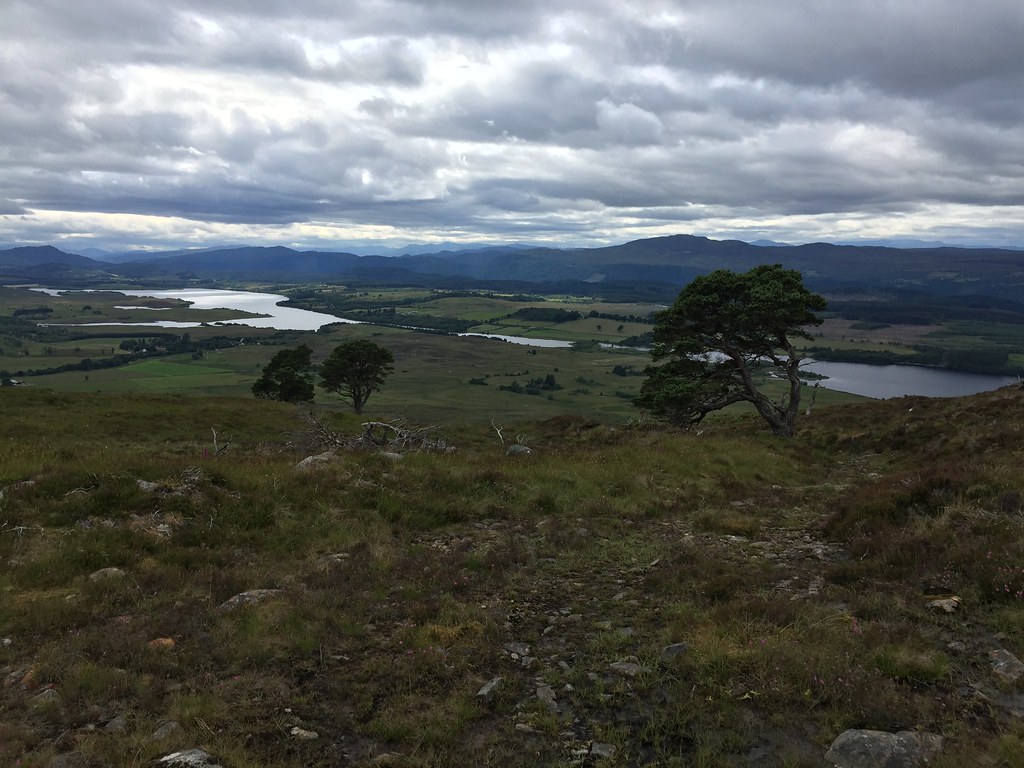 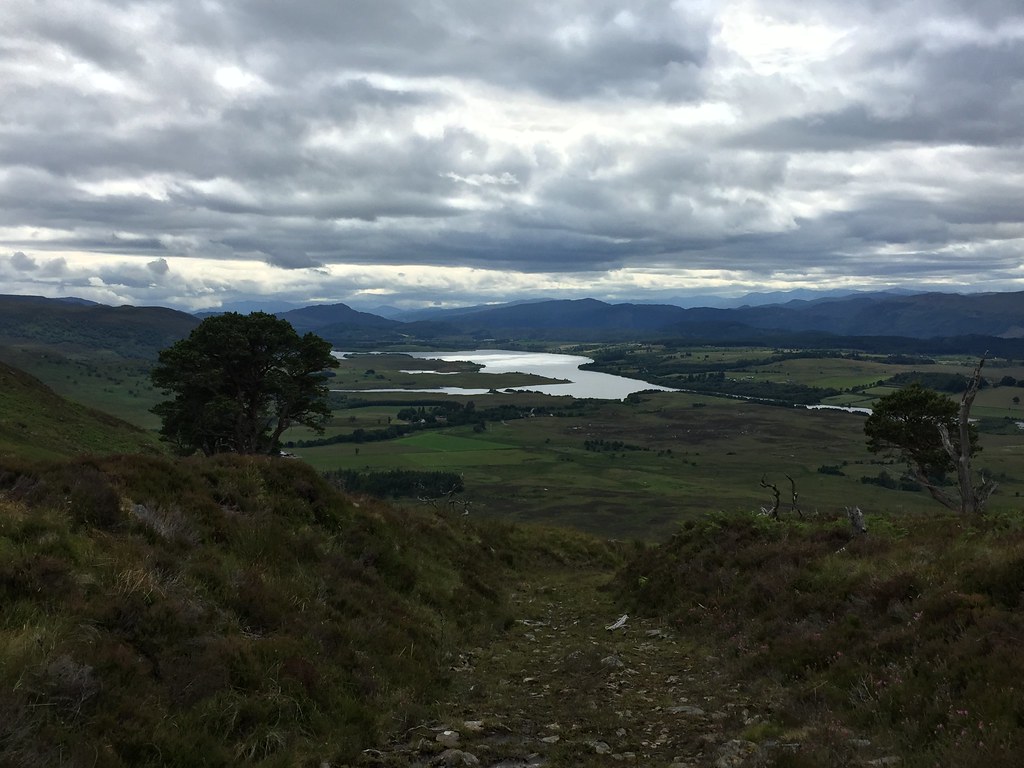 As we approached Farraline, Jackie began to feel really tired and I was almost at the point of jogging back to the car to get her. It confirmed my thought that if we'd carried on around the foot of the hill, we wouldn't have gone up and down by the descent route, however maybe this would have been for the best! 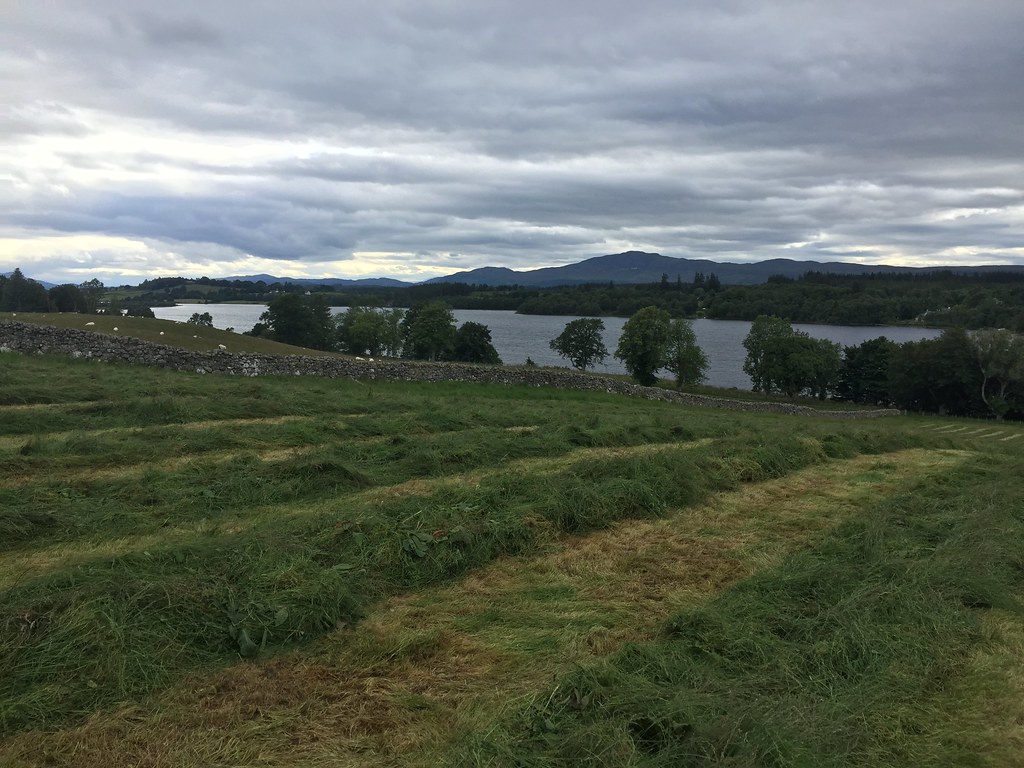 Almost at the tarmac

Instead, we cut out a short section of road avoidance that I had planned and walked the rest of the way back on the Errogie road. This is fairly pleasant as roads go, but went on for ever! Jackie perked up eventually after we stopped going uphill, but was done in by the time we got back to the car. This recovery thing is going to take longer than either of us expected I think.