Although a slightly shorter route at 13km round trip, I didn't fancy taking one of the Scottish Mountaineering Council's 'The Munros' suggestions to hike over from the Glenshee Ski Centre at the top of the devil's elbow, cresting the Cairnwell - Carn Aosda col, before heading towards An Socach but preferred instead to take the more usual route from Baddoch Farm and walk up Glen Clunie.

This was to be my first new munro to be bagged in a long time so in some respects I was a little apprehensive, even more so as I was walking alone due to my buddy's work commitments but looking forward to it nonetheless.

I parked at the layby next to the tree plantation about 5km north of Glenshee, said 'hello' to a few other walkers who were heading east and set off through the gate towards the farmhouse and glen. Being somewhat rusty on the map-reading front I had my little printed route in a map wallet in order to brush up on my map reading skills (my OS Landranger map was in my rucksack). At the beginning of the walk showing Sgor Mor

The farmhouse was soon in sight although as it was supposed to be unused I was a little puzzled to see smoke pouring from the chimney, cars parked outside and the ground floor windows shuttered - turned out the farmhouse is being renovated. 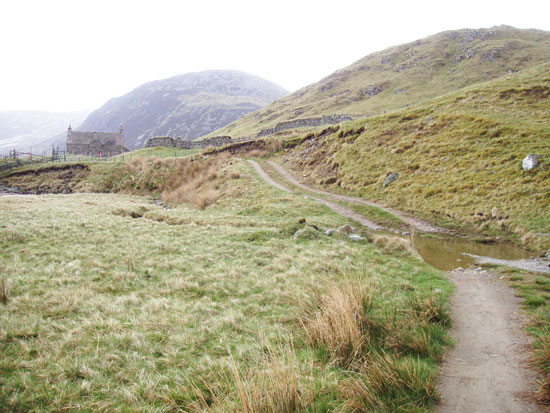 Looking back towards the farmhouse A few kilometers along the road

Before long I had left the farm behind and was several kilometers along the road (glad to have decided to warm up with a walk in if the tightness in my leg muscles were anything to go by) where I came to point where the track fords Allt Coire Fhearneasg. Unfortunately, the weather forecast was somewhat off and the squally showers that had been predicted as 'occasional in the west' were fairly persistent in the east where I was and crossing the burn at the ford with completely dry feet seemed unlikely with the run-off so I headed up a track beside the burn hoping to find a better spot to cross which I duly did.

I quickly found the track heading up Socach Mor and was encouraged to see a cairn in the distance during the gaps in the rain so it was fairly straightforward getting my position although with the boggy ground worsened by the rain the going was a little tricky from the perspective of keeping my feet dry. My boots claimed to be waterproof but I'd never put them to the test although I was thankful they held up to the job. 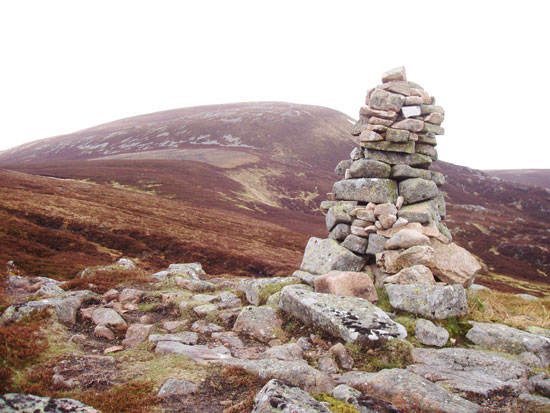 Once at the cairn on Socach Mor I was able to see the large mound of the easterly summit of An Socach more fully and after a short break, picked my way through the sodden ground to where it became solid underfoot and I was on the slopes of An Socach itself. At this point it is a little steep but this quickly begins to level out to a much more accommodating slope as the summit is neared. 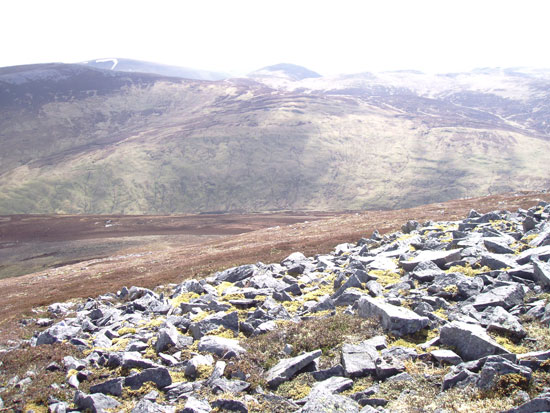 Looking back towards the cairn on Socach Mor

I made my way towards the bealach between the two tops, skirting the very top of easterly summit which stands at 938m and continuing along the broad, stony ridge for approx. 2km or so. The weather by this stage was throwing a fine mix of 'jaggy rain,' sleet and for a short time, snow, at me during the ridge walk but by the time I had reached the shelter cairn of the westerly summit of An Socach at 944m, the sun had come out. I had planned on having lunch in the shelter cairn but the wind was having none of it and was ripping across the exposed top of An Socach with a deep chilling effect so I sat for only a few minutes admiring the extensive views before setting off again. My plan from there was weather-dependent. If it had remained wet or the snow had continued I was going to return by picking up the path from the bealach and dropping down to bulldozed road as it ends at the top of Glen Clunie but as the sun came out I headed back along the ridge to the 938m easterly summit of An Socach where I could see a shelter cairn that appeared more substantial than that on the westerly summit. Before long I was tucked in this shelter cairn where I had lunch and admired the views north to the Cairngorms before setting out back the way I had come where I was easily able to retrace my footsteps on the mountain and then back to the car. Some of the other walkers on An Socach

All in all, the walk took me 6 hours, including the many, many breaks and stops someone who is rather unfit needs to take. One thing I did learn was that my very modestly priced boots, although performing admirably against the wet, boggy parts of the walk, weren't so good where it came to ankle support over the rockier parts and I ended up with a minor strain from one particularly jarring step, so it's probably time for an upgrade.

This was one of my favourite Munros so far and one I actually want to do again - can't say that about many of them! It's definitely one of the gentler ones... You can actually drop down a burn halfway between the Munro top and the Munro and it joins the glen track near it's end. I really liked that glen though - wish I was doing up the farmhouse for me!

Dunno about the farmhouse - a bit cold in that part of the world. Mind you, I wouldn't say 'no' if someone offered it to me!

I do agree about the munro. After the first uphill part it turns into a fairly gentle walk and you get terrific views.

This one slipped under my radar - a fine report. Not so sure about the hill though - the only thing I thought it had going for it was the fairly easy and short ascent...

I doubt if An Socach is everyone's cup of tea but I really enjoyed the walk that day.

I think it was one of my favourites as I felt a real atmosphere on the hill and in the glen below (the one with Baddoch Burn and all the old shielings). So it wasn't the actual climbing of the hill I enjoyed (although it was refreshingly easy) - more the place itself. I keep coming back to this post just to look at the picture looking back down the glen and the one along the summit ridge and wishing I was back there!

This walk is best done during the first two weeks in October (The rutting season).
There is usually a lot of activity in Coire Fhearneasg with many dominant stags seeing of the ambitious young bucks.
Also, an alternative route back to the start point is over the un-named top (855m Grid Ref: 102818 ) onto Sgor Mor (Grid Ref: 116825) then take the East Ridge down to a footbridge over the Baddoch Burn just below the, now restored, Baddoch Farmhouse.

eckfaebirkie wrote:This walk is best done during the first two weeks in October (The rutting season).
There is usually a lot of activity in Coire Fhearneasg with many dominant stags seeing of the ambitious young bucks.
Also, an alternative route back to the start point is over the un-named top (855m Grid Ref: 102818 ) onto Sgor Mor (Grid Ref: 116825) then take the East Ridge down to a footbridge over the Baddoch Burn just below the, now restored, Baddoch Farmhouse.

Hello Eckyfaebirkie. Is that Birkhill nr Dundee? Not sure I fancy dodging rutting stags.

I'd been happy to watch from a safe distance mind you.

Yes it is Birkhill nr Dundee, and you can watch the rut from a safe distance.