This is the second attempt from yours truly to post this report. My first version was eaten up by the ghost in my machine. I'm not totally computer-illiterate but I forgot to save the draft this time so now I have to write it all again. Arghhhhhhhhh

In June last year, when we climbed Conival via its NW ridge and visited the highest grave in Scotland (details of this trip in my report "The lost Avro Anson"). As we walked up the path along Allt Poll an Droighinn, Kevin noticed, that the passage continues to Bealach na h-Uidhe and it offers a superb alternative route to the nearby Corbett, Glas Bheinn. Of course, there is an easier route to Glas Bheinn,from the western side and this is the way we climbed it in 2011. It's only half day's walk, but to our excuse, it was in winter conditions. But in my husband's eyes, a "quickie up and down" didn't really do the justice to this lovely Corbett, so he plotted a more complicated route, including both Glas Bheinn and the neighbouring ridge of Beinn Uidhe, infamous for being so rocky it hurts to traverse it

Track_GLAS BHEINN20,3KM.gpx Open full screen  NB: Walkhighlands is not responsible for the accuracy of gpx files in users posts

Actually, Kevin said this kind of attitude is not really climbing/hillwalking, it's panthering. To give you the definition of panthering... It means climbing a mountain using the most ridiculous route, just to make it more difficult for no reason

We started from Inchnadamph. The car park wasn't as crowded as we expected - plenty of room to park and as a bonus, the welcoming committee in the shape of a swarm of hungry midges. We quickly geared up and run away from the car park, leaving the bloodthirsty cloud behind. The path up Poll an Droighinn is part of the Cape Wraith Trail so it was obvious to follow, if a bit wet in places. The morning clag still covered the tops of Assynt hills, but we hoped it would burn off by the time we reach higher ground. 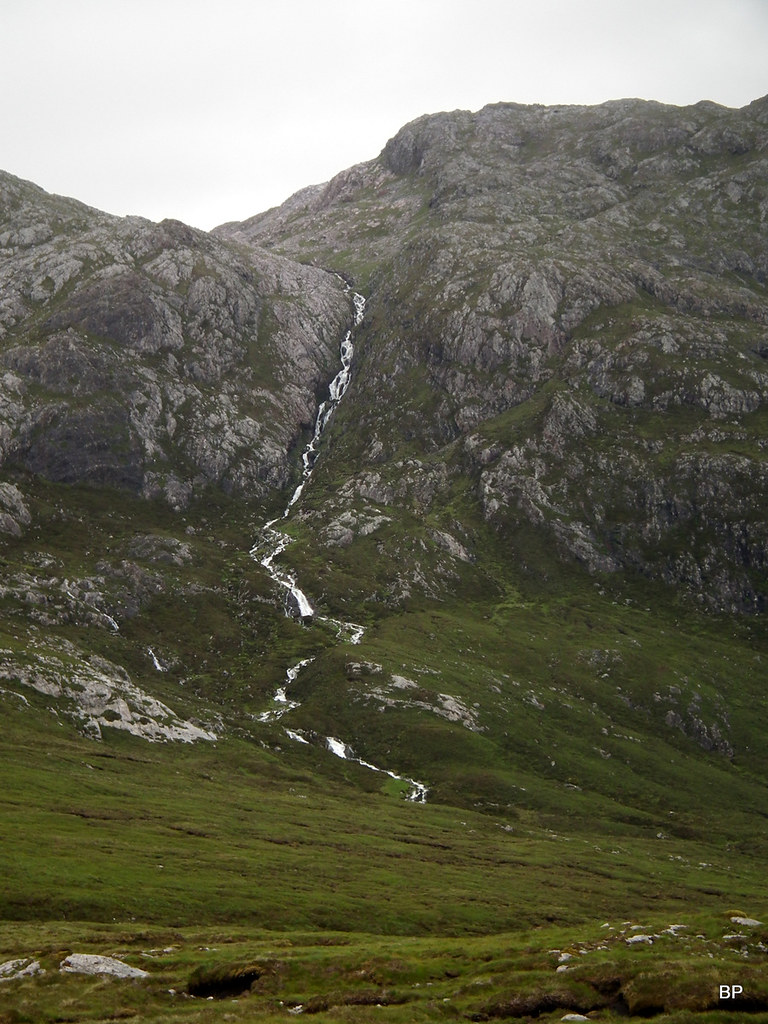 2020-07-07 glas bheinn 025 by Kevin Dalziel, on Flickr
This rarely used approach to Glas Bheinn could be called "the mini loch district" (as oposite to the Lake District) due to the number of lochs and lochans scattered everywhere:

We wondered about the crossing of Allt a'Chalda Mor. WH description suggested it might be impassable in spate and it had rained quite heavily the previous night, but we needn't have worried. The steppeing stones were partially submerged but we hopped over easily, even if without much grace: 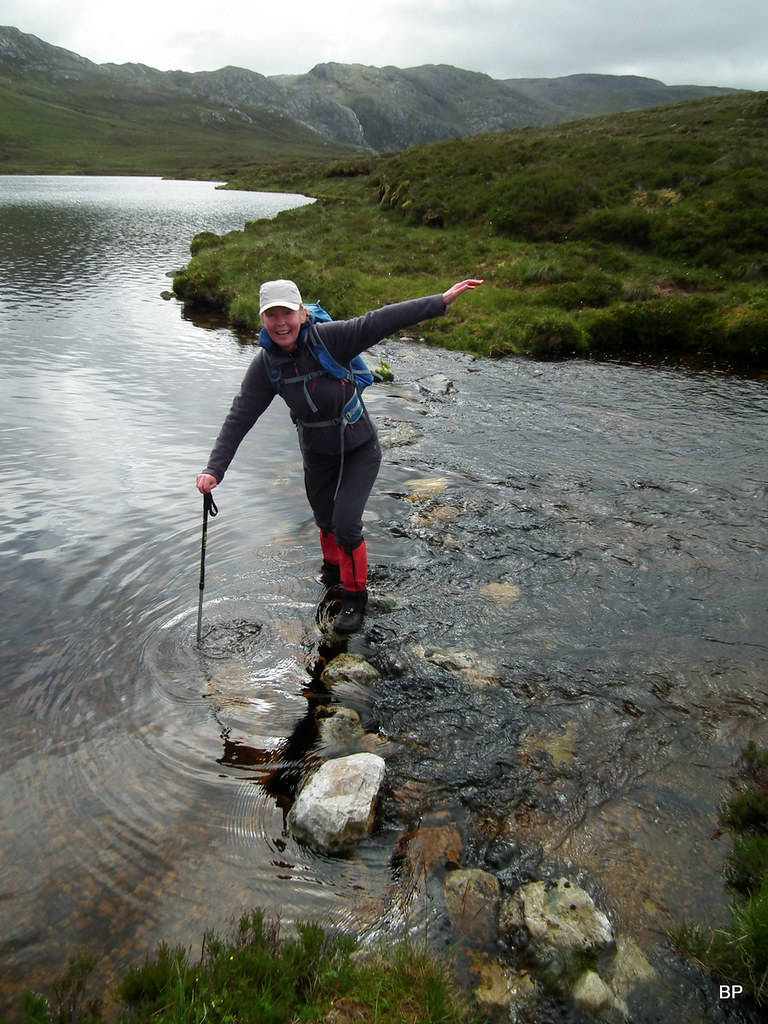 2020-07-07 glas bheinn 047 by Kevin Dalziel, on Flickr
Soon we came across the second stream but this one was even easier to cross: 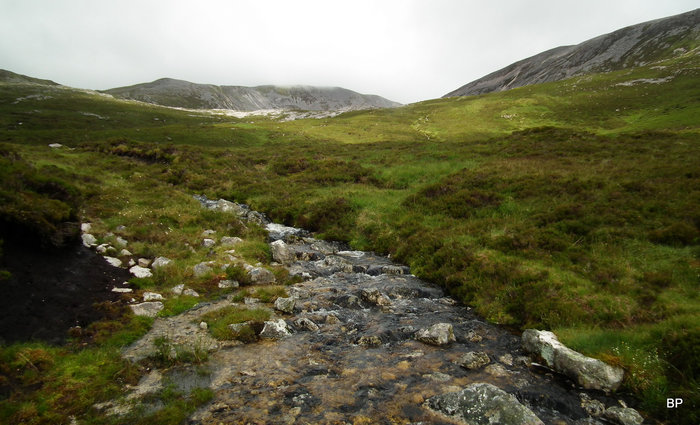 By now Kevin was studying the map with the facial expression I knew very well: he's cooking something up!
And of course, he simply had to make our lives more difficult by changing the route! Instead of going up the obvious path to Bealach na h-Uidhe, he suggested, we should cross just below Lochan Bealach na h-Uidhe and gain the ridge of Glas Bheinn further to the south. "More ridgewalking!" he explained "And a circular rather than boring up and down!"
Anybody mentioned panthering?...
To gain the southern end of the ridge, we had to cross one more stream but who pays much attention to such unimportant details? I'm not complaining but we really need to talk about Kevin, especially his attitude to extra ridge walking After a short steep section we gained the ridge and by then I was in the mood for fun and games, despite the cool breeze. Surprisingly cold it was as for the middle of July. Scottish weather is so weird. No comment! 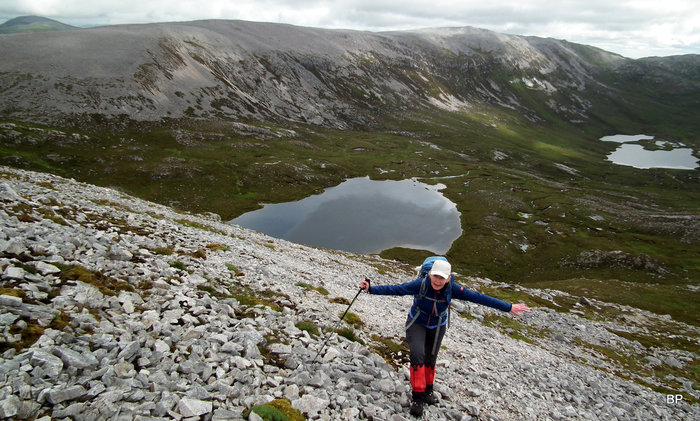 Panoramic view east to Beinn Uidhe and the bulk of Conival-Ben More Assynt:

2020-07-07 glas bheinn 088 by Kevin Dalziel, on Flickr
We were always fascinated by the rock of Assynt. Glas Bheinn is probably one of the whitest mountains in the Highlands, considering how much quartzite it contains. Kevin spent some time studying the rocks: Higher on the ridge we had good views in all direction, but the morning clag was reluctant to disappear and the shapely line of Suilven was still partially obscured:

The summit was cold but at least the large stone shelter offered us a good spot for lunch. Lucy claimed her 112th Corbett! By the time we finished our sandwiches, weather improved slightly and even some clear sky appeared to the west, framing Quinag in lovely blue frames:

Now, having re-visited the Corbett, we still had plenty of time and Beinn Uidhe was waiting!

We quickly located the path coming down the steep scree to Bealach na h-Uidhe. Kevin complained a bit about his knee giving him tough times, he said he had to slow down and take it one step at a time. Or was it just an excuse to take more panoramas?
Kevin, look, this is the way down! 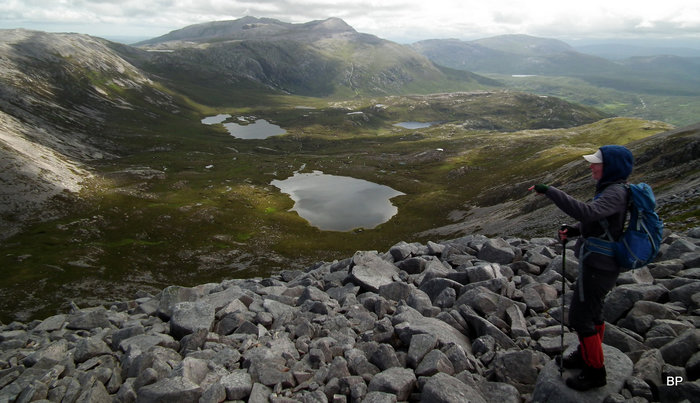 As we started descending to the bealach, we simply couldn't stop shouting "aaah" and "wow, just look at this"!...
Panoramic view east to Conival-BMA massif:

2020-07-07 glas bheinn 165 by Kevin
Dalziel, on Flickr
Looking down the descent route, with Beinn Uidhe to the right of the photo:

He took his time: Looking back at Glas Bheinn from the bealach:

Now, it's miles and miles of rock hopping, but don't tell me twice!

He wasn't impressed but didn't turn back either: Suilven and Canisp from Beinn Uidhe: I had heard stories about Beinn Uidhe being such a torture, but to my own surprise, I rather enjoyed it! It might be miles of rocky terrain, but the rocks are relatively flat and easy to walk on. Even Kevin with his dodgy knee didn't find it too hard.

He Who Always Knows It Best on the summit of Beinn Uidhe, 741m. Technically, it is an outlying top of Conival but for us it felt more like a natural prolongation of Glas Bheinn. Views from the top are just as good as from the Corbett. Quinag is out of sight but there are better vistas towards the main ridge of Conival-BMA, including the illusive plane crash site of the lost Avro Anson. Back along the ridge to Glas Bheinn:

Panthering might be tougher than hillwalking, but I still wouldn't swap it Beinn Loinne, one of the less popular Corbetts, can be linked to two Grahams for a superb longer day:

As our descent route we planned to continue along the ridge and drop to Loch nan Cuaran, where we could join a path descending along Allt Tarsuinn. We had used this path when visiting the crash site so we knew it wasn't too steep for Kevin's sore knee. By now, we were mesmerized by the white cliffs of Assynt and simply didn't want to go home... Loch nan Cuaran and the flat, green area where the doomed Avro Anson attempted its landing. Looking at the site from above, no wonder the crew considered it a possible spot for landing, bearing in mind it was then covered with snow: I didn't hurry him up on the walk back, especially that we had plans to tackle the south ridge of Sgurr na Lapaich the following day. Weather has improved to a sunny, warm afternoon, and the white, white cliffs of Assynt looked simply magical:

We returned to the car park to the swarm of bloodsucking midges, but by now our spirits were too high to even care about a few bites. We had a gobsmacking day. Sometimes it's worth panthering a hill rather than just simply climbing it

That looks like a fabulous place to visit. A part of Assynt I haven't yet visited...result!

I do sometimes leave the canoe at home

It does look like a properly wild area, and I've not done much in that area, other than C and BAM in horizontal rain.

Mind you, we have paddled this nameless little lochan;

and this, Lochan Fhionnlaidh which was 180m up...

My friend's 12 year old apparently says, when he's climbing hills, that "I bet Mal would carry a canoe up here". This is partly because we told him we were going to take one up Snowdon at New Year...

Even from hillwalker's perspective, I can see Assynt is full of lochs to explore. The area north of Beinn Uidhe-Conival ridge is more water than land: The nearby Sub'2 Marylin, Maovally, is on our to-do list and it would be a perfect viewpoint for this remote corner of the far north. Plus its name sounds suitable for Panther to visit

I'm trying to visualize a group of people carrying a canoe up Snowdon. Sorry, it beats my imagination

Perhaps it should be renamed "Little Stob Ban"

. I just did the tourist route on this one - maybe on my second Corbett round.......