and that makes four for the day 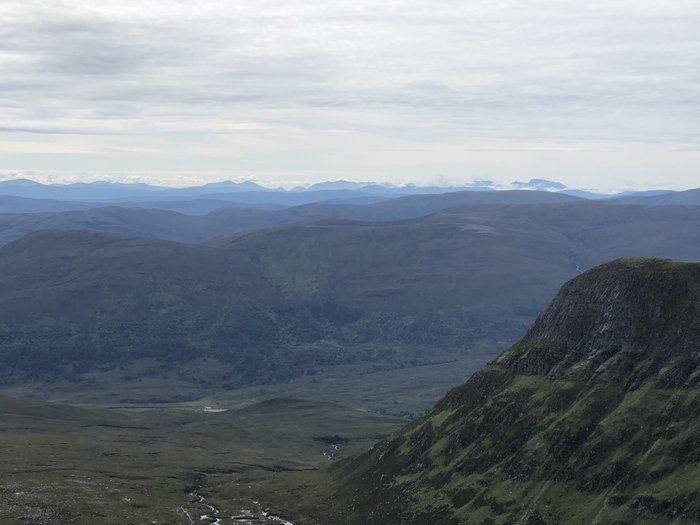 views to the West, Ben Nevis there 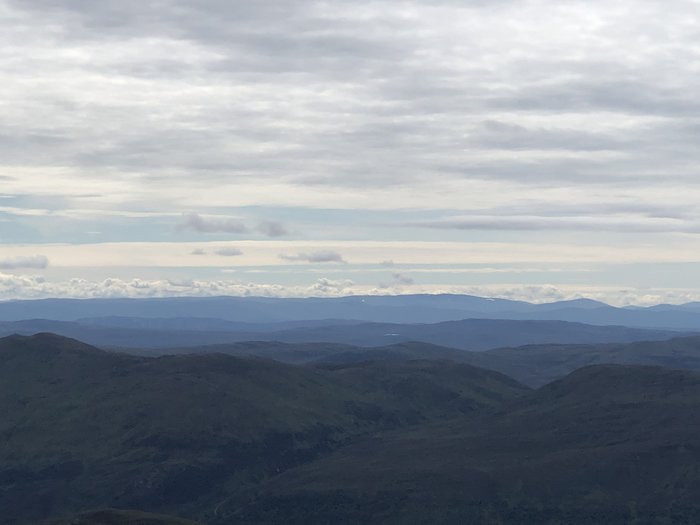 OK, having "lost" my last walk report which I took time and care on re the paths/out of date maps etc in the Loch Arkaig area, I am going to keep this short and to the point.

If you follow the walkhighlands route and go anti clockwise you will likely lose the will to live due to the manky bog that accounts for most of the hike up the first munro. We met some folks with their kids heading up when we were heading off and the kids were not happy, shoes/boots completely soaked before they'd got near the first munro. It's up there with the worst ever bog path - and we've done a few now.
Second, the distances need some review for this walk. The drive in from the gate is much longer than I'd read. I sent my son ahead before 9am on the bike (to ride to the car rather than walk the road at the end) thinking he's be waiting for us 25mins later at the start of the clockwise route but it's well over 10km to the start and the road is hilly.
Third, the walk itself is 18.6km and then the bike part, for me, was 7km almost exactly.

Got the boy back in the car with the bike and drove on, parked bike as planned. Saw "Grizzly Munro Diaries" truck and chap sorting his bike there. Will come back to him later.

After the lodge there is a track heading up to the right of the road (which is in great condition by the way, nae potholes, wish the roads of Edinburgh were in similar shape). This is within 50m of a bridge and there is a grassy section upon which you can park even in a normal car (we have a Landcruiser). The track up is great, eventually you get onto the grassier section and there are a few damp bits but the walk up to the lochan is a breeze and you gain ascent without any effort - 400m or so "free of charge" I would say, we walked the first 4km in a smidge over an hour including a water and snack bar break. There's a but of huffing and puffing after that at a steep path up beside a burn but then you fit a beautiful contour/traverse path which heads up to the plateau. Again pretty much free ascent and dry, dry, repeat, dry.

First munro is lovely - Sgurr Fuar-thuill. Nice trot over the Greag Ghorm a'Bhealaich and then to Sgurr a' Choire Ghlais where Sophie (13) celebrated her 50th Munro. Weather amazing, amazing views. On the way off it we saw a chap climbing up with a bike on his bike. When a 13 yo says "why" you can only smile but he was a lovely chap and told us he was aiming to take his bike up all the Munros, only one person has done that, ever !


Third munro for us (Carn nan Gobhar) is crap, boulder field, uninspiring do took a photo and headed over to #4 where we had our second lunch before heading down.

It's a decent run down actually notwithstanding the bog. Poles help bounce and jump but even with those it's shitty. So glad we went the other way around.
Got to bike, cycled up to car, passed a couple of Invernesians that we had seen earlier so told them I'd pick them up on the way back. Mr Grizzly was just coming off as I arrived at the car so chatted with him some more, seems he's had few nice weather days so was buzzed about his day. 5hrs 2mins at car, not bad at all for the day. Drove back with the couple I promised a lift to (their bikes were at the other end) and got back to find kids who had got to the bottom just a few mins before. If only Carlsberg did munro days ...........

Great tip, thanks. Much better to use a good track to go up rather than down. We did it well within the time limit, but it would have been close without the bike back up the glen to get the car. I understand it's a private road and we are grateful to get to use it, but the time limit seems a bit churlish - I'd be happy to pay a fee for the privilege of using the road and having a bit more time to enjoy the walk.