Firstly, to get the story up to date and the politics out the way. A virus called Coronavirus, sprung out of China it seems and has infected the world, causing a filthy disease called Covid-19, among other things. A means to reduce it's deadly effect, isolation of households,called "Loch Down"

was finally implemented to protect us. After a long wait and many thousands of deaths, we finally got the go-ahead to end our captivity indoors, although the disease is still circulating in our midst. I would like to thank all who followed the guidelines!

So, at last the chance came to hit the hills again, with Big Jesper and Lawrence, who was accompanied by good pal, Davie. Our choice was Gulvain, still coming within the radar screen of day trips, although my darling wife, gave me the ok, to travel north for an overnighter and hills the following day. Who am I to refuse?

Anyway, back to Gulvain and as usual, Jasper couldn't let us have even a wee lie in, as we all aimed to rendezvous at Bridge of Orchy at the back of 6 - yes - a.m! Forecast had been looking a bit iffy, but final reports looked no' bad! Had barely got parked up before the recently started drizzle turned to rain. "Won't last, we'll just get the bikes ready!" Words that will go down in the annals of infamy! 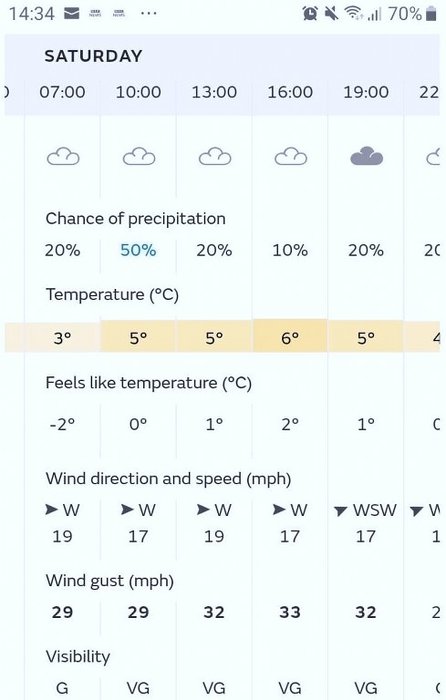 How it should have been! Ah, well, they can't get it right every time.

So, off we skipped about 8 ish, but it wasn't long til the rain got worse, as did the gradient of cycle. We were all in great shape after months sitting on our arse eating and drinking, so it was a major surprise to see Davie dragging up the rear. Surprise changed to alarm, when he reeled off all the symptoms of cardiac arrest and the signs seemed to suggest he wasn't kidding! Jaf and Jimbo, having some medical expertise soon had to urgently check their bikes, leaving Lawrence to manage the situation expertly 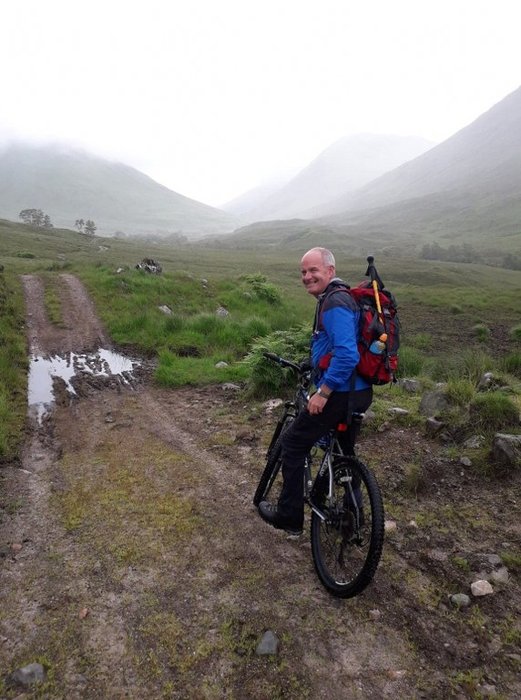 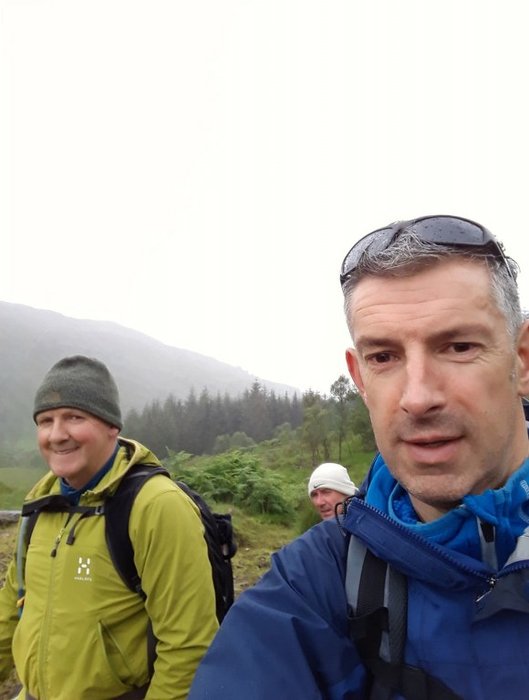 Threats of depriving Davie from his summit half, soon revived him and the lads resumed the canter up the pretty Gleann Fionnlighe, now that the worst of the gradient had been taken care of. The rain persisted and we still had a few boggy, or rocky bits to get through, but it was good fun. Took us just over the hour to the bottom of the hill, including our audition for Casualty 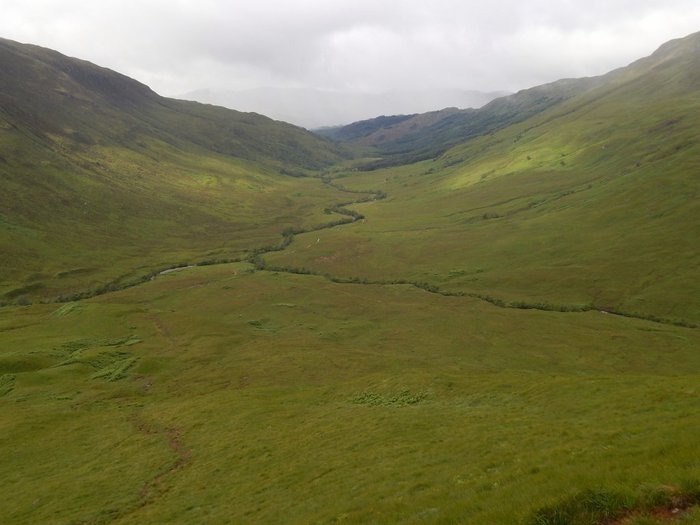 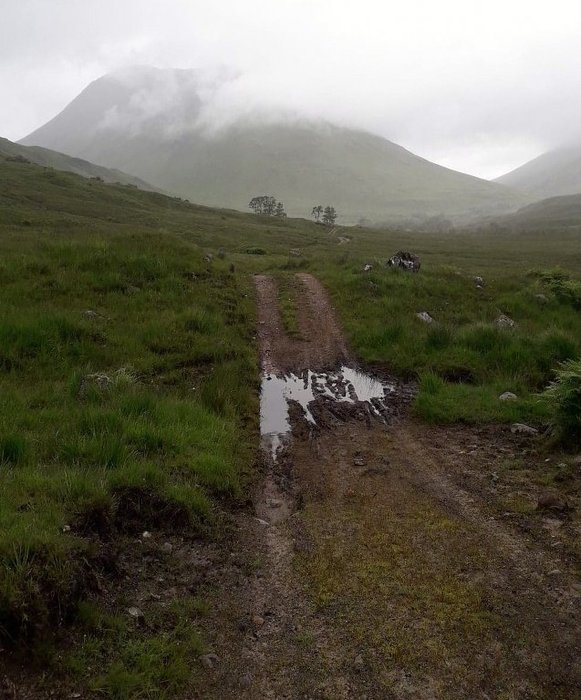 Alas, the hills were still shrouded in cloud and no sign of the rain abating - "it won't last!"

No point hanging around, despite the disappointment. It gave us plenty to talk about on the way up, as to how the Met Office and MWIS could be so wide of the mark, along with what we all had been up to since our last travels together. Some things hadn't changed, Jaf and Lawrence could still play the bagpipes with the wind blowing from the backside

My efforts seemed feeble in comparison! David, bringing up the rear.

It's quite a steep and prolonged haul up to the first top, with more than a few false dawns, but we got there. Once or twice, the view even opened up for a second or, more, but that was all. By this time the wind was giving us a good buffeting too. That was one thing MWIS had just about got right, gusts of 30-40 mph. Maybe they knew Jaf and Lawrence were heading out? Actually doesn't look too bad. In reality wasn't too nice! 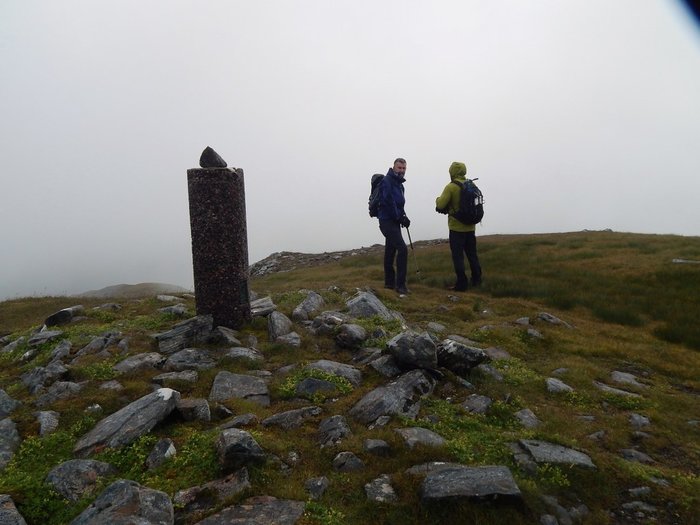 Lawrence and Big Jesper, take a breather at the first top. 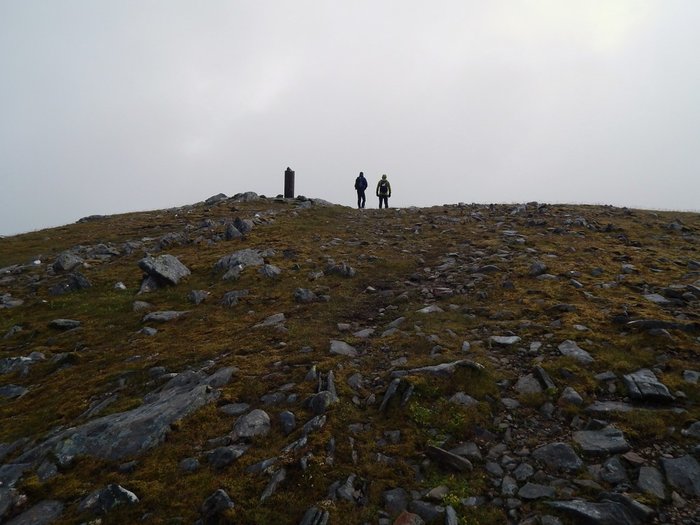 Reaching the trig point. after a few false dawns.

Anyway, this was no time for joking, so we marched onwards along the ridge, before finally getting to the summit, just in time to see Jaf finish his third course (of five!) We didn't hang around ourselves, taking few pics, scoffing some food and fluids, but notably Davie's offer of a dram, was declined, due to the severity of conditions. Yes, truly a day for the record books! Hopefully, it won't go off and we will get the chance to sample in more ambient conditions one day, David! 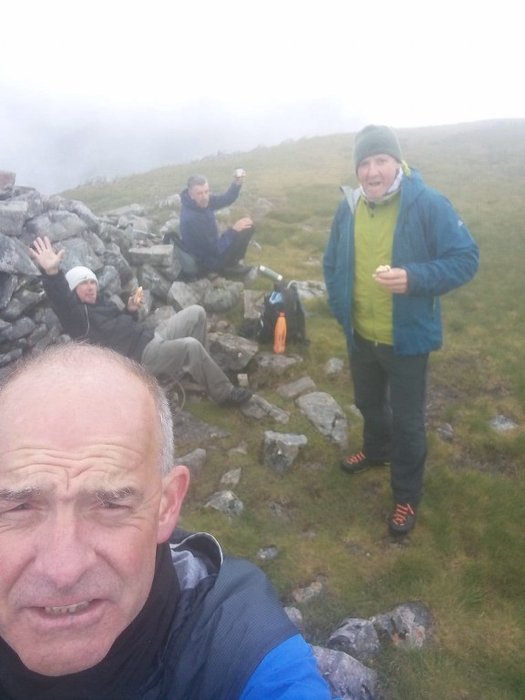 Spirits still high. Or high enough to eat the grub, but not enough to hang around for Davie's dram :( 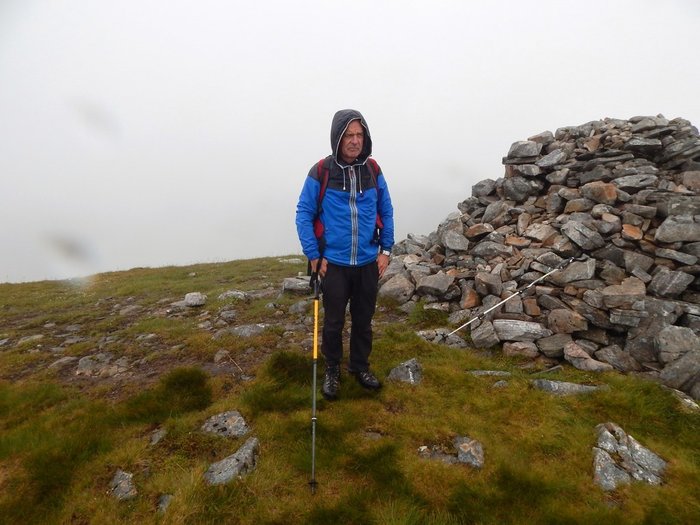 Happy as Larry. Me. 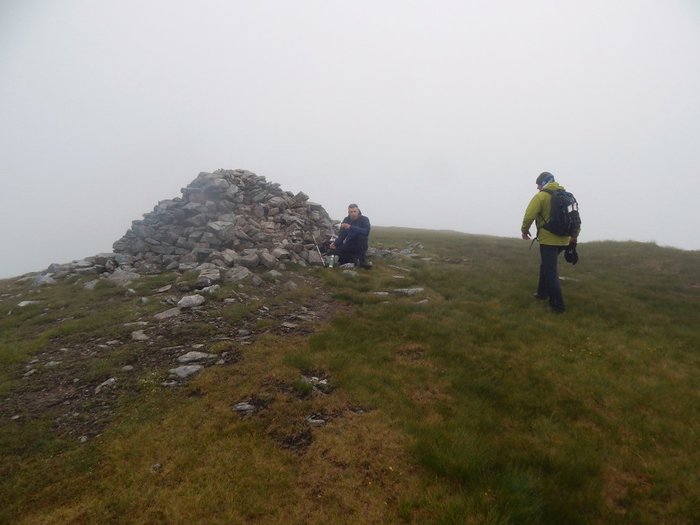 Refreshment break nearly over for Jaf, as the rest of us arrive :) Oh, what could have been! As tends to happen, having done the job and conditions being so miserable, it was heads down and let's get outta here! We all got a bit strung out on the steep descent. The call of beer from various quarters had nothing to do with it. The cycle out was going swimmingly well till a technological malfunction near threw me over the handle bars. How I managed to get a stick stuck in the derailleurs, I don't know, but it near de-railed me! Fortunately, we were well down, so apart from a couple of more hiccups with it, didn't matter too much and we were back at the cars in about 6 hours. Sgorr Craobh a'Chaorainn, centre. Sgurr Ghiubhsachain, twin topped one to the right. Loch Shiel hills, as we head for home. 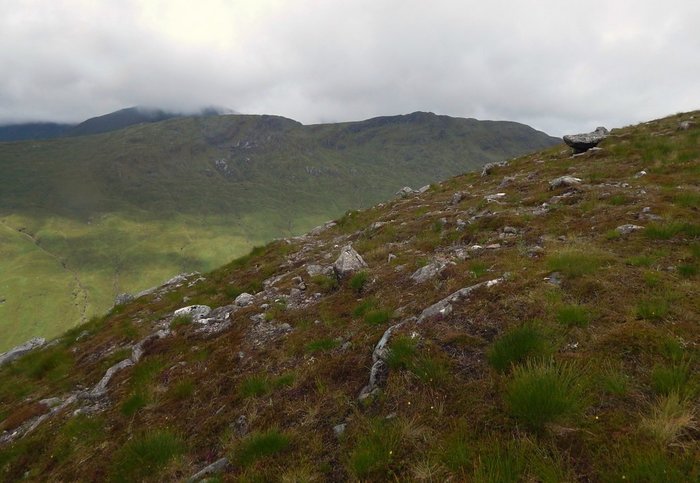 I think that's Streap, at the back. 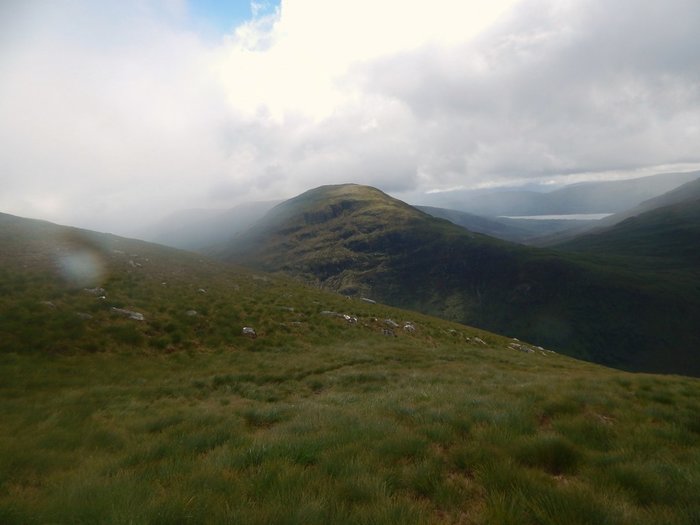 A damp view through to Lochiel. A brief glimpse of blue sky as we retreat. Alas, Davie was a bit behind, so we never got the chance to say cheerio, so "Cheerio, Davie, hope you enjoyed your day with the dafties and we'll take that dram the next time! Please."

Good report once again Jimbo. Thoroughly enjoyed the day and the craic was as always brilliant. See you in Torridon in 2 weeks time. PS Remember that bottle of malt

Big Jesper wrote:Good report once again Jimbo. Thoroughly enjoyed the day and the craic was as always brilliant. See you in Torridon in 2 weeks time. PS Remember that bottle of malt

I'll take along a six pack, how's about that!