Grahams included on this walk: Scaraben


Having visited the Eagle Rock crash site, we drove the short distance to Braemore, where we took the last available parking space. It was already past midday but we expected we should be able to finish the circular in 5-6 hours, so we had more than enough time to climb Scaraben and visit the second crash site.

The best way to traverse Scaraben is from east to west, starting from East Scaraben and finishing on the western top (also known as Sron Gharbh). There's some wet, tufty ground to cover, especially on the descent from the final top, Allt Aoil could be a problem in spate, but walking along the wide, rocky ridge of the Graham makes up for the tough going lower down. That is, if you are lucky with weather, which we were not

Track_SCARABEN 13,9KM.gpx Open full screen  NB: Walkhighlands is not responsible for the accuracy of gpx files in users posts
It all started rosy, with nice weather at the beginning of the walk: We followed the track along Berriedale Water for roughly one mile... ...before leaving the river and aiming up the wet meadow, with good views towards Maiden Pap:

We gained maybe 150m when the first sharp shower arrived from the north-west. Thankfully, it only lasted 10 minutes, but we suspected more bad weather was to come later, so we picked up the pace, to find and photograph the crash site before the next shower arrived.
Kevin had grid references for the impact crater, but we expected to find small pieces of metal lower down the slope, as they are often moved downhill by wind, rain, melting snow or, sometimes, stupid people who think that kicking them about is funny

Kevin investigating the ground around him:

A short, sunny window of weather allowed us to enjoy the views to the north... ...as well as the shapely peak of Maiden Pap:

Also, looking for plane parts meant we appreciated the little things on the ground which we usually overlook. Like cloudberries... 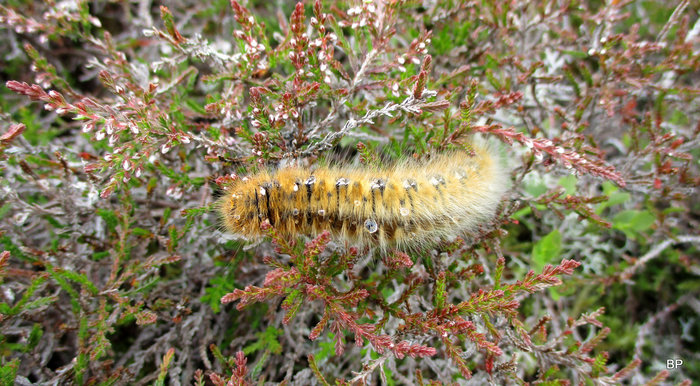 The first metal pieces we located at about 450m just west of the Dubh-allt. Small, mangled bits of aluminum, most likely from the main fuselage: Brace for impact! The rain is coming! We stopped to dress up in waterproof jackets. Kevin noticed that the temperature has suddenly dropped - it felt more like October than July once again. What is wrong with summer this year???
Kevin taking a break to adjust his boots just below the summit of East Scaraben:

When Kevin was fiddling with his boots, I climbed a few more steps towards the first summit and suddenly I came across the impact crater. The site is not visible from the far distance, as it's well hidden in a small dip in the ground, so I was surprised to find it so quickly: Kevin soon joined me and we stood there, gazing into the big hole in the ground. Holy c**p, I thought, the plane must have hit the slope at full speed to create such a scar! Surprisingly, it seems that the "crater" might not be the impact site at all, according to Highland Historic Environment Record:
"The bulk of the remains have been dumped in a shallow depression which may be a small crater resulting from a detonated depth charge. The debris spread lies mostly within a 100m radius of this point."
The crater seen from above: I found a detailed report describing this crash site here. Also, the site is described on Peak District Air Accident Research blog. Sadly, it doesn't appear in "Aircraft Wrecks, the walker's guide".
The accident happened in the early hours of the morning on the 1st of May 1941. The plane, a Whitley Mk.V P5070 / WL-B of No.612 Squadron, was returning from an anti U-Boat patrol to the base in Wick when it flew into the northern end of East Scaraben. The crash site was located the next day. The whole crew apart from the pilot had been killed on impact. The pilot was found alive but sadly, he died as a result of his injuries the following day.
What happened? We can't say for sure. It was speculated, that the wireless equipment in the Whitley might have failed because the base at Wick couldn't contact the plane as it was returning from patrol. But did the crew have another, more serious technical issue which made the aircraft unreliable? Or was it just a pilot error? Maybe weather conditions had something to do with this accident?
A small piece of fuselage lying at the edge of the crater: Mangled wreckage inside the crater: We had a sombre moment standing next to the impact zone, reflecting on the past and saying a quiet thank you to those young souls who risked their lives during the big conflict. This particular crash site doesn't have a monument like the one we saw on the Eagle Rock, but sometimes our own memories are the best memorials.
We left the site eventually and headed for the top of east Scaraben. When we landed by the cairn, I noticed that the weather wasn't joking!
Armageddon is coming!

The summit of Scaraben was so close yet so far. We knew that by the time we get here, it will be wet... wet... wet!

We adjusted our waterproof overalls and started descending to the col between the two tops, when the shower hit us with its full speed. We marched on, desperate to at least touch the trig point, which we managed (just about without falling over

). Of course, no summit views, the only photo I managed to take features the trig point and the edge of Kevin's goretex jacket. The shower lasted maybe twenty minutes and by the time it passed, we were on the next col, leading to the western top of Scaraben. Because we had no views from the true summit, Kevin voted for visiting this top as well. Why not, it doesn't add much ascent/distance to the circuit. Photo session on the eastern slopes of the 609m top, with the summit of Scaraben now cloud and rain free: Is it just me that noticed the similarity between Maiden Pap and the Devil's Tower from "The close encounters"?

The last top was clear but bloody cold. Can you believe this photo was taken in July? We spent some time at the last top, taking photos and drinking hot tea, before we spotted the next shower charging towards us:

The descent can be a nightmare in wet conditions. We were lucky the next shower only caught us for a few minutes. Kevin was moaning a bit about his sore knee again. Bog-hopping didn't help him much 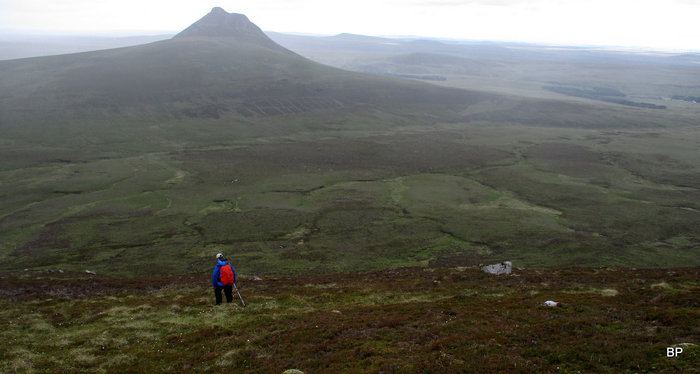 After what felt like a neverending trudge over wet, lumpy ground we eventually picked the Corrichoich track which led back to the car park. In good conditions, this route is only a half-days walk and the other "weirdos" can easily be added to make a full traverse of the Caithness hills. But even despite Scaraben being the least weird of the bunch, we still enjoyed it as a "solo" climb.

There is more to find in this area when it comes to lost planes, so we will definitely return to discover the other scars and secrets of Caithness.

Re: Scars of Scaraben part 2

Great photos. My Dad distrusted Whitleys - and didn't know a single pilot who liked them. They had a reputation for being hard to fly and unreliable.

Re: Scars of Scaraben part 2

Enjoyed Part 1 and have just finished reading Part 2 - both very interesting and you have a great knack of finding intriguing objectives for your walks. We holidayed in both Helmsdale and Brora back in the early '70s but never got round to exploring the area properly - cheers