To set up camp high on a mountain, watching the sun set over the horizon and be one with nature is one of my favourite parts of a mountain walk. It’s the freedom, the remoteness and sounds of the nature which gives me an instant calm and escape from the stresses of day to day life.
It also takes the time pressure away of climbing a mountain during a certain time, getting back before darkness and especially right now, avoiding crowds.
I do like a late start, but setting off at 18:30pm was late even for my standards.

However, we had visited family during the day and to spend the night in the mountains was a great way to end the day. The car park which marks the starting point of the walk, was still pretty busy for the time of the day. I guessed that with the heavy rain during the morning many people had simply started later. We shouldered the backpacks, locked the car and started to walk towards the House of Mark. Glen Mark is very pretty and the first few kilometers towards the Queens Well are pretty much flat and follow a great track. During the first part of the walk we saw lots of freshly sheered sheep happily grazing around the bog myrtle and startled a family of guinea fowls who loudly recorded their annoyance when we walked by. 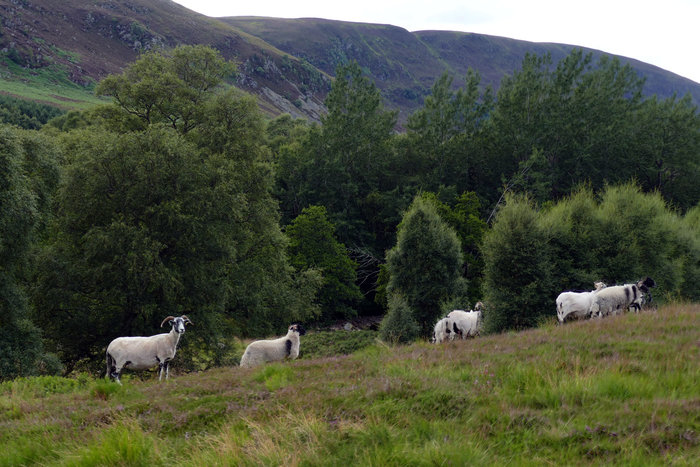 Sheep on the way 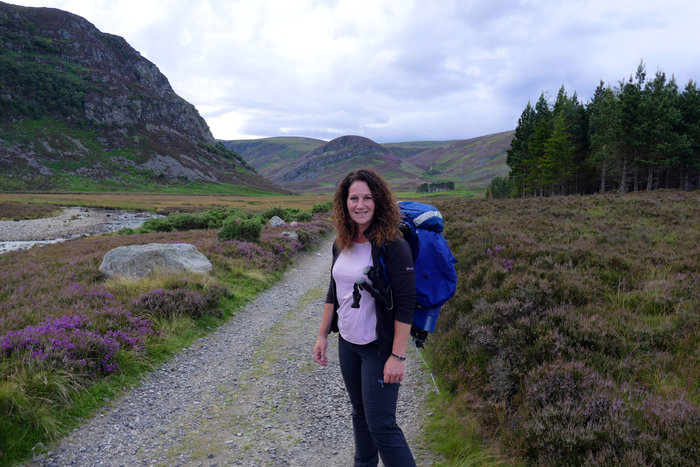 The sun was already low in the sky and highlighted the blooming heather, which appeared even more purple and nearly had me bursting into the famous song.

It was a stunning evening and the heavy showers during the day were a distant memory. Lucky for us a breeze kept the midges away and warm air meant that I we were able to leave the jackets in the backpack.
A few late walkers on their way back to the car crossed our path and we shared some short stories or a friendly hello while we continued our way up the hill. 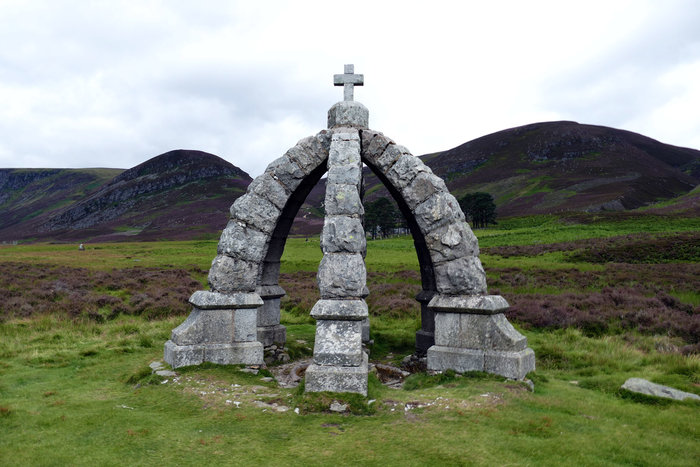 Shortly after passing the Queens Well the path started to climb up the hillside and walking became a bit slower. With only a little food needed, we had our backpacks down to 12 kilos which is quite comfortable to carry, but still slows you down a bit. Below the valley was cast in dark shadows , but ahead the sun was still illuminating the countryside. With the last steep climb completed we saw a cairn in the distance, which marked the start of the plateau. We walked towards it and when we reached it took a breather and checked the map. 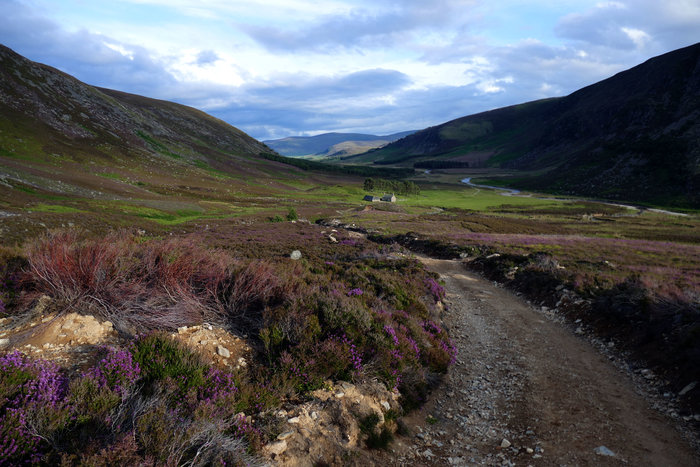 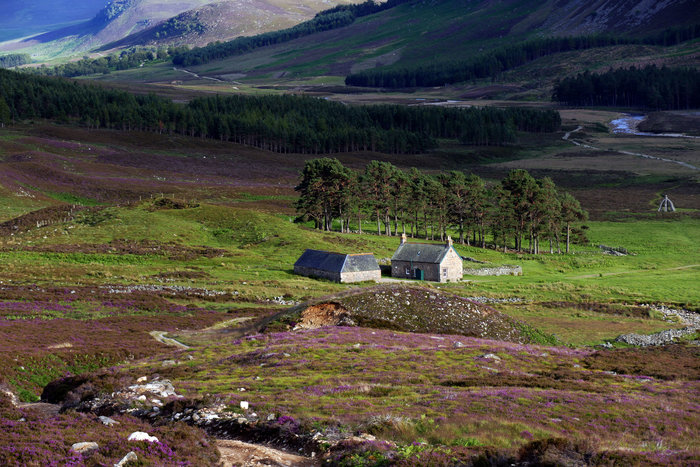 In the distance the peak of Mount Keen was rising cone like, but we wanted to find a camp spot on the plateau. We left the path and walked towards the Knowe of Crippley. The burns on the map had pretty much dried out, but had left some great grassy spots, which was better than camping on top of the heather, which was spread all around us.
Once we set up the tent, I set of to explore the area and catch the sunset. I walked the short distance towards the top of Knowe of Crippley and enjoyed the peacefulness of the area and the view towards the setting sun, which was minutes away from disappearing behind the mountains in the distance. Orange and purple clouds coloured the sky above me and small peat bogs reflected the clouds perfectly. 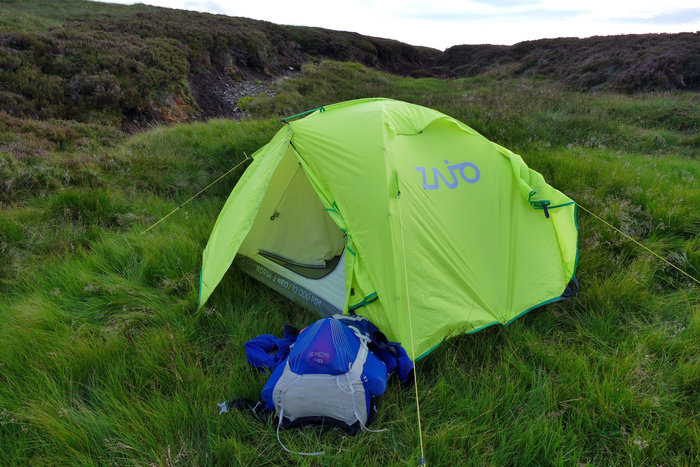 The tent is up 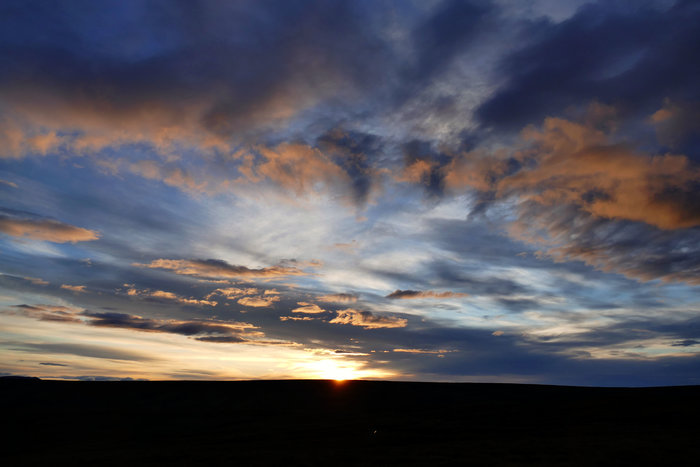 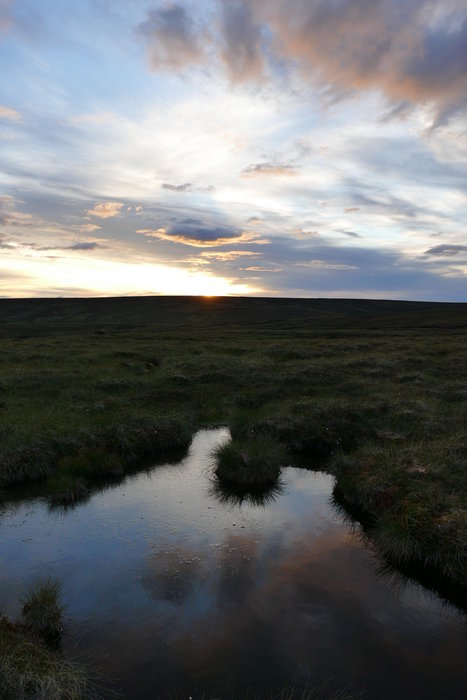 
Wild camping has gotten such a bad name lately. Unfortunately, a shocking photo of left rubbish attracts more views than one of a tidy camp site and is maybe the wrong thing to share. Leaving without trace is the secret and maybe we should start before and after pictures to combat the bad negativity…after all most wild campers will adhere to the wild camping code and would be unable to leave a mess in the countryside they love.

With the sun set, I returned to the tent and went on a search for some drinking water. I followed the dried out burn down and got lucky when wet patches of grass indicated that water must be close by. The sound of trickling water, made me find a source hidden deep in a burrow of grass. Kneeling down it wasn’t much, but enough to fill my pouch. More than once I had praised my new water filtering system, which meant that I was able to filter and drink water, which I usually would not have touched. Worth the investment and it’s so lightweight that its easy to carry along.
Returning to the tent I noticed that the sky now illuminated the clouds in a deep crimson red and grabbed my camera for some last photos. 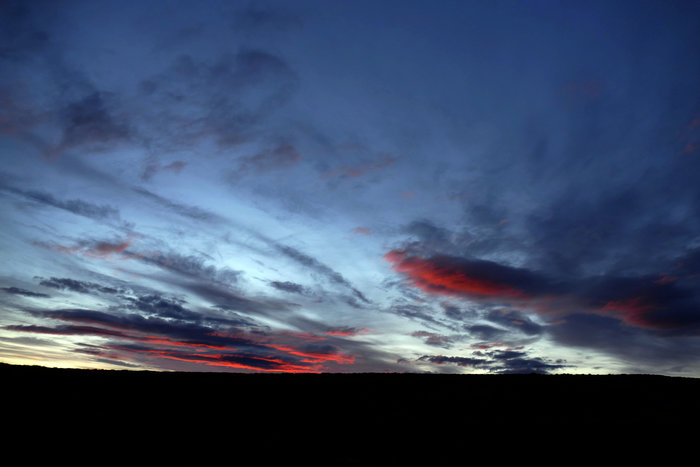 It was cold when I returned and changed into my sleeping gear, I kept my fleece jacket on and stuffed my down jacket into my sleeping bag for some extra warmth throughout the night.
I woke just before 7am during the next morning. Early morning sunshine has warmed the tent up so much, that I needed to open the door and was greeted by a blue sky. I woke Kevin and we got up had some porridge and once dressed took a leisurely walk up to the summit, which was only a short 30 min away from the tent. The views all around us were fantastic and enjoyed the morning walk only carrying a camera and water bottle. When we reached the summit we chatted with another walker who had walked in from Glen Tanar and camped down that side. Sharing some mountain stories and taking pictures, we stayed until the wind picked up and made it too cold to linger any longer. We returned to the tent which indicated its position as a bright yellow dot. View back towards the tent Us at the summit

Taken the last few steps down the heather towards the tent, I came to an abrupt stop when I spotted my first Adder sunbathing in the warm sunshine. How cool was that! I quickly shouted Kevin over and took some pictures. However the Adder had spotted us and while I inched forward to get a better photo the snake disappeared in the thickness of the heather. I did not mind as I finally saw my first one and hopefully it would not be my last. Back at the tent we had a second breakfast and started packing up. With everything stored back in the backpacks I looked back at the spot we spend the night. It was left the way it should…without any traces minus a few flattened grasses, which would recover during the next day or two. Leave without a trace

We retraced our steps from the previous day and were back at the car part by noon. What a great time it had been and I am already looking forward to the next trip up high. The purple walk back Looks a great trip! Always good to see a sunset or sunrise report and even better with the purple heather thrown in.

Looks like it was a great overnighter, especially with that stunning sunset.

But that pack looks suspiciously small - I remember many reports featuring a Mountain Love carrying a pack big enough to have contained a fitted kitchen!!! Is someone else doing the heavy lifting these days...???

@Alteknacker: I realized that sharing the size of a tent makes a huge difference! What was once stuck outside the backpack, can now we squeezed inside (resulting of multiple squashed biscuits, but it fits) I also removed some of my usual layers I take during colder days. Would love to get down to 10 kilos, but that would mean buying ultralight gear and probably cutting down on bars of chocolate

As for someone else carrying the heavier pack...proud to say pack wise we carry the same weight