Another Sunday outing for us and the usual problem of where to go. The forecast was OK during the week but as the big day got nearer the forecast got worse. On Saturday the forecast was to put it bluntly awful, proper doom and gloom and we questioned as to whether we should be heading out.
This week it was my turn to drive and following on from last weeks tough shift I came up with a couple of hills that are superb but still require a bit of effort. The obvious drawback is the distance and time spent in the car.
I suggested breakfast at the recently re-opened McDonalds at Broxden and George & Parminder were drooling and dribbling at the thought. However as we were out on a Sunday opening hours are slightly different, basically they don't open until 7am.
I arranged to meet at our usual place at 6.30 and then we could saunter up motorway and be the first customers.
The journey up the A9 was uneventful as was the rest of the drive and we would be on our way at about 10am,


our_route.gpx Open full screen  NB: Walkhighlands is not responsible for the accuracy of gpx files in users posts
Naismith who is obviously a 'fell runner' can do the same route in 4hrs, must be 'real' super hero

I think you can guess what the conditions are going to be like, just look at the puddles on the road

The way ahead, just across the road

Would be good for hide and seek

Parminder eventually appearing out the shrubbery, maybe he got lost in there?

The first on many water features

A wee bit higher and it looks pretty threatening

Looking back down to the undergrowth, there is a track on the left but it doesn't go very far

Told you the track doesn't go very far, definitely not worth following it uphill

So far so good weather wise, but that doesn't look very clever

George waiting patiently and getting his breath back

Parminder head down and thinking how good his new poles are, they have had a few outings now

Loch Quoich from higher up

Taking in the view

It really is a stunning view

George standing looking at the sky in disbelief, is it really blue?

Looking east towards the dam on Loch Quoich

Our first view of the bridge, way below

Loch Quoich and the bridge from higher up still

Looking across to Knoydart

2nd summit in the distance

Looking down on the estate of Alltbeithe in Glen Quoich

We ventured off the path as it started to go down and kind of in the wrong direction, but would soon turn right 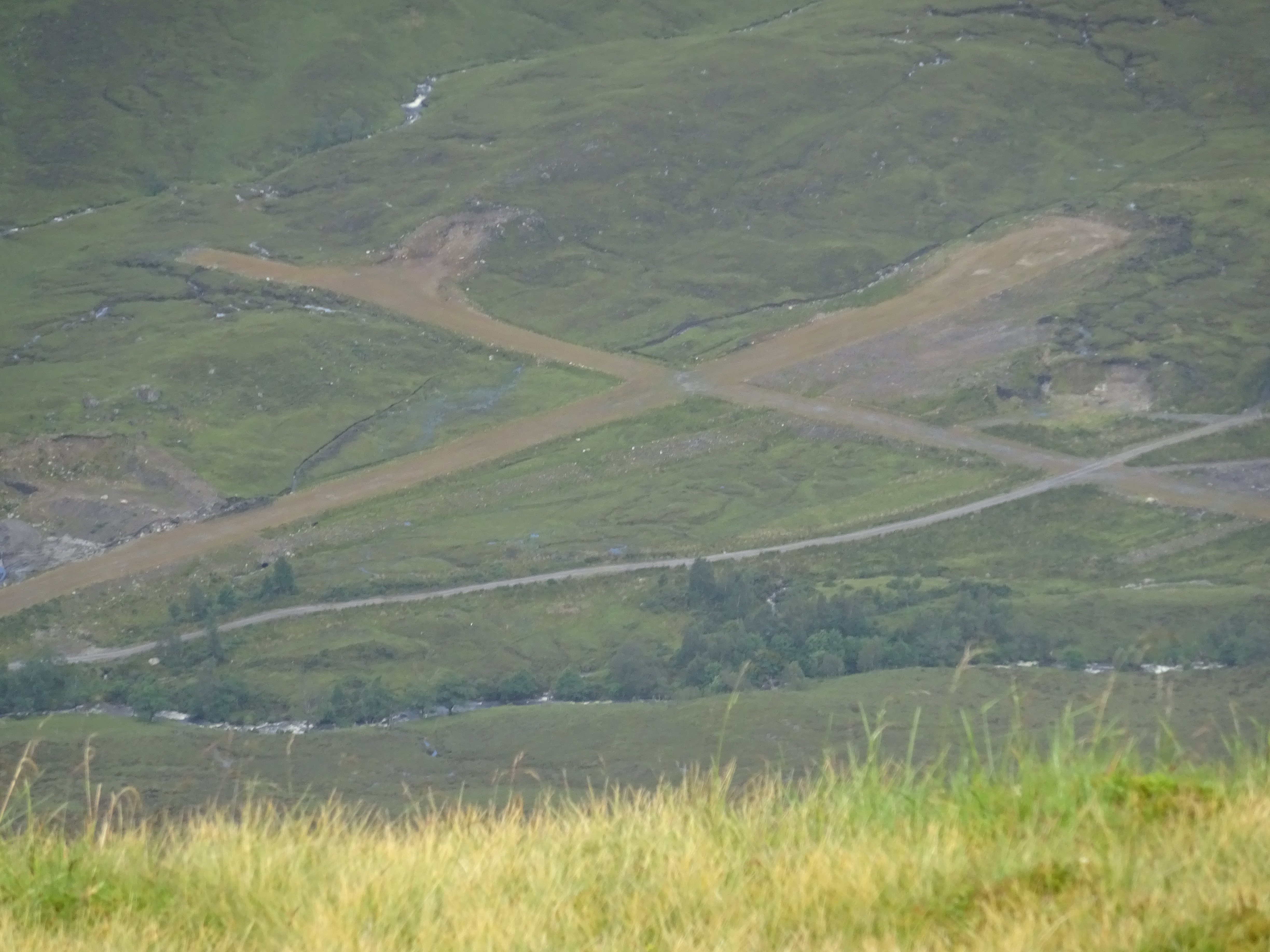 The shadows off the clouds on the hillside are impressive 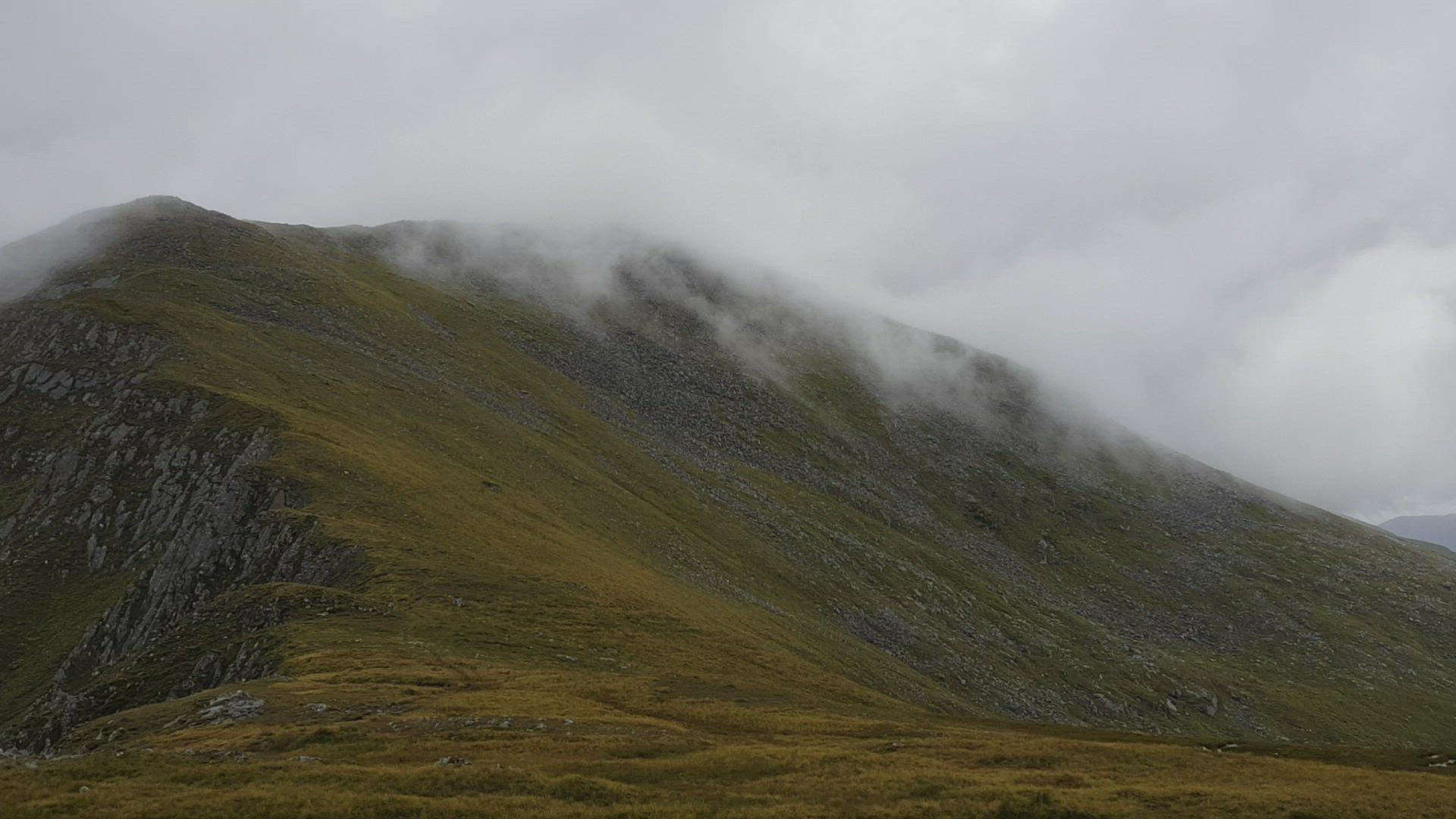 A video mainly looking out to the wild west

King of his massive castle

West across to Knoydart

The other end of the Ridge

Parminder posing on the summit, looking a bit dreich 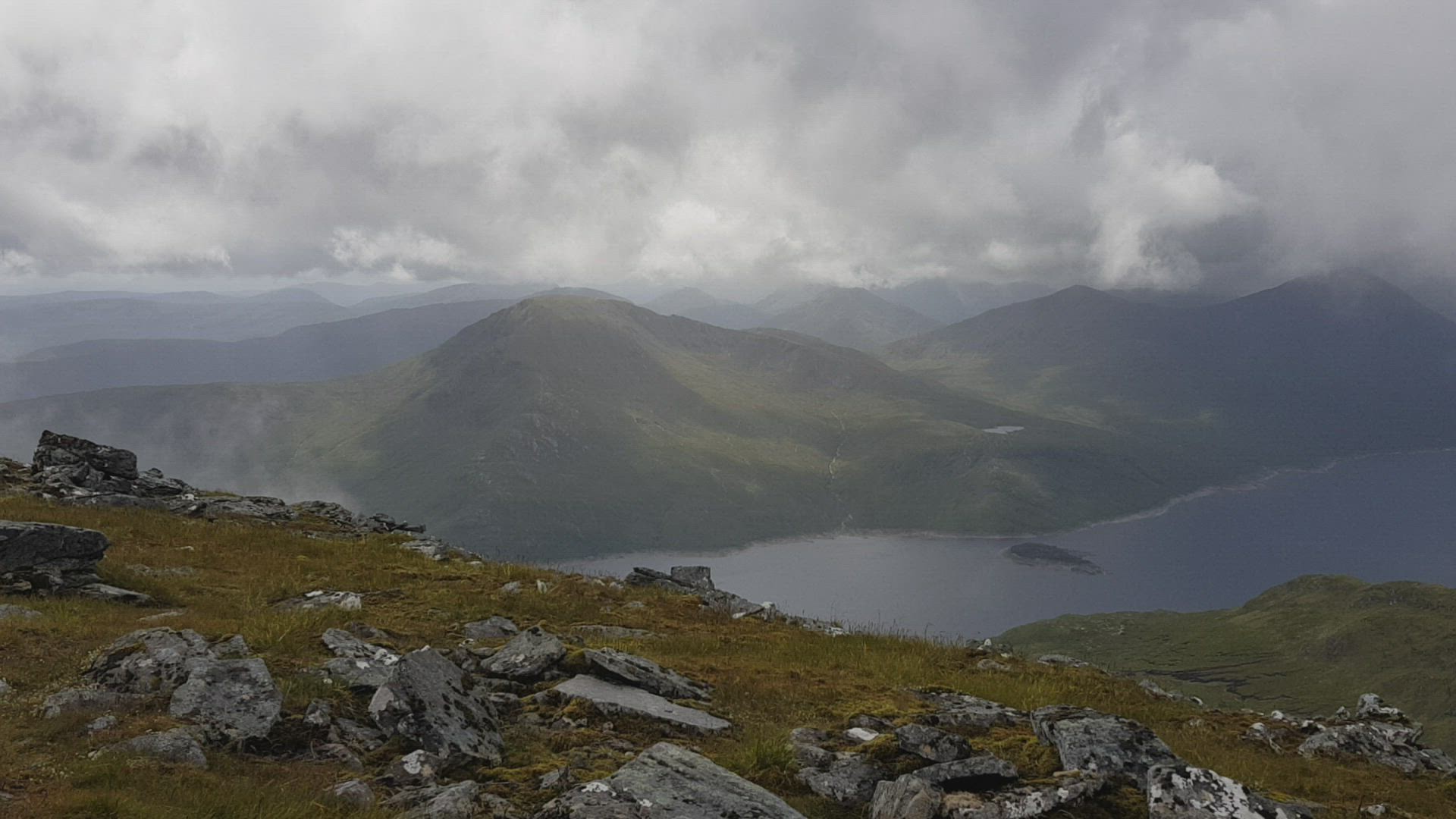 Video on the summit of Gleouraich

Our second target engulfed by cloud

Just after we started descending the grotty weather that had been forecast appeared, the grottiness continued almost to our second summit. The wind also picked up and luckily it was a westerly and was behind us. That is one of the reasons there aren't many photo's between the two summits.

Loch Fearna in the foreground, descent route would be this side of it

Not a bad lunch spot, cracking view behind

A cracking corrie on the ridge, never noticed it when I was on it

Looking SW from the summit area

Summit area and my two chums

Descending now, heading to the right of Loch Fearna

The descent was mush and more mush

Looking up to our descent route off the first summit

George leading the way through the mush

George did these two hills fairly recently (in the grand scheme of things), in the same direction and the plan was to try and pick up a hydro track for the lower part of the descent. Unfortunately when I did these two I did them anti clockwise and in snowy/icy conditions so paths were invisible.

The other side of the dam

Is that a super hero in the distance, we are now on the track back to the road

The track gets a tad steep, luckily in the right direction - down

George wasn't able to multi task, laughing and walking is difficult - that is the end result

The track down and ahead, nice view again

This is "the official" start or finish point

Another cracking day out which was rounded off with a fish supper in Pitlochry. As usual Pitlochry was busy even at 6.30pm, the good news was the fish and chips were the best we have had in the last 3 weeks.