g49.gpx Open full screen  NB: Walkhighlands is not responsible for the accuracy of gpx files in users posts
After the Brothers yesterday I'd planned on a rest, but the weather looked decent so I couldn't really let it go. And sitting here now on Wednesday with it having poured down all day, it was a good decision!

So a quick pack of the gear and make some sandwiches then off up the glen. I intended to park in the layby as indicated in the WH route description but this is closed for tree felling operations (later when I started the walk I couldn't get out of my head the Irish joke about tree fellers wanted. Sorry). So I drove on a few yards over the bridge and stopped at the start of the track on the left. I got out to look around for parking, back on the other side there was a car parked in a small tarmaced area and another car pulled up there as well. I thought it was getting a bit busy for the hills! They'd taken all the space there but just up the track a bit I could see a level patch so drove up the slope and parked there. The guys from the cars weren't walkers, they were peering across the loch through their binoculars, looking for fowl I suppose. Then I fell foul of the rules.

Kitted up, I'd just started walking down the road when a Landrover stopped. The 2 tweed-dressed gentlemen advised me that where I'd parked was used for turning, please find somewhere else. So back to the car and I put it on a wide part of the verge just back over the bridge. Nearer the start of the path I suppose. Now Paul, in the walk for A'Chralaig it mentions an alternative parking space - the spot I originally parked at. So this is your fault again even though I only read the report later! Sorry only joking.

Can't really see it would have been much bother there anyway.

I took this photo from the end of the track, the route is up the slope above the forestry, Ciste Dubh is in the distance. Looks a lot closer than it felt by the time I'd got there. Finally then, at 10.30 through the gate and off up the path. This is fairly steep again but the path helps a lot. The slope is fairly even, the path zig zigs a bit and passes the top corner of the forestry. There was no wind, I was overheating so stripped down to just the base layer top (kept the trousers on of course!). 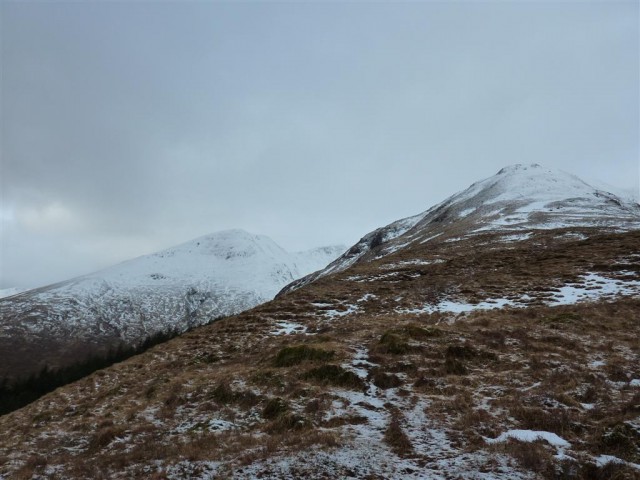 There is a short respite in the slope, it then steepens quite a bit to the top now just ahead. A look back gives great views with the height having been gained quickly, Cluanie Inn bottom left. No rain or snow but still not much colour to be had. But of course this is a false top, you're not on the ridge yet. No, this is now ahead oh joy. At the top there is a small cairn and a view ahead, you feel as if you're getting somewhere. And there is a great view back down the ascent route and Loch Cluanie. That's around 500m of ascent out of the way early on so I was lulled into a feeling of satisfaction, to be regretted later. Moving on, there is a dip and further rise then I was able to bomb along the ridge. There was soft snow and no ice so crampons weren't required. This is a decent ridge for easy walking. The drops to each side are steep, particularly to the east. I had some views at last, cloud staying above the tops for a change. A final charge and I was up the slope to the summit. It was a bit windy here and felt immediately much colder so on with the jacket. Out with the camera for some photos of views!

I just don't believe it. I'd misread the one bar to mean used, not remaining. Sitting back at base is a fully charged spare, fat lot of use there. What a ****.

I felt rather deflated at this point, the thought of no more photos, and just when I could see something! I even thought of turning back. What's more the wind started to get up again.

But no don't be silly, let's move on. The summit is perched on the north end of the ridge and it's a fairly uniform and quite steep slope down the the bealach. Fast progress though in the soft snow, being perfect for planting the heel and still no ice about. The bealach was soon reached and I stopped for lunch. I found a good rock seat and it was even completely out of the wind. I found it to be a depressing place, even though I was enjoying eating. The slope I'd come down looked ok but the way ahead to Ciste Dubh just looked like it was going to be a grind, a steep, wide and uninspiring route to have to take. And here you're way down at below 600m, with another 400m of ascent to come in the 2km. Groan!

Eventually I resigned myself to it and pushed off. The path soon disappeared under the snow so I just chose a zig zagging route, aiming for a boulder, or the edge of a bank of snow, whatever I could find to take away from the tedium. You do eventually reach your goal of course, and after a deal of slogging in the soft snow and a final steep section at last I could see ahead. Inspiration renewed! The little peak of An Cnapach looked like a spike from below and had a decent snowdrift and cornice to its edge. From where I was, to the right of the slope, I couldn't see the slope to the left at all, just a snow bank. I got the ice axe out and climbed up the snow which was very soft, sinking up to my knees. The snow bank was only a few metres wide and I could now see down the west slope. I climbed up the snow to the pointy top (or as near as I could get with the cornice), and a view ahead to Ciste Dubh. This little peak, and the rocky section beyond, are simply the top of a line of cliffs that lead to the Munro but it looks just great, vertical to the right and steep to the left. There were a few bites out of the cliff and a sagging cornice. If only I could take a photo. Then I had a wheeze, I took the battery out of the camera and warmed it in my hands for a few minutes. Into the camera and just enough juice to get 2 shots. This of the line of cliffs with the Munro summit ahead. Then towards the Five Sisters, all looking very bleak. I could see the cairn on Sgurr a Bhealaich Dheirg that I'd been on yesterday, and all of the Brothers ridge I'd gone along. To the east the summit cairn of A'Chralaig stood out and I could easily see the pinnacled section out to Mullach Fraoch-choire. That was the last of the few photos for the day though. I pressed on, keeping as high along the edge as I could. The rocky cliff section came to an end, the clamber had been very enjoyable and made up for the earlier slog. Just a gently rising section now where there were traces of the path that had been blown clear of snow. From here I could see up close the prominent gullies that face south. I stopped for a moment below the final rocky rise to the summit, I was feeling fairly tired now. As I started carefully up the final stage, avoiding the odd patch of ice, the wind really rose in strength and started to blow snow about. It was from behind so wasn't too bad for now. I reached the summit in a gale but stood there with my back to it for a few minutes, just looking around as I like to do. Time to go, turning into the wind I got a face full of blown snow. For descent I'd planned on heading into the glen to the east - should I go down the east ridge from here and keep this wind behind me? But it would land me further up the glen. I stopped and turned away for a moment but in the end just carried on down the rocky section as fast as I could. Snow was being blown high all around me, and down the slope to the north, strangely though I couldn't see any of the other peaks being affected. Maybe I was being singled out for attention by the weather gods!

Not far down I was out of the worst of it and able to continue more normally. Back over the cliff top but now I contoured on the bypass path below An Cnapach. It probably would have been faster going over the top instead of the banked out path.

Just south of here I headed ESE, straight down the slope to the glen, aiming to the left of a big gully and stream coming in from the right so that I'd be able to cross the stream in the glen where it wasn't so wide. I used all the snow-filled ditches I could find to speed and ease the descent. Lower down I went through an interesting moraine area that was cut through by many gullies. Back to flat land, I headed to the stream that here was in a small gorge and was able to cross easily at the end of the gorge where there were ramps leading down then up again on the other side. A rising traverse soon had me on the track that leads through this glen for an easy walk back to the car, taking in how steep are the slopes around.

It's odd, I'm not superstitious in any way but in hindsight it had felt a bit eerie on Ciste Dubh, maybe it was just tiredness. Or the wind waiting for me at the precise moment I reached the summit.

love your report and pics, even if there aren't as many as you intended (we've all done it

) at least you had the good sense to warm the batts and grab a couple more shots. Thanks for posting

Really enjoyed reading your report and the pictures are great Yokehead. I find that where ever I'm eating, despite the view, is where I'm happiest

Excellent report and those pics really portray the feeling of a cold winters highland day in the hills. That is a common problem with digital cameras, they just can't take the cold.I keep mine tucked inside my jacket, in a padded case, and only bring it out briefly to take a photo.