Carn na Caim and A Bhuidheanach Bheag2.gpx Open full screen  NB: Walkhighlands is not responsible for the accuracy of gpx files in users posts

Dalwhinnie - I love your whiskies but your munroes are a tad underwhelming!

For my first "new" munroes of the year I fancied something that wasn't too big a day out and these two looked fairly straightforward on paper. I set off from Glasgow around 7am and was ready to head for the hills by about 9am - the lay-by was fairly empty, maybe three or four cars.

Once over the A9 head north for about 100m and then turn right onto the track that will take you most of the way up into the hills - there are a few tracks branching off but just stick to the one that heads uphill and you can't go wrong, it's clearly visible as it winds its way up. 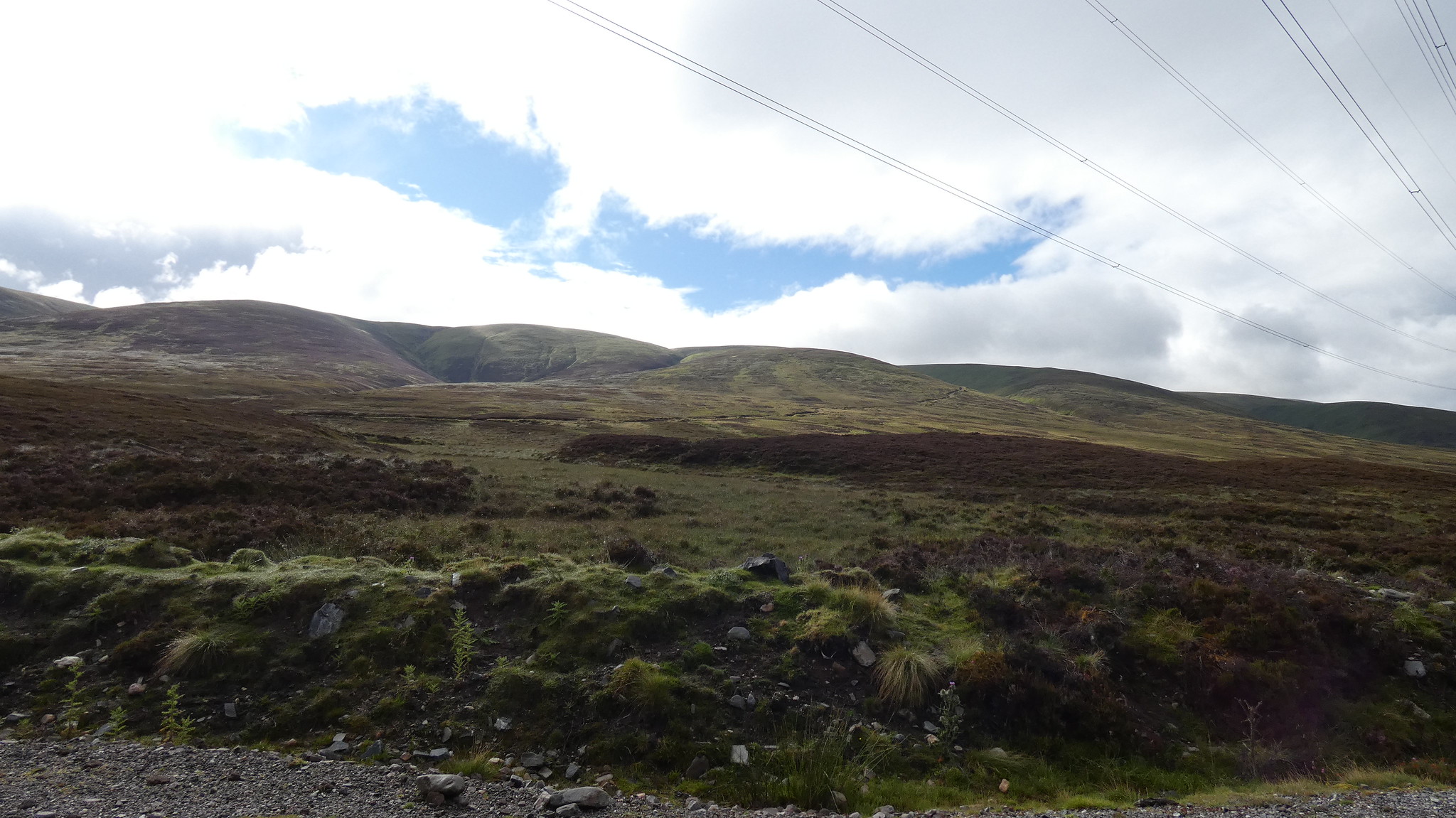 The weather forecast had been promising - mostly clear with some high cloud and some sunshine. Once on the track and climbing up some blue skies began to appear and the sun popped out, so I stopped to slap on some sun cream and get the sun glasses out - this would prove to be a bit of a waste of time! 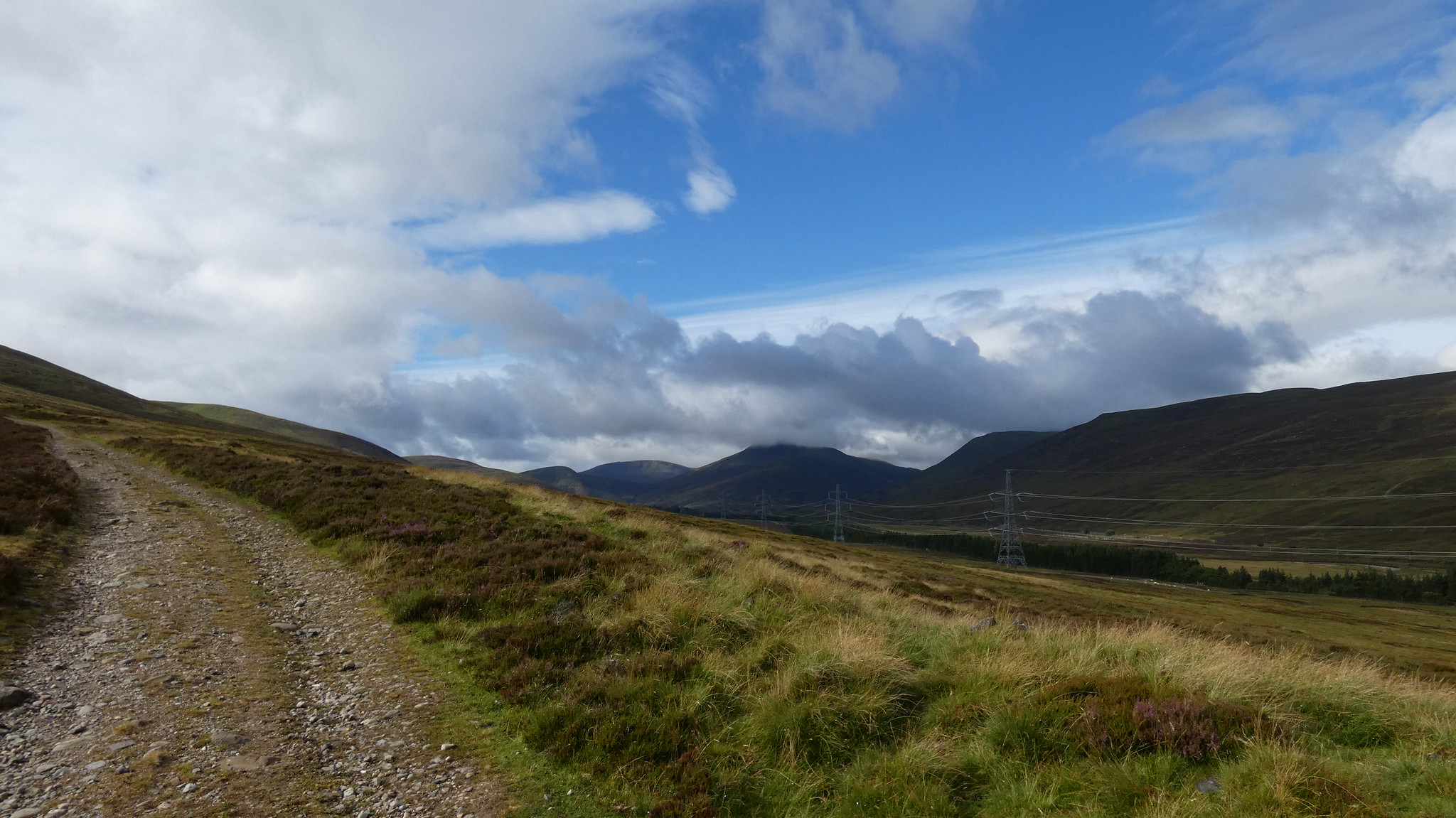 During this initial climb up the track there is the constant hum of the traffic on the A9 in the background, but there are some nice views of Dalwhinnie and the surrounding hills - except they were mostly shrouded in cloud. 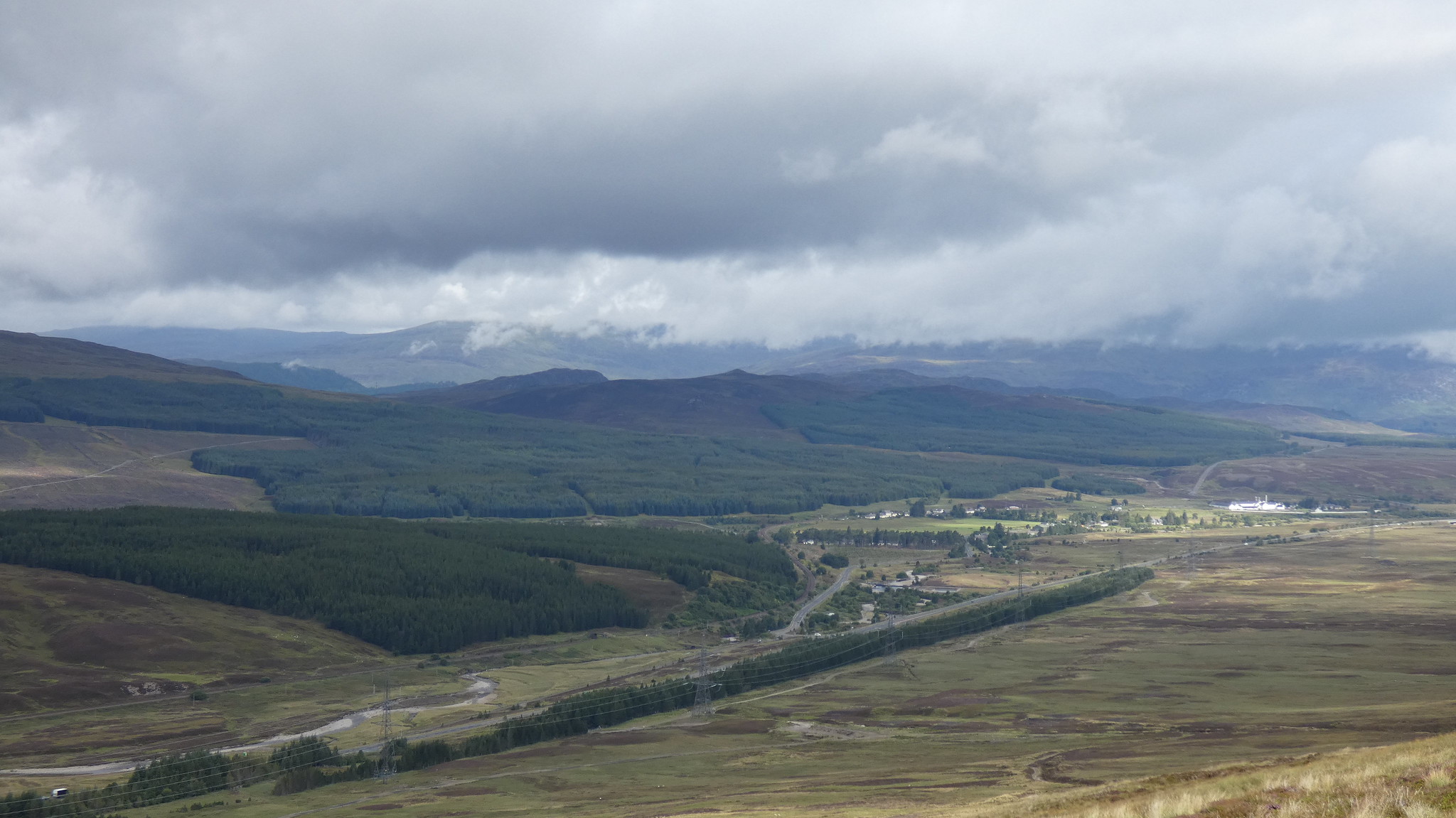 Looking back towards Dalwhinnie

Apropos of nothing - check out the zoom on my camera! 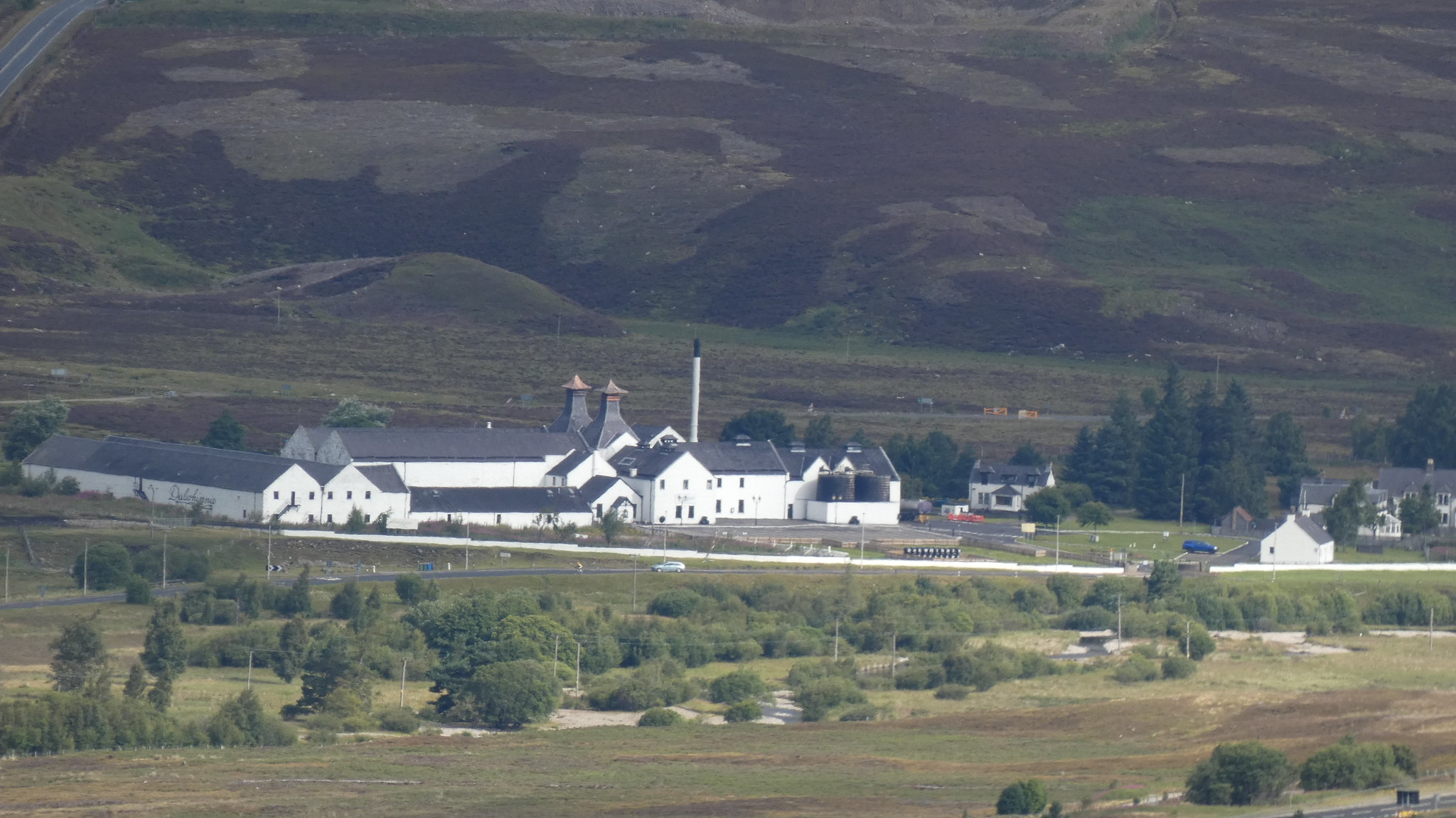 After about 90 mins of huffing and puffing I reached the plateau and the point at which you have to decide which hill to tackle first. I decided to turn left and head for Carn na Caim. 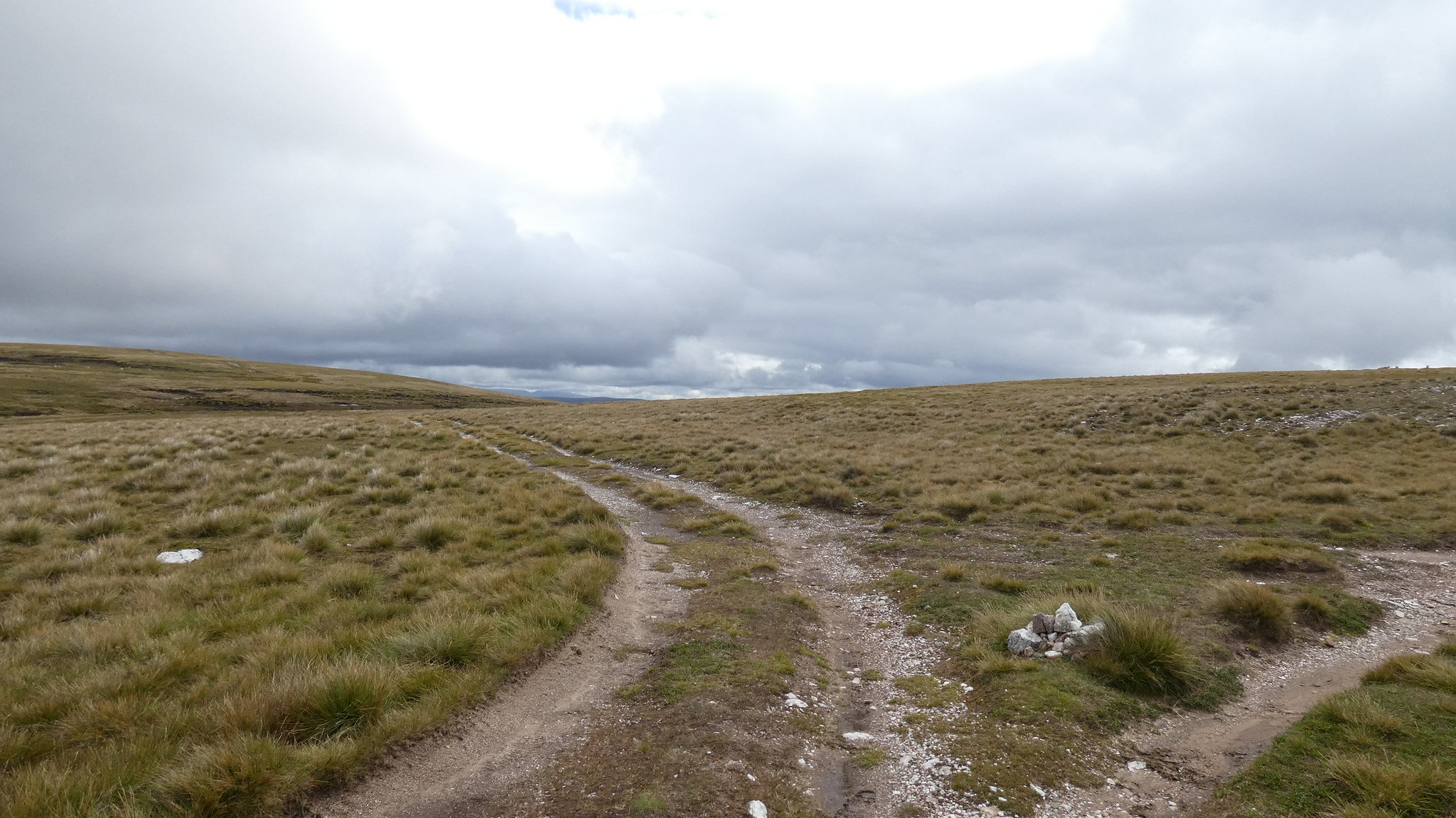 The walk across the plateau to Carn na Caim is very straightforward and easy going - pretty flat mostly and the track leads you most of the way. Unfortunately the weather turned at this point and the mist and drizzle turned up, meaning I had my head down when I should have been looking out for the line of fence posts that lead to the summit. As a result I had a bit of a wander before establishing which indistinguishable lump in the mist I should be heading for. I eventually reached the summit about an hour from the "crossroads". 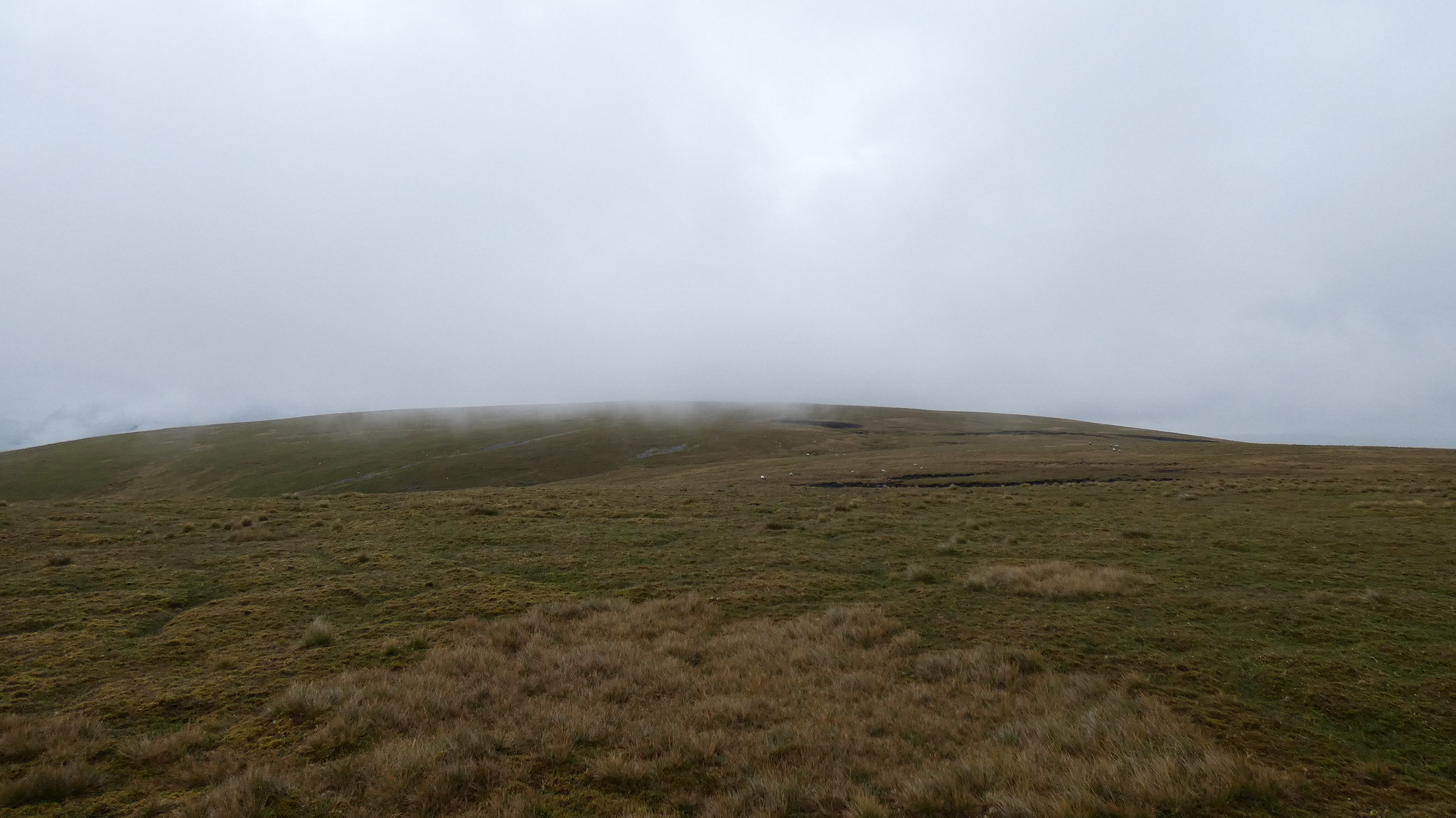 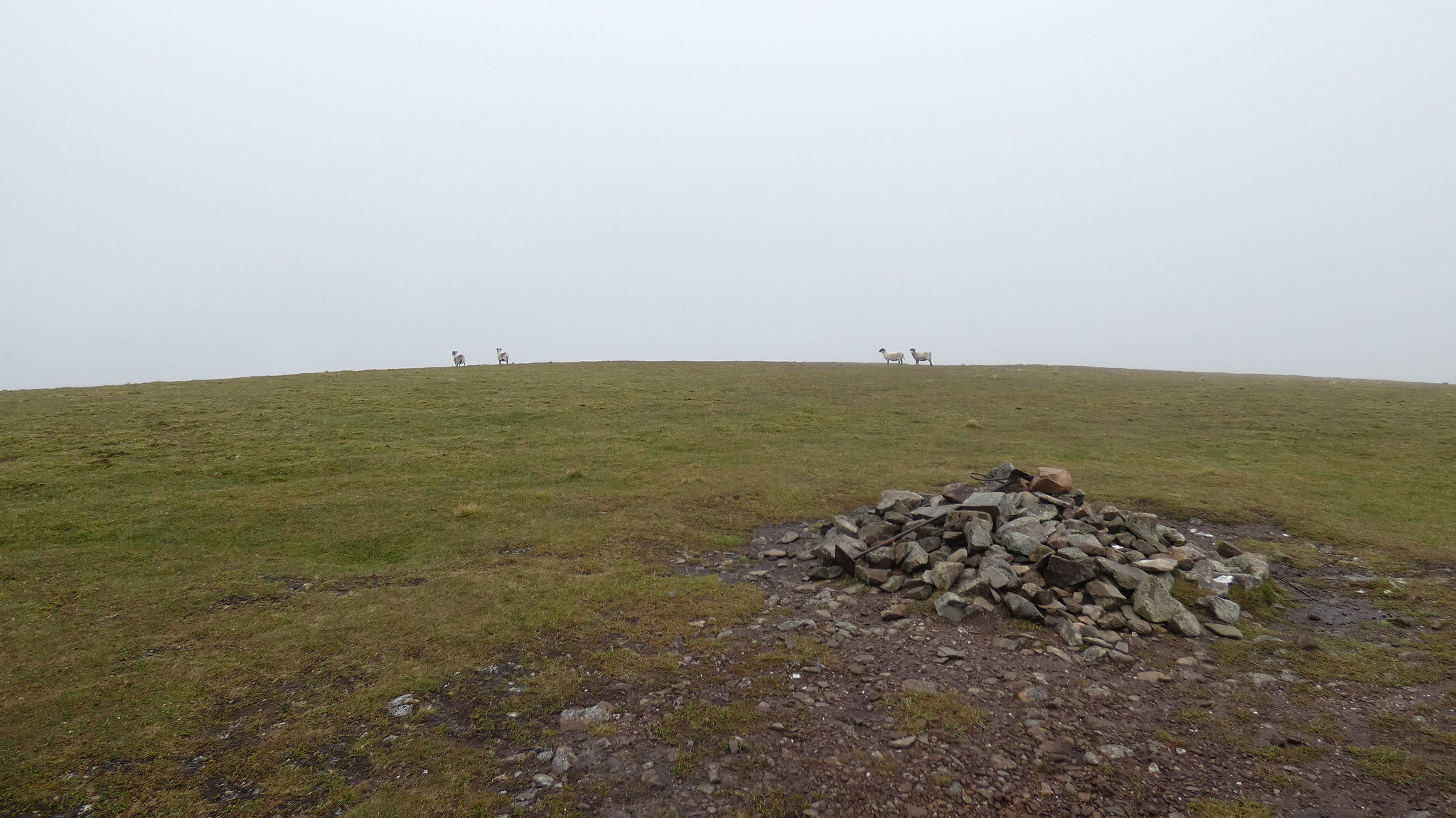 Occasionally the mist parted to allow the odd glimpse of a view. 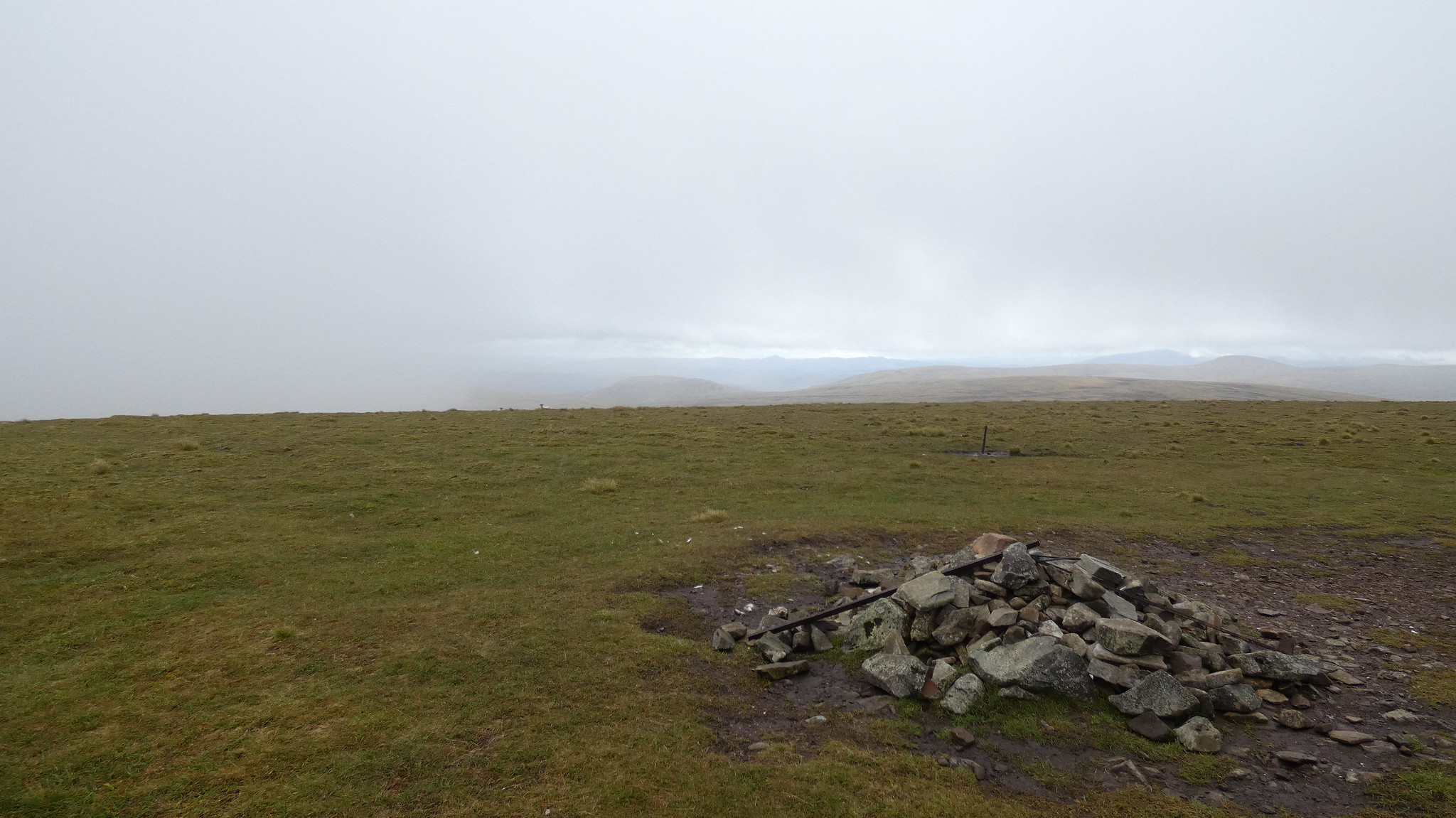 "View" from the summit

The weather didn't really invite hanging around, so I wandered off the summit - initially in the wrong direction - and re-traced my steps back to the crossroads, this time heading off in the direction of A' Bhuidheanach Bheag.

This leg is a much tougher proposition, with plenty of energy-sapping ups and downs to deal with. Look out for a gleaming white cairn made of quartz that marks the spot where you leave the main track and head downhill initially towards A' Bhuidheanach Bheag. 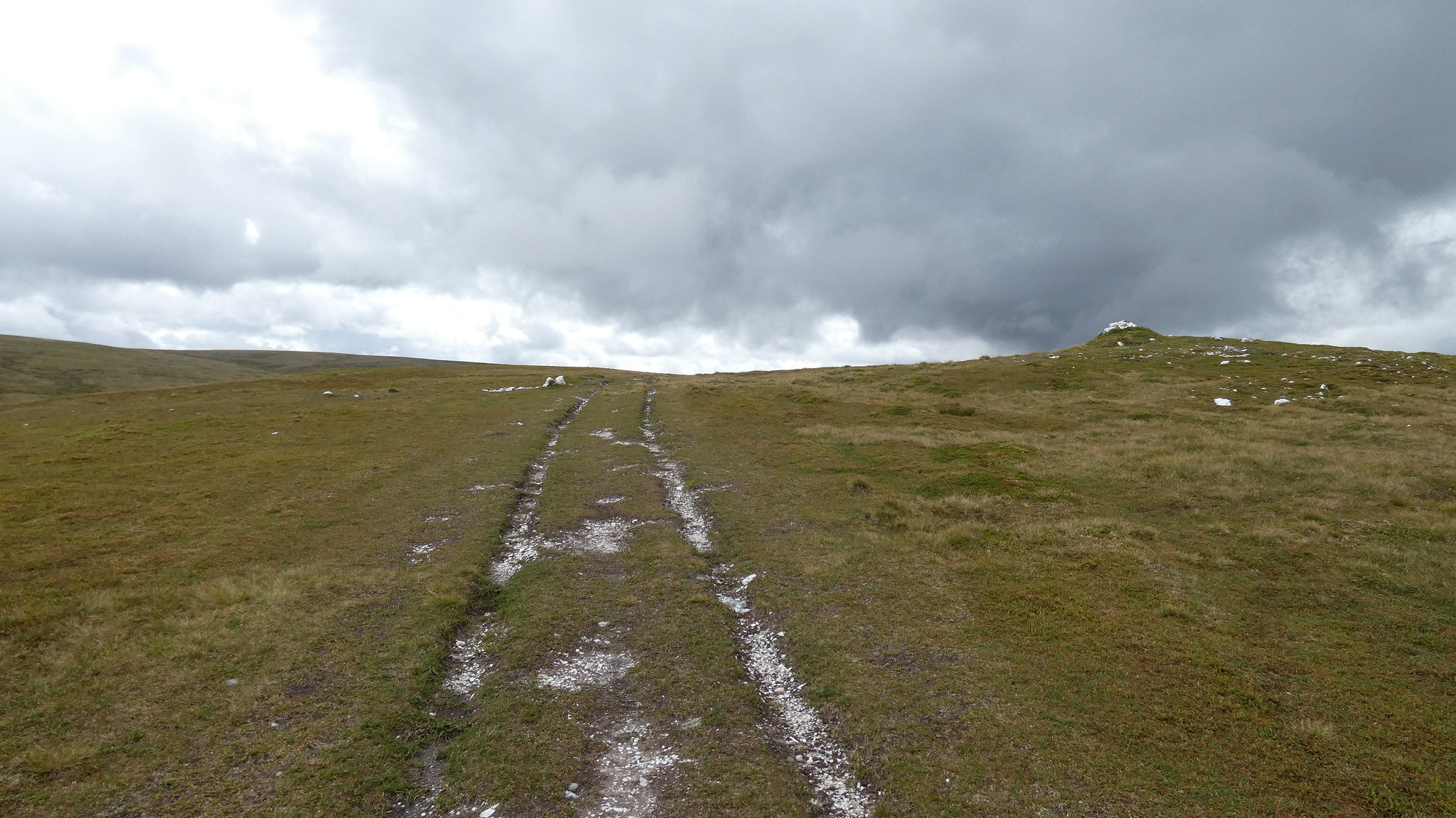 Cairn marks the spot you leave the track

I decided this was as good a spot as any to stop for some lunch - the weather had cleared up a bit and there were a few rocks around to sit on. Suitably refreshed it was time to start the final push. Some kind soul has fashioned a big white arrow out of quartz rocks to point the way. 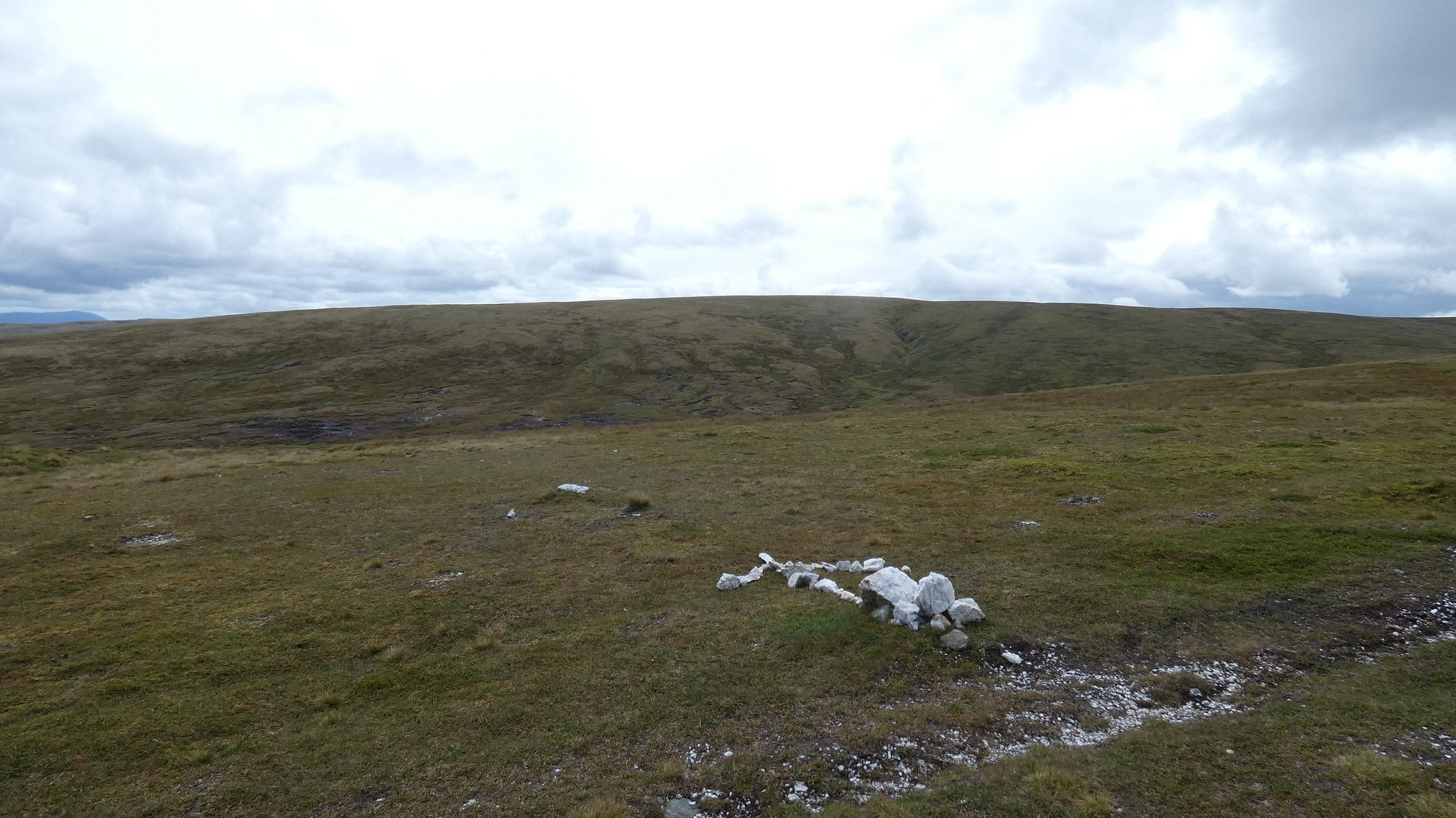 Arrow pointing the way to A' Bhuidheanach Bheag

The track/path is pretty clear almost all the way to the summit - just petering out a bit towards the end, but by that time the summit with its trig point was clearly visible. 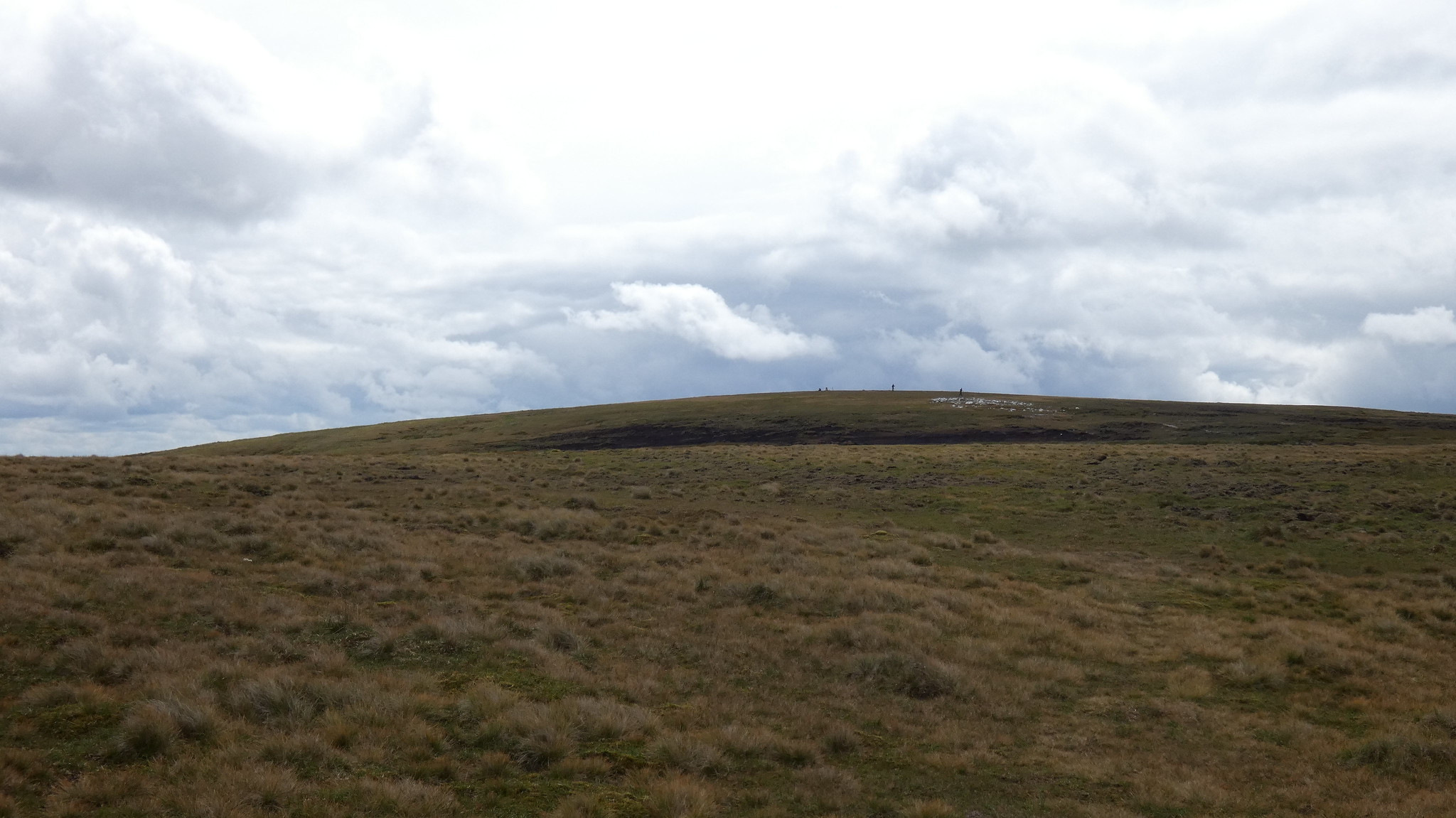 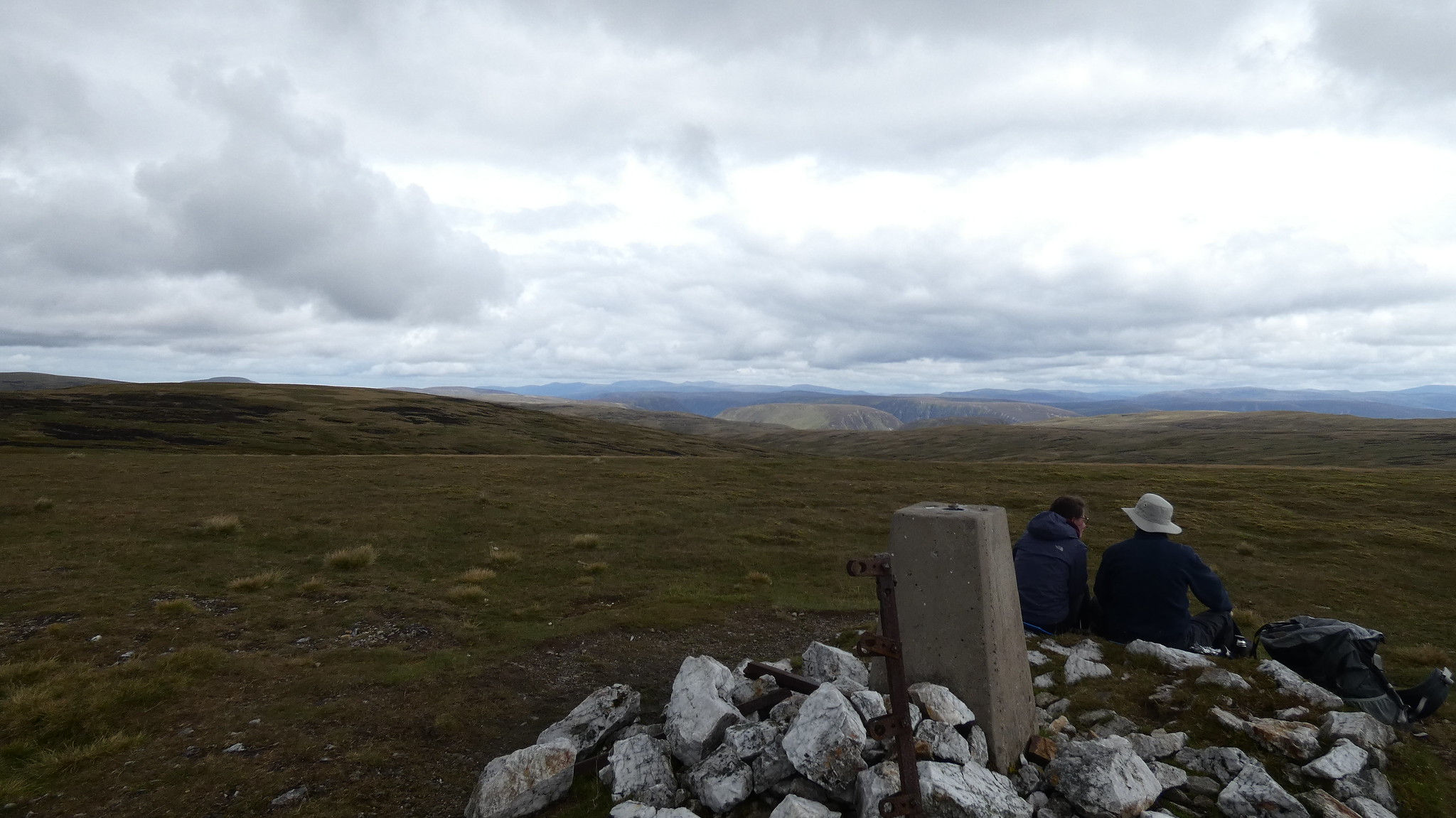 There are some nice views to be had if the weather is playing ball. 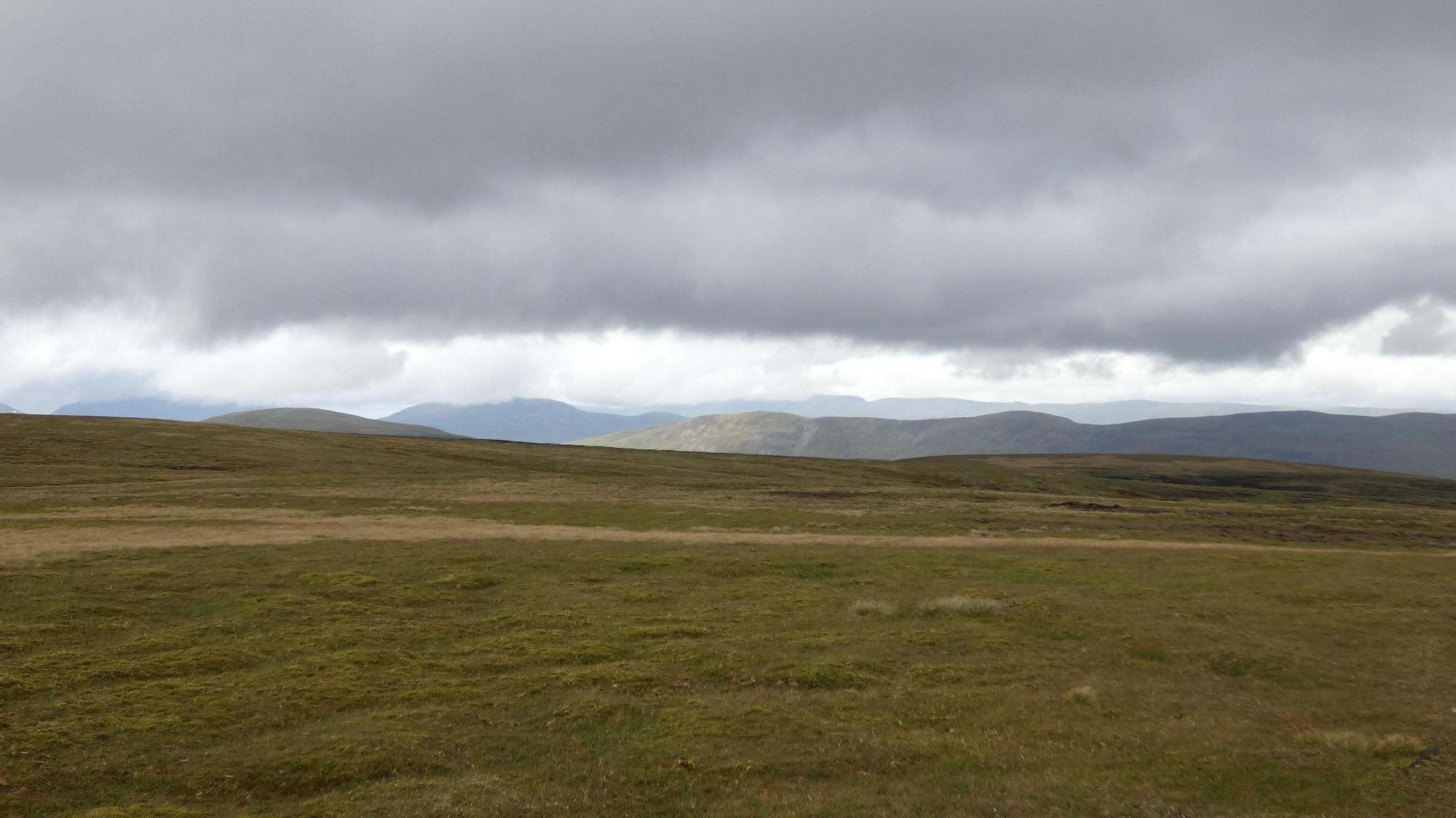 So from here it's just a matter of retracing your steps back to the crossroads and heading back down the track to the A9. All the ups and downs that were on the approach to A' Bhuidheanach Bheag are still there of course, and by now starting to get really annoying! Once on the downward track though it doesn't take long to get back to the starting point. 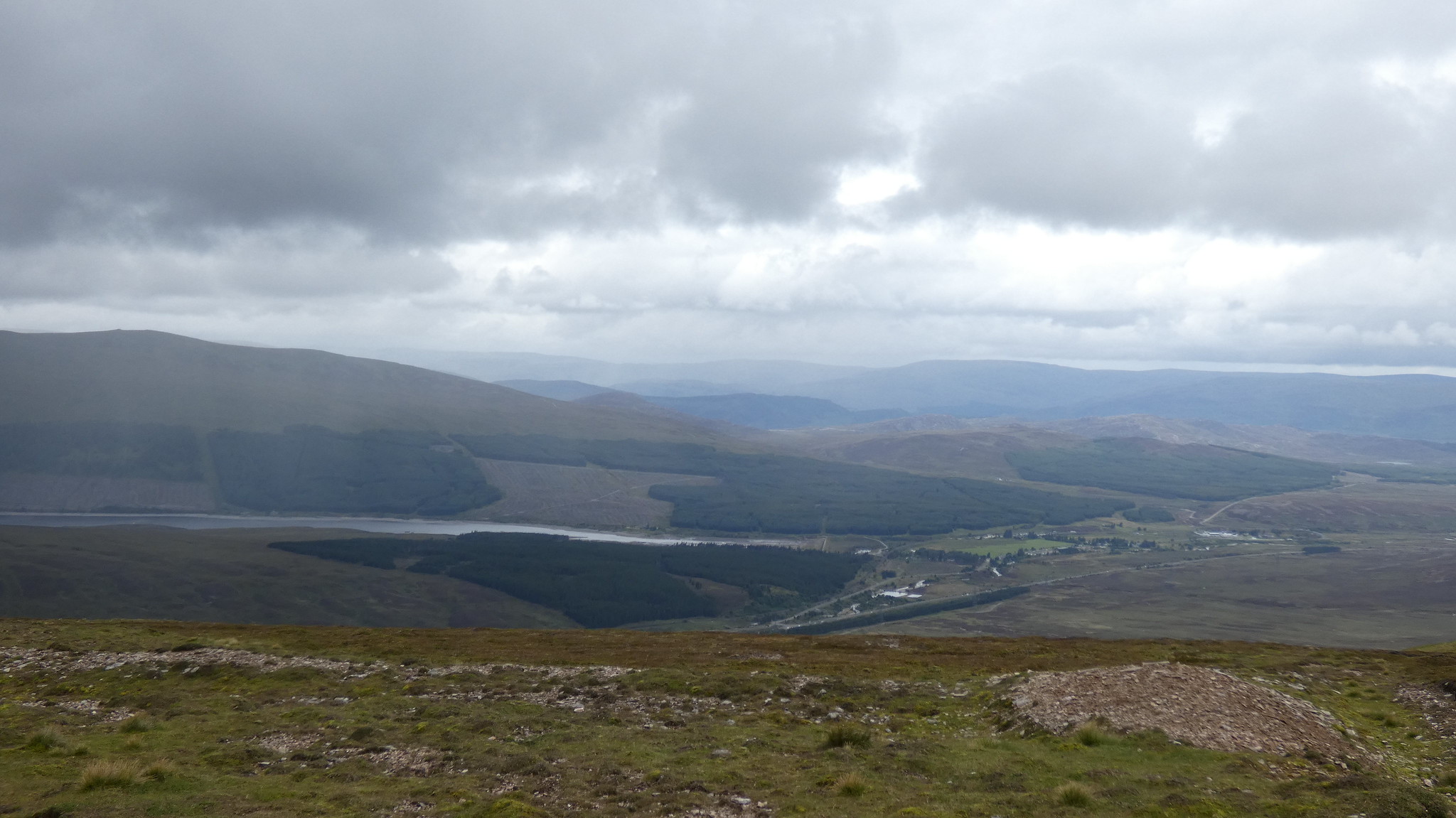 Dalwhinnie with Loch Ericht behind

On reflection I wish I'd done A' Bhuidheanach Bheag first and got it out of the way. Neither hill is going to set your pulse racing, but it was good to get these two under my belt - and they look like they're a good bet if you want to avoid the current crowds at the more popular hills. I think I saw maybe five or six other people all day.