Weather looking good, set off from Turra at 6:30 and made it to a very full Linn of Dee car park about 8:30. John arrived soon after to get what seemed to be the last space. After a bit of faffing getting ready we were off on the bikes to Derry Lodge.

It was warm on the path out of the wind and we passed quite a few people walking in. The views of the mountains we were targeting were great to get the excitement up (first Munros since November).

Took about 25 minutes at a leisurely pace to get to Derry Lodge on the bikes, where we locked them up. Crossed the boggy bit and soon caught the path to the Lui crossing. It was getting quite warm and I did nearly take us up to the Lui bridge before realising we shouldn't have turned off. Flies were rife in the copse before the crossing but we were soon at it. The crossing itself wasn't too bad and while refreshing for the feet was only up to mid shin. 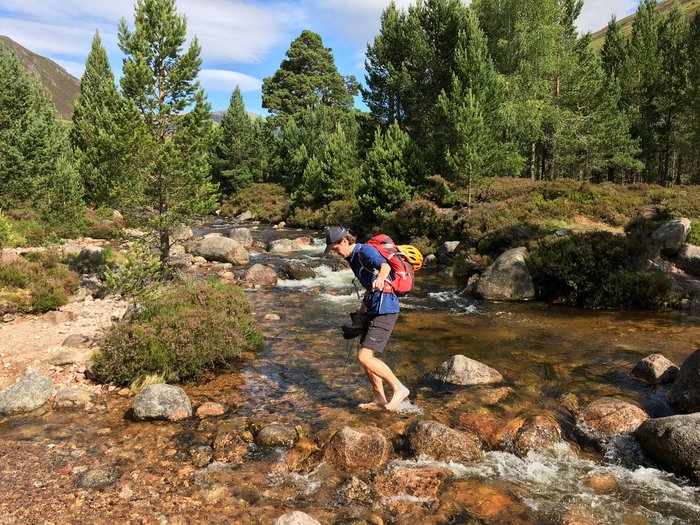 As we were getting our feet dry and boots back on we watched a dad ferry his young family's gear across. Hope they gave him hero status.

From here the climb to Carn a'Mhaim started. It was only about 600m up to the summit and with a good path it didn't feel too steep. The summit was busier than I have seen for a long time, but plenty of families which is great to see and lots of views towards Macdui and the munros of the Braeriach traverse. After enjoying the sun and some food we set off down the shoulder towards Macdui. Its really fine to have some kind of a ridge even if not too tight, but all too soon we were at the bottom of the Macdui ascent. From here the path disappeared into a boulder field which slowed us down but meant the climb never got too hard and after a while we soon made it up onto Macdui. The summit was packed with lots of people which gave me mixed emotions and a group of lads who were obviously thrilled to have climbed (good one) spent the next 15 minutes inserting f*$% into every sentence (not good) which was a shame with the kids and older people around. We headed off into the more remoter part of the mountain on the way to Derry Cairngorm. This was a good path and a short ascent to reach the rocky summit. We spent time soaking in the last summit before heading off back toward Derry Lodge and then onto Linn of Dee. Great to see John and get back in the hills.

I was admiring some of your route from a small hill to the south the same day. A bit on the warm side for me.but I can see how it would make for a great walk, especially with waiting since November to be on bigger hills.