Blame it all on Malky ;P

Blame it all on Malky ;P


To celebrate the end of lockdown, we picked an easy local Sub2000-er, Creag Loch nan Dearcag. It was one of the hills we always kept in mind as "a quickie in the neighbourhood" in case weather wasn't good enough to bother with anything bigger. We considered different routes and decided to tackle the hill from the south, from Loch Meig dam. And of course, we used Malky's route for our approach, but didn't realize one thing: when he did it, it was December and the slopes were bracken-free. What we encountered, was a forest of bracken about 2 m high, with all kind of dangerous creatures lurking in it (ticks, midges, slow worms, deer...). But let's start from the beginning

Malky's report covers both Creag Loch nan Dearcag and Sgurr Marcasaidh. We intended to traverse the former and then return along Glean Marcasaidh, which we had visited before and we knew it had a good track most of the way up to Loch a'Chairn Dubh:

dearcag.gpx Open full screen  NB: Walkhighlands is not responsible for the accuracy of gpx files in users posts
We parked next to the dam, in a large parking area by a forest gate. The day was quite windy and showers kept passing by, but we were so hill-deprived that we didn't care. The mountains were calling!
View from Loch Meig Dam: 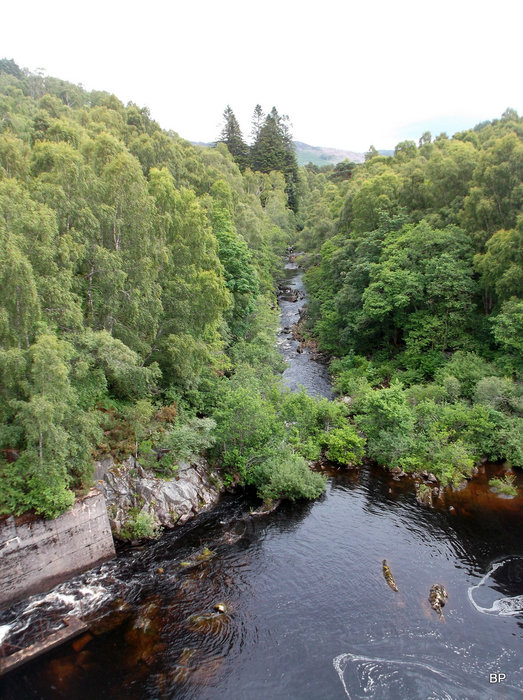 On the other side, we followed the tarmac road east for maybe 0.5km. According to Malky's report:
"It was a fairly steep drop back into Strathconon, but I was able to follow the edge of a wood, then deer tracks all the way to the road"
If he descended along the forest, we could just as well go up this way, we decided and dived into the horrendous jungle. It started raining at this moment so no photos, sadly. We managed to fight the forest of bracken for 10 minutes, we covered maybe 50m. I nearly squashed a slow worm (poor creature saved itself slithering away from under my boot), Kevin was swearing as ticks fell on our heads from the 2m high leafs of bracken. We simply had to give up the idea and look for a different place to start the ascent.
We returned to the tarmac road, flicking ticks from our clothes and scratching our heads. At least the shower had passed, but we felt it wouldn't stay dry for long. We began walking back along the road, but closer to the dam the access was hindered by a deer fence. Thankfully, Kevin spotted a stile, hidden in the overgrown vegetation (at 376561). The stile is next to a locked gate and and there, on a small board we read:
"You are welcome to walk in this forest!"
We climbed the stile and on the other side, we found a strange world which hardly resembles forest. We assumed it's a regeneration project to allow natural mixed woodland to regrow. But at the moment it's still early days: 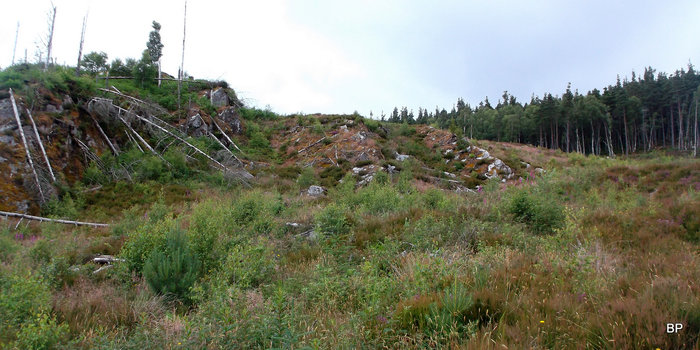 At least this was easier than the jungle we tried earlier on, so we spied a faint ATV track and followed it uphill. The track disappeared at some point but the ground was "in walkable conditions" as I call it sometimes. Having gained about 50m we came across a lonely cairn. I think it's the one marked on 1-25k map as "Pillar": Loch Meig from the pillar: 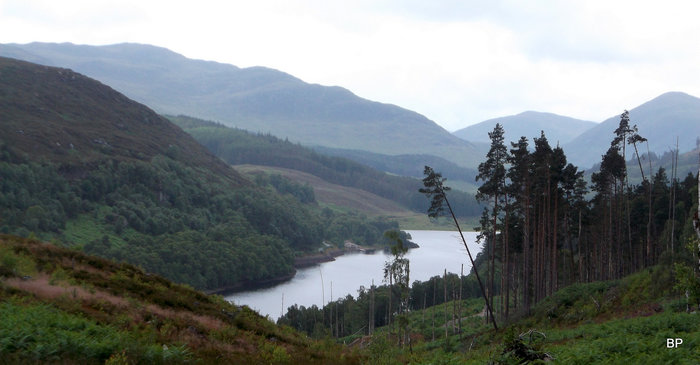 We continued on the heathery ground till we came across the outer perimeter fence, but again, Kevin was good at finding his route and he noticed another stile nearby. On the other side, we had to dive into high bracken again but only for a short time. We picked another faint ATV track, only to leave it soon as it was heading in the wrong direction

We were both annoyed by then, just wanted to get out of this tick infested jungle! Another shower came and went, leaving the vegetation wet and slippery. We gave up on trying to find deer paths (or any paths made by anything bigger than a slow worm) and just charged up the nearest slope that didn't look vertical. It was overgrown but mostly with heather which was easier to tackle than giant bracken. Higher up, we could even hop from rock to rock: Gaining the ridge at about 350m was a huge relief. From now on, walking was so much easier!
View down to Glen Strathconon from the eastern end of the ridge: 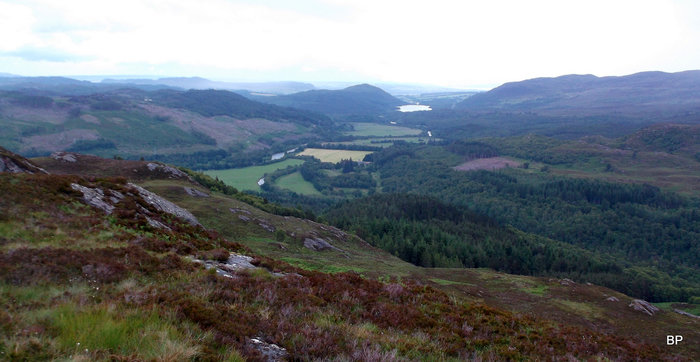 I'd lie if I wrote that the rest of the walk was plain sailing, but we didn't encounter any more challenging vegetation. It was now mostly tussocky grass and moss under our feet, squelchy in places but generally good going. And looking west to the final summit made us jump for joy. This was proper ridge walking! The largest of the group of lochans on the ridge is named Loch na Sgarbh, but it's one of the smaller ones I found the most picturesque:

We continued walking west along the ridge. Apart from a few small peat hags, we didn't encounter any hard terrain.
Looking back east to the group of lochans:

The glen we had in mind for descent:

Kevin was desperately looking for something to scramble up, no luck today

Showers were boiling up everywhere:

Carn a'Mhearlaich, the eastern top of Creag Loch nan Dearcag, is marked with a small cairn: After a short snack break on the eastern top, we headed for the main summit: Looking north with Loch nan Dearcag to the left hand side of the photo. The Fannichs are still hidden in clag. Not a good day for big hills...

Looking back along the ridge to Carn a'Mhearlaich: Kevin left me behind as he charged for the summit:

Panther on the final approach to Creag Loch nan Dearcag, another heavy shower behind:

The summit doesn't have any significant features apart form a tiny cairn. On a clear day, this would be a superb viewpoint but even with limited visibility we had due to showers and cloud, we still liked what we saw

We were indeed lucky as we caught a short dry spell on the top, even the sun was out if only for a few minutes!
Our 48th Sub and hopefully back on the hills for good! Meallan nan Uan and Sgurr a Mhuilinn are just up the glen:

More views from the summit: To descend into Glean Marcasaidh, we first dropped to Loch nan Dearcag. It is not possible straight from the top due to nearly vertical crags above the loch, but after traversing a bit further along the ridge, we picked an easier line on the heathery slopes: Back up our descent route, it looks overgrown but by then we were already resistant to scratchy heather From the loch, we followed the edge of the forest, descending on wet-ish ground into Glean Marcasaidh: Allt a'Ghlinne could be a potential problem in spate but we found a good set of stepping stones. Honestly, you could probably pole-vault over it if desperate To gain the track in the glen, we had to cross two deer fences. The upper one has a gate (seen here in the middle of the picture) but the lower one had to be climbed. So clambering over the fence was the only technical part of this route As we landed on the track, another shower arrived, but we were so hyper by now that we hardly noticed. Might have been a small hill compare to some, but it's a nice traverse, despite the bracken bashing adventure we had at the beginning. On the way back to the car we agreed, that only five years ago we never considered climbing Subs, now we were scampering all over them

Well, one gets more addicted as time progresses... But in case of Creag Loch nan Dearcag... It can be blamed all on Malky!

Re: Blame it all on Malky ;P

Black Panther wrote:On the way back to the car we agreed, that only five years ago we never considered climbing Subs, now we were scampering all over them

Scampering is never a word I would use with long bracken, but never mind, you got out.